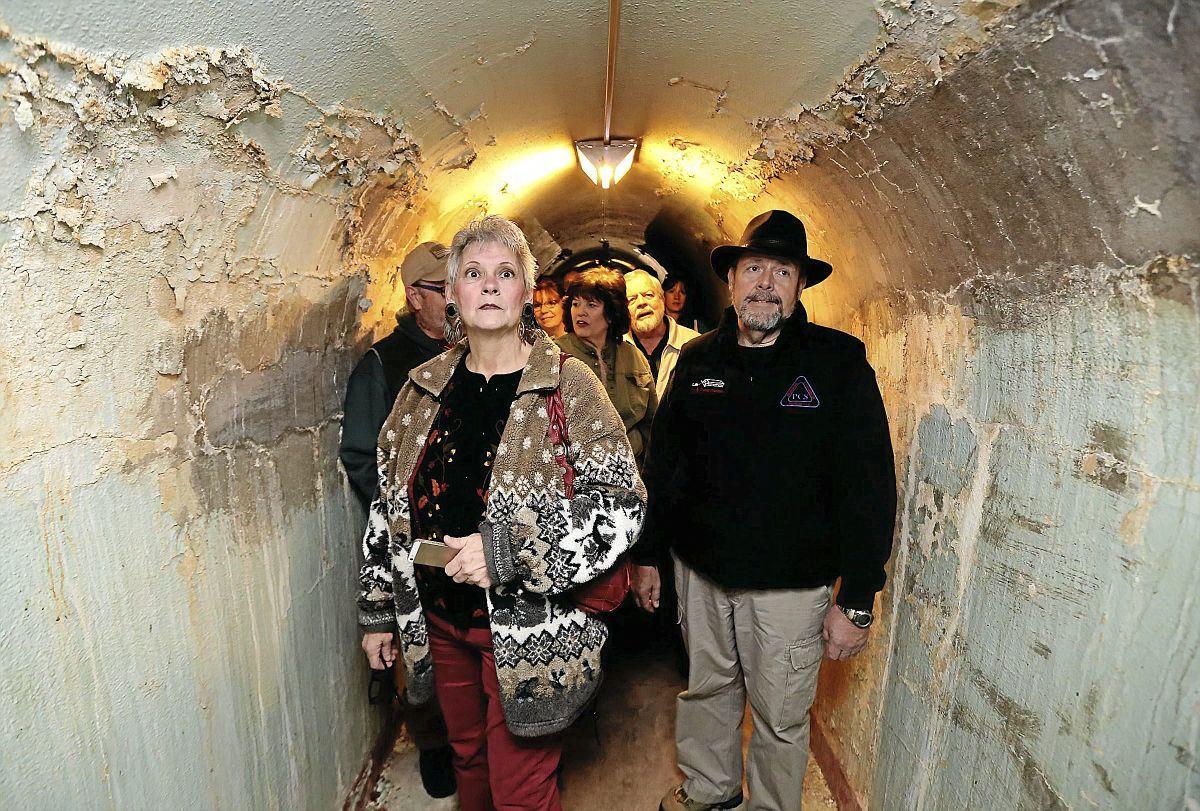 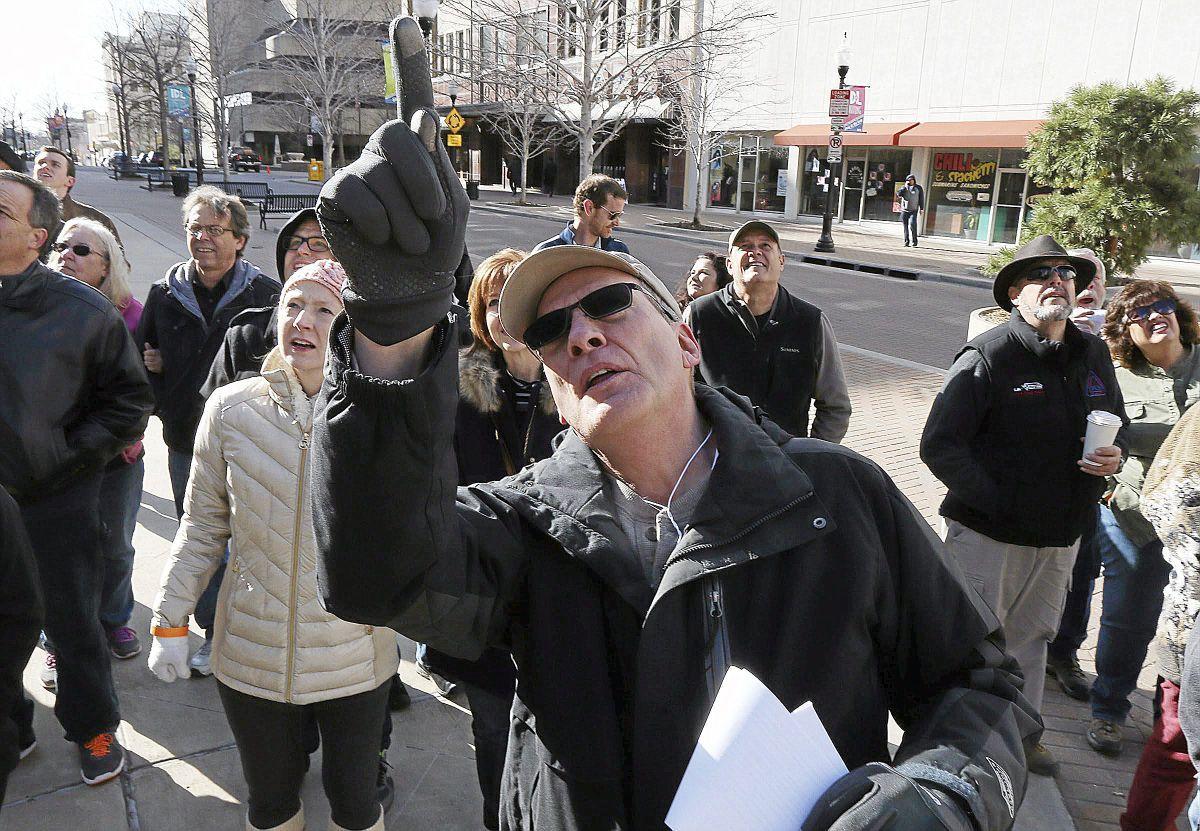 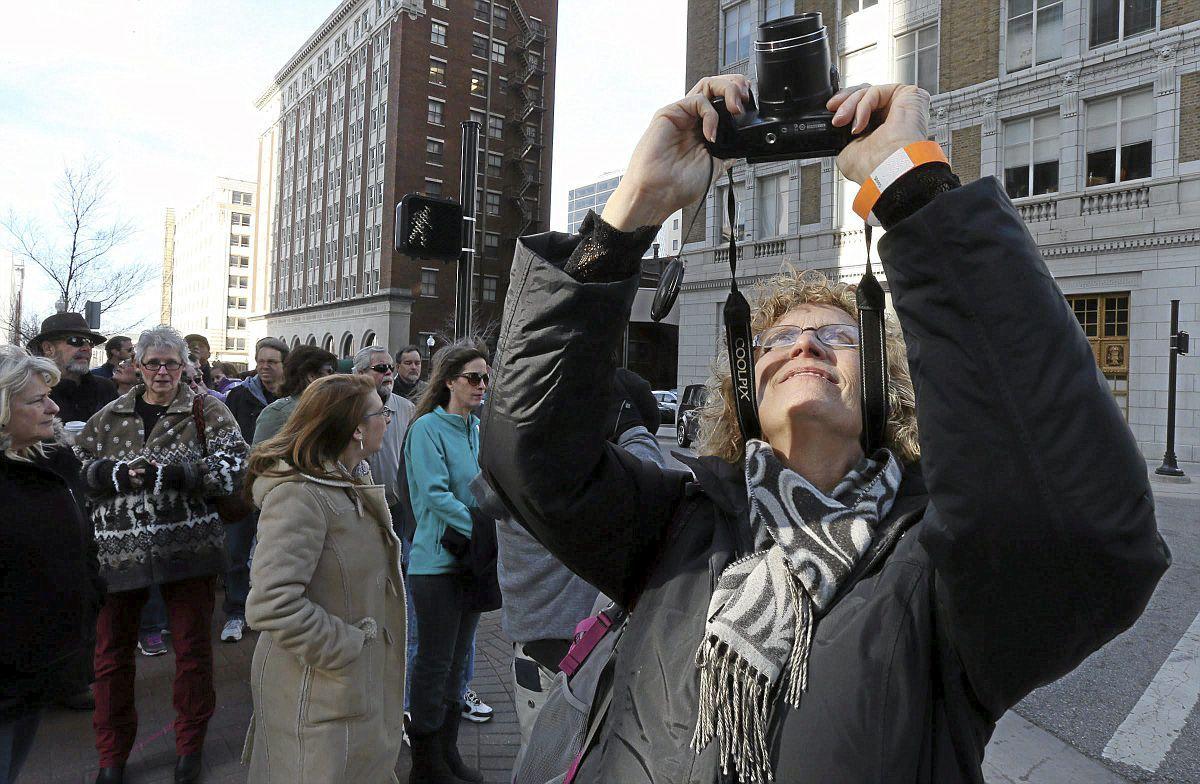 Gail Cohen, of Tulsa, takes a photo of buildings near Fourth and Boston Avenue, during an underground tunnels tour through downtown Tulsa, on Saturday, Feb. 13, 2016. CORY YOUNG/Tulsa World 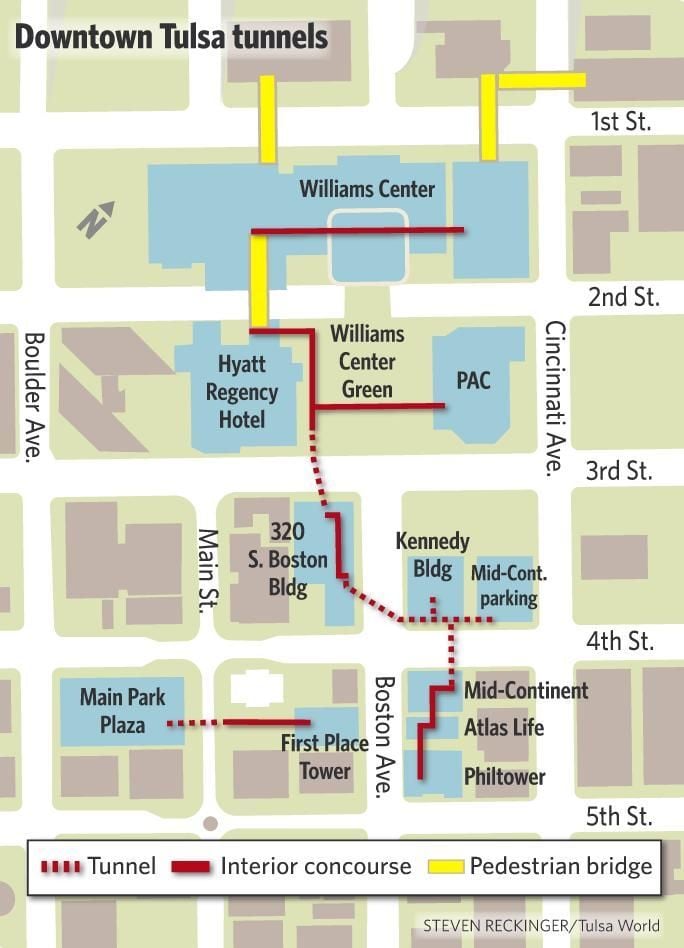 Gail Cohen, of Tulsa, takes a photo of buildings near Fourth and Boston Avenue, during an underground tunnels tour through downtown Tulsa, on Saturday, Feb. 13, 2016. CORY YOUNG/Tulsa World

Correction: This story originally contained an incorrect spelling of oil baron Waite Phillips' last name. It has been corrected.

At least 900 people descended below downtown Tulsa’s streets Saturday morning to tour the underground tunnels that connect many of the city’s early skyscrapers.

The tour groups, capped at about 40 people each trip, traversed downtown Tulsa beginning about 9:30 a.m. They started at The Mayo Hotel at South Cheyenne Avenue and East Fifth Street before walking to the 320 South Boston Building where they went underground.

Tour stops included the Mid-Continent Tower, the Atlas Life Building and the Philtower Building. Once guests went underground, they didn’t resurface until the tour ended at the Philcade Tower.

When the Tulsa Foundation for Architecture first began its Second Saturday tours, typically about 30 to 40 people would attend. Recently, those numbers have grown to about 100 per tour, said Colette Walker, a sales manager at Holiday Inn in downtown who also gives tours for the foundation.

At least 1,400 sent RSVPs through Facebook, prompting DeCort to use an electronic ticket management system and limit the tour to about 900 people, she said.

Walker attributed the interest in the tunnels to their intrigue, especially for those who don’t spend much time downtown.

A crowd favorite is a cramped, U-shaped tunnel that connects the Philcade and Philtower buildings.

The tunnel is locked behind a heavy, white metal door that opens using a series of weights and chain pulleys. Inside, the walls are bare with peeling paint. The ceiling, at its peak, is about 6 feet high.

Rumor has it that oil baron Waite Phillips, for whom both buildings were built and named, used the tunnels to safely cross between the two sites at a time when kidnappings of wealthy businessmen were on the rise.

Both the tunnel’s creepy facade and historical connection, Walker believes, draws people to it.

“I think it takes Tulsa and links it to something most people hear about in history,” Walker said.

The 80-foot tunnel sparked Dave and Callie Burlin’s curiosity during Saturday’s tour. Callie Burlin said she enjoyed going through that tunnel because it’s one of the few not normally open to the public.

“It’s just really fun to learn about Tulsa and about the oil industry and where we started,” she said.

Part of what sets the tunnel tours apart from some of the other architecture tours through the foundation is that attendees get to spend time inside the buildings, Walker said.

Which means they can see the ornate, carved ceiling inside the Philtower Building or the bank vault inside 320 South Boston Building — and learn how they got there.

“This tour’s fun because it’s not just about the tunnels. You’re going to get a lot of architecture, a lot of history,” DeCort said.

Overall, Walker said she hopes people take what they want from the tours, whether it be a new appreciation for a building’s aesthetic or a better understanding of how its construction meshes with Tulsa’s growth as an oil town.

She also hopes people will realize what Tulsa has to offer with its older buildings and what the city has lost through the demolition of some.

“It’s not just about the buildings, per se. It involves jobs, residences, places to live, small businesses,” Walker said.

The next Tulsa tunnel tour will take place on Aug. 13.