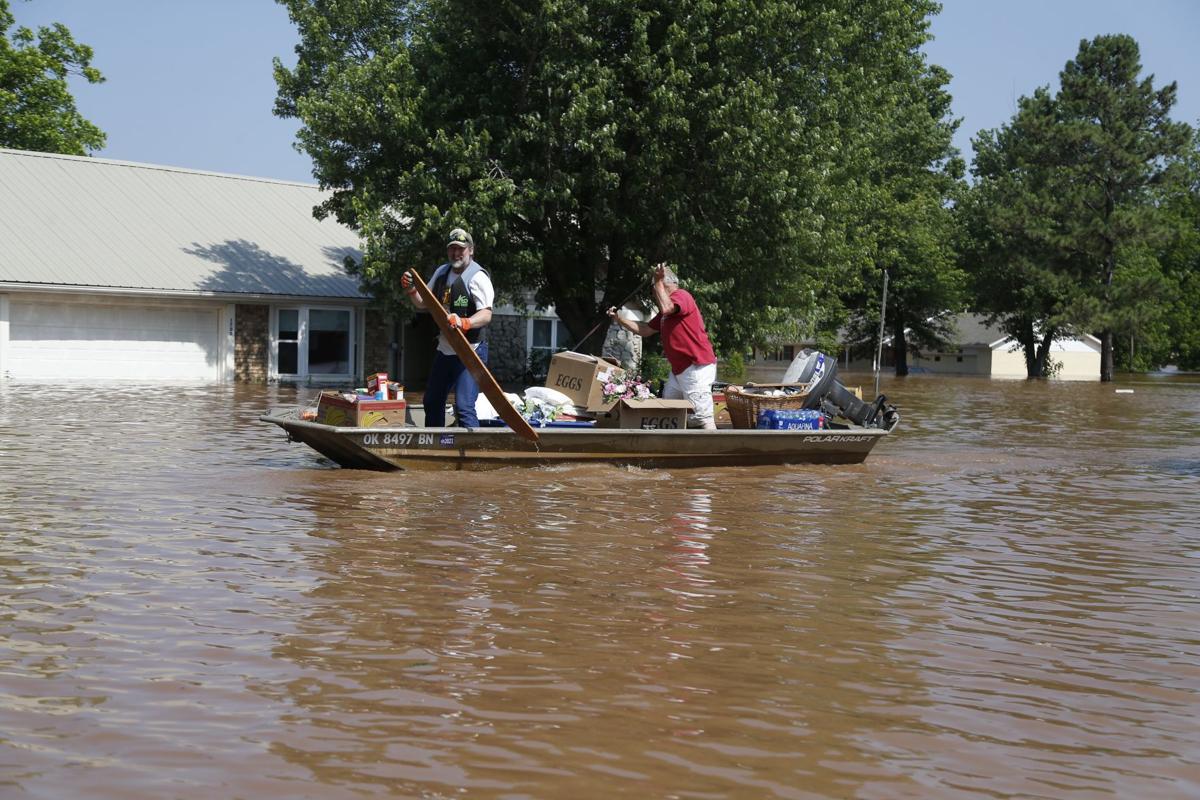 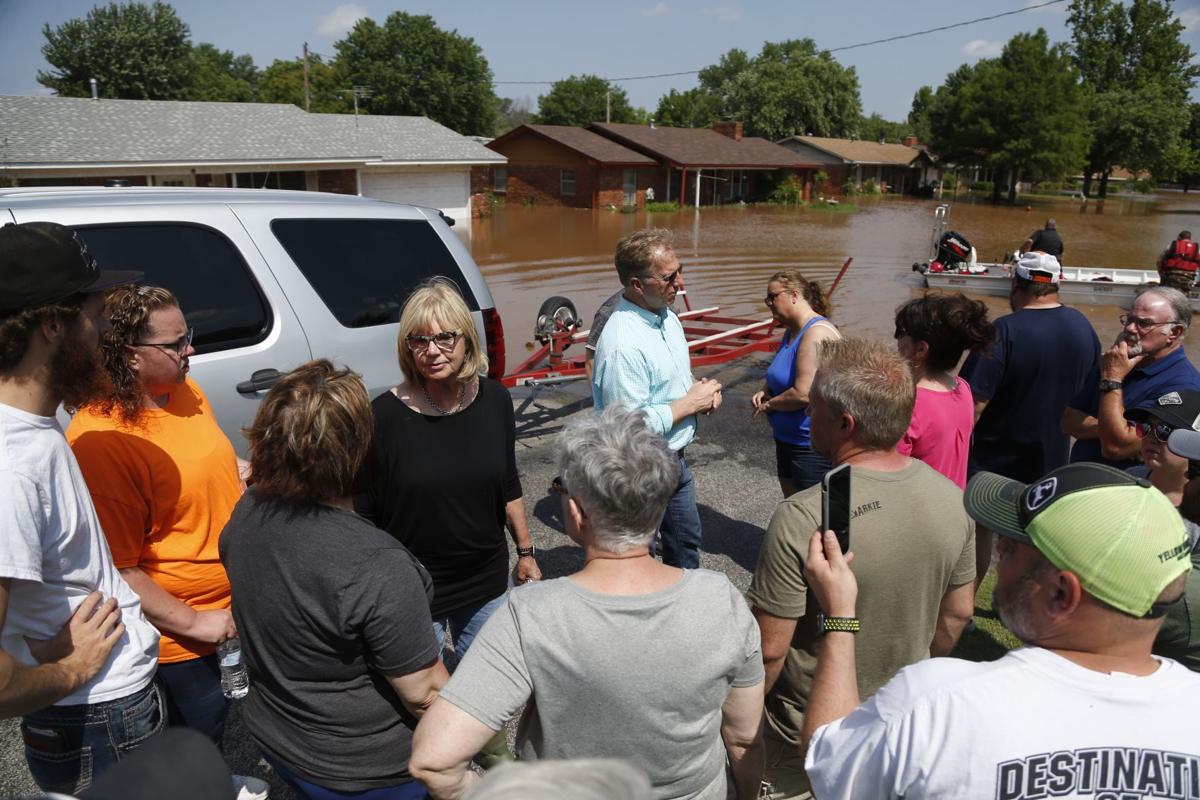 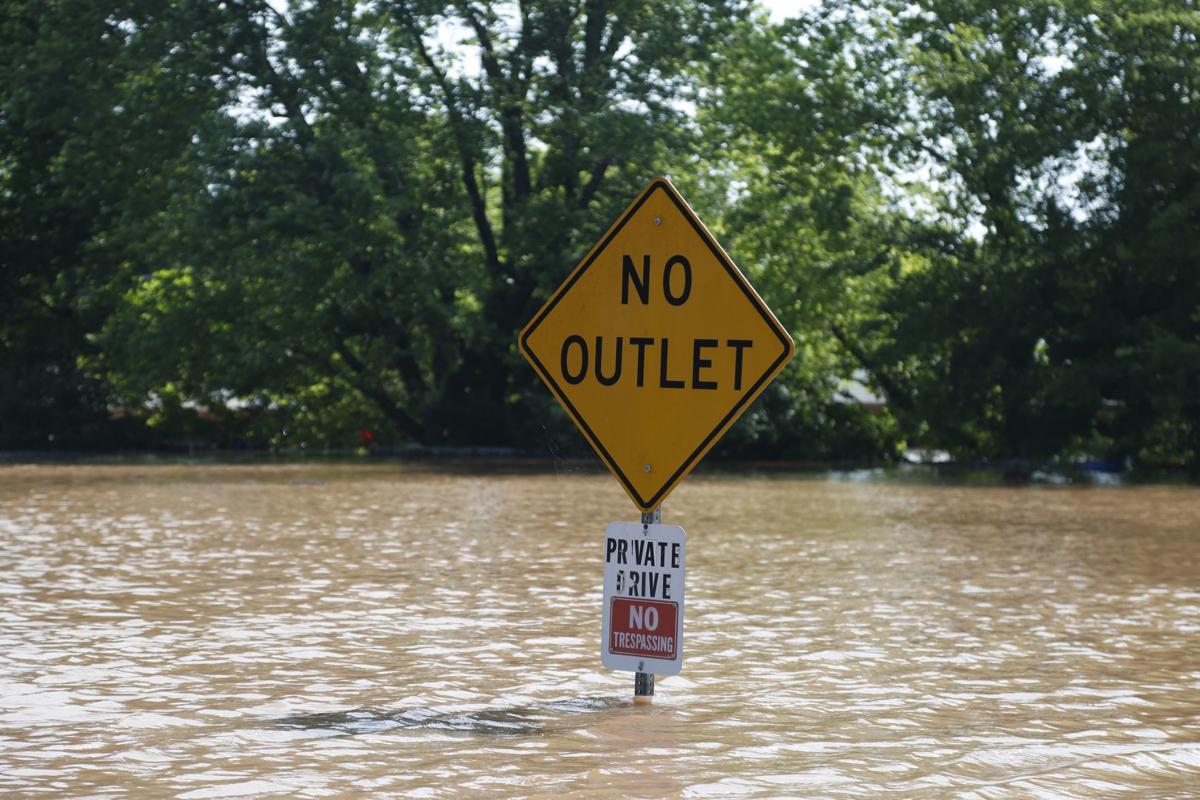 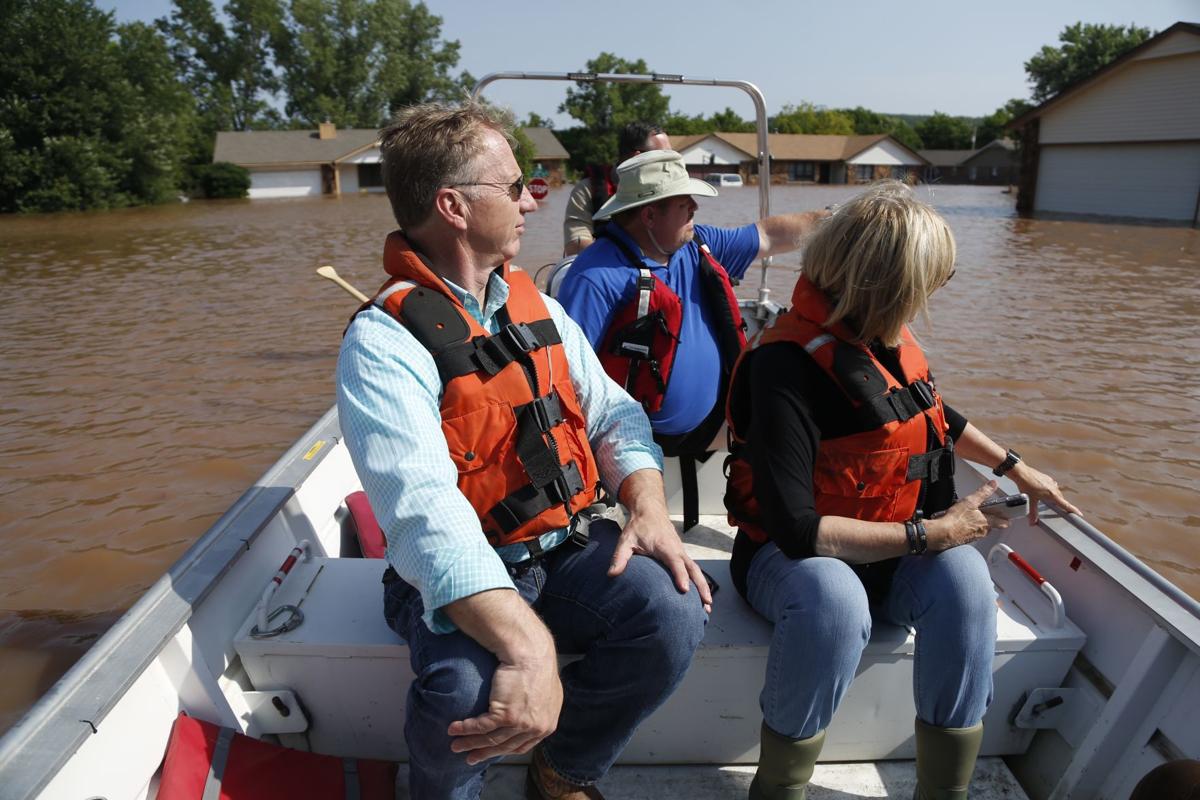 Residents of the Town and Country addition west of Sand Springs on Monday accused government officials of failing to give them proper warning of potential flooding.

Hundreds of homes in the neighborhood are under water, with more expected to be flooded as the release from Keystone Dam increased from 255,000 to 275,000 cubic feet per second Monday.

Janet Cisco said she has several feet of water on her 2-acre property.

“They didn’t evacuate. They didn’t tell us soon enough,” Cisco said. “They have been lying to us all along about how much water is coming out.”

The flooding along the Arkansas River has led to evacuations, and even more homes are at risk. Workers are scrambling to protect them as they try to keep a 70-year-old levee system intact.

Those efforts included a National Guard helicopter Monday afternoon and evening. The chopper was hauling massive sand bags in an effort to repair a spot in a levee at 49th West Avenue near Charles Page Boulevard west of downtown Tulsa. Water had not breached the levee, officials said.

Instead, officials were attempting to repair an issue known as a sand boil, when water begins bursting through the ground behind a river levee.

“This is a maintenance issue,” said Joe Kralicek, director of the Tulsa Area Emergency Management Agency. “The levee is performing as it’s designed.”

Earlier Monday, officials who visited the Town and Country neighborhood met with Cisco and about 30 other residents and heard their concerns.

When Todd and Lisa Sanders step out their front door on Town and Country Drive, they see rising water filling the street and homes flooding all around them.

They spent Monday placing sandbags around their house and speaking with Tulsa County Commissioner Karen Keith.

“The only reason why we know what is going on is because of our Facebook page,” Lisa Sanders said. “We feel like we’ve been left out, and it’s all about Meadow Valley, because they’re in Sand Springs city limits. We are outside of the city limits, so we’re kind of left hanging.”

The Sanders family and other Town and Country residents said the U.S. Army Corps of Engineers continues to do a poor job of managing water levels in the Arkansas River and in area lakes in anticipation of spring rains.

The Corps also puts too much emphasis on keeping water levels high for boating and business purposes, Lisa Sanders said.

“Well, guess what? There ain’t nobody doing it (recreational boating) now,” she said.

David Williams, chief of hydrology and hydraulic engineering for the Army Corps of Engineers’ Tulsa District, told the Tulsa World on Monday that the agency has worked closely with local officials the past four weeks to keep the public informed about possible flooding downstream.

“We try to give several hours of notice every time we make any change on releases,” Williams said, adding: “I believe we’ve attempted to do that and have done so as much as possible.”

Keystone Dam is operated according to a plan approved by Congress that sets standards for flow rates, reservoir levels and other operational issues, Williams said.

First and foremost, the dam serves to mitigate flooding downstream, he added.

He said it is important to remember that although the dam is designed to mitigate downstream flooding, there is always a level of risk.

“And when you have an event like this, where you have an extraordinary rainfall and you fill all the flood-control storage, the consequence of that is you have to start making releases from the dam,” he said.

Area officials, including Keith and Tulsa Mayor G.T. Bynum, began warning the public on Wednesday to prepare for the worst, saying there were too many variables in play to predict with certainty what would happen.

Keith reiterated that message to Town and Country residents Monday.

“I want to err on the side of worst-case scenario. That’s what I want everybody to think about,” she said.

Keith said the 20-mile-long levee system protecting Sand Springs and west Tulsa continues to hold up, despite having unprecedented levels of water on it for an extended period of time.

“We do have a lot of resources there to help,” she said.

Keith said Town and Country was hit worst by the flooding and that she thinks more could have been done to keep residents there informed.

She said she plans to have a public meeting after the flood to let residents speak directly with FEMA, the Corps, the Sheriff’s Office and other government agencies charged with responding to the crisis.

“You really are the hardest-hit area,” Keith told neighborhood residents. “That is why I want to have this meeting. I want to address those issues.

“The big question they’re asking first is, ‘Why didn’t they know?’” Hern said after touring the flooded neighborhood by boat. “We want to find out how we can do better, especially today. Because these are some of the same concerns I heard from 1986 (flooding).”