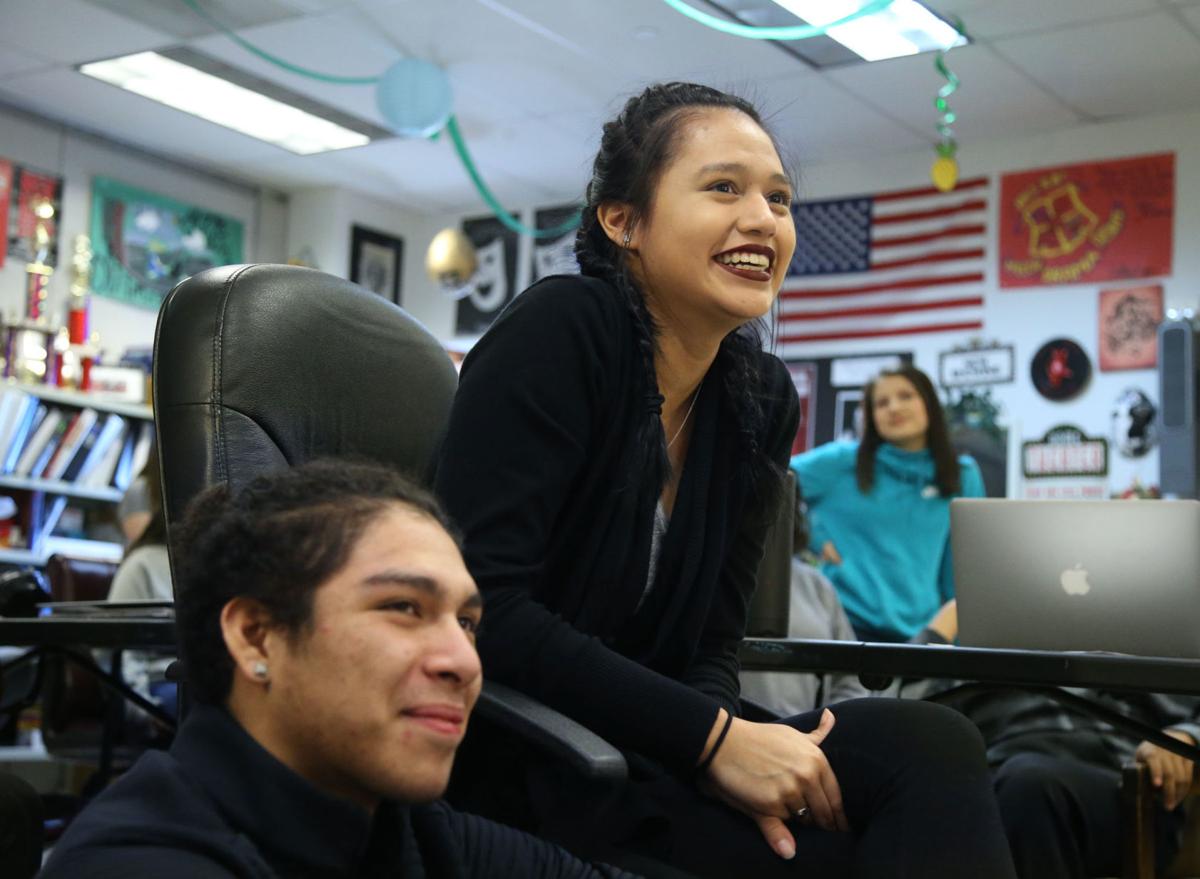 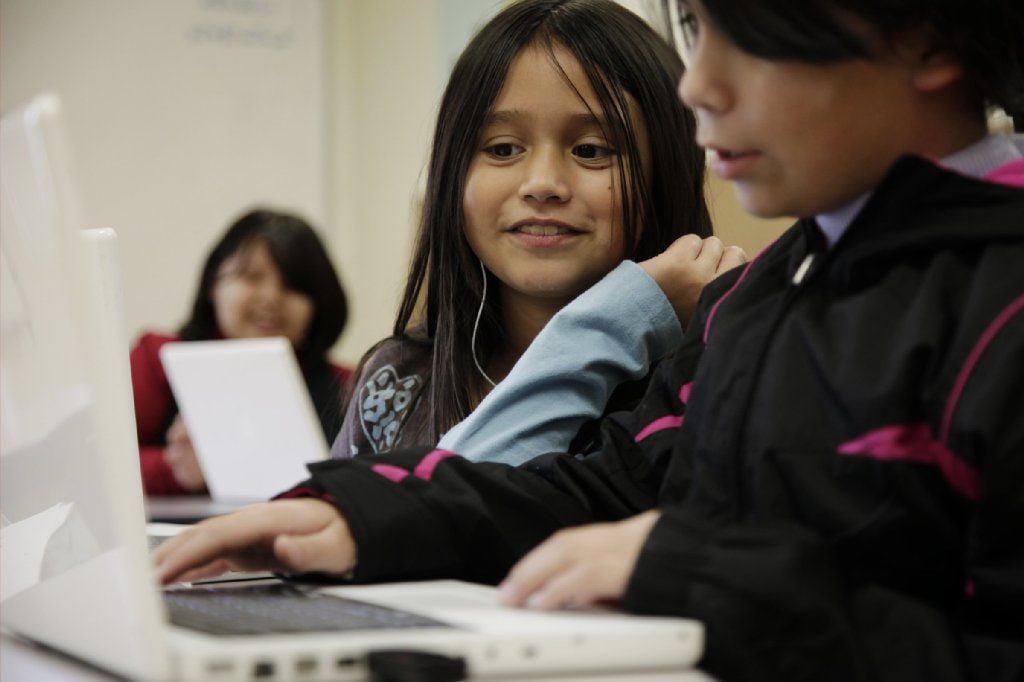 In 2010, when they were 9, Cherokee immersion students Lauren Hummingbird (left) and Emilee Chavez used new Cherokee language keypads to work on their laptops. Tulsa World file 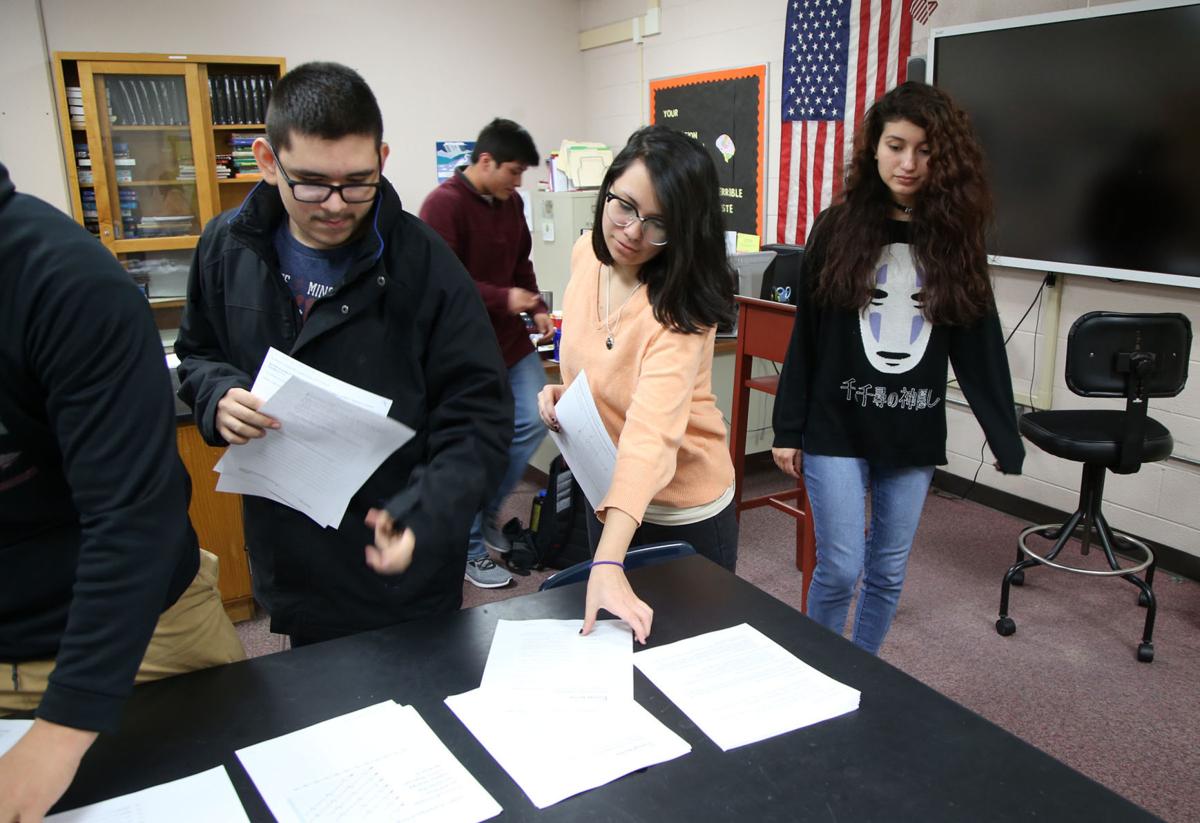 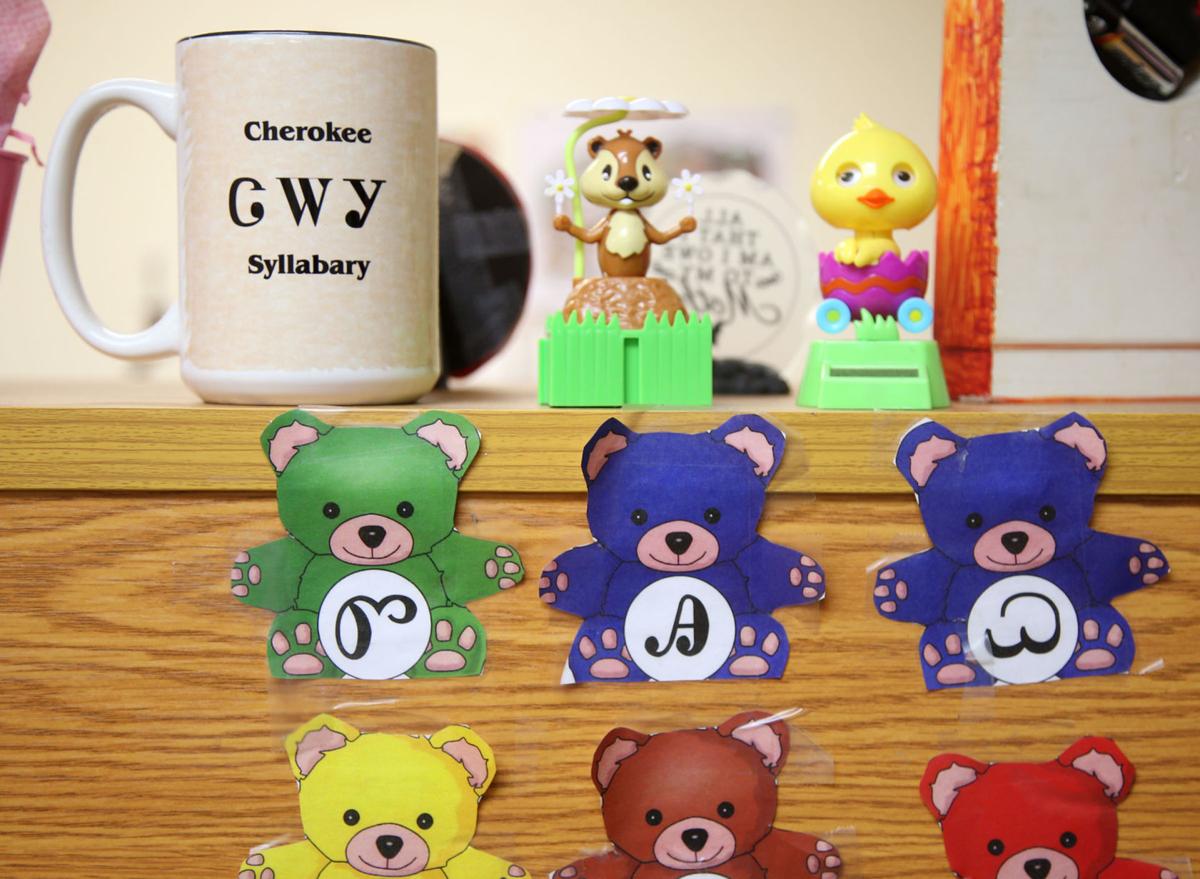 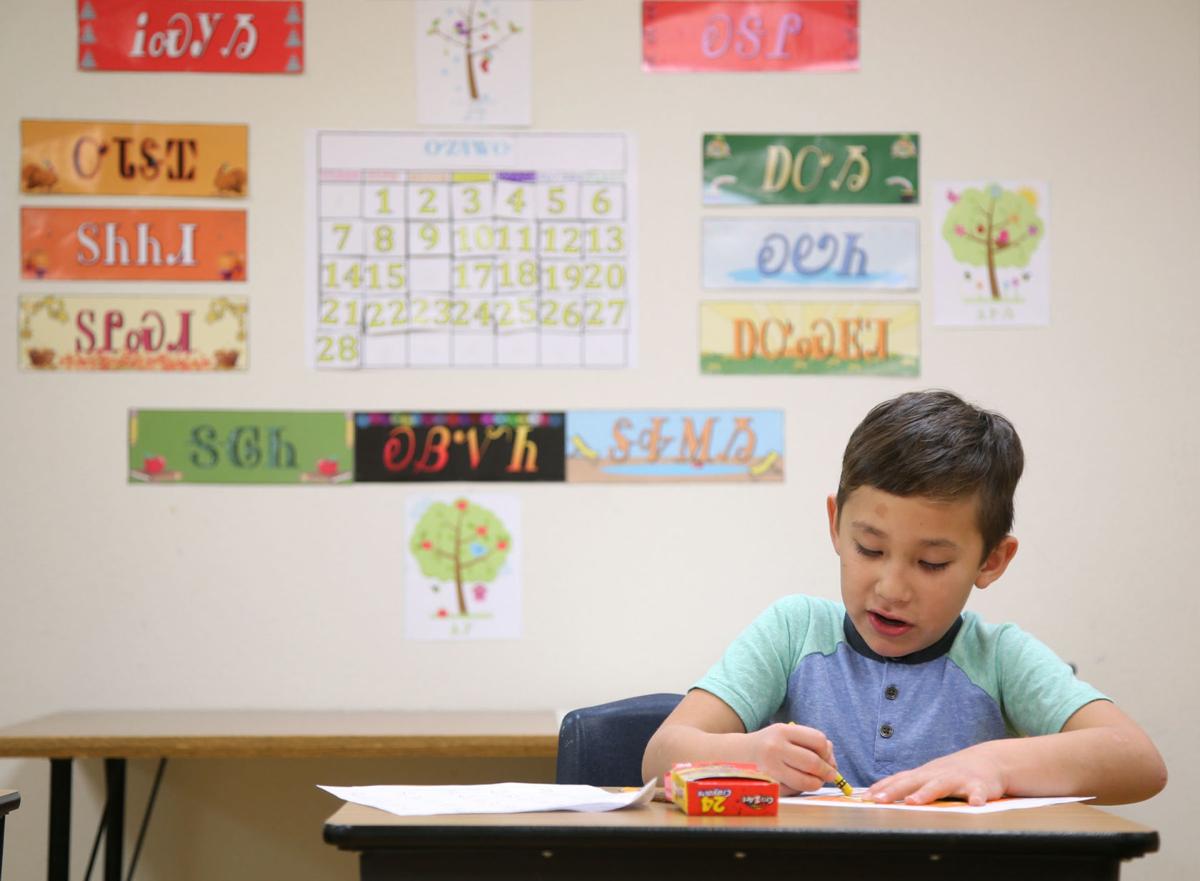 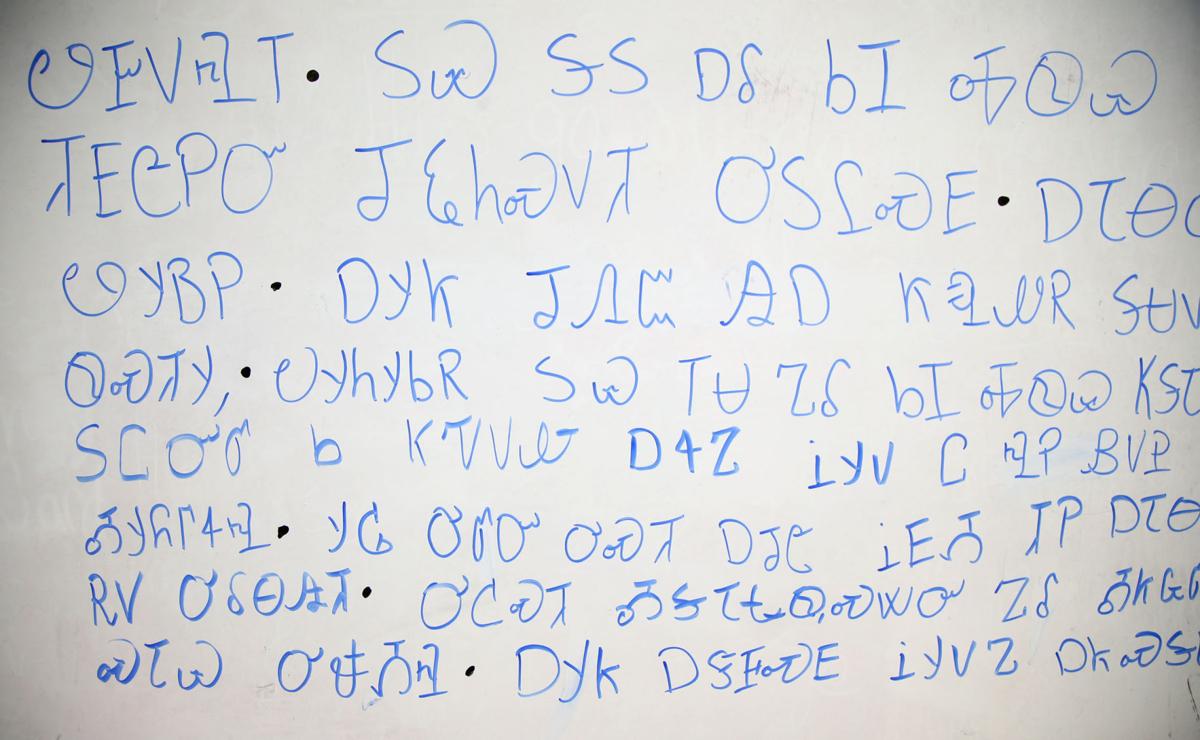 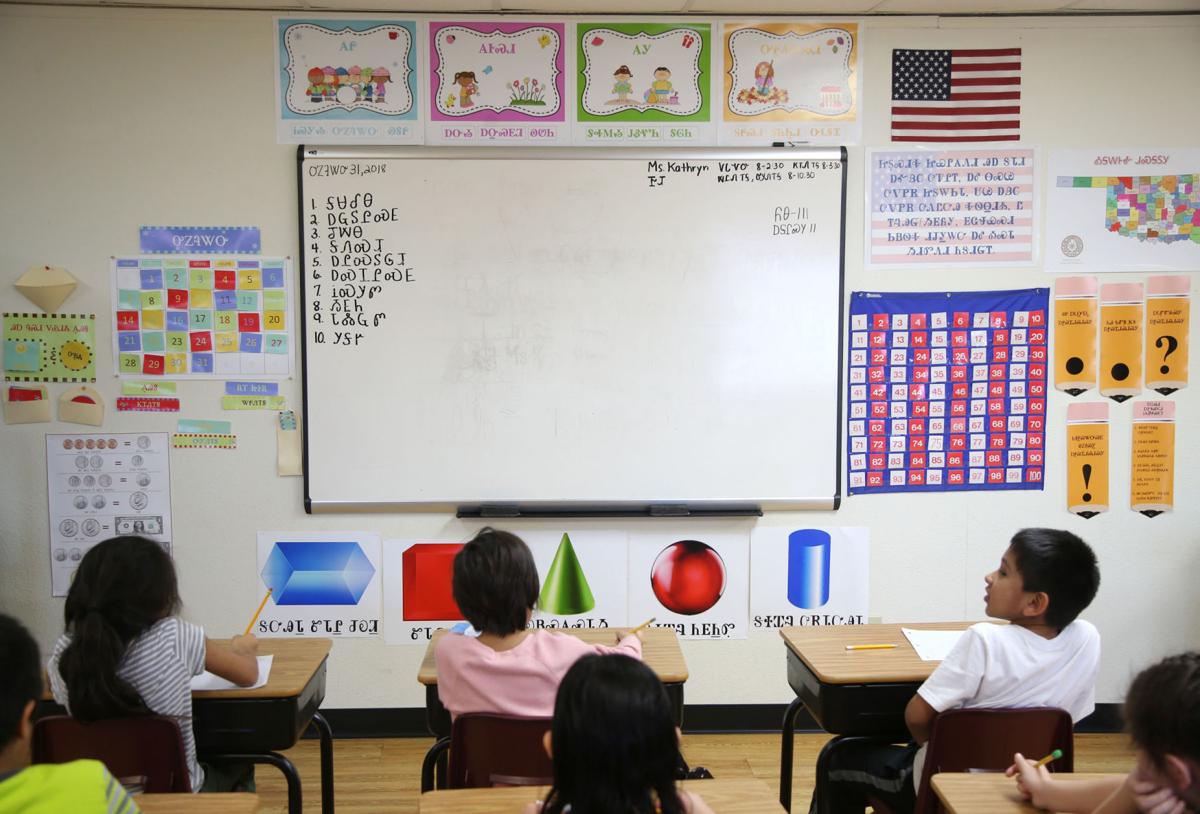 Students prepare for a spelling test at the Cherokee Nation’s language immersion school in Tahlequah. The school currently has 133 students. MATT BARNARD/Tulsa World

In 2010, when they were 9, Cherokee immersion students Lauren Hummingbird (left) and Emilee Chavez used new Cherokee language keypads to work on their laptops. Tulsa World file

Students prepare for a spelling test at the Cherokee Nation’s language immersion school in Tahlequah. The school currently has 133 students. MATT BARNARD/Tulsa World

Thirteen years ago, in an unguarded moment on her first day of kindergarten, Emilee Chavez spoke a single word of English. And a classmate immediately ran to tell the teacher.

“Hey,” the teacher raised her voice harshly, “you can’t use English here. Speak Cherokee, or don’t say anything at all.”

Chavez’s parents would have gotten in trouble if a teacher had caught them speaking a word of Cherokee, which is one reason the language began plummeting toward extinction. Schools banned it, so nearly an entire generation stopped speaking it.

For Chavez and her classmates, however, the Cherokee Immersion School turned the tables. They were punished for speaking English.

Launched in 2001 on the grounds of the tribal headquarters in Tahlequah, the school started with 23 students. But Cherokee is a hard language. Only nine made it all the way through the program.

“I didn’t say much for the first few weeks,” remembers Chavez, now a high school senior. “But when you’re around the language eight hours a day, every day, you can’t help picking it up. After a while, it’s just natural.”

Now the first batch of Cherokee immersion students is about to graduate from high school, a milestone in a grand experiment that is trying to revive the Cherokee language before it is too late.

They haven’t actually been immersed in the language since the seventh grade, when Chavez and her classmates began studying at the Cherokee Nation’s Sequoyah Schools, where all classes are taught in English. The question then was how far behind would they be compared to their non-immersion classmates, who had gone to English-speaking grade schools.

“We were behind,” Chavez admits, especially in reading and writing. “But not for long.”

Now the former Immersion School students are all near the top of their graduating class at Sequoyah, officials say. With their graduation upcoming, however, the program will face an even more critical test. Will they retain the language into adulthood? And will they pass it on to the next generation? Or will the tribe’s ancient language continue to fade?

“We’re not just going to walk away from it and forget it,” says Lauren Hummingbird, one of six immersion-school students who will earn their diplomas from Sequoyah this semester. “We’ve worked too hard and we care too much to let that happen.”

Growing up around her grandparents, who are fluent speakers, Hummingbird’s first words were in Cherokee, not English, making her the closest thing her generation has to a “native speaker.” Close listeners can even detect a mild Cherokee accent when she speaks English. But with most other speakers being her grandparents’ age, 17-year-old Hummingbird has to go looking for opportunities to practice her language skills.

Even her old immersion-school classmates tend to speak English to each other when they cross paths in the Sequoyah hallways, although Cherokee can serve as a useful code language when they don’t want other teens to know what they are saying.

“Even then,” Hummingbird says, “it’s usually a mix of Cherokee and English. When I really want to speak Cherokee, I go see my grandparents.”

After graduation this spring, she will spend a year working with the tribe’s Cherokee Language Master Apprentice Program, a sort of immersion class for adults, where Hummingbird will be both a student and a facilitator. Then she plans to study linguistics in college before returning to Tahlequah to do exactly what tribal officials always hoped some of the immersion students would do when they grew up.

“I see myself coming back here and working with immersion to teach the language,” she says. “I honestly can’t see my future going any other way.”

Native speakers, however, continue to die off faster than immersion programs can replace them, with only 133 students enrolled in the entire grade school this semester, tribal officials say. For the foreseeable future, the Cherokee language will continue to decline.

When the tribe started the immersion school in the early 2000s, it also conducted an extensive survey to gauge how endangered the language really was. And the results were shocking: Only 10,000 fluent speakers remained alive, almost all of them past middle age.

Officials at the time estimated that without drastic efforts to reverse the language’s decline, Cherokee would be dead “within 30 or 40 years.”

Roughly half that time has now gone by, but not without the tribe’s making progress, Hoskin says.

Before the immersion school and the more recent adult apprentice program, native speakers weren’t being replaced at all as they died off. At least now, a new generation is learning to speak Cherokee.

“They amount to only a handful. We know that,” Hoskin says. “But you can see the dedication, the commitment. And that’s why I’m optimistic about the future of the language, because I can see how important it is to these young people.”