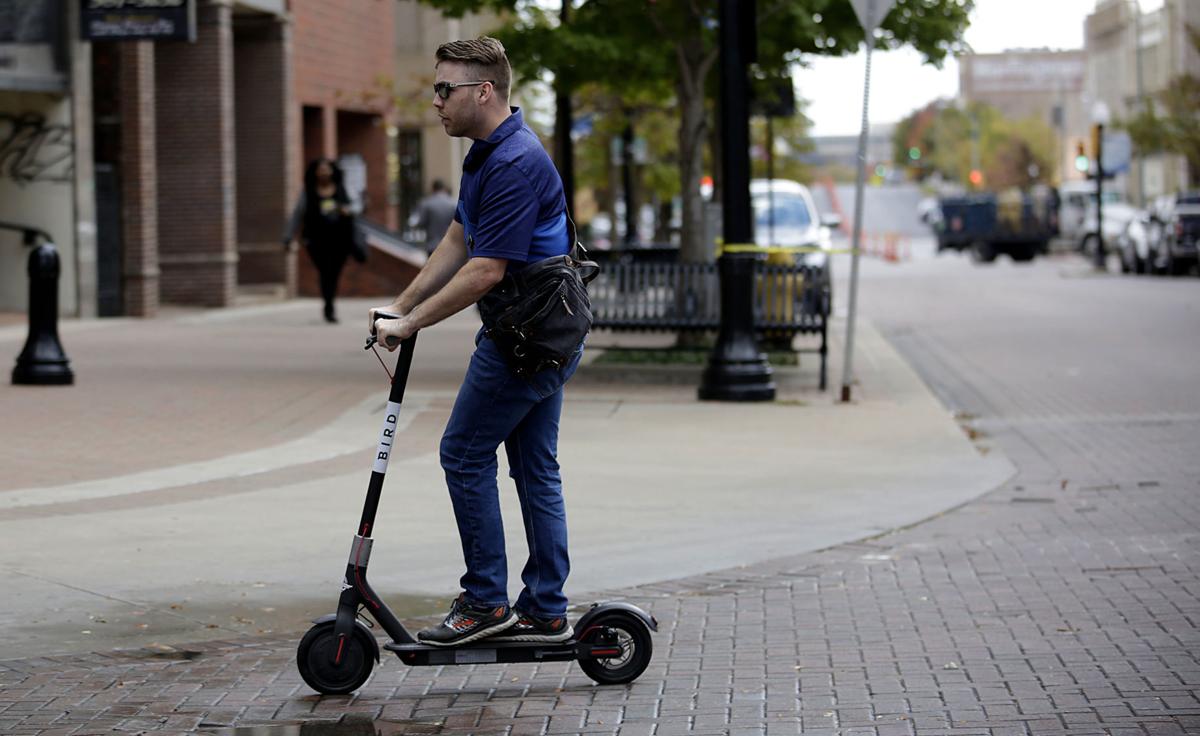 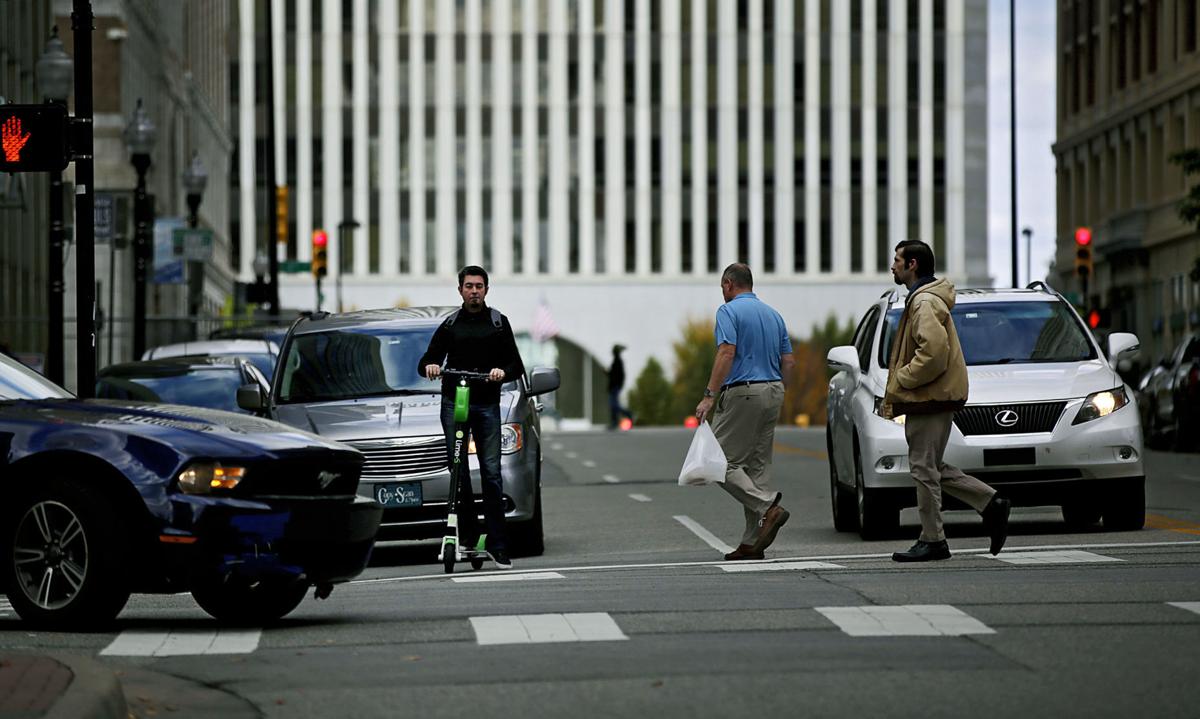 A man waits to cross an intersection at Fifth Street and Boston Avenue on a Lime electric scooter downtown on Monday, Nov. 5, 2018. MIKE SIMONS/Tulsa World 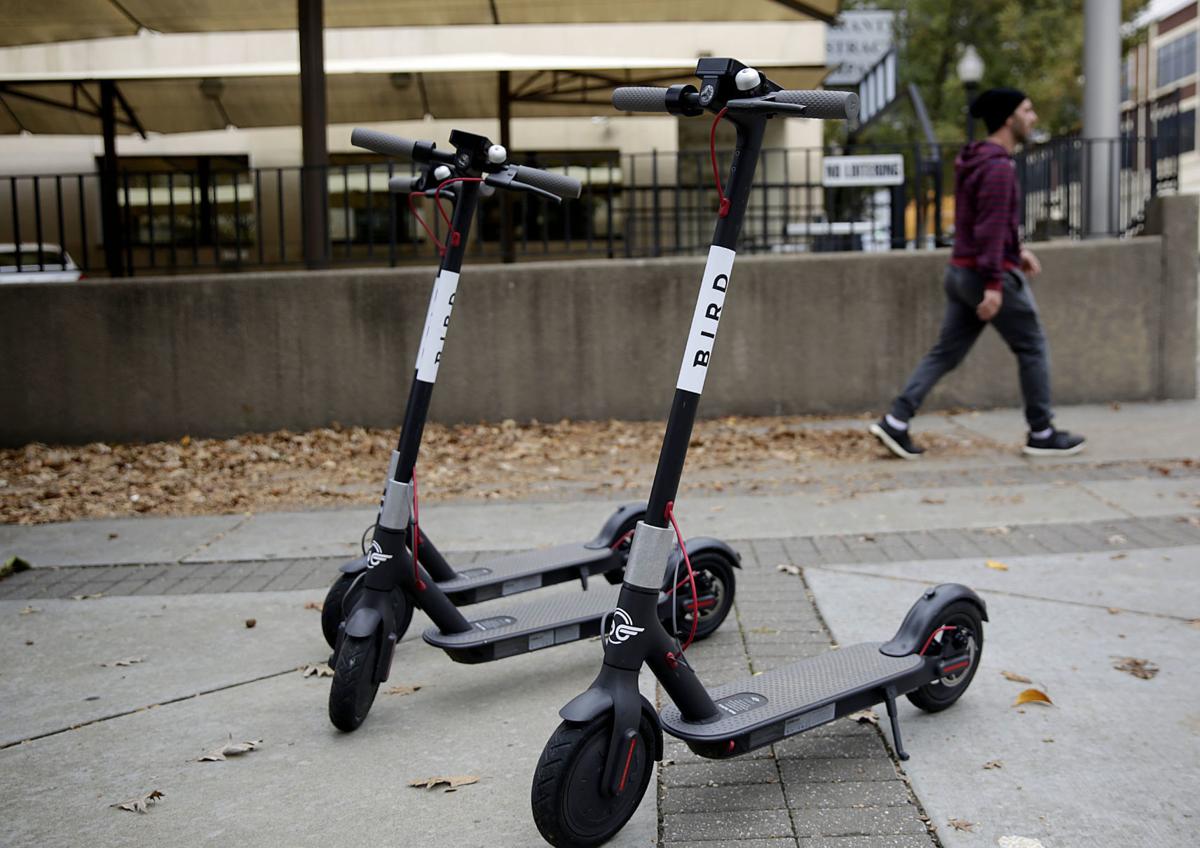 A man waits to cross an intersection at Fifth Street and Boston Avenue on a Lime electric scooter downtown on Monday, Nov. 5, 2018. MIKE SIMONS/Tulsa World

Tulsa is no longer a one-scooter town.

Not long after start-up Lime spread its green-accented scooters across the city last month, Bird Rides Inc. brought its own black, white and red electric vehicles to the city. And Tulsans seem to be embracing the new way to zip from points A to B.

During the first three days Lime scooters were in Tulsa — Oct. 26, 27 and 28 — more than 1,700 people took more than 4,400 rides totaling more than 5,400 miles traveled, according to Nick Doctor, chief of community development and policy for the city. The data were provided to the city by Lime.

“It’s clear that (the scooters) are meeting real needs that Tulsans had,” Doctor said.

Before hopping on one of the two-wheeled mobiles, he said, users should familiarize themselves with the rules of the road. The city ordinance that addresses electric scooters essentially treats them like bicycles, with one notable exception.

In most of the city, the scooters can be used on the street, on the sidewalk or in bike lanes. However, in areas with high pedestrian traffic and slow speed limits — in the confines of the Inner Dispersal Loop and in business districts like Brookside and Cherry Street — the scooters are not allowed on sidewalks.

“We really want to keep people on the streets,” Doctor said of those specific areas. The ordinance does not list specific geographic boundaries of where riding on the sidewalk is or is not allowed.

Sgt. Stephen Florea of the Tulsa Police Department’s Traffic Unit said he hasn’t heard of any arrests or citations given to scooter riders, but he cautioned that users must follow the same rules as bicyclists, such as stopping for stop signs, yielding to traffic signals and signaling turns.

“The rules of the road say that you’ve got to operate the same as any vehicle,” Florea said.

The city doesn’t legally require scooter riders or bicyclists to wear helmets, though officials and the companies advise their use. Doctor noted riders can obtain a helmet from the companies. Bird offers free helmets to those who pay shipping costs. Lime provides them to riders with more than $10 in their account.

When a user ends a ride, the scooter must be parked on a sidewalk and cannot impede pedestrian traffic, Doctor said.

There are four elements of DUI law to consider in relation to electric scooters, Edge said. A person must be driving, on a public road or public space, in a motorized vehicle and have the requisite blood alcohol content.

“Under the law, (operating a scooter drunk) would be covered under the DUI statutes,” he said.

Edge said he has not worked any cases involving a DUI on an electric scooter and has not heard of such a case in the state.

His advice to those contemplating a tipsy scooter ride?

Ask the Doctors: Injuries on the rise as electric scooters become popular

Dear Doctor: Those electric scooters that you can rent by the hour have come to our city, and our son, who is almost 18, wants to start riding…