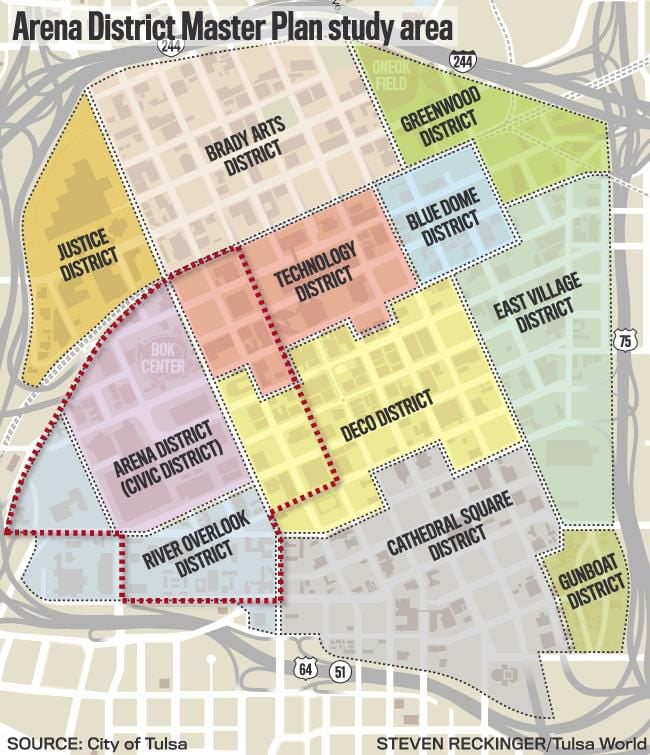 One tiny number jumps out of the massive Arena District Master Plan: 6.

That is the number of acres dedicated to green space, in the form of either a park or a plaza, in the 165-acre district.

Meanwhile, 27 percent of the land is used for parking.

No wonder no one wants to hang out there.

Beginning this week, city officials hope to change that. The Mayor’s Office will unveil the final version of the plan at a press conference early in the week, and the City Council on Wednesday will begin discussing whether to adopt it.

The Arena District is bounded by the Burlington Northern Santa Fe railroad to the north and west, Boulder Avenue to the east, and 11th Street to the south.

The proposed master plan provides a 20-year guide for how the city can turn an area still best known as a 9-to-5 destination saturated with government office buildings into a thriving, eclectic mix of retail, residential and green space that would serve as a front door to downtown.

“It will create a world-class neighborhood, usher in a new era of downtown investment and growth, and represent the unique character of Tulsa with authentic destinations and experiences for both residents and visitors,” the plan states.

To get there, the master plan calls for short-, medium- and long-term investments that would be funded with private, public and philanthropic dollars.

Three signature projects comprise the foundation of the plan:

• Expansion of the Cox Business Center and construction of a new 400-600 room, full-service hotel on the land currently occupied by the Police Courts Building on the corner of Civic Center Drive and Sixth Street.

• Redevelopment of the Page Belcher Federal Building property into an open, walkable block with green space and other amenities.

• Construction of a Transit Block at the site of the downtown Tulsa Transit bus station that would be home to a multi-story, mixed-use development with a multi-modal transit center and parking garage.

The city in 2017 hired MKSK, a Columbus, Ohio-based landscape architecture, planning and urban design company, to create the master plan. Public engagement began in early 2018, with more than 200 people attending workshops on the project. The city also convened a steering committee, interviewed dozens of stakeholders and conducted surveys.

The 30-block Arena District has three jewels — the Tulsa Central Library, the BOK Center, and the Cox Business Center — that draw a total of 1.8 million visitors a year. The master plan would build on those strong fundamentals to create a destination that is attractive to visitors at all hours of the day, regardless of what is happening at the library or event centers.

Accomplishing that will require public and private investment to activate the district with commercial development, housing, and green space and to connect it to other downtown districts by improving pedestrian corridors, according to the master plan.

“While successful in attracting visitors, the Arena District can do a much better job of being welcoming, inviting and engaging,” the report states. “The master plan seeks to provide that welcome, as well as make public spaces and enable development that encourages people to visit, stay and relax.”

To address the dearth of green space in the district, the master plan proposes creating or enhancing green spaces at the BOK Center and COX Business Center grounds, Civic Center Plaza, and the Plaza of Americas.

“In addition, private owners of surface parking lots are encouraged to redevelop them into contributing mixed-use developments that are aligned with the vision of this plan,” the plan states.

The proposed Arena District Master Plan to be unveiled this week includes short-, mid- and long-term recommendations for how to revitalize the 30 block area. Here they are.

- Improving the public realm through streetscaping and wayfinding