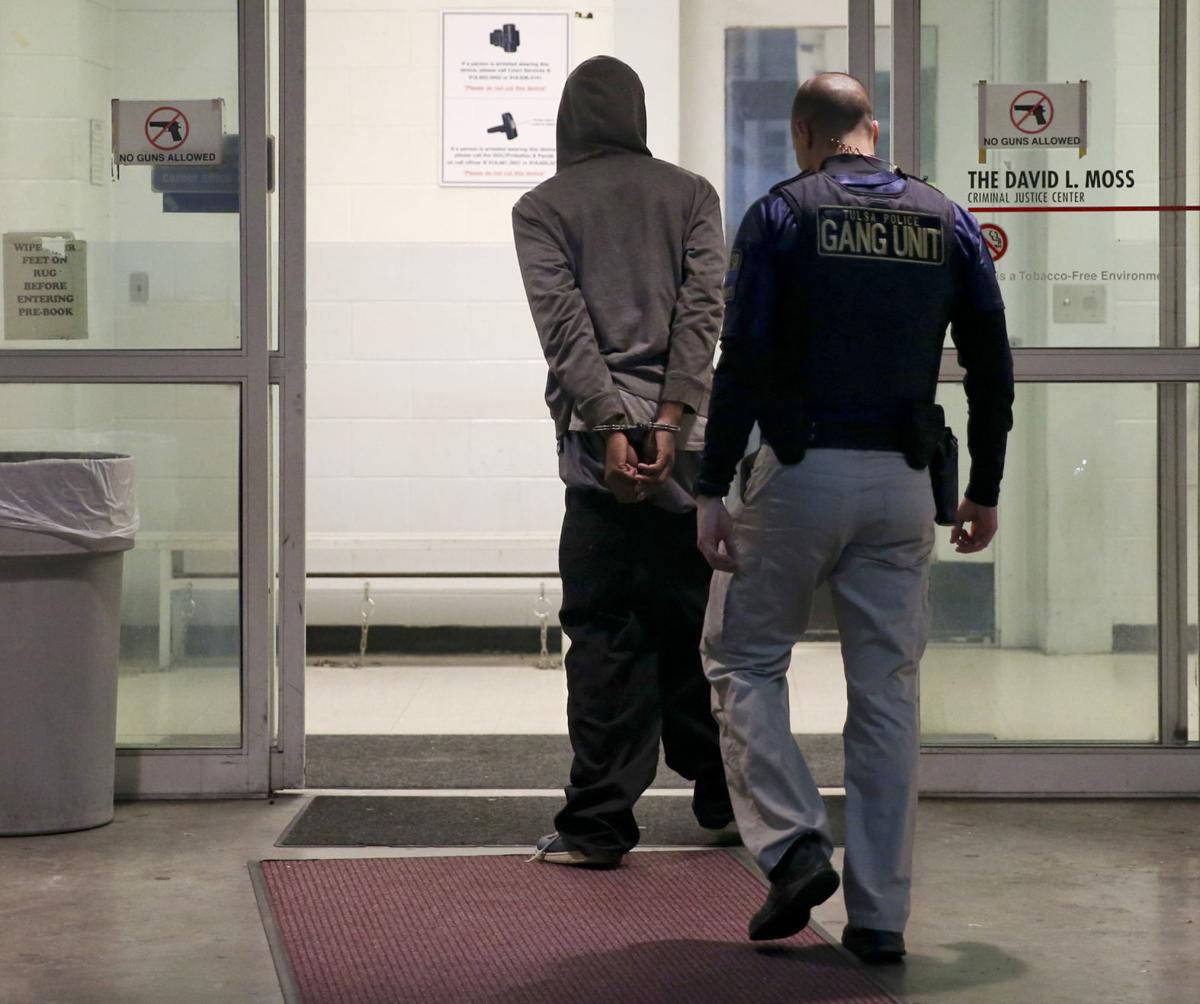 A Tulsa police officer walks a suspect in handcuffs into the Tulsa County jail in 2017. 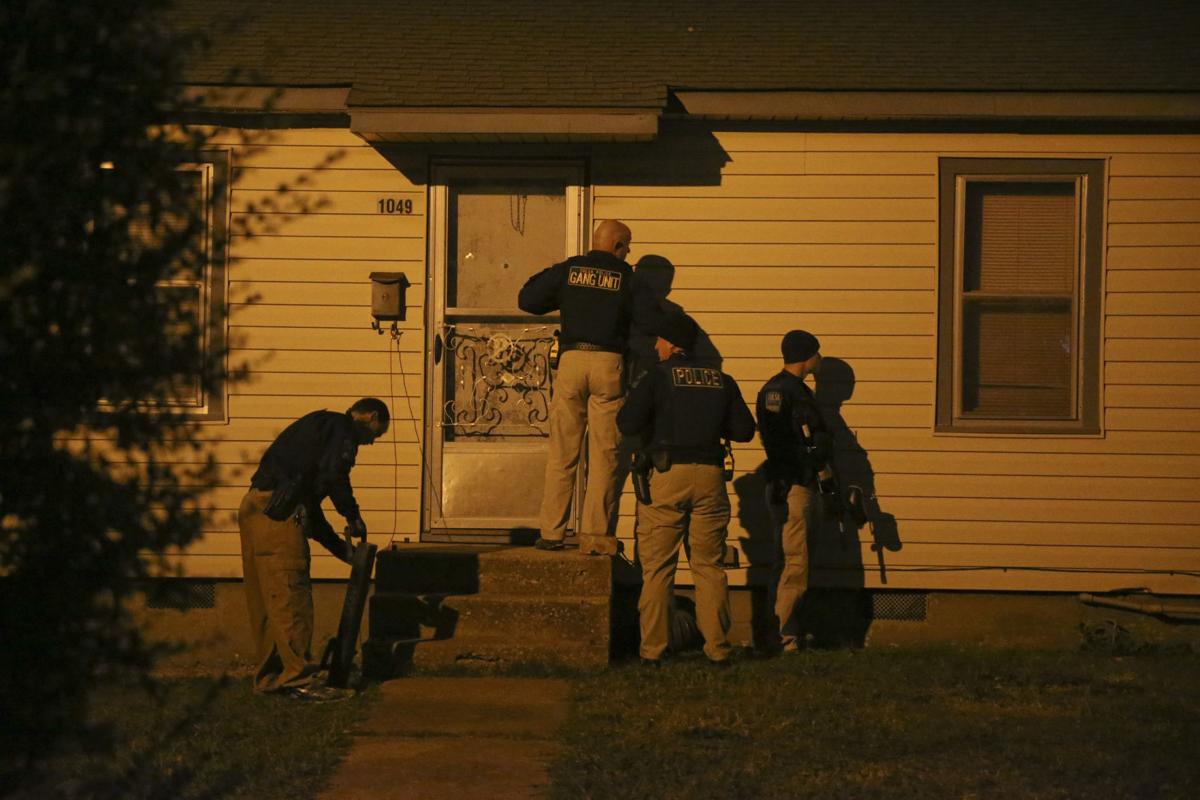 In this image pulled from police video, Tulsa Police handcuff a suspect who was shot and killed in east Tulsa on Saturday, June 24, 2017. Courtesy

A Tulsa police officer walks a suspect in handcuffs into the Tulsa County jail in 2017.

In this image pulled from police video, Tulsa Police handcuff a suspect who was shot and killed in east Tulsa on Saturday, June 24, 2017. Courtesy

A nearly three-year investigation by Human Rights Watch into the Tulsa Police Department found evidence of racial bias in policing outcomes but no proof of “pervasive racism.”

A 222-page document released Thursday cites evidence of racial bias in descriptions of how some officers treat black people, differences in how north Tulsa is policed and disparities of policing effects. The report says the disparities are partly explained by “concentrated policing” in poverty-stricken areas, which often are communities of color and more frequently have calls for service.

Racial disparities were identified in uses of force, arrests, citations and traffic stops, which researchers note is common across the country. Human Rights Watch — a nonprofit that probes abuses worldwide — documented many instances in which it says people were subject to apparent “arbitrary, abusive or disproportionate” force by Tulsa officers.

The organization faults the Police Department for finding only two forceful acts in six years that weren’t within policy out of 3,364 distinct “non-deadly” force actions reported by officers. No discipline was handed out in either case, Human Rights Watch reported.

Internal Affairs reports from 2012-17 indicate that all but five forceful acts were within policy, with one case drawing discipline.

“Human Rights Watch’s analysis is that Tulsa authorities have failed to take effective steps to prevent officers from using force in an abusive manner, while also failing to adequately investigate and hold officers accountable for abuses,” the report states.

Deputy Chief Jonathan Brooks said it’s “misguided” to take racial disparities as evidence of bias or profiling without knowing the entire story. He said police must acknowledge and address community concerns, which means “drilling down” deeper into disparity data to find the root causes.

Brooks said the bulk of police activity is response-based, meaning officers go where the reported crime is.

“To inherently say that is deliberate racial bias, I would have to disagree with because taking actions based on someone’s race, sex, religion, etc., is forbidden,” Brooks said. “It’s against the law; it’s against our policy. It’s all of those things, and we won’t tolerate that.

“What we do have to recognize, though, is as a result of our actions, on the back end, if those disparities exist.”

Regarding excessive or unnecessary force accusations, Brooks said officers react to a person’s behavior — not race, sex, religion or other nonbehavioral factors — when trying to make an arrest.

Brooks said there may be a variety of reasons why more discipline hasn’t resulted from uses of force. He cited complaints not being filed by alleged victims or officers resigning prior to completion of internal investigations.

“It’s not an easy task ahead of us, because if there was a simple answer to this, all the other cities in the U.S. would have this solved,” Brooks said. “But I believe we’ll be at the forefront in Tulsa.”

Human Rights Watch cited an unnamed former Tulsa police officer who said policing culture is more aggressive in north Tulsa, where the population is predominantly black, than in other areas of the city.

The former officer described a prevailing sentiment that it’s tough to work in north Tulsa, with only the “hardest” or “meanest” officers able to do it, according to the group’s report.

Researchers found no disparities in force against people arrested for violent crimes. But black arrestees were subject to force at nearly twice the rate of white arrestees when the violation was a less serious “public order” crime or drug sale. That disparity rate grew to three times for warrant arrests, some of which were for missing court dates or payments on low-level violations.

“That (the data) show substantially larger differences in force rates may indicate that officers are handling more routine encounters with black people more aggressively,” according to the report. “The disparity reflects the descriptions of overly aggressive policing towards black people given to Human Rights Watch in the course of this investigation.”

Brooks said it’s “entirely inaccurate” that only the toughest or meanest officers work in north Tulsa. Some of the most caring and giving officers work there, he said.

“To say the Police Department intentionally uses force in what he or she (the unnamed former officer) described as north Tulsa is, I think, inaccurate,” Brooks said.

One of the best tools now to evaluate a situation beyond written reports or data is body-worn camera footage, Brooks said. Body cams weren’t fully implemented in the department until February 2018. Field testing began with 40 officers in November 2016.

Brooks said officers react to behavior, not the alleged crime, when applying force during an arrest attempt.

“It’s entirely possible to have a more violent crime such as robbery and the person willfully surrender and have a lesser crime and the behavior is the complete opposite end of the spectrum,” Brooks said. “They’re not willing to go to jail at any cost to themselves.

“Is the crime type important? Yes, it is important, but what I’m saying is just as equally important is the behavior.”

Brooks said he feels the agency has been proactive and progressive in implementing changes across the policing spectrum and specifically use of force. To illustrate the point, he said TPD applied for and was chosen by the International Association of Chiefs of Police to be a city whose uses of force are studied by two universities.

The application was filed in spring 2018 before the first Tulsa Equality Indicators report was released, he said. The first preliminary report is expected to be released later this month.

”I’m more inclined to wait for the academic analysis and see what their analysis says when it talks about the disparity in applications of force in lesser crimes,” Brooks said.

The report notes that Tulsa police data didn’t include the race of the person stopped — a problem, it says — but did show more frequent and prolonged vehicle and pedestrian stops in north Tulsa and other areas with higher nonwhite populations. Researchers approximated their intensity based on length of time.

“A stop that results in removing a person from the car, handcuffing, and searching them or their property, is likely to take much longer than writing a ticket or giving a warning,” the report states. “The longest average stops were concentrated in North Tulsa census tracts; stops in some tracts there were twice the length of average stops in South Tulsa census tracts.”

Brooks said it’s never a pleasant sight when an officer uses force. A bystander can make assumptions through his or her own perceptions and without knowing the totality of what transpired, he said.

If these sorts of encounters are happening, Brooks said he wants witnesses to report them to police so they can be reviewed.

“But what I don’t want to do is dismiss their accounts,” Brooks said. “For progress to happen, we have to have a very complex and open conversation and dialogue about the issues going on and work together on methods to resolve them.”

The rates of observable driving violations, such as speeding, were about equivalent between black and white Tulsans. But Human Rights Watch found that black people received tickets for driving without a license or without insurance at twice the rate of white people.

“This disparity indicates a disparate racial impact of poverty,” the report states. “It may also suggest that officers are stopping black drivers to investigate more frequently than white drivers and finding these violations only after the stop.

“In one quarter of the driver’s license/insurance related tickets, there was no accompanying moving violation, raising questions as to the reason for the initial stops.”

Brooks said the disparity in moving violations vs. license or insurance citations may be a misinterpretation of police good faith.

He said he’s watched officers on video use discretion to cut a person a break on a more expensive moving violation but still ticket them for a lesser nonmoving violation. An insurance citation can be waived in court upon presentation of proof of insurance, he noted.

“I can’t let you completely walk away from this, so you’re going to have to answer for something,” Brooks said of an officer’s mindset. “So maybe this is just misunderstood as a humanitarian part on behalf of the officer.

“Now I’m not saying that’s case in point on every single one, because there could be different reasons for every one of these.”

However, public safety becomes more difficult because police tactics have “bred distrust and driven a wedge between law enforcement and affected communities,” according to the report. That raises questions about how effective policing strategies have been in reducing crime.

”Continuing to treat community problems related to poverty and deprivation as primarily law enforcement problems will simply continue that cycle of desperation, crime, punishment and deeper despair, and people of color and poor people in Tulsa will continue to feel its traumatic effects,” the report states.

Brooks said a balanced and nuanced conversation is necessary to open minds and achieve positive progress. Call out what needs to be improved but also credit the good. The police aren’t here to tell people what to think but to explain how to reason through the complexities of policing, he said.

He added that there is no controversy with Human Rights Watch. Brooks pointed to the report, which acknowledges that he participated in several interviews with researchers and responded to follow-up questions by email and text.

”But even though if we were better, we still recognize with the professionalism of the Tulsa Police Department that we can always work harder and do better for the community.”

Why pick Tulsa to study?

The Human Rights Watch report states that Tulsa has a unique history of racial oppression, specifically highlighting the race massacre in 1921.

Common in the U.S., contemporary policing takes place in de facto segregation leftover from an era of legalized segregation. In Tulsa, there have been recent racially charged events, and the city government recognizes many of the issues.

Human Rights Watch believes that confluence of factors offers Tulsa the opportunity to lead policing change in the U.S.

"While Tulsa's unique history, current social conditions and political dynamics set it apart from any other city, its policing problems are not uncommon," according to the report. "Tulsa has the opportunity, then, to embark on effective, and not superficial, reform to change its policing culture to one of accountability, and, more importantly, to solve societal problems through services and support rather than often abusive police enforcement action."