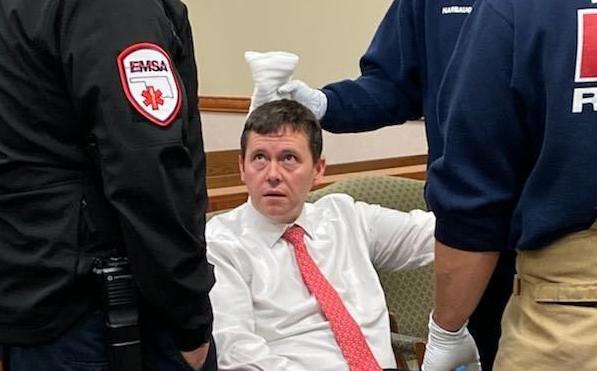 Kevin Gray received treatment from first responders in the courtroom Friday after a defendant, Dameon Leathers, reportedly struck him in the head with a water pitcher. Courtesy

A top Tulsa County prosecutor is recovering after being attacked Friday moments after jurors found a defendant guilty of first-degree murder.

Dameon Leathers, 37, is accused of hitting Tulsa County Assistant District Attorney Kevin Gray in the back of the head with a water pitcher before deputies could intervene.

Leathers has a lengthy criminal history in Tulsa County, having served multiple sentences for second-degree burglary, and was on trial for the 2018 robbery and murder of Howard Thompson.

About 7:40 p.m., the judge had read the guilty verdict and was instructing jurors in the next steps for sentencing when Leathers reportedly looked at his family in the back of the courtroom and grabbed the water pitcher, according to an arrest report. Without warning, he raised it above his head and struck Tulsa County Assistant District Attorney Kevin Gray on the back of the head, knocking him out of his chair and onto the ground, the report says.

Gray was taken to a hospital via ambulance after he completed the sentencing portion of the trial, and Leathers was treated at a hospital before being booked back into the Tulsa County jail on a new complaint of assault and battery after former conviction of a felony.

“This is the second time in four years I’ve had a prosecutor attacked in the courtroom,” Tulsa County District Attorney Steve Kunzweiler said, referencing a 2015 case in which a defendant hurled a water pitcher across a room, striking a prosecutor in the face.

Kunzweiler said he had “very pointed” conversations with Sheriff Vic Regalado, who said water pitchers would no longer be permitted in courtrooms, and District Judge Dawn Moody, the chief judge of the Criminal Division, about the structure of courtrooms.

Kunzweiler said some smaller courtrooms, including the one in which this assault occurred, have the defendants’ tables directly behind the prosecutors’, leaving prosecutors vulnerable to surprise attacks from behind.

“It’s very frustrating to me that I have people who are public safety servants who are getting paid a disproportionately low wage versus the risks that they face on a daily basis,” Kunzweiler said. “I’m hopeful that our Legislature will start paying prosecutors across the state a salary that is competitive with other jurisdictions around Oklahoma.”

Kunzweiler said he was at dinner with his wife when he was notified of the attack and went to the courtroom to assist Gray in completing the two-stage trial.

Gray said in an interview with the Tulsa World that he was seated and looking down at his phone to let his wife know of the verdict when Leathers struck him. The plastic pitcher broke and left a baseball-size knot on the back right side of his head, Gray said.

“I’m just sitting there; (Leathers) is standing behind me, … and he just blindsides me, then hits me a second time,” Gray said. “On the second time, I’m starting to turn around and figure out what in the world has just happened.

“I see him coming across the table and coming at me. I’m not clear if it was him that knocked me over or a deputy, but I ended up falling over onto my right side.”

When a deputy deployed the taser, Gray said the wires crossed his leg and briefly shocked him. After initial treatment from paramedics, Gray remained in the courtroom until the jury went into deliberation for sentencing before leaving for the hospital.

Jurors recommended Leathers be sentenced to life without parole plus 45 years, but a formal sentencing will determine the time he will serve.

“He’s very fortunate his injuries weren’t more severe,” Kunzweiler said. “Mr. Gray does this job because he enjoys doing it, but he in no way deserves, nor does any prosecutor deserve, to be attacked for protecting the community.”