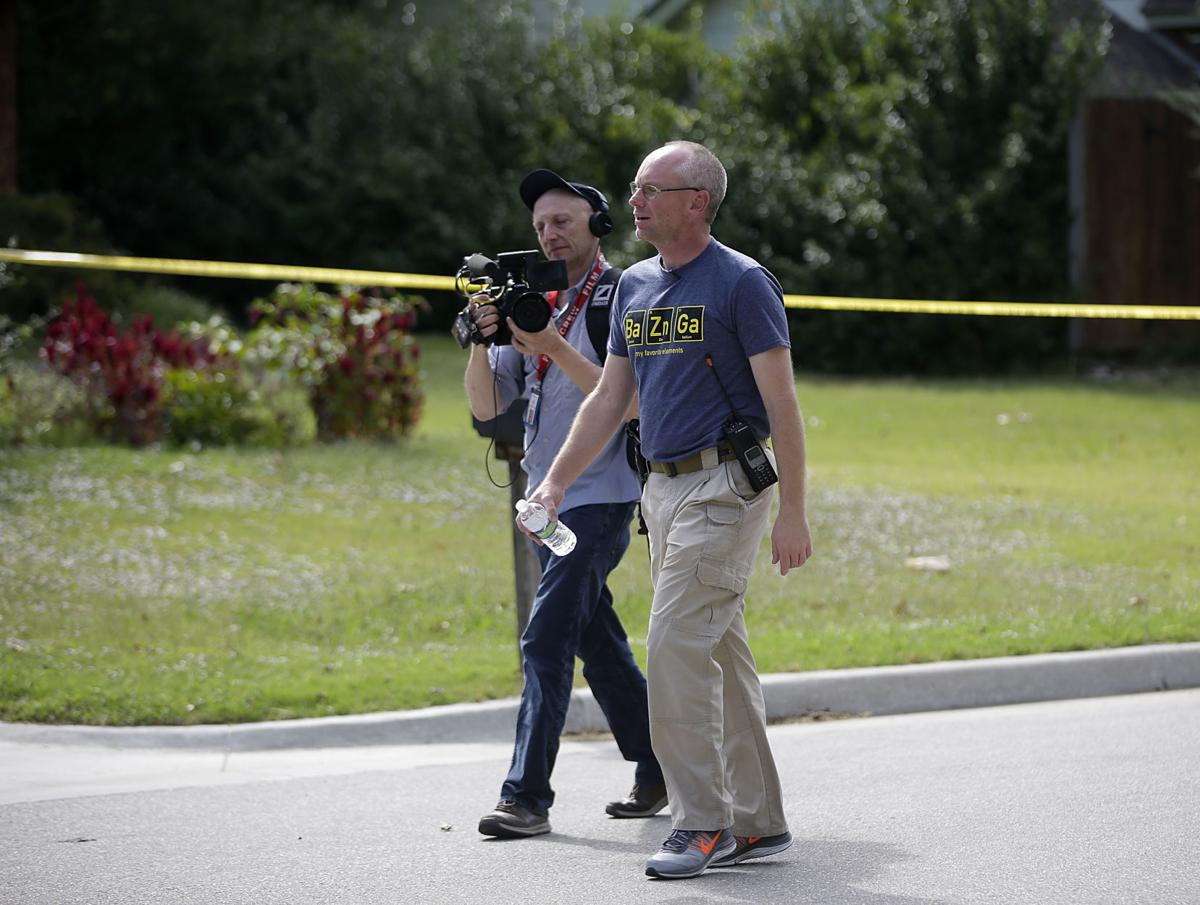 A photographer films Tulsa police for a television show while they investigate a south Tulsa homicide in 2017. MIKE SIMONS/Tulsa World 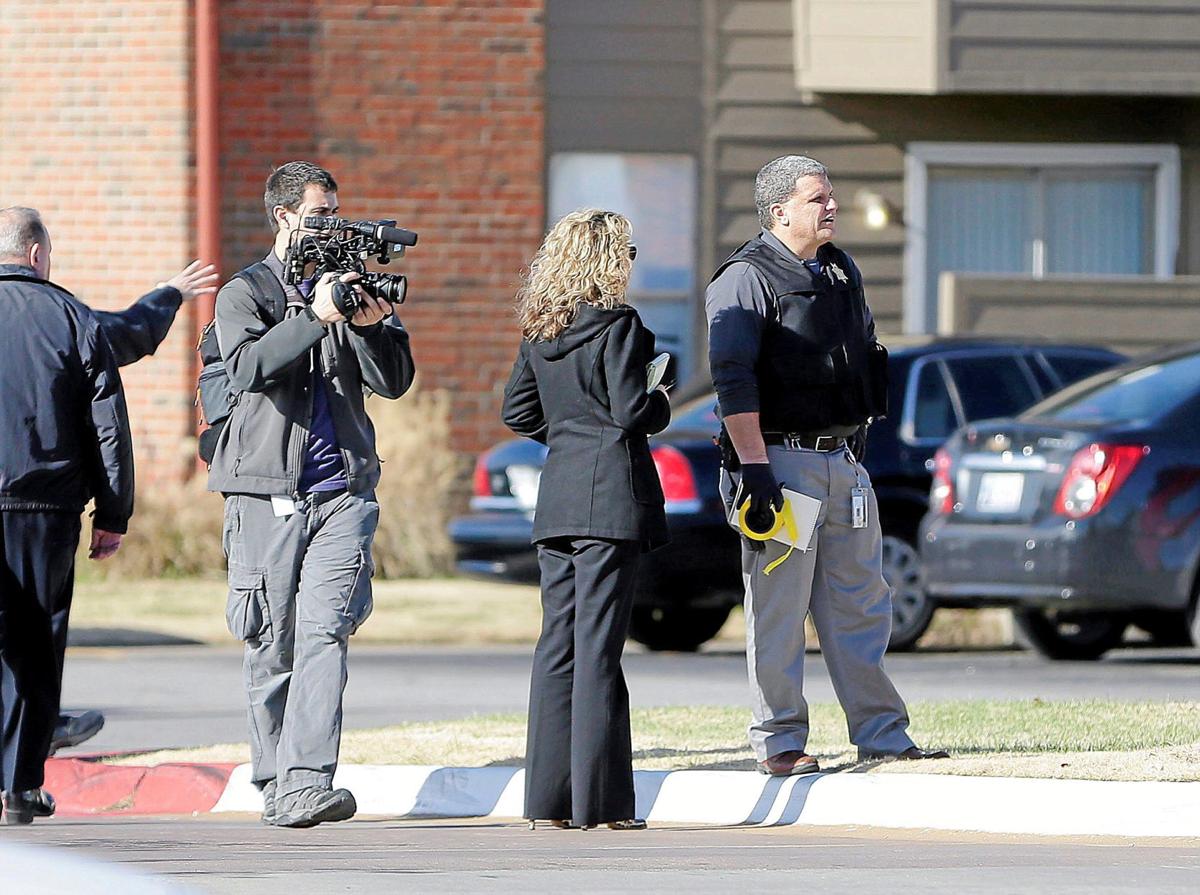 Film crews record as Homicide Sgt. Dave Walker works at the scene of a double homicide in 2014. MIKE SIMONS/Tulsa World

A photographer films Tulsa police for a television show while they investigate a south Tulsa homicide in 2017. MIKE SIMONS/Tulsa World

Film crews record as Homicide Sgt. Dave Walker works at the scene of a double homicide in 2014. MIKE SIMONS/Tulsa World

Unsolved murders are typically at the mercy of resources, commitment and time.

Witnesses move away or grow old, and memories fade as the decades pass. Cardboard boxes of case notes gather dust in the dark. Leads go cold.

But firing up TV cameras and pointing them at a dedicated group of investigators can breathe new life into dormant crimes. Such is the case for “Killer Unknown,” an Investigation Discovery series currently highlighting the work of the Tulsa County Sheriff’s Office’s Cold Case Task Force.

The show is one of several in recent years to feature the work of Tulsa law enforcement agencies. “The First 48” gives viewers up-close access to the Tulsa Police Department’s Homicide Unit. In 2016, the department’s officers were shown in episodes of A&E’s “Live PD”. And TPD’s Sgt. Sean Larkin, known as “Sticks,” is the host of “PD Cam,” which isn’t affiliated with the department.

So, how does Tulsa benefit from putting its most heinous crimes and the people trying to solve them in the limelight?

Local law enforcement top brass say the shows do more than offer viewers gripping prime-time television: They help establish trust in the community, encourage tipsters to pick up the phone and grant the public access to steps of an investigation usually kept private.

“It gives an opportunity for the general public to see behind the scenes — what happens, how we go about developing and working cases and investigating them,” Tulsa County Sheriff Vic Regalado said. “It gives them an insight into what police work’s about. I know that is of interest to the public because if it wasn’t, we wouldn’t have so many crime shows.”

“Killer Unknown” is a six-part series documenting TCSO’s Cold Case Task Force and its efforts to crack two of the county’s 31 unsolved homicides. Since the show kicked off Nov. 24, it has yielded exactly what the unit hoped for: tips.

Retired Tulsa police Sgt. Mike Huff, who leads the task force, said the unit has received close to 20 tips from Oklahoma and beyond about the 1973 homicide of Veda Woodson and the 1998 murder of 16-year-old Dena Ann Dean, the two cases featured in the show.

“When you’re looking at a case that’s 20 years old, you have to see where that tip fits and if it’s a big piece of the puzzle or an inconsequential piece,” Huff said in an interview at the task force’s headquarters at the Tulsa County Sheriff’s Office.

The task force is composed of retired investigators who volunteer to take a fresh look at unsolved murders. They drive across the state, re-examine evidence and field phone calls, all in an attempt to offer a sense of finality to victims’ families.

“We’re not going to bring closure to anybody,” Huff said. “We’re going to bring resolution to the questions that have been tearing them up for years. That’s our mission.”

Neither the task force nor the Sheriff’s Office receives money for participating in “Killer Unknown.” The work by Huff and his crew is funded by private donations, which can be made to the Tulsa County Sheriff’s Foundation and earmarked for the unit.

Police Chief Chuck Jordan said he believes departments should consider how a show will portray police work and crime before agreeing to step into the spotlight. For example, he said he has seen shows play up crime in other cities that he knows are safer than the footage would lead viewers to believe.

That consideration has worked in the department’s favor over the past four years on “The First 48,” which has stationed a producer and photographer in Tulsa to document the department’s Homicide Unit. Jordan said he appreciates that the show approaches homicides with the victims and their families in mind.

Whenever homicide investigators head to a scene, a camera is not far behind.

“It’s a little bit intimidating to have a camera with you all the time,” Jordan said. “These folks just seem to fit in so well, the detectives forget they’re there.”

The Police Department also does not receive money for appearing on the show.

TPD and TCSO officials review all footage before it is aired. Casey Roebuck, a spokeswoman for the Sheriff’s Office, looked at “Killer Unknown” footage with some of the task force members. Jordan reviews material from “The First 48” with Deputy Chief Dennis Larson and Maj. Tracie Lewis.

The next episode of “Killer Unknown” airs at 9 p.m. Saturday on Investigation Discovery, which is channel 138 for Cox customers.

“At the end of the day, if “Killer Unknown” can provide that one piece of information that leads to an arrest or at least a case being solved so that we can provide that closure to a family member, then it’s all worth it,” Regalado said.

"The Innocent Man" is inspired by the John Grisham book of the same name, which chronicles the slaying of Ada waitress Debbie Sue Carter in 1982 and the controversial murder case that followed. The six-part documentary series premieres Dec. 14 on Netflix for streaming video customers.