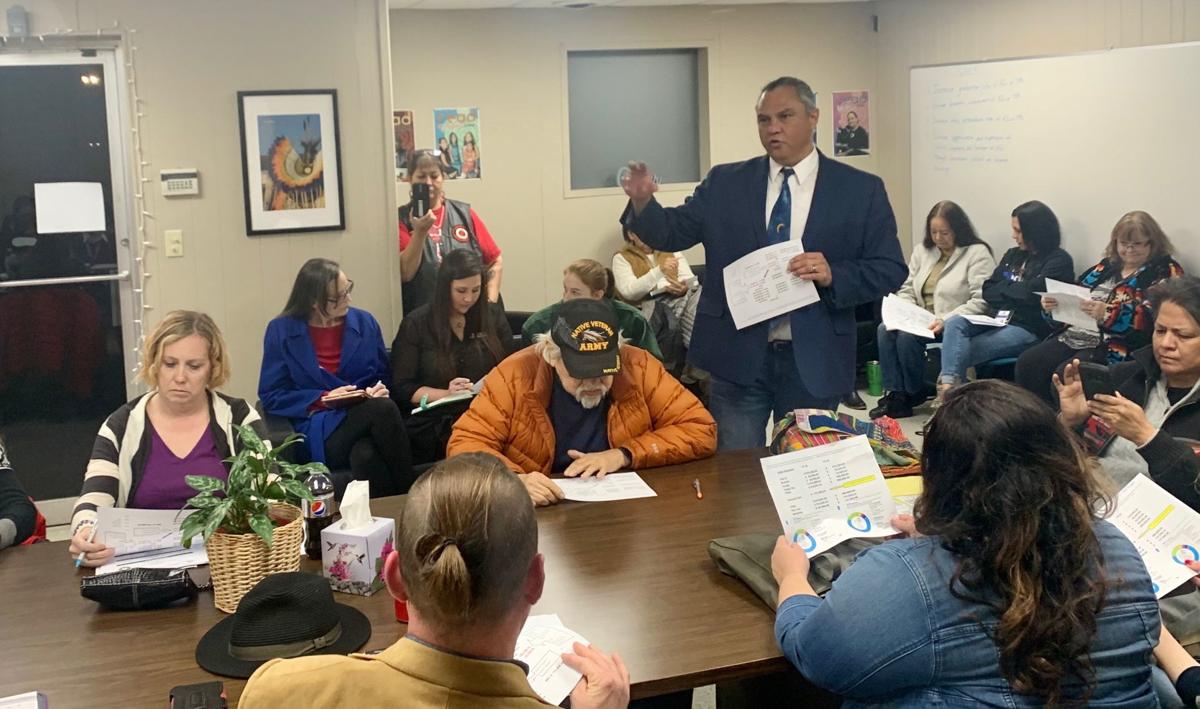 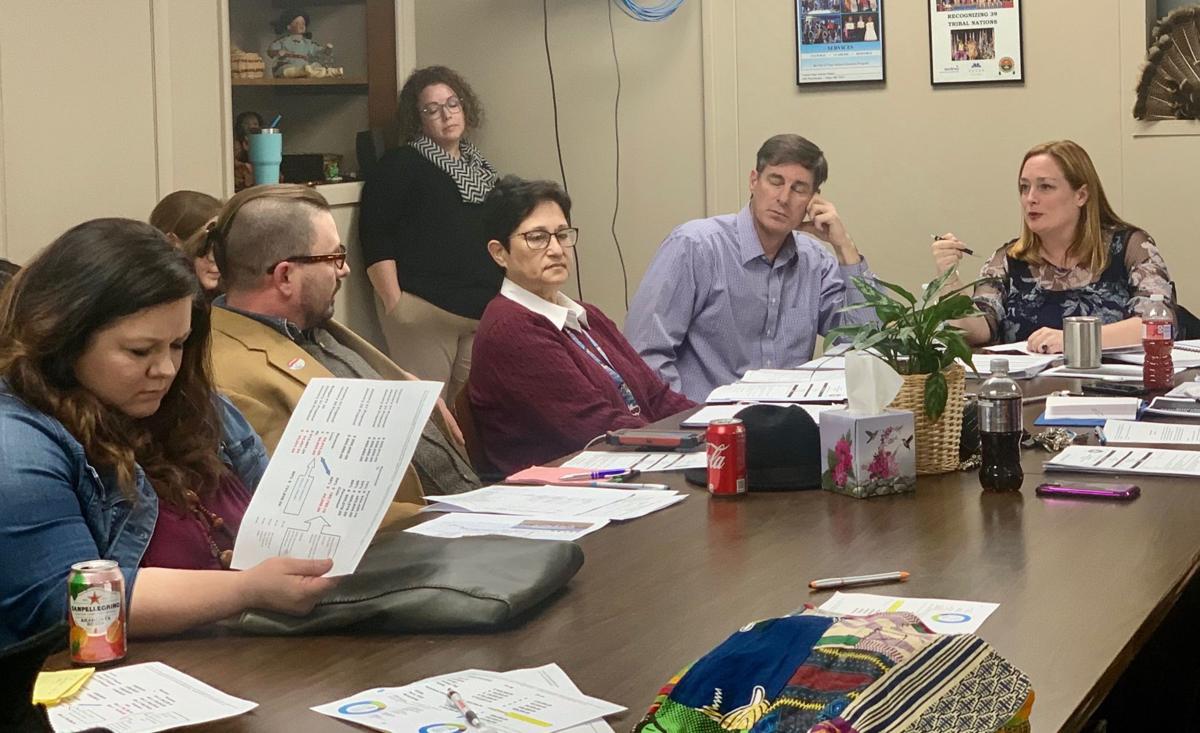 Opponents of the controversial reorganization effort piled into the committee’s small monthly meeting space to share their concerns and fears about the potential changes, which involve eliminating the program’s seven teacher-certified resource advisers.

Lana Harjochee, a Muscogee (Creek) Nation citizen whose children attended TPS, told committee members they have a responsibility to stand up for the approximately 3,000 students in the Indian Education Program.

“If you can’t do it, then you need to step aside and let someone else who cares enough do it,” Harjochee said. “I know, me personally, my kids have been out of school for a long time, but I’d be more than happy to step in your shoes and help these kids because the kids are the future. The kids are the ones who are going to be changing our world.”

The Indian Education Parent Committee, which oversees the implementation of the federal and tribal grants funding the program, has no say in how the TPS Board of Education will vote on the proposed reorganization in mid-March. It does, however, have to sign off on the district’s use of federal dollars in an annual budget application submitted to the U.S. Department of Education in May.

The school board originally was expected to hear and vote on the reorganization during a special meeting Thursday. Last week, Superintendent Deborah Gist announced she would delay bringing the proposal before the board following extensive community backlash. Board members still will vote on the rest of the recommended district office personnel reductions this week, but now they won’t consider the Indian Education changes until mid-March.

Gist said she is extending the timeline to give TPS more time to continue engaging with tribal stakeholders and leaders. She released a joint letter of cooperation outlining several steps to be taken throughout February to improve the reorganization proposal. The letter, which was signed by her and several local tribal leaders, promised to pursue additional collaboration with additional native stakeholder groups, including the Oklahoma Council for Indian Education.

During Tuesday’s parent committee meeting, Lucyann Harjo read a letter sent to board members and district leaders from the Oklahoma Council for Indian Education, of which she previously was the president. The letter states the council’s board of directors was not contacted about any collaboration until a week after Gist named their organization in her joint agreement.

Although the council directors welcome the opportunity for regular collaboration with TPS, they believe this partnership should have taken place well before the proposal was made, according to the letter.

“We appreciate this request for official ongoing collaboration as you consider a reorganization or restructuring, which would be in our opinion a regression in services to the high number of Native children in your district,” the letter states.

The proposal further calls for hiring a 12-month cultural enrichment specialist and a customer care associate in addition to expanding after-school tutoring for eight months to all sites for native students. Tutoring services currently are available at 21 schools for four months of the year.

District officials have said the recommended changes are a response to reduced federal grant funding resulting from a decline in students with 506 forms. Title VI is funded on a per-pupil basis, and the number of eligible students reportedly has declined by more than 600 in at least seven years.

Several of the employees whose jobs are being recommended for deletion, including resource adviser Trygve Jorgensen, have expressed ire over the district’s decision to eliminate federally funded positions and accused administrators of retaliating against them for filing several grievances with the district.

Jorgensen also criticized the potential changes during the parent committee meeting, focusing on an expenditure decrease of Indian Education funding dedicated to employee salaries from 70% to 69% in the latest proposal. He said the personnel cuts would save the district about $44,000. The district states total expenditures for the program would decrease by about $51,000 with the reorganization.

“If it’s a $45,000 deficit in (fiscal year 2020-21), why is there a complete restructuring of the entire program,” Jorgensen asked committee members. “If the reduction of force is aligned with what your change is, then you just simply eliminate one resource adviser. You don’t eliminate all seven. That doesn’t make any sense to me.”

Administrators say the goal of the reorganization is to reshape the program to operate within financial constraints while also creating opportunities to best serve students.

Also during the meeting, the Indian Education Parent Committee voted for the signature of its chairwoman, Hether Cuervo, to be rescinded from Gist’s collaboration letter. Cuervo was among seven people, including the principal chiefs of three local tribes, who signed the bottom of the joint commitment signaling their support.

Committee member Aaron Griffith raised the issue, arguing that the district seems to be trying to pass the collaboration letter off as a substitute for actual tribal consultation. He further took issue with Cuervo's signing the document without the rest of the committee’s approval.

Griffith named a few additions he would like to have seen in the letter, such as more signature lines for the leaders of the TPS-authorized charter schools.

Another complaint centered on the letter’s promise to conduct a public survey to collect feedback and recommendations for the proposal. Griffith said the sentence should be amended to include the participation of the committee in the survey process.

“As far as this collaboration letter is concerned, I do not accept this in its current form. I don’t accept your signature being valid,” Griffith told the chairwoman.

“I would suggest that we put this into a subcommittee for us to look at and rescind your signature until we as a committee have had a chance to look at this letter, make any amendments or changes that we would like to see before we agree to it and send it back to them for them to look at.”

In response, Cuervo said she waited to sign the letter until the leaders of the Cherokee, Muscogee (Creek) and Osage nations did so and that she made a move to give the committee a long-awaited seat at the table with the tribes.

“If the principal chiefs sign this and say they will come to the table and collaborate and that we can collaborate with them, I’m going to take that opportunity for this committee and for the 3,000-plus students to get our collective voices heard,” she said. “So that’s why I signed it — on behalf of the children.”

Three of the four committee members in attendance voted to rescind Cuervo’s signature and form a subcommittee to decide what changes should be made before returning her name to the letter.