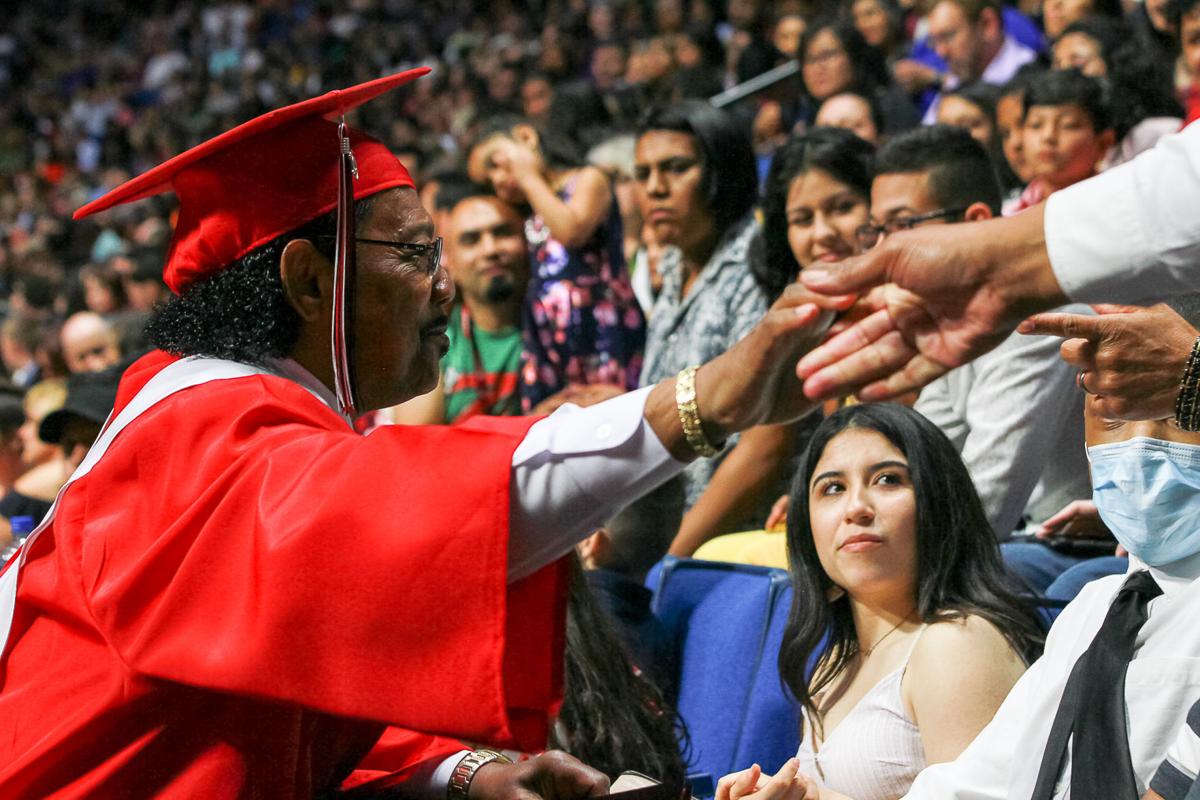 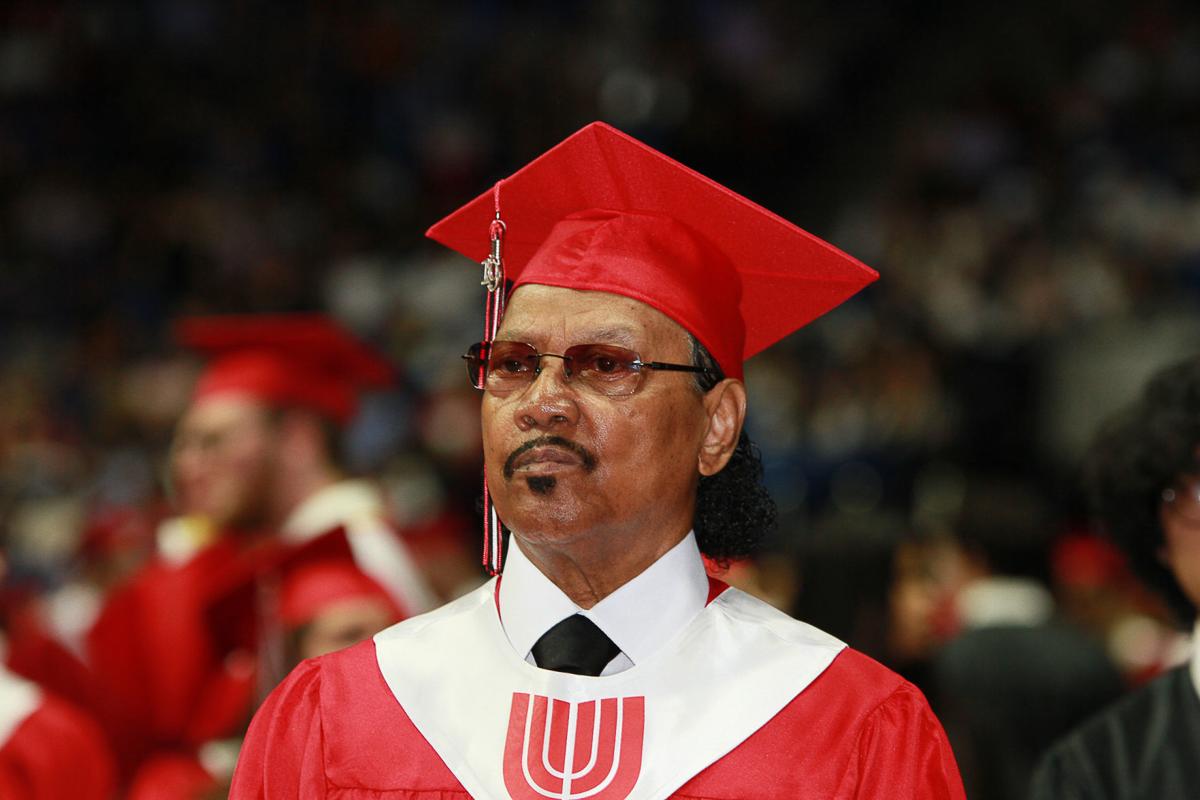 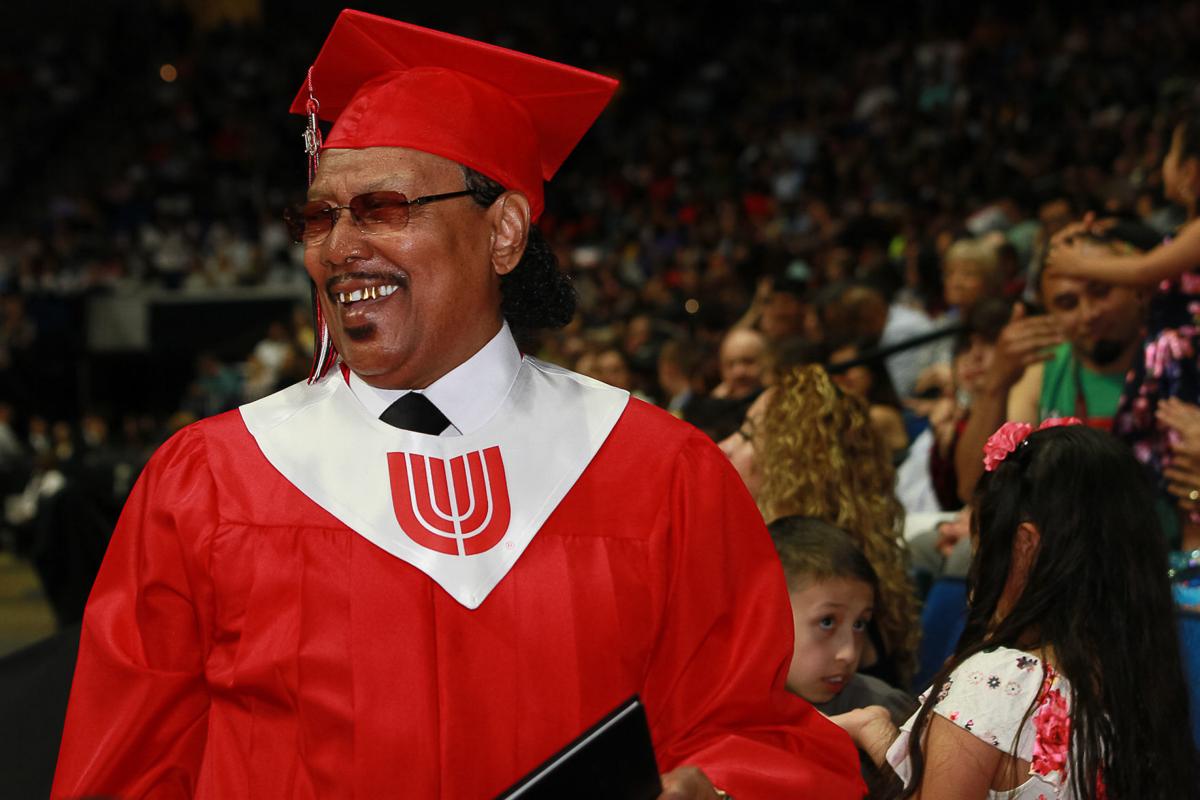 Leo Johnson, 77, was among the nearly 1,300 students to graduate from Union High School Monday at the BOK Center in downtown Tulsa. Johnson dropped out of Union during his senior year in 1959. Karen Mary Kinney/for the Tulsa World 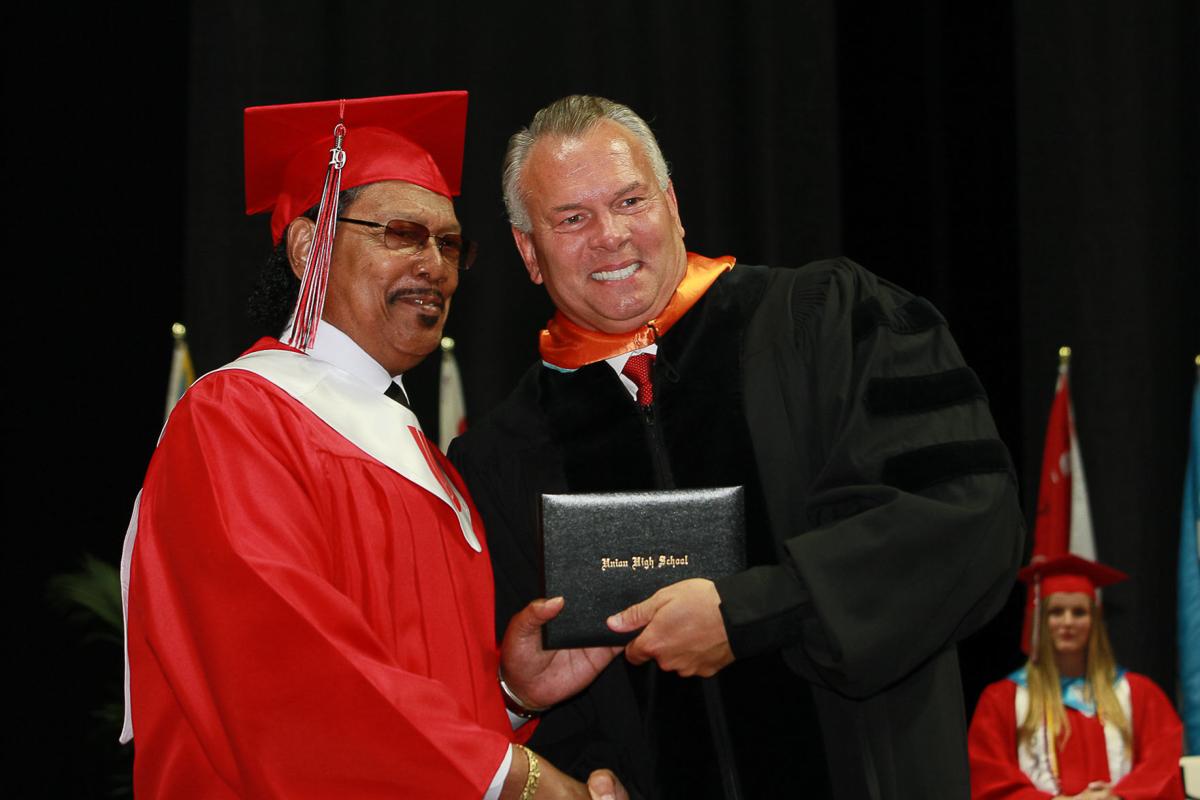 Leo Johnson receives his diploma from Union Superintendent Kirt Hartzler during the graduation ceremony on Monday. 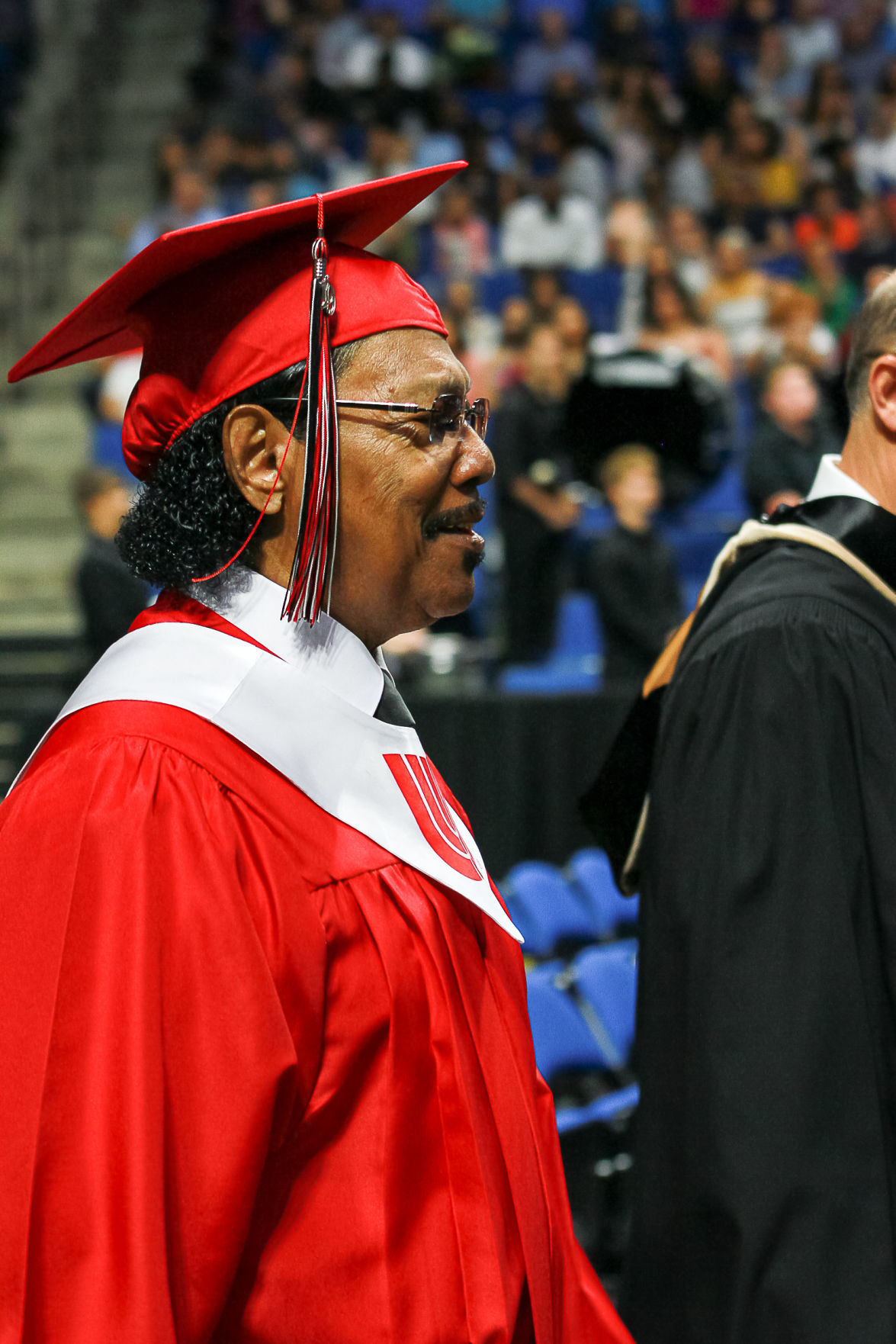 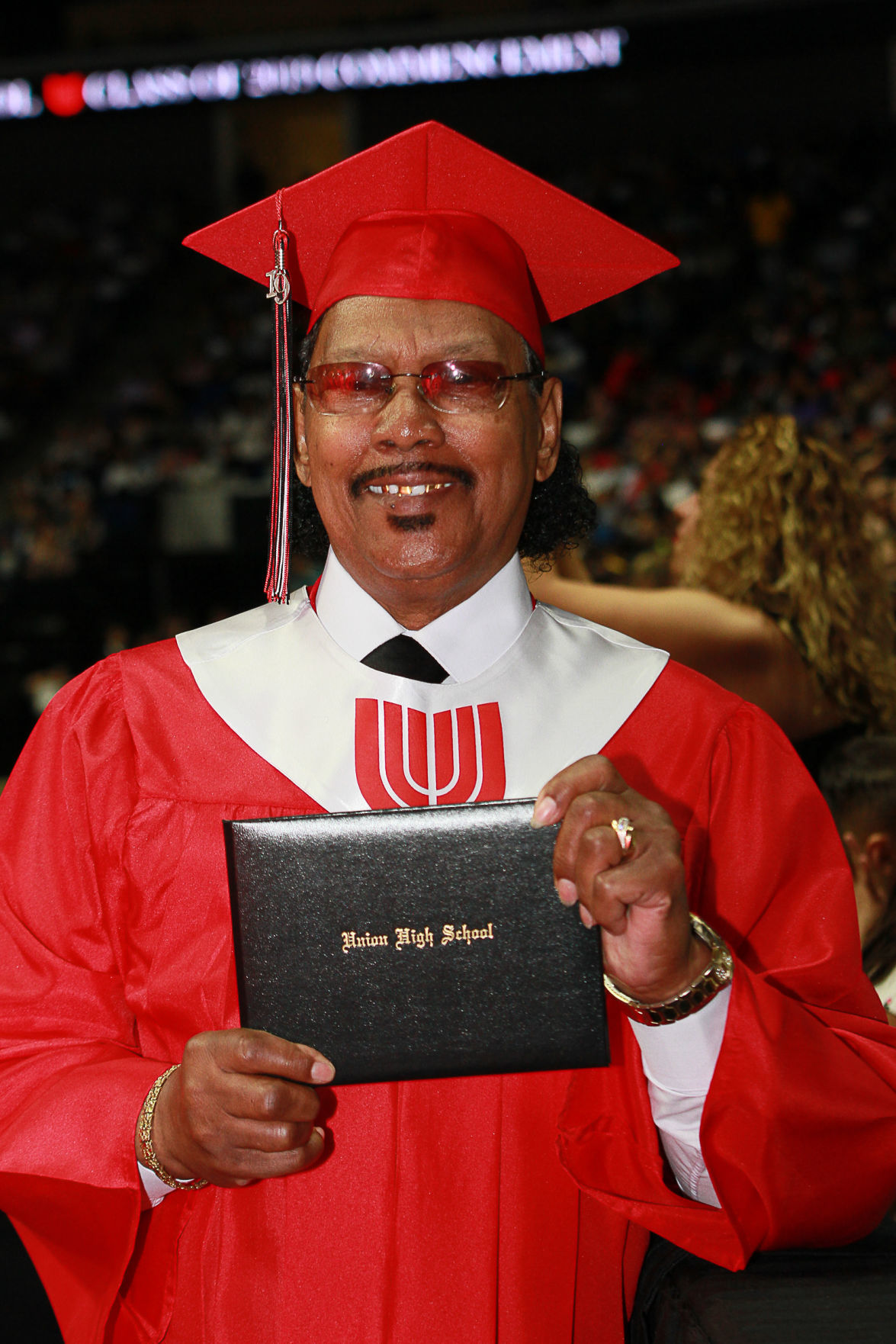 Leo Johnson, 77, was among the nearly 1,300 students to graduate from Union High School Monday at the BOK Center in downtown Tulsa. Johnson dropped out of Union during his senior year in 1959. Karen Mary Kinney/for the Tulsa World

Leo Johnson receives his diploma from Union Superintendent Kirt Hartzler during the graduation ceremony on Monday.

Of the nearly 1,300 students who graduated from Union High School on Monday night, Leo Johnson stood out.

That’s because the longtime pastor of a small church in north Tulsa is 60 years older than the other graduates, who included two of his grandchildren.

Johnson, 77, delighted in surprising the thousands of people watching the ceremony at the BOK Center.

Only a handful knew Johnson’s secret before his name was called during the superintendent’s commencement speech. He kept it hidden from family members in the audience. He even kept it hidden from the graduating grandkids sitting within shouting distance of him.

But the surprise was worth the wait. Johnson’s grandchildren are partly his inspiration to go back to school. He wanted to make the moment as special for them as possible.

As they grew up, it became difficult for Johnson to encourage them to finish school, knowing he never did all those years ago. He feared his failure would demotivate them. Yet when they asked about his graduation experience, he told them the truth.

Johnson dropped out of Union his senior year and spent the next 60 years living with regret. And according to him, it’s all because of a misunderstanding.

In 1959, he played on the football team and was two English courses shy of earning his diploma. He was on the verge of completing one of those classes when his teacher accused him of plagiarizing his term paper, which matched another student’s almost word for word.

That student, Johnson says, had snatched his paper from his locker and copied it, but the teacher took him for the culprit. The teacher told him he could redo the paper, but pride got the better of him.

“It really was my downfall when my teacher told me that,” he said. “I didn’t handle it the way I should have, but I was so upset. I told my mom, ‘I’m not going back. I know what I did, and I’m going to stand up for myself.’

“It wasn’t the right decision. I thought about that moment for years and years and years. It may have been in the back of my mind, but it was always there.”

Johnson worked 20 years in construction and 34 years for a private family. He started a family and opened the modestly sized God’s House of Prayer near 27th Street North and Trenton Avenue. He’s preached there — without salary — since 1998.

Johnson was diagnosed with cancer in 2015 and lost his job with the private family while on chemotherapy. He tried to find more work after going into remission, but the lack of a diploma or at least a GED certificate has made it difficult.

Having so much free time was troubling for a septuagenarian who first started working when he became a teenager. Johnson also needed an income to support his family. And he remembered the uncomfortable conversations with his grandchildren.

So a lifetime after leaving Union High School, insufficient job prospects finally compelled him to return. He approached Superintendent Kirt Hartzler about completing his diploma, and Hartzler obliged.

From November until last week, Johnson took computer courses from home to acquire the credits he lacked. The experience wasn’t easy.

“It was extremely tough, especially for a guy who waited 60 years before he hit the books again,” he said with a laugh.

But he persisted, earning the degree he believed he deserved all those years ago.

Now Johnson is glad to have a happy ending to tell his grandchildren. He’s eager to boost his resume and find a job.

Perhaps most of all, though, he’s proud of himself.

“In my own heart, I know I’ve finally achieved something that’s taken me years to make a decision about,” he said. “And I’m elated.”

The only person who might be more excited for Johnson is his wife, Charlotte Johnson, who stood by him every step of the way. She’d stay up late with him as he studied, despite having her own full-time job.

All that mattered to her, though, was that her husband finish what he started — no matter how long it took.

Learn more about snakes in Oklahoma from Aaron Goodwin, a 20-year zookeeper at the Tulsa Zoo.

Gallery: See which snakes in Oklahoma are venomous and non-venomous

Read the story: When it comes to snake sightings, be wary of social media but cautious during spring mating season