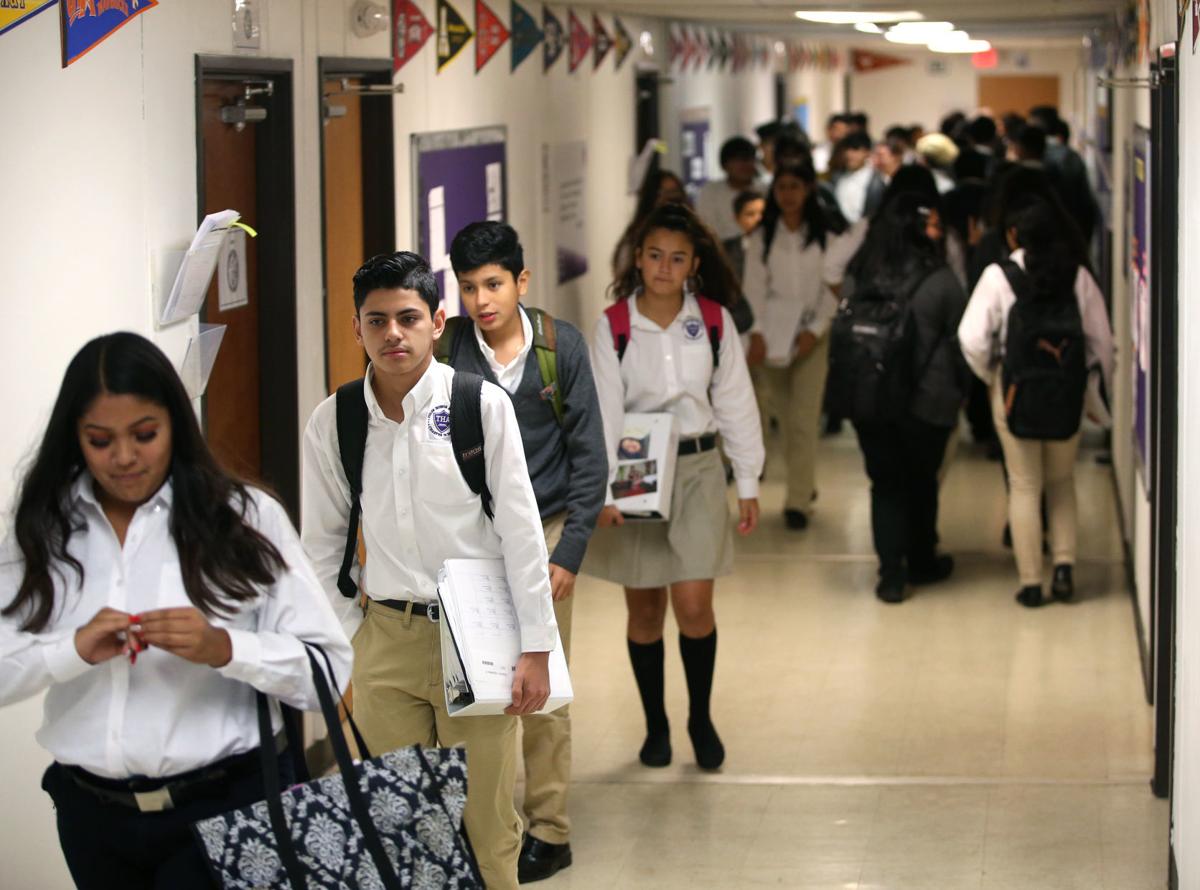 Students walk through the hallway at the Tulsa Honor Academy’s ninth-grade building, 6146 E. Third St., in Tulsa on Friday. The expanding school brought in a prefabricated building to accommodate its ninth-grade classes. MATT BARNARD/Tulsa World 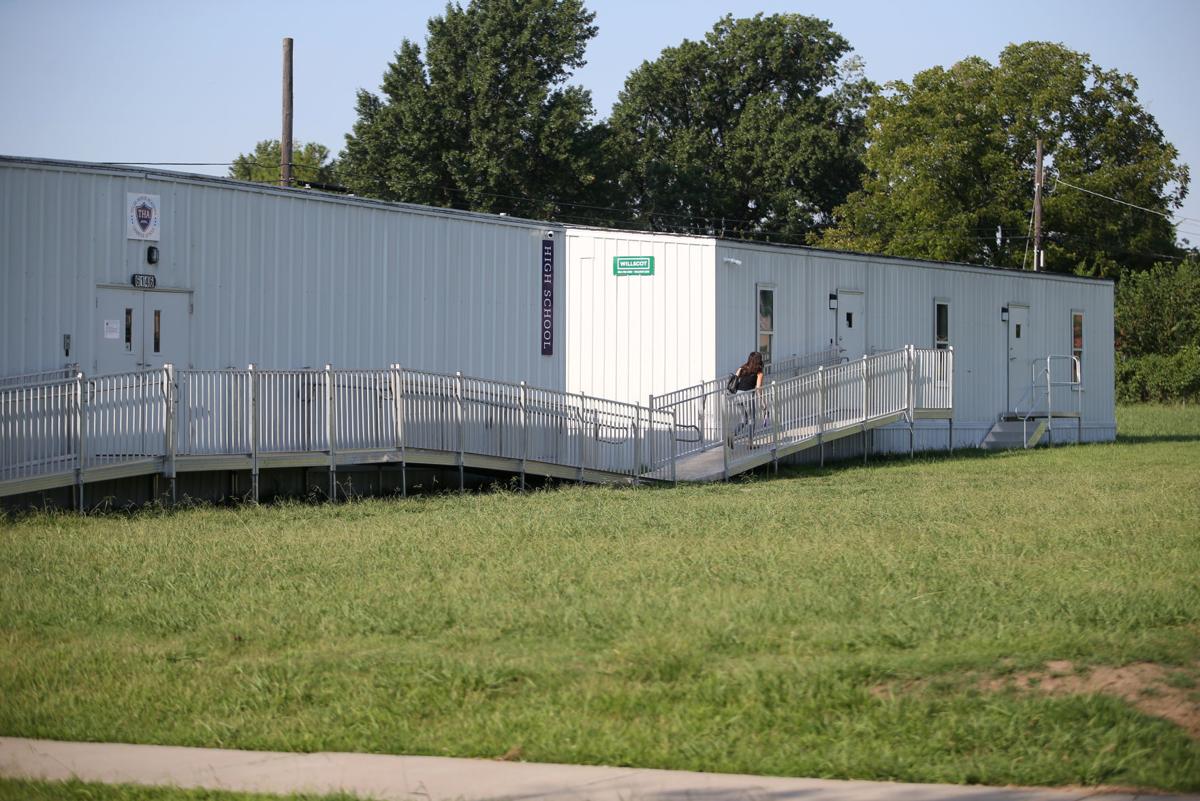 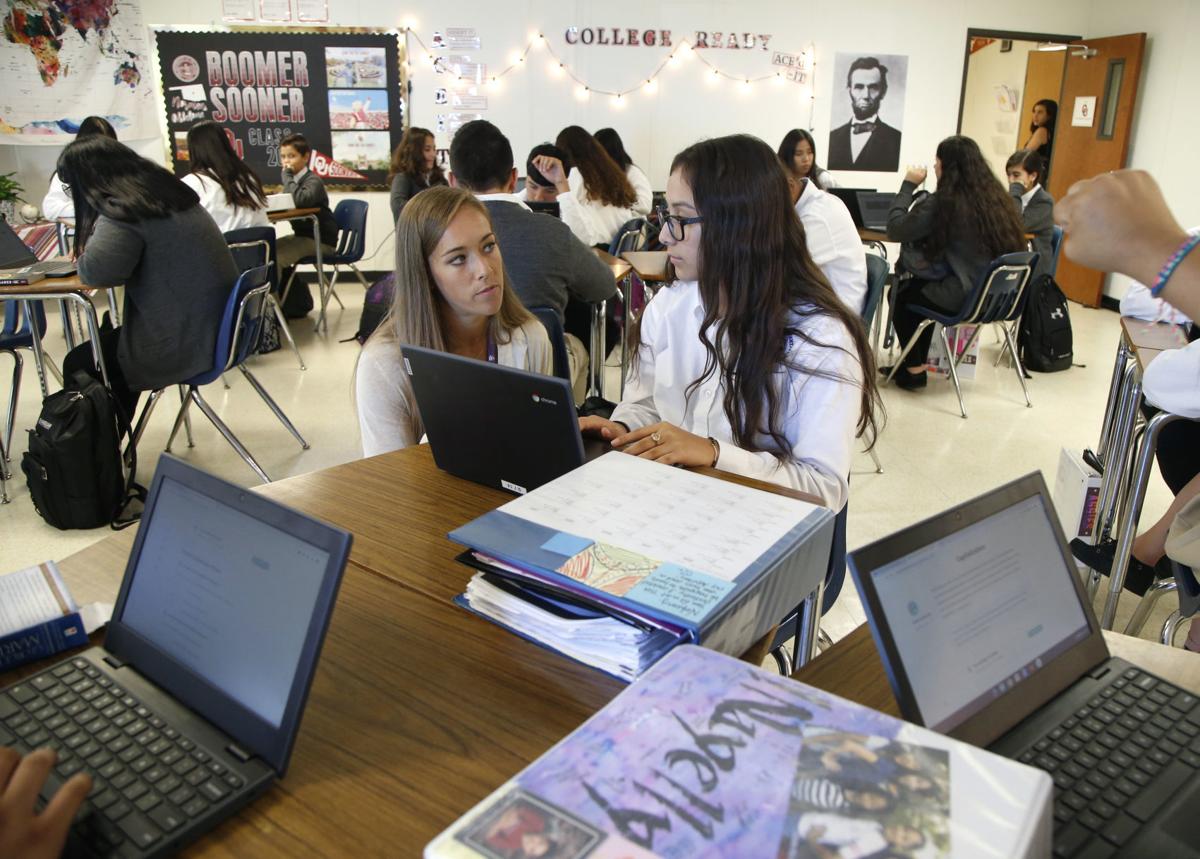 Brooke Lade (left) helps student Nohemi Avelar-Sanchez with an assignment during a creative writing and journalism class at the Tulsa Honor Academy’s ninth-grade building, 6146 E. Third St., on Friday. The expanding school is using a prefabricated building to hold its ninth-grade classes.

Students walk through the hallway at the Tulsa Honor Academy’s ninth-grade building, 6146 E. Third St., in Tulsa on Friday. The expanding school brought in a prefabricated building to accommodate its ninth-grade classes. MATT BARNARD/Tulsa World

Brooke Lade (left) helps student Nohemi Avelar-Sanchez with an assignment during a creative writing and journalism class at the Tulsa Honor Academy’s ninth-grade building, 6146 E. Third St., on Friday. The expanding school is using a prefabricated building to hold its ninth-grade classes.

In desperate need of a building to house its new high school, Tulsa Honor Academy brought one in from Arkansas with only months to spare.

Eleven trailers arrived at an empty lot across the street from the charter’s middle-school campus in early July. It took three and a half weeks to transform them into a functional school for about 100 ninth-graders, said Elsie Urueta Pollock, Tulsa Honor Academy founder and executive director.

“Well, I shouldn’t say functional because we were still waiting for electric to be installed,” Pollock said. “We actually ended up getting electricity in the building just two or three days before school started. So we were barely able to get it off the ground, but we did it.”

Facility expansion has been the biggest challenge for three Tulsa Public Schools-sponsored charter schools that are in the process of taking on additional grades.

For one, charters don’t receive the local tax dollars and bond money that traditional schools use to purchase buildings. Instead, they rely on already-limited state funding if they need a bigger space, said Eric Doss, director of quality charter services at the Oklahoma Public School Resource Center.

“What that means is they end up using the funds that are supposed to go in the classroom just to afford a classroom,” Doss said.

Growing pains have hampered Tulsa Honor Academy since it opened in 2015. The school, which originally served only fifth-graders and continues to add a grade every year, moved three times in its first month while a permanent place in east Tulsa was prepared.

When the first location inside the annex building at Rogers High School didn’t work out, the charter relocated to Monroe Demonstration Academy. That lasted a week.

“We had to leave Monroe because they needed their school back,” Pollock said.

Tulsa Honor Academy ended up moving into the permanent building months before it was ready. The school remained there for three years. It outgrew the facility with the addition of eighth grade and moved into the former Bell Primary Elementary, 209 S. Lakewood Ave., in 2018-19.

This is the first year of Tulsa Honor Academy’s expansion into high school. There’s no room for the approximately 100 new students inside the current middle school, prompting Pollock to order a mobile facility from out of state.

Pollock said she hopes to secure a permanent facility for the high school by 2020-21, but options are limited in east Tulsa. If she can’t find one before 10th-graders join the mix, she’ll have to install another temporary building.

“And we’ll have to add parking because at that point, our students will be sophomores,” she said. “So we’re just kind of sinking all this money into a facility that, at most, we’ll be able to stay in for two years.”

Expanding into high school hasn’t been any easier for KIPP Tulsa, which began serving freshmen in 2018-19 and welcomed sophomores this year. The remaining grade levels will be added during each of the next two years, with plans for up to 500 students when fully enrolled.

KIPP, which previously offered grades 5-8, opened the high school on the Oklahoma State University-Tulsa campus after its initial plan fell through to lease space at the Edurec Youth and Family Fun Center in north Tulsa.

Because there wasn’t enough room at OSU-Tulsa to accommodate the high school’s growing enrollment, KIPP officials scrambled to find a bigger space for its second year. The Tulsa school board in April voted to temporarily house the students, most of whom live in north Tulsa, at the vacant ECDC-Porter building in southwest Tulsa. The agreement was good for up to two years.

Don Parker, interim executive director at KIPP Tulsa, said the move wasn’t ideal, in part because Porter is nowhere near its student population. There’s also the issue of having high-schoolers attend a school designed for early childhood students.

“But other than that, it’s a nice, well-maintained building,” Parker said. “It’s serving our purposes very well this year. Plus, we’re used to taking what we can get in terms of facilities.”

The building is too small to be a permanent solution, however. School leaders continue to work with Tulsa Public Schools to identify another suitable location for when the high school outgrows Porter in 2021-22. So far, there haven’t been any viable options.

What happens if they can’t find a place in two years?

“Well, you can’t run a school without a building, right?” Parker said. “So the answer to your question is, I’ve got to find a facility. Now, it may mean that we have to throttle our expectations. We have a design for high school that could accommodate close to 500 students. If we are only able to find a facility solution that allows us to serve 300 students, then we will adjust our high school model.”

Collegiate Hall, meanwhile, plans to begin expanding to prekindergarten through third grade next school year. The charter, which currently offers grades 4-8, will add two grade levels per year at 60 students per grade, ending with a total addition of 300 students.

Like the others, Collegiate Hall has no room for more students at the facility it shares with Marshall Elementary near 56th Street and South Peoria Avenue. Multiple classes are taught in trailers behind the school.

It’s up to Nikhil Kawlra, executive director of the college preparatory school, to come up with a plan to acquire another building.

Right now, that plan is “up in the air,” according to Kawlra.

“I wish I could tell you we have a concrete plan in place, but those are details we’re still trying to work out,” he said. “Potentially, with the district. Maybe on our own.”

Although TPS approved the expansion, Kawlra said it’s not the district’s role to find Collegiate Hall a space to use.

The hardest part is coming up with the money. It could cost a quarter of a million dollars for Collegiate Hall to run its own building each year or several million dollars to purchase a property. With no local funding available, Kawlra said charter schools have to secure either a grant or take it out of their operating budgets.

Compounding the problem, he added, is the lag in funding for charter schools utilizing a slow-growth model, meaning they add a new grade each year.

State funding in Oklahoma is awarded to schools based on their enrollment from the previous year. Midyear adjustments are made in January, meaning charters don’t receive full funding for the annual influx of students until halfway through the school year.

“That’s the other major funding challenge, that you’re always playing catch up until you arrive at full growth,” Kawlra said. “For the first six months of the year, you’re operating on less money than you ultimately need, and then in January, that obviously rectifies itself. But until you have rectified it, it can be challenging.”