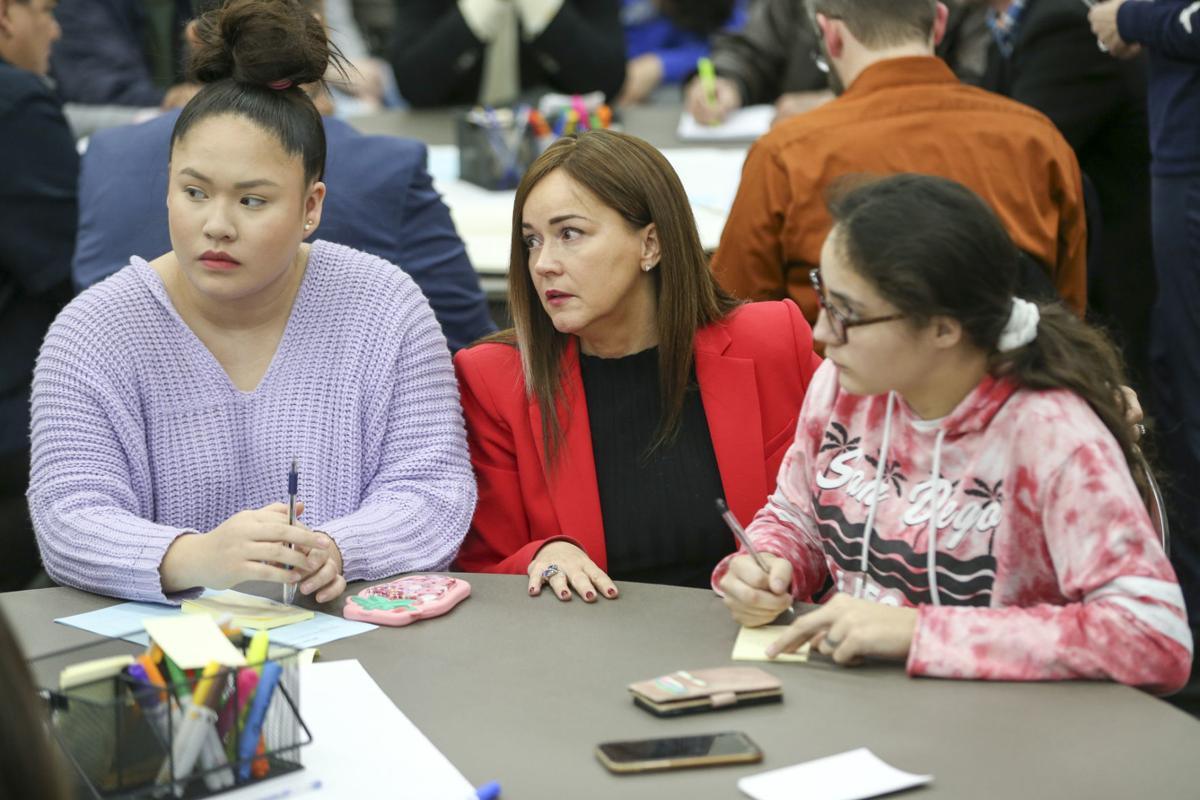 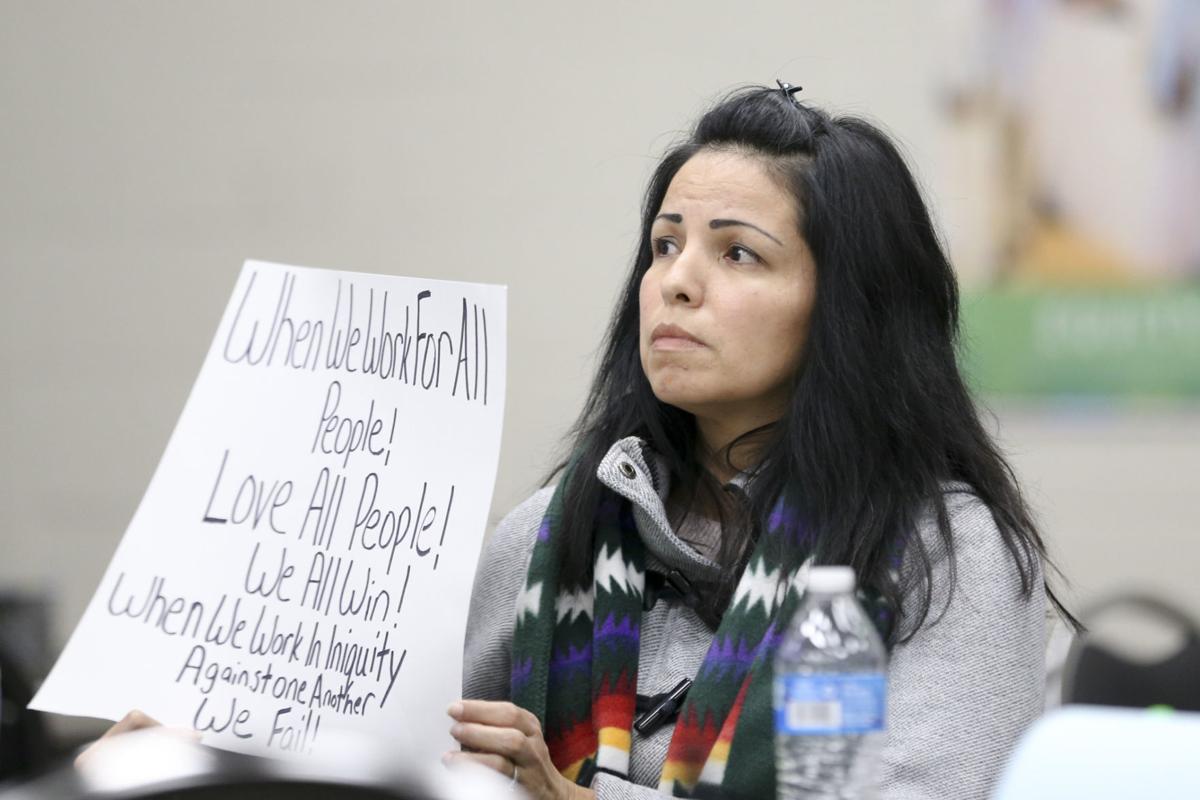 Rosie Lewis holds a protest sign during a meeting about the proposed changes to Tulsa Public Schools’ Indian Education Program at the Wilson Teaching and Learning Academy on Thursday. IAN MAULE/Tulsa World 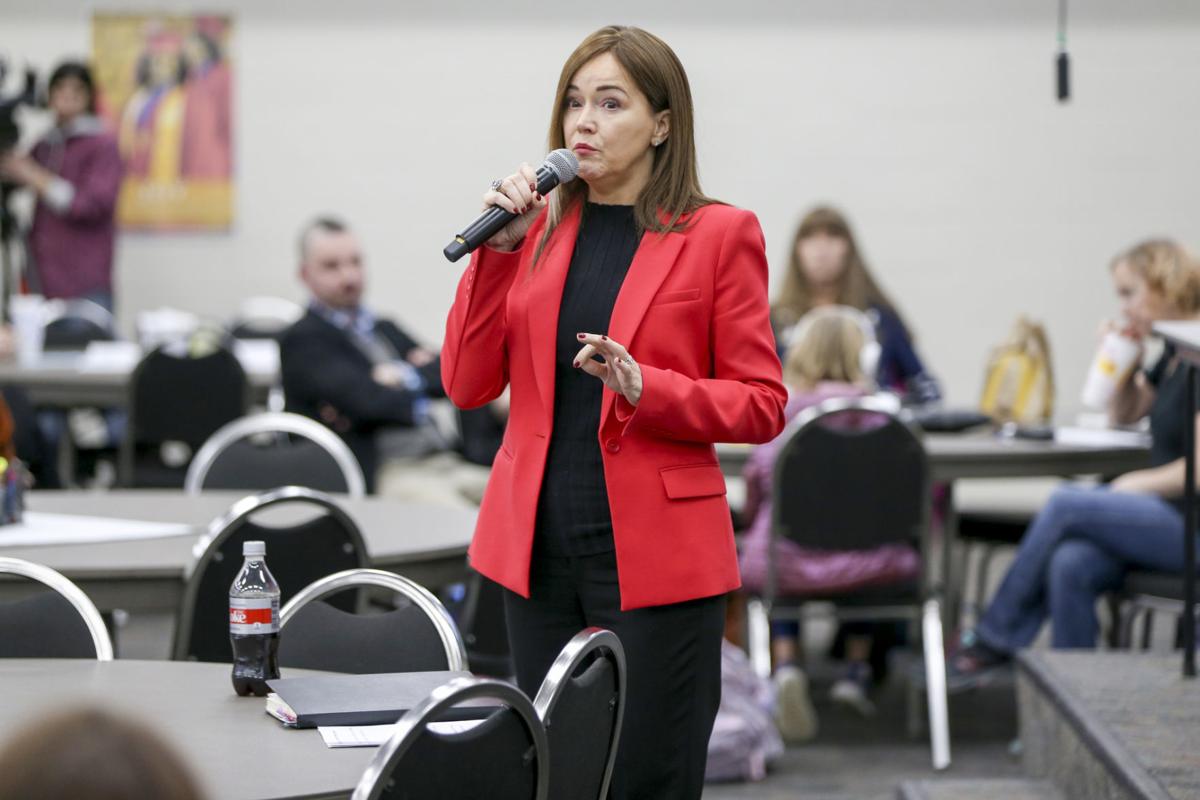 Rosie Lewis holds a protest sign during a meeting about the proposed changes to Tulsa Public Schools’ Indian Education Program at the Wilson Teaching and Learning Academy on Thursday. IAN MAULE/Tulsa World

Tulsa Public Schools administrators endured hours of heated scrutiny and ire from opponents of a proposed reorganization to the district’s Indian Education Program during a community meeting Thursday night.

Superintendent Deborah Gist said she hosted the meeting to spread awareness and hear from stakeholders about the proposed reorganization of the district’s Indian Education Program that would result in the elimination of seven resource advisers. The gathering lasted more than three hours as community members lambasted officials with critical questions and accusations that they were keeping native stakeholders in the dark.

TPS has faced considerable backlash since last week’s revealing of the proposed changes, which are part of a larger recommendation to delete 84 filled district office positions to cut about $6 million from the 2020-21 budget. Gist hopes to save $13 million to $14 million by reducing district office services to help offset a projected $20 million shortfall.

More than 100 people packed the meeting room at the Wilson Teaching and Learning Academy as Indian Education Program Manager Deidre Prevett started the night with a brief rundown of the most current reorganization plan. She said the program won’t shrink as a result of the changes if the recommendation is approved in mid-February and will remain at 13 positions. Instead of seven resource advisers on 10-month contracts next year, there would be three student specialists on 12-month contracts.

Additionally, the reorganized program would include a customer care associate to help with student registration and wrap-around services as well as expand after-school tutoring for eight months to all sites for native students. Tutoring services currently are available at 21 schools for four months of the year, Prevett said.

Following the explanation, administrators fielded a litany of questions and concerns from community members, many of which were written on notecards distributed at the beginning of the meeting.

One of the first questions asked why the positions are being eliminated if they are federally funded. Opponents of the Indian Education Program reorganization, including the Muscogee (Creek) Nation and the Greater Tulsa Indian Affairs Commission, have urged against cutting the positions because they’re funded through Title VI, which annually provides federal grant money based on the number of eligible students with 506 forms documenting native heritage.

Gist said the recommended changes surrounding the Indian Education Program are not related to the statewide budget cuts that have overwhelmed the Tulsa school district over the past decade. Rather, she said, they’re a response to reduced federal grant funding resulting from a decline in students with 506 forms. Title VI is funded on a per-pupil basis, and the number of eligible students reportedly has declined by more than 600 in at least seven years.

The superintendent said she is confident that more students are eligible but aren’t enrolled, and she said she believes these changes will help the program reach those students.

She also said federal allocations have not increased to accommodate a boost of more than $100,000 in salary and benefit costs in the past two years due to state legislation increasing teacher compensation. The three proposed student specialist positions, like the resource advisers they’re replacing, would be certified teachers and receive the state-mandated pay raises. The four new teacher assistants would not be certified or eligible for raises.

“The changes to the (program), that’s something that has to happen because we don’t have the funding to be able to maintain the office the way it is,” Gist said. “The question is not whether we do the reorganization but what should the reorganization look like?

One question that evoked a loud applause from community members asked district officials why they think it’s appropriate to leave the approximately 3,000 native students enrolled in the program with only three certified advisers.

TPS Chief Talent and Learning Officer Devin Fletcher said the 12-month contracts that would be afforded to the three new student specialists would allow them to reach students during the crucial summer months instead of just during the school year.

Fletcher agreed that it’s not acceptable to have only three certified advisers serving so many students. But he asserted that the decline in funding has forced the district to reshape the program to operate within financial constraints while also creating opportunities to best serve students.

In response to another question about why TPS is trying to expand the program when it’s receiving fewer resources, he said the goal is to direct money currently tied up in salaries to students who need additional support.

“The goal on the outset was really for us to ground in how do we get more dollars closer to our students, which means they have more opportunities to have meaningful experiences that will enrich their lives,” Fletcher said. “But we can’t do that when it’s all tied up in people.”

Another question centered on why Prevett was given an $89,619 annual salary — a nearly $24,000 increase over her predecessor’s salary — when she became the program manager in 2018. The district maintains that the boost was necessary due to the state-mandated pay raises in addition to the new position’s increased responsibilities and leadership duties.

Others community members and students expressed anger over feeling left out of discussions concerning the proposed changes until public backlash led to Thursday’s meeting. Officials say due process rights required them to refrain from disclosing details until after affected employees were notified.

Muscogee (Creek) Nation Ambassador Jonodev Chaudhuri, who was one of a few tribal leaders and representatives in attendance, criticized the lack of communication with the local tribes about the proposed changes and highlighted federal consultation guidelines outlining a minimum 30-day notice for matters involving tribal dollars.

“Given the fact that the programs at issue here are federally funded programs, (Johnson O’Malley) programs and Title VI programs, I think some of those lessons should be kept in mind,” Chaudhuri said. “That concept of meaningful consultation needs to apply to these discussions. I’m not sure that’s happened to this point. (But I am happy) that conversations are starting now. Better late than never, as they say.”

Many of the questions were directed toward the Tulsa Indian Education Parent Committee, which governs the implementation of federal grants. Committee members, including Chairwoman Hether Cuervo, took a recess from their own special meeting down the hall to participate in the discussion.

Cuervo answered multiple questions about whether the committee supported the proposed changes, saying she and the others also were there to get answers that would help them decide whether to endorse the reorganization.

“We are still gathering information, as well, and that’s why we want to hear from you and talk to you all and hear your questions, as well,” she said. “They’re a lot of the same questions that we’ve raised. We will be meeting before this proposal goes before the board.”