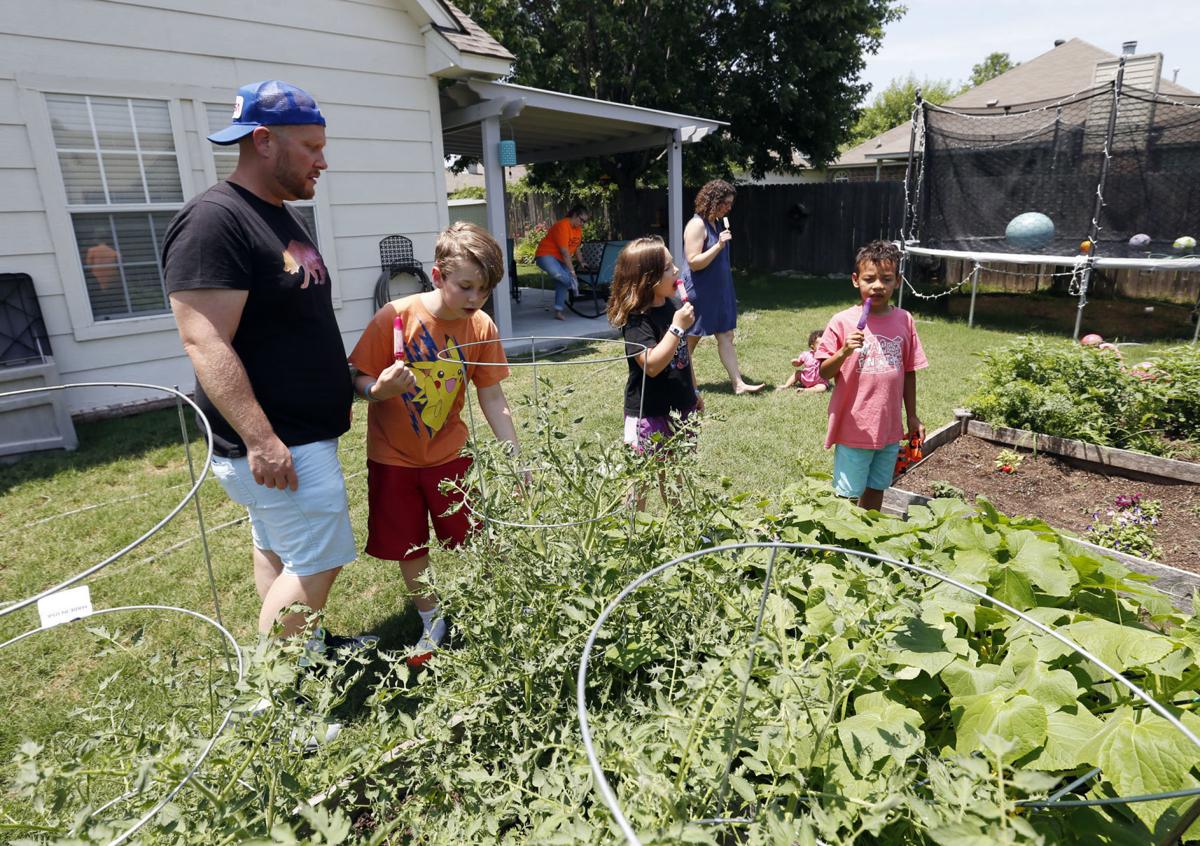 Adam Heare and some of his children, Jackson (from left), Nora and Matthew, check the garden at their new home in Broken Arrow. STEPHEN PINGRY/Tulsa World 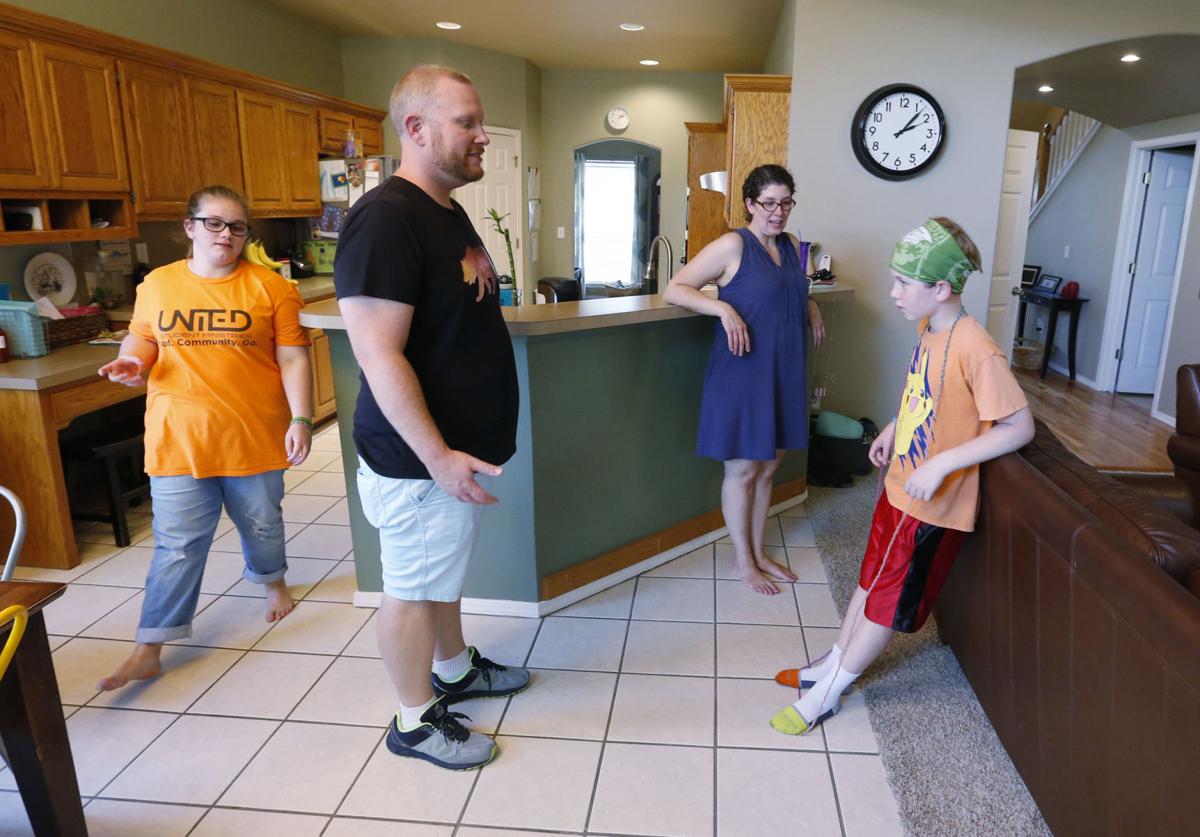 Adam and Kate Heare talk with their children Jackson (right) and Gwen in their new kitchen about their day at Vacation Bible School. STEPHEN PINGRY/Tulsa World 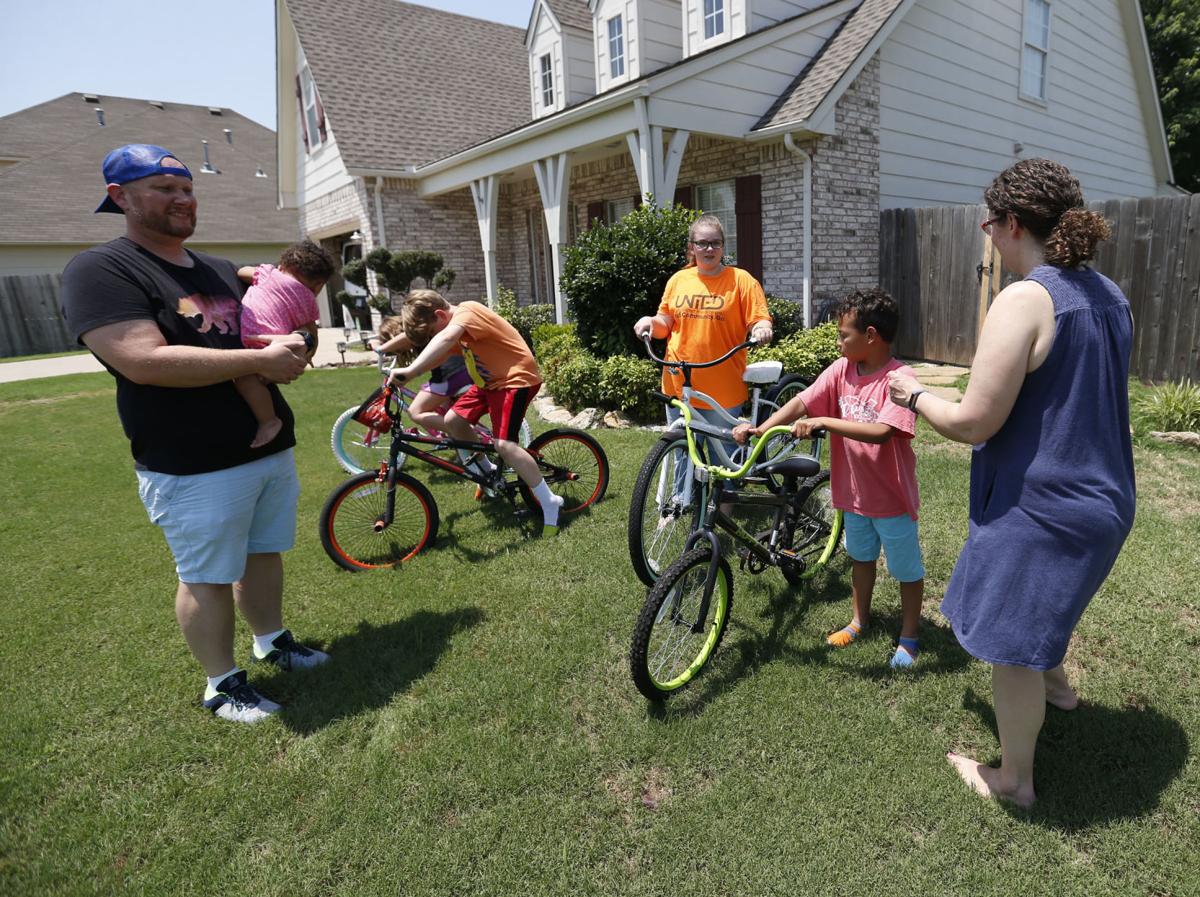 Adam Heare holds a foster child as his wife, Kate Heare, wrangles kids Nora (from left), Jackson, Gwen and Matthew as they get their bikes out at their Broken Arrow home. STEPHEN PINGRY/Tulsa World

Adam Heare and some of his children, Jackson (from left), Nora and Matthew, check the garden at their new home in Broken Arrow. STEPHEN PINGRY/Tulsa World

Adam and Kate Heare talk with their children Jackson (right) and Gwen in their new kitchen about their day at Vacation Bible School. STEPHEN PINGRY/Tulsa World

Adam Heare holds a foster child as his wife, Kate Heare, wrangles kids Nora (from left), Jackson, Gwen and Matthew as they get their bikes out at their Broken Arrow home. STEPHEN PINGRY/Tulsa World

Available for adoption: Meet the children featured in the Oklahoma Heart Gallery

Related story: Adam Daigle: It's hard to measure what being a foster parent has taught me

BROKEN ARROW — Adam Heare grew up an only child and always considered two-children families to be the perfect number.

Everything changed for Heare a few years ago on his drive home from work at the First United Methodist Church of Broken Arrow, where he is the modern music minister and contemporary worship leader.

“We already had two children. I couldn’t imagine, considering how busy we were, that we could grow our family.”

Heare and his wife, Kate, grew the family by taking in Matthew, now a 6-year-old adopted son.

They’ve also fostered as many as three children in addition to their three biological children.

If you are counting, that’s seven, for the only child who felt like two children would be the most he’d ever want to father.

“Life needs to be more than just what you want to do,” Heare said. “It is pretty easy to see that our foster child system in our state is kind of a mess. They keep cutting funding for it. So that tells me they need help.

“Honestly, bringing these children into our home with the three we already had has been awesome. Kate and I and the kids are a team. It’s good. We all work together to make it work. We have a lot of friends and family that also make this doable.”

Heare will be celebrating Father’s Day with six children on Sunday. One foster child was recently returned to a member of his biological family.

“We were so happy,” Heare said. “We had a child that was able to go home to his dad. That’s what being a foster family is. We are there to help, to be there for a child and their biological family as they work through some things. The whole point of fostering a child is reunification.

“Adoption is not the point of taking in a foster child. Sometimes that happens, but this is about being a good, solid family for what is often a very difficult time in a child’s life.”

The Father’s Day celebration at the Heare home will be in a new, larger house. They also recently changed from a regular-size minivan into a 10-seat van so that there would be transportation for the entire family.

“He’s a great dad,” Kate Heare said. “He does so much. We needed a bigger home, and Adam worked hard to fix up a home so that we could have more space.

“I grew up in a big family, so I understood how it could happen. It was tougher for Adam, but he never backed away from it. It was his idea, and he’s done so much to make it work.”

The Heare family had three children — Gwen, 14; Jackson, 11; and Nora, 8. Matthew, 6, is the child God urged Heare to find, and he was recently adopted.

Two other children, ages 10 and 1, are also currently a part of the family.

None of the process has been easy.

“But it is so worth it,” said Kate Heare. “It is so rewarding for all of us, not just Adam and I. The entire family, our biological children, adopted child and foster children, all get something out of this. …

“Sometimes the adopted and foster children have come through some sort of trauma. It is never easy. And to have so many children under one roof, you have to be pretty organized.”

“You just learn how to make it work,” said Kate. “We know a single mother that has several foster children.

“There are just so many children that need a family. All of those children have faced some difficulties. There is a huge need out there.”

The moment of truth for Adam Heare, as the father of the family, came during the process of getting the first foster child.

They applied through Circle of Care, a program through the United Methodist Church of Oklahoma.

The first thing that happened was an interview. Then, they went through a long process that included training sessions, screenings of family and friends, home inspection, financial records and “just about anything that could impact your ability to provide a good home for these children,” he said. “It was hard, but it is necessary. And in the end, it has been so well worth it.

“Children enrich your life in so many ways. Things were going so smooth when we had just two kids. But I knew we could do more. I knew it was the right thing to do.”

Want to help a child in need?

If would like to learn more about how you can become an approved adoptive family for Oklahoma DHS, contact Oklahoma Fosters - Foster Care and Adoption Support Center at 1-800-376-9729 or go to okfosters.org.