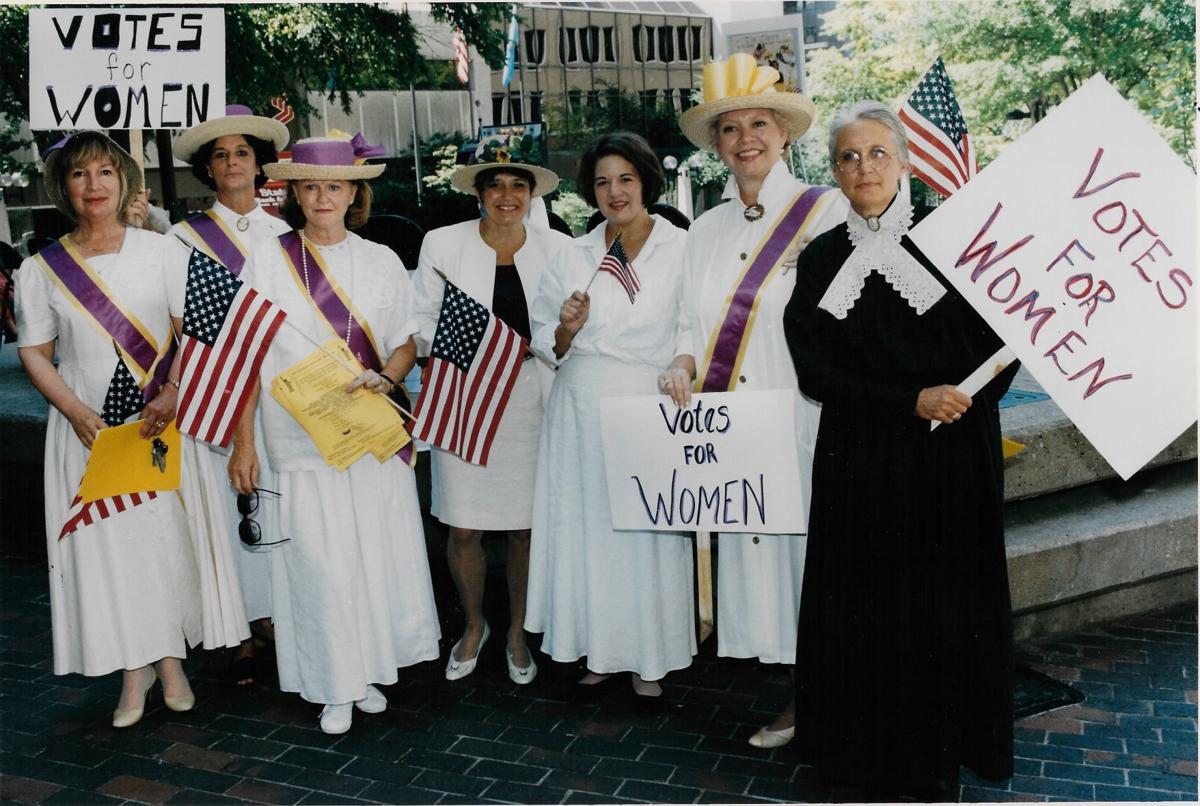 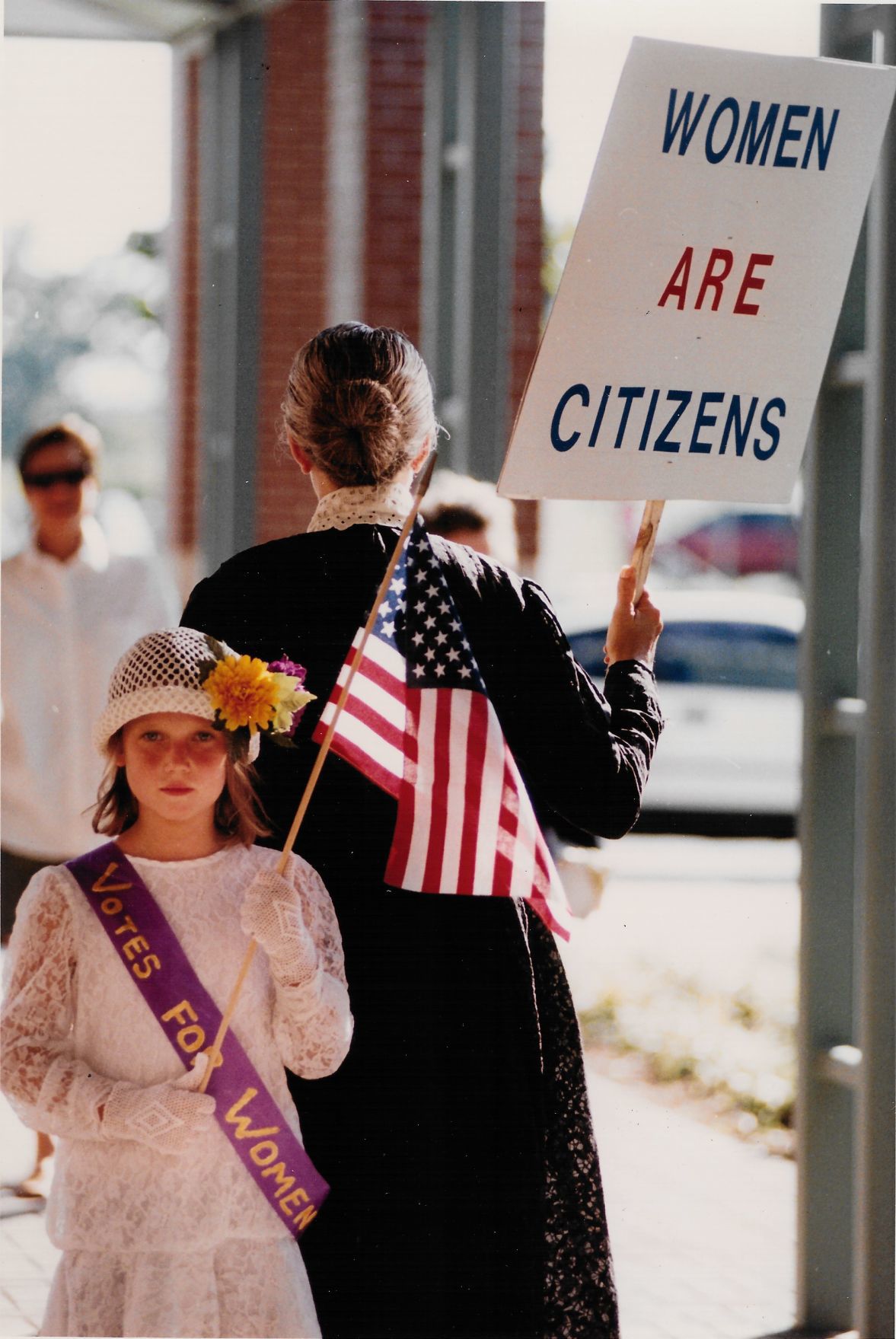 Taken in 1995, this was a celebration of women’s suffrage in Tulsa, featuring Penny Painter as Susan B. Anthony with Erin Riley, daughter of attorney Kay Bridger-Riley. Painter will give a live performance at a march and rally Feb. 22 at the Tulsa Historical Society. 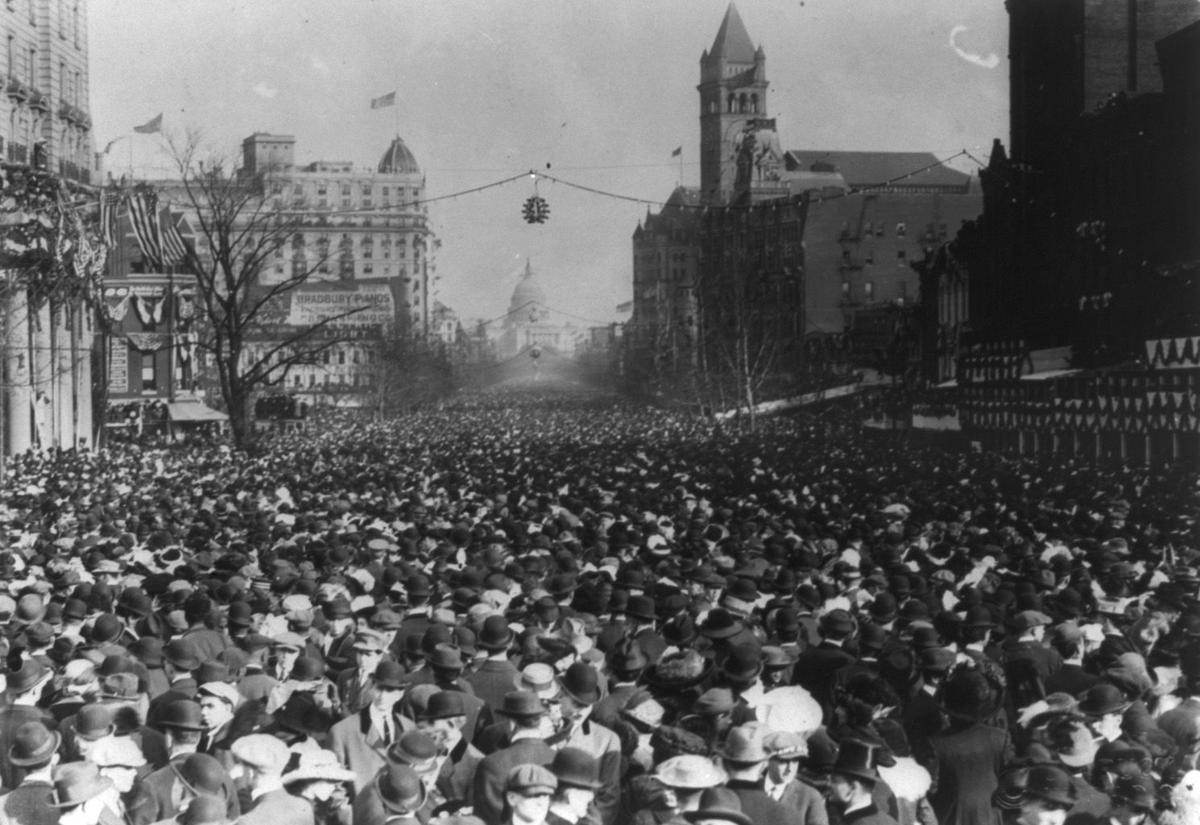 Taken in 1995, this was a celebration of women’s suffrage in Tulsa, featuring Penny Painter as Susan B. Anthony with Erin Riley, daughter of attorney Kay Bridger-Riley. Painter will give a live performance at a march and rally Feb. 22 at the Tulsa Historical Society.

Standing tall in a suffragist hat and sash, Sharon King Davis takes on the persona of Elizabeth Cady Stanton to give a first-person biography of the pioneering women’s rights activist.

In the 19th century, women began to strategize how to get voting rights while attending tea parties, sewing circles and other social events deemed appropriate. Laws denied them property, education, jobs and marital choice. They understood the power of political office.

“These were society women, and all of a sudden, they were bucking it all,” Davis said. “What they were doing was not applauded. It was considered disrespectful and unladylike. Yet, Elizabeth persisted.”

Stanton began her advocacy as an abolitionist then focused on women’s suffrage after meeting Lucretia Mott at an international anti-slavery convention in London. In 1848, the two held the first American women’s rights convention in Seneca Falls, New York, where Stanton presented her Declaration of Sentiments.

“I see her within myself in that when I see something in my city or a need that I feel strongly or passionately about, I go to the end on it,” she said. “Elizabeth Cady Stanton saw suffrage so clearly and with such passion.”

Davis will don her suffragist clothes and character as part of a kickoff to a year of events commemorating the 100th anniversary of the 19th Amendment. Joining her will be Penny Painter as Susan B. Anthony, Rebecca Marks-Jimerson as Ida B. Wells and Delesea Randall Griffiths as Carrie Chapman Catt.

The live performances are part of a free, public Women’s Suffrage March and Rally at 11 a.m. Feb. 22 at the Tulsa Historical Society, 2445 S. Peoria Ave. Participants are asked to wear traditional suffrage white or other 1920s-inspired attire with sashes, buttons and homemade signs.

The rally is to honor women who suffered as part of their activism; many were jailed, beaten and lost their families, livelihoods and reputations.

It’s also a time to remember the power of voting. Political cynicism is an unacceptable excuse for staying silent.

“For me, it’s a passion,” Davis says. “I’m hoping it lights a fire. I’m hoping it sparks that awareness in others … It’s important to know our history because that knowledge empowers us. We have foremothers who settled this country; the men just didn’t write about it at the time.”

Throughout the year, various organizations will be holding events and celebrations. Davis has convened about 42 groups and individuals to encourage participation.

The Tulsa Historical Society has been in this original coalition and is planning an exhibit.

“We want to talk about the federal 19th Amendment but also talk about what happened locally and in Oklahoma and controversies leading up to it,” said Executive Director Michelle Place.

“We are also exploring who did not get the right to vote including some African Americans and some tribes. We are still researching. It’s a complicated answer, not just for Oklahoma or Indian Territory but for different categories of freedmen.”

Oklahoma was the 21st state to ratify the amendment. Oklahoma voters approved suffrage for state elections after a 1918 statewide vote.

The Oklahoma Territory Legislature in 1890 gave women the right to vote in school elections.

Most black voters were Republicans, and the all-male, all-white Oklahoma Convention was controlled by Democrats.

There also were fears that women would vote as a bloc or as extensions of whatever their husbands told them to do. Suffrage was linked to divorce, low birth rates and socialism.

“May I not take the liberty of expressing my earnest hope that Oklahoma will join the other suffrage states in ratifying the federal suffrage amendment, thus demonstrating anew its sense of justice and retaining its place as a leader in democracy,” according to a Tulsa World Feb. 16, 1920, story.

After 1920, Jim Crow laws keeping black voters from the polls put even more importance on suffrage work. That fight led to the Voting Rights Act of 1965.

“That was passed in so many of our lifetimes or the lifetime of your mother or grandmother,” Place said.

The Tulsa Historical Society is seeking items related to women’s suffrage or from that era of burgeoning women’s rights.

“The problem is that it’s difficult to do an exhibit when you don’t have artifacts,” Place said. “So we are putting a call out to the community for anything handed down such as oral histories or written documents. We’d love to find buttons, sashes or anything to do with women’s suffrage, whether for or against.”

The League of Women Voters of Metropolitan Tulsa is placing all events related to the anniversary on its website. It will be registering voters at the suffragist march and can be available at any public event.

The anniversary of women’s suffrage is the same as that of the league. It was founded in 1920 in a merger of the National American Woman Suffrage Association and the National Council of Women Voters.

The league will be holding an event on April 19 to plant yellow roses at Tulsa Rose Garden followed by a tea party. Yellow roses were a symbol of women’s suffrage.

“We want people to remember the importance of voting and how women struggled to get that right,” said Lynn Staggs, president of the Tulsa league. “It was so long ago that people forget how hard people worked for that and how lives were on the line as they fought for it.

Even today, activists work to ensure voters are not suppressed.

Concerns about obstacles in voter identification, felony disenfranchisement, voter roll purges and changes in voter registration continue to be battlegrounds about voting rights.

Davis warns against backsliding about rights. She recalls being denied a bank loan — by a bank she worked for — because she was single. This is why she pushes for people to exercise their voting rights.

Through elections, people can change institutions. Elected officials reflect our values and are accountable to voters.

Voting has been in an ongoing litany of rights fought for by women to gain parity in education, workforce and family structures.

“I’m 72, not 172, and don’t want people to forget these things happened in our lives,” Davis said. “We’ve made progress, but we can slide back if we forget. We are not that far away from not having these rights.

“I do not want men and women, especially girls, to take for granted what those foremothers did for us. It is easy to lose what it is we have gained. We cannot forget.”

Participants are encouraged to dress in white (symbol of suffrage) and carry homemade signs.

Event is free but registration is requested for planning purposes. Go to tulsahistory.org/event/suffrage

In case of inclement weather, the event will be moved to inside the museum.