A former Tulsa police officer who was fired last month amid complaints about posts on his Facebook page filed a federal civil rights lawsuit alleging his termination was a violation of the First and Fourteenth amendments.

The nonprofit American Freedom Law Center and Tulsa attorney Scott Wood filed suit in Tulsa federal court on behalf of Wayne Eldon Brown against the city of Tulsa and Chief Chuck Jordan. Brown, who was part of the Tulsa Police Academy’s August graduating class, was fired Sept. 4 after the department received complaints about posts from 2013 to 2016 that a local advocacy group said expressed anti-government and anti-Islamic sentiments.

At the time, Tulsa Police Sgt. Shane Tuell said Jordan — who is being sued individually and officially — “immediately ordered Internal Affairs to open an investigation, and within 1 hour and 15 minutes of receiving the complaint, (Brown) was terminated.” But the lawsuit argues the decision to dismiss Brown based on the content and viewpoints in the posts, which were made before Brown was accepted into the Tulsa Police Academy, violated Brown’s constitutional rights.

Marq Lewis, a leader of local social justice advocacy group We The People Oklahoma, compiled Brown’s posts on the group’s Facebook page last month and called for Tulsa police to cut ties with him. The lawsuit calls Lewis a “local, radical left-wing political activist and agitator who has disdain for white police officers and hatred for President Donald Trump, considering both to be racists.”

Lewis said Wednesday that he was not among those who filed a formal complaint with TPD about Brown’s social media activity but declined further comment on the lawsuit.

Brown’s complaint identified Capt. Thom Bell and Capt. Luke Sherman as the officers who told him he would be fired and said an interoffice correspondence made it clear the termination was based on his posts. Tulsa police policies and procedures indicate personnel are prohibited from posting speech on social media with obscene or sexually explicit language, as well as comments that express bias against race, religion or other protected classes of individuals. 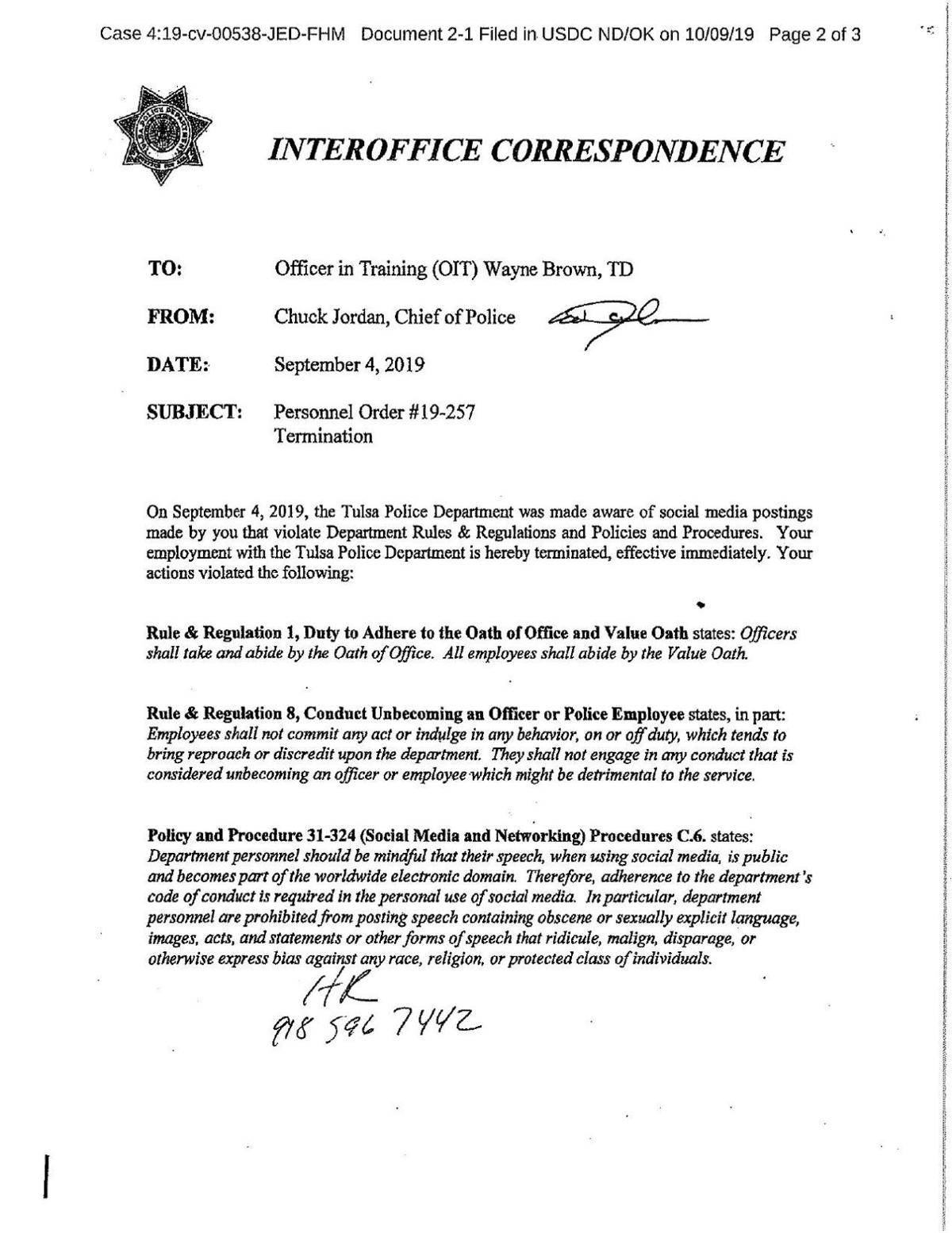 The lawsuit further alleges leadership in TPD refused to let Brown defend himself and said the firing made him “totally dejected, embarrassed and humiliated” because “his dream of being a police officer was over.” However, he claims Bell told him he believed the dismissal was “BS” but said “I have a job to do.”

Lewis’s post pointed out a photo on Brown’s account from November 2015 that said “when the day comes I will fight to my last breath before I submit to Islam,” along with a post from March 2016 that said “violence does solve problems.” A different post Brown shared in 2013 was from a Facebook page called “Stop Islamization of the world” in reference to “Texas Muslim Day” taking place at the Capitol in Austin, Texas. Brown’s profile had the comment “I expected better from Texas! WTF!!!”

The Tulsa World also observed Brown shared posts in 2013 from a group called “Oklahoma Volunteer Militia” in support of the Three Percenters movement. The Three Percenters are a self-identified militia movement group described by the Southern Poverty Law Center as being “loosely organized gun owners who vow to resist gun control laws with force if necessary.”

“These activists play the race and anti-Islam cards every chance they get because they hate white, conservative, Christian police officers,” AFLC Co-Founder and Senior Counsel Robert Muise said in a news release announcing the lawsuit. “It is a shame that the Tulsa police leadership was so willing to throw Officer Brown under the bus to appease these radicals. While the Tulsa leadership might side with these anti-police activists, I can assure you that the rank and file do not.”

The AFLC and one of its leaders, David Yerushalmi, are listed as being “anti-Muslim” on the SPLC’s website. The SPLC alleges Yerushalmi “is a leading proponent of the idea that the United States is threatened by the imposition of Muslim religious law, known as Shariah.”

Yerushalmi suggested in his own statement that the Council on American-Islamic Relations, which itself lists the AFLC as an Islamophobic organization, “may have played a role in our client’s firing.” He cited commentary from CAIR Oklahoma supporting the decision to fire Brown.

The lawsuit from Brown argues the city violated its policies when firing him because of a clause indicating personnel shall not be suspended, removed or demoted due to their religious or political belief. However, the policy Brown cited states sanctions are permitted “when such person advocates or belongs to an organization which advocates the overthrow of the government by force or violence.”

Brown has since been hired as a detention officer at the Rogers County Sheriff’s Office, with Sheriff Scott Walton saying he considered the old posts political in nature and did not believe they were concerning because no crime had been committed. Walton also said he thought Brown was not racist and called his firing in Tulsa an “example of spineless, coward leadership” similar to how he believes the department treated former officer Betty Shelby.

Walton hired Shelby in 2017 after she resigned from Tulsa Police in the months following her manslaughter acquittal in the shooting of Terence Crutcher.

Tuell last week said Tulsa police would not comment further with regard to Brown’s termination. The AFLC said Brown seeks $175,000 in damages and has also filed a notice of tort claim with the city of Tulsa, which has 90 days to respond. 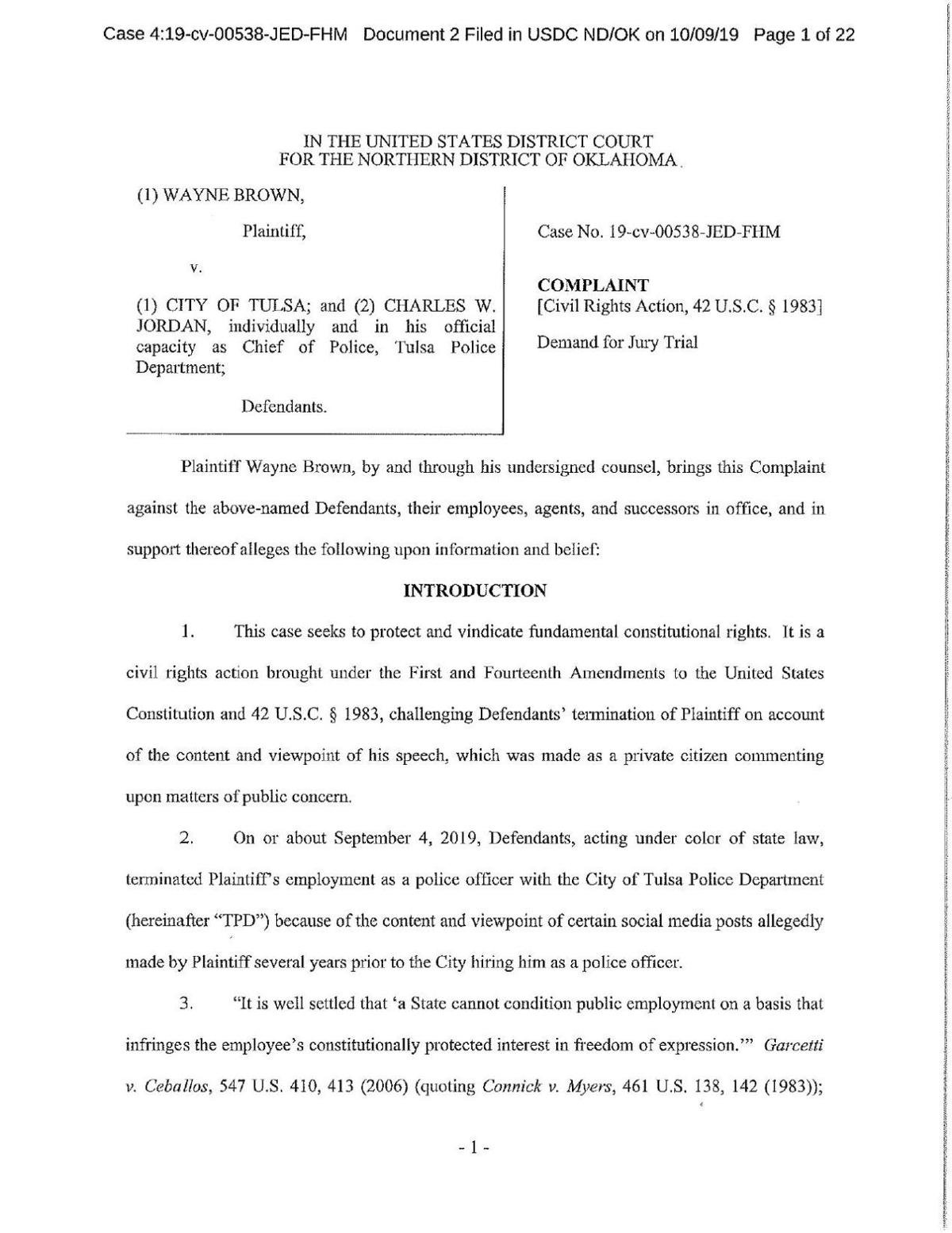