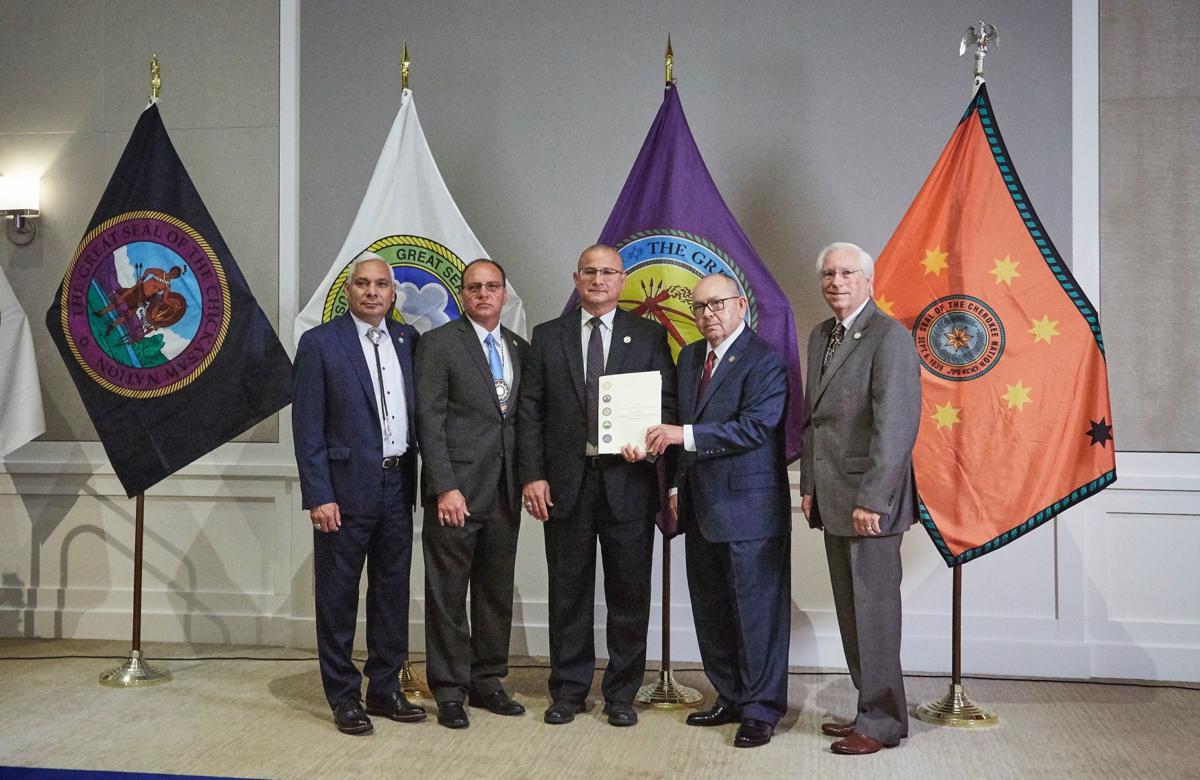 The top leaders of five major Oklahoma-based tribes said Friday that they reject Gov. Kevin Stitt’s call to renegotiate gaming compacts and said his recent actions cause them to “question his sincerity to work with us in a cooperative manner.”

Meeting in Tulsa, the chiefs of the Cherokee, Choctaw, Creek and Seminole nations and the governor of the Chickasaws, acting as the Inter-Tribal Council of the Five Civilized Tribes, signed a resolution Friday morning saying they “reject” Stitt’s apparent threat to terminate the compacts if they are not renegotiated.

The resolution is in response to a letter from the governor to the state’s gaming tribes and a piece written by him and published by the Tulsa World on Monday.

Stitt, meanwhile, said the tribes should not be surprised by his notice.

“Dating back to the campaign, I was transparent and clear that, as governor, I would seek a fair-market deal regarding the state’s tribal gaming compacts,” Stitt said in a written statement Friday afternoon.

Stitt said the current compact “established some of the lowest gaming fees in the nation,” and he is committed to open discussions with all tribal partners.

At issue is whether the tribal gaming compact agreed to in 2004 expires on Jan. 1, 2020, or automatically rolls over. The tribes say it rolls over; Stitt maintains it expires — or, as he put it in the letter to the tribes, terminates, on that date.

The compact itself seems a little confusing on that point.

At stake is many millions of dollars in revenue to the tribes and the state. Stitt maintains the exclusivity fees paid by the tribes to the state to keep non-tribal casinos out of the state are too low.

The tribes say otherwise and point out that much of the revenue they derive from gaming ultimately subsidizes services and infrastructure, including roads, schools and health care, that would otherwise fall to the state to provide.

Collectively, the tribes are also among the state’s largest employers.

Each tribe has its own compact with the state but the compacts are identical except for tribal identification. Stitt has said, in effect, he wants to rewrite the template, or “model,” compact negotiated during the early 2000s.

In his letter to the tribes, Stitt said he believes it is “necessary, prudent, and in the best interests of the State of Oklahoma and (the tribes) to begin negotiating the terms of a new gaming compact as soon as reasonably practicable.”

In his letter, Stitt cites Part 15, Section B, of the model compact, which states in part: “the Compact shall automatically renew for successive additional fifteen-year terms; provided that, within one hundred eighty (180) days of the expiration of this Compact or any renewal thereof, either the tribe or the state, acting through its Governor, may request to renegotiate the terms of subsections A and E of Part 11 of this Compact.”

Part 11, subsections A and E set out the terms of the exclusivity payments.

Part 15, Section C, which immediately follows the section cited by Stitt, says: “This Compact shall remain in full force and effect until the sooner of expiration of the term or until the Compact is terminated by mutual consent of the parties.”

So, in effect, the compact seems to say in one paragraph that it renews automatically (except, in some cases, for negotiation of exclusivity rights), and in the next says it remains in effect only until expiration or mutual agreement to terminate.

Friday’s resolution says “it is the position of the Inter-Tribal Council and the Five Civilized Tribes that compacts will automatically renew on January 1, 2020, barring any attempted bad faith interference arising from Gov. Stitt’s declarations.”

The resolution concludes by saying the tribes “reject the state’s attempt to unlawfully and unilaterally terminate the Compact,” oppose changes to the existing fee structure, and rejects renegotiation of the existing model compact.

The governor's letter requested the renegotiation of the Tribal-State Gaming compacts.

Matthew L. Morgan: Some things to keep in mind as Oklahoma and 31 tribes consider the future of gaming in the state