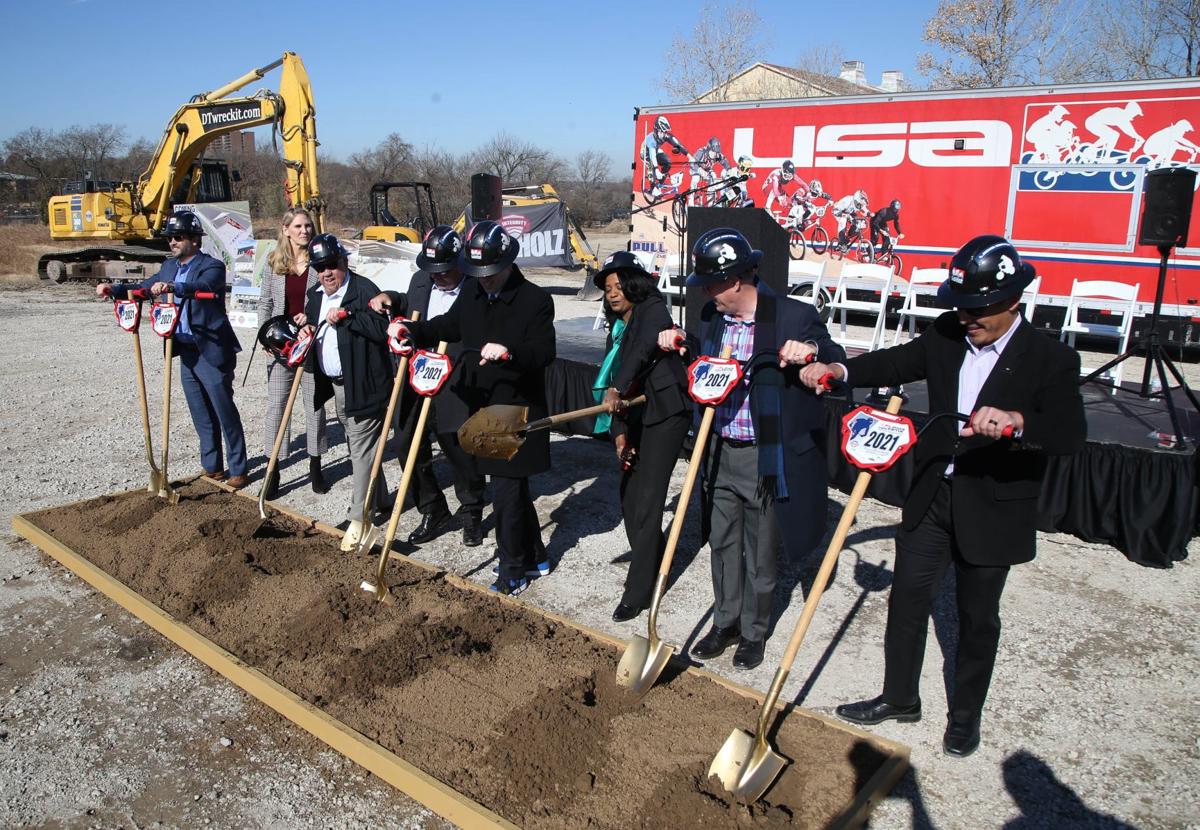 Local government leaders and members of USA BMX take part in a groundbreaking for the USA BMX facility at the former Evans-Fintube site in the historic Greenwood District. MATT BARNARD/Tulsa World 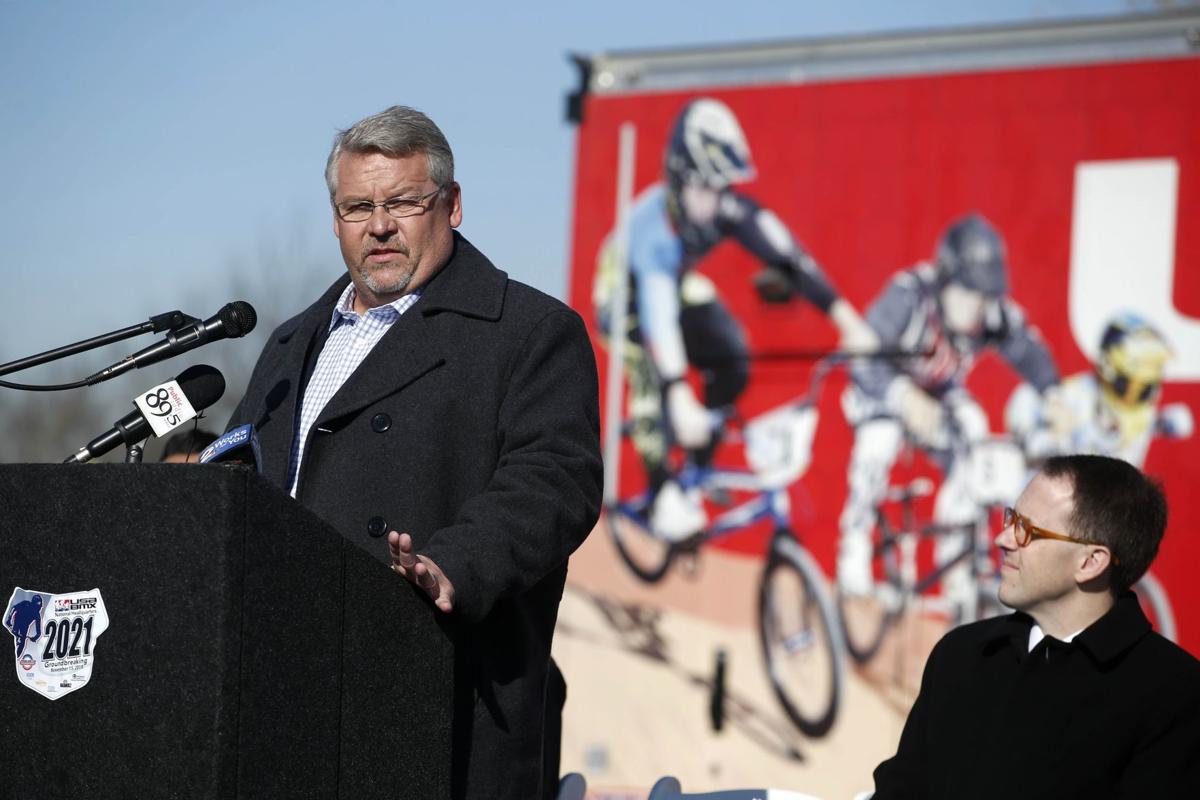 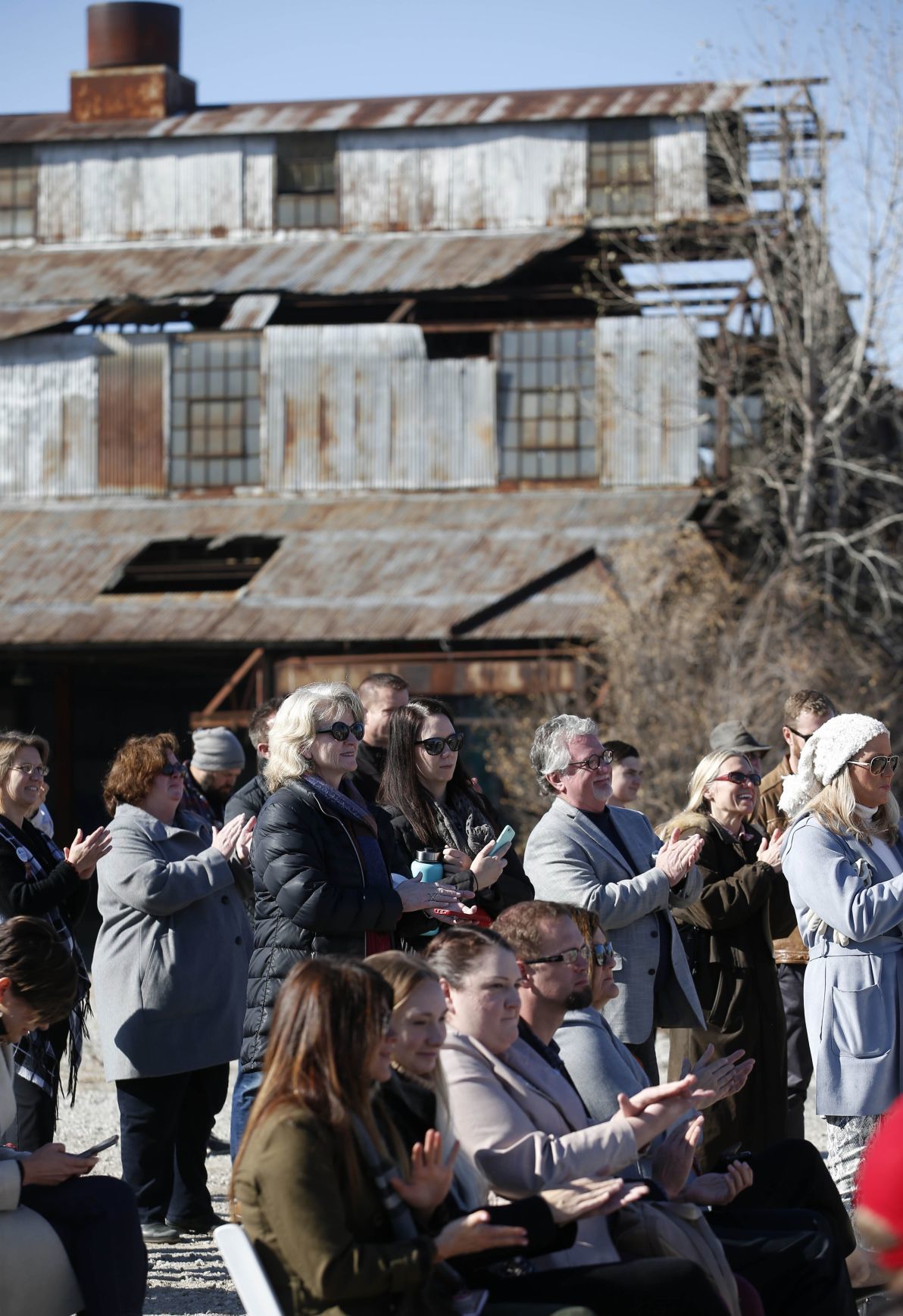 Audience members applaud at a groundbreaking for the USA BMX facility at the former Evans-Fintube site. MATT BARNARD/Tulsa World 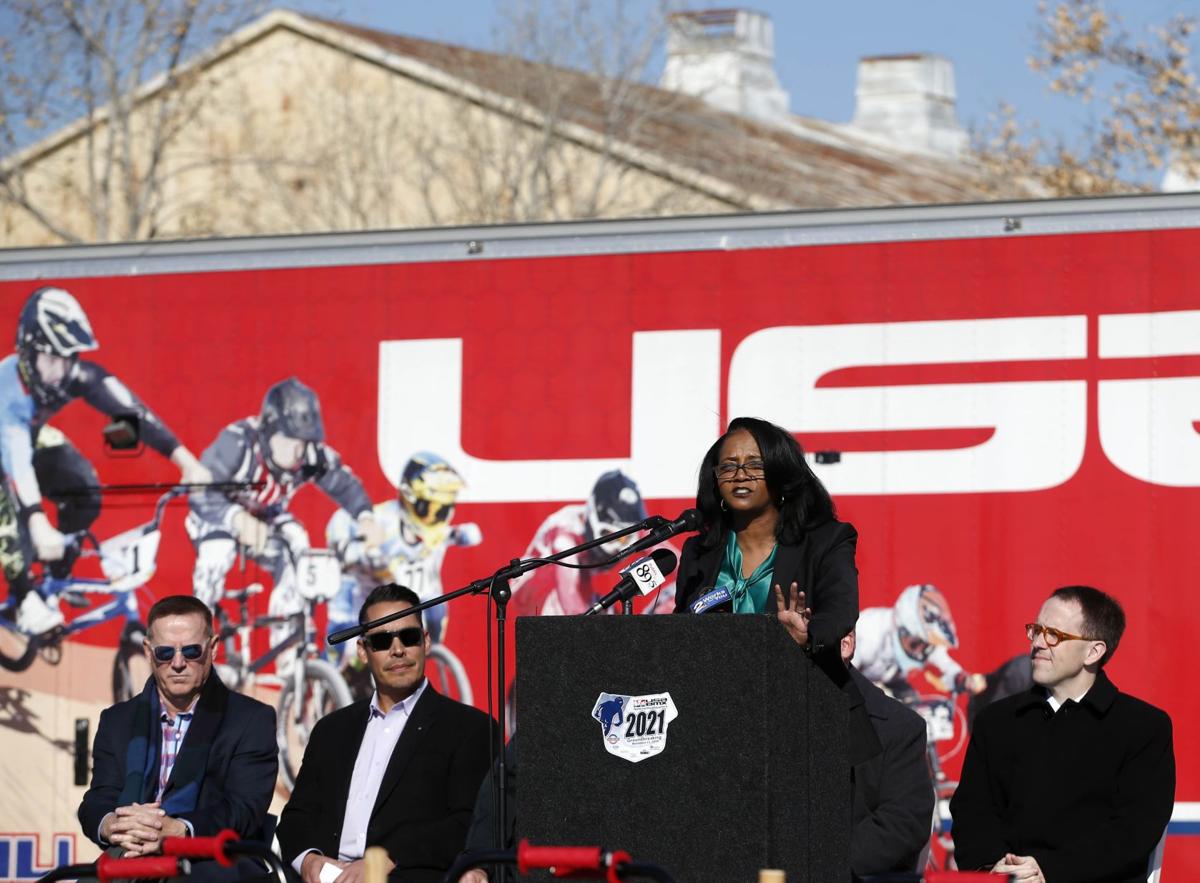 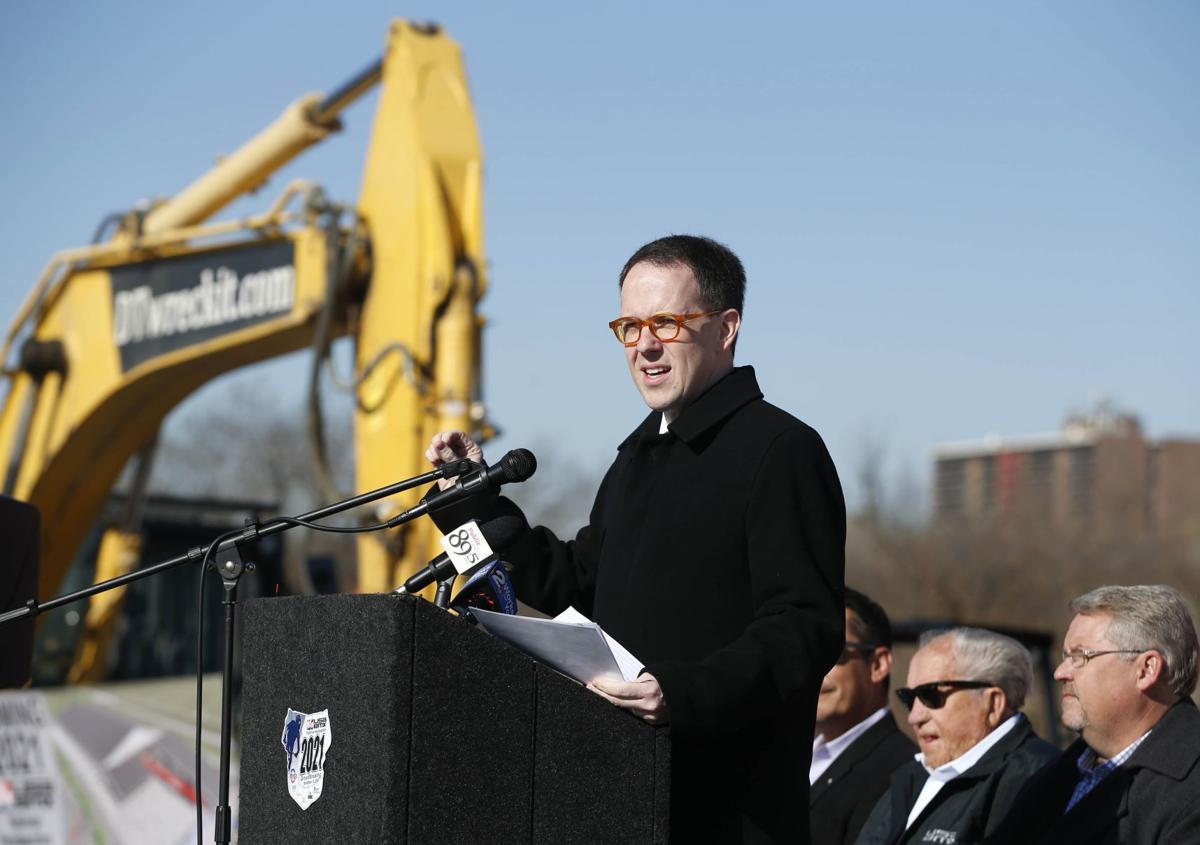 Local government leaders and members of USA BMX take part in a groundbreaking for the USA BMX facility at the former Evans-Fintube site in the historic Greenwood District. MATT BARNARD/Tulsa World

Audience members applaud at a groundbreaking for the USA BMX facility at the former Evans-Fintube site. MATT BARNARD/Tulsa World

After years of fits and starts that left many wondering whether USA BMX would ever relocate to Tulsa, Friday it happened.

More than 100 people gathered at the Evans-Fintube property north of downtown for a groundbreaking to celebrate the construction of an Olympic-quality track, a USA BMX headquarters building and a Hall of Fame museum.

“You are going to come back here in just a few years’ time, and this entire space is going to be transformed,” said Mayor G. T. Bynum.

The BMX facilities will be constructed on the north end of the 22-acre property. They are expected to include a 2,000-seat outdoor arena with a roof, an adjacent USA BMX headquarters and hall of fame, and an approximately 300-space parking lot.

The project is scheduled to be completed in 2021.

B.A. Anderson, CEO of USA BMX, said Tulsa is the perfect place for the organization’s new home. The group held its first Grand Nationals in Tulsa in 1983, and Expo Square has been host to the event every year since 1998.

“There is not a kid in the sport of BMX that does not dream of coming here to Tulsa to race his bike,” Anderson said.

It was that tie to Tulsa that led city officials to include $15 million in the 2016 Vision Tulsa package to relocate USA BMX facilities to the fairgrounds. The organization’s headquarters is presently in Gilbert, Arizona.

When negotiations for the fairgrounds site fell through, the project was moved to the long-abandoned Evans-Fintube property as part of a broader effort to help revitalize the historic Greenwood District.

City Councilor Vanessa Hall-Harper said Friday that she was initially torn about building the facilities in Greenwood. Not anymore.

“I do believe the best decision was made for the (Greenwood) community as well as for the city,” she said.

“It’s one of the life-long dream things that you never thought would have happened,” he said.

“If you go to the Grand (Nationals) in two weeks at the fairgrounds you’ll see some families that are up to four generations out there racing.”

The city’s contract with American Bicycle Association calls for the project to cost no more than $23 million.

In addition to the $15 million in Vision Tulsa revenue, the city will use $6.5 million in city funds, along with a $1.5 million donation from the Hardesty Family Foundation to USA BMX, to pay for the project.

Demolition of the Fintube building, on the north end of the site, is expected to begin in the next few weeks. The property is being cleared to make room for the parking lot.

The Evans building to the south, also known as the Oklahoma Iron Works Building, is on the National Register of Historic Places. It will remain on the property and be incorporated into the city’s request for proposals for a mixed-use development on the site.

City officials said they hope to have proposals in hand by the end of 2020.

“We are going to be the epicenter of cycling,” he said.

Anderson, the USA BMX CEO, said the new facilities will have an impact on the community that extends well beyond cycling. The group’s STEM program, for example, is already in 68 Oklahoma schools, and plans are to expand the program.

“So my promise to the city of Tulsa is every elementary-age student will experience the sport of BMX in some form or fashion, through building a BMX track at school, to assembling a bicycle, or participating here at the facility,” Anderson said.