Tim Fitzer handles an 8-pound, 6-plus-foot long rattlesnake outside his home near Haskell on Wednesday, March 18. 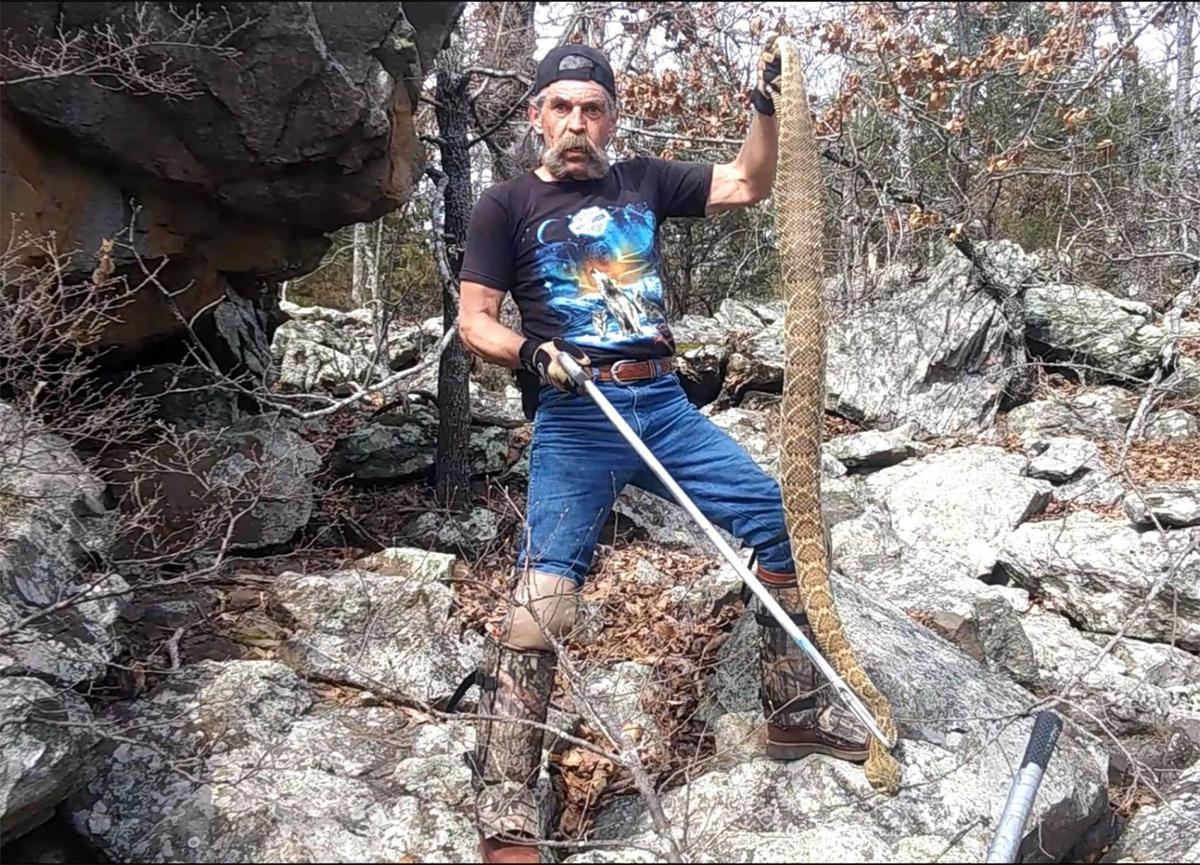 Tim Fitzer is seen with a 6-plus-foot long western diamondback rattlesnake he dubbed Rocket Man after it nearly escaped when this photo was taken in the hills of McIntosh County.

Tim Fitzer handles an 8-pound, 6-plus-foot long rattlesnake outside his home near Haskell on Wednesday, March 18.

Tim Fitzer is seen with a 6-plus-foot long western diamondback rattlesnake he dubbed Rocket Man after it nearly escaped when this photo was taken in the hills of McIntosh County.

Even an old hand at snake hunting can learn new tricks if he finds a tough enough snake to teach the lesson.

That was the case for Tulsa snake hunter Tim Fitzer, who met a 6-plus-foot-long, 8-pound Western diamondback last week that he dubbed Rocket Man after the snake launched past his eyes in a near-miss episode.

“He could have had either one of us, but he just launched out of the bag and shot down the hill. ... Then I had to chase him down,” Fitzer said of the snake he and hunting partner Brandon Dorris bagged — twice — last week.

Fitzer, a lifelong snake hunter and taxidermist, hunts rattlesnakes each spring on properties where landowners don’t want them around. He is known for being featured in Discovery Channel’s “Venom Hunters” series.

Some of the rattlesnakes he catches are used in taxidermy projects or taken by friends who go hunting with him to use the skins and eat the meat. Fitzer enjoys most that he catches — especially the 6-foot-plus “monsters” — as they stay in large herbariums on his back porch through much of the summer. He releases them on lands he keeps secret, where they have at least a fighting chance to establish a new home.

Fitzer and his partners have for many years bagged snakes using sacks that resemble a large pillowcase (actual pillowcases sometimes). They use a common method to restrain the snake by holding it a few inches behind the head with snake-catcher’s tongs and holding up the tail with their opposing hand.

The snake goes in head first, and when the head is at the bottom of the bag, the tail is dropped in and the tongs are released and pulled out in one smooth motion as the bag holder quickly gives it a twist to close it with another set of tongs to finish the job.

That didn’t work with Rocket Man.

“I’ve never seen anything like it. He shot out of there and past my face, right in front of my eyes, before I even got the tongs out of the bag,” Fitzer said.

“We were lucky,” Dorris said as he held an imaginary bag. “He just shot out of there and just happened to go this way,” he said pointing to his left. “But if he had gone this way, or that way, he would have gone right into one of us. ... I’ve never seen one do that before.”

The speed and agility of this snake had Fitzer convinced it was the largest of its kind he has handled. But using certified scales borrowed by the Oklahoma Department of Wildlife Conservation Fisheries Division, the weight hit 7 pounds 15 ounces, just about a pound less than a 6-plus footer he caught this time last year.

On Thursday Fitzer displayed a bag he has from Midwest Tongs that is 60 inches deep and jet black. It is his new go-to bag for the monster snakes, he said.

He brought the big snake outside his home and showed how the bag, either propped open on the ground or lying flat, could attract the snake to essentially bag itself.

“They live half their life underground, and that’s their natural space,” Fitzer said. “I’ve known it but just never had the need to use the black bag before.”

Dana Savorelli, inventor of the Pro-bagger System, which comes with an extending butterfly-net like hoop, said he knows a lot of people use bags just as Fitzer has for all his years, but he said he would never do it that way.

“That was always the goal, to operate hands-free, so you never directly touch that snake,” Savorelli said. “If you’re someone like Tim who is really experienced, then OK, but for most people I see these guys holding a bag open so someone can drop the snake in, and I don’t want to be that guy.”

The large black bag was actually developed for catching 14-foot king cobras 20 years ago, he said. Snakes like cobras have no problem at all springing up and out of a suspended bag.

The concept worked well, even to the point where snakes entered the bag on their own, even without the aid of snake handler’s tongs or hooks.

“The snake is trying to get away from you, looking for a hole or a crevice to escape, that’s the concept at least. ... We’re always changing and developing things whether it’s materials or whatever to make things better,” he said of the snake-capturing world. “We evolve with things constantly.”

Gallery: Nature-inspired activities for all ages

Herpetologist Aaron Goodwin, a zookeeper at the Tulsa Zoo and avid "herper," advises the public to be aware of snakes, but not afraid.

Here are some tips for those of us who live in snake country:

Snakes are active in springtime: Snakes are first active in late March and are seen more and more through May. When summer’s heat pours on they become more nocturnal.

“Bunches” of snakes: In April and May snakes also are out looking for each other for mating season, so that is the time you’re more likely to see snakes together. Typically they are solitary.

Know your snakes: Most parts of Oklahoma are home to some kind of snake. Know your surroundings and what kinds of snakes might live nearby. Use a field guide or a website like oksnakes.org or the Oklahoma Snake Identification Network group on Facebook to learn what is around.

Snakes can help: Snakes actually are an “indicator species” and sign of a healthy environment. They help keep rodents and other critters in-check.

Watch your step: If you know you’re in snake country wear shoes that cover your toes and watch where you’re walking.

Mind your hands: When moving debris around the yard or lifting up things that have been lying on the ground for some time, mind where you place your hands and stand to the side as you lift.

Preventative measures: Keeping the lawn cut short and removing wood piles or other things from your lawn a snake might like to curl up under can help keep snakes away from your property.

Just walk away: Most snake bites are a result of people trying to catch a snake or dispatch it. Snakes are generally mobile and solitary creatures. If you leave it alone it will probably just go away.

Venomous snake bites: Swelling and pain are to be expected. Don’t panic but go to the nearest emergency medical help available. Try to get there within an hour or so of the bite. Healthcare professionals will determine the needed care once the wound is examined.