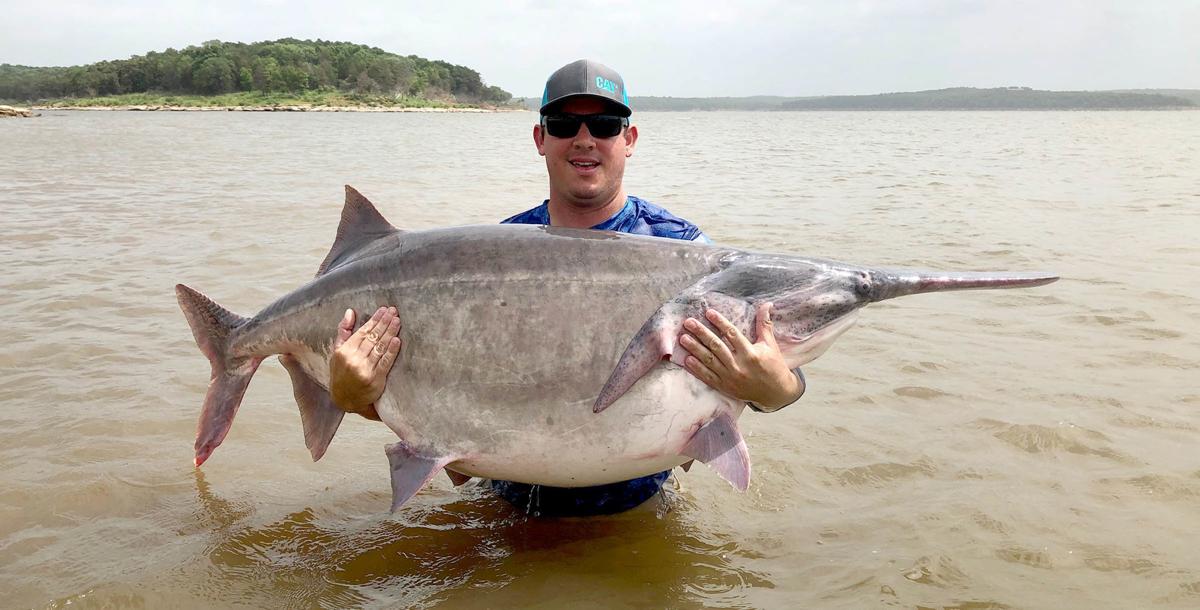 James Lukehart of Edmond holds what is likely a new world record paddlefish at Keystone Lake Sunday. The fish weighed 146 pounds 11 ounces, was 70.5 inches long and 45 inches in girth. It beat the world record by more than 2 pounds. JASON SCHOOLEY/ODWC/Courtesy 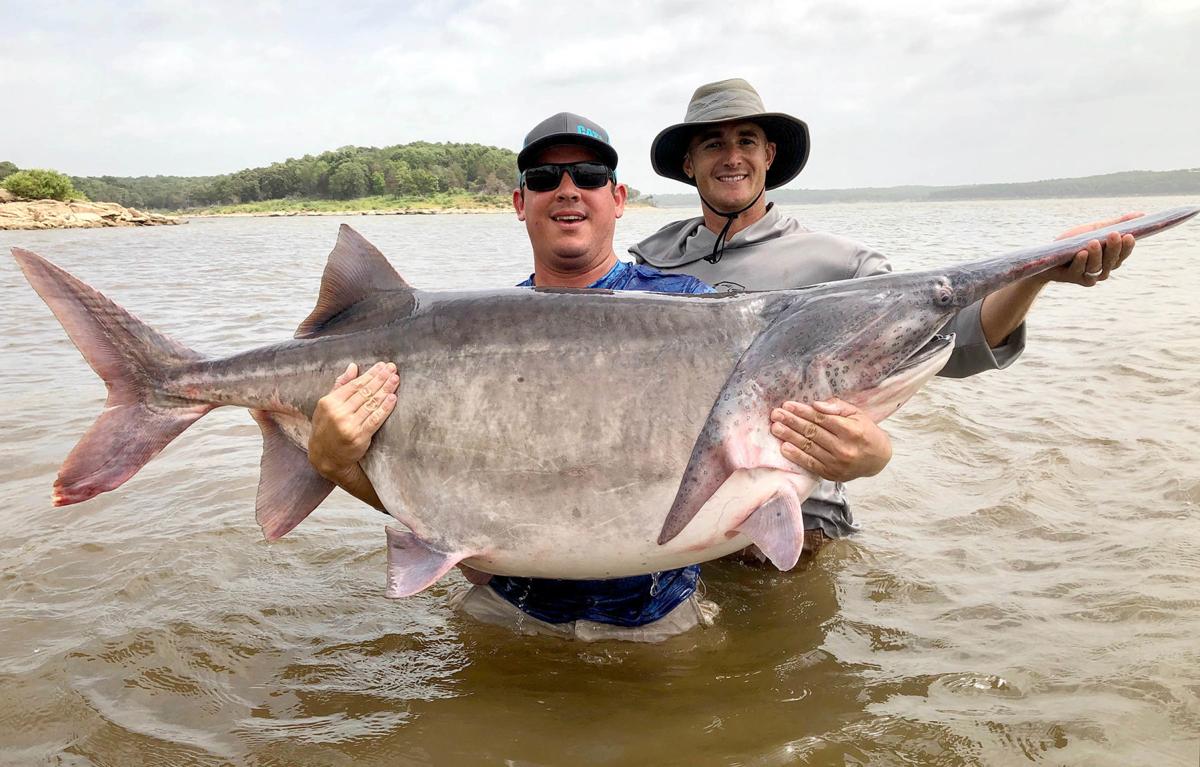 James Lukehart of Edmond with guide Jeremiah Mefford of Reel Good Tim Guide Service holds what is likely a new world record paddlefish at Keystone Lake Sunday. The fish weighed 146 pounds 11 ounces, was 70.5 inches long and 45 inches in girth. It beat the world record by more than 2 pounds. JASON SCHOOLEY/ODWC/Courtesy

James Lukehart of Edmond holds what is likely a new world record paddlefish at Keystone Lake Sunday. The fish weighed 146 pounds 11 ounces, was 70.5 inches long and 45 inches in girth. It beat the world record by more than 2 pounds. JASON SCHOOLEY/ODWC/Courtesy

James Lukehart of Edmond with guide Jeremiah Mefford of Reel Good Tim Guide Service holds what is likely a new world record paddlefish at Keystone Lake Sunday. The fish weighed 146 pounds 11 ounces, was 70.5 inches long and 45 inches in girth. It beat the world record by more than 2 pounds. JASON SCHOOLEY/ODWC/Courtesy

A couple from Edmond who hired a Keystone Lake guide Sunday thought they’d put some paddlefish on the dinner table. Instead, they were served up a new world-record 146 pound, 11-ounce paddlefish — and they let it go.

“Everybody says they want to go out and catch a record,” James Lukehart said. “We kind of joked around about it, but really we just wanted something to bring home and eat it for dinner tonight.”

Lukehart said he is “more of a hunter” but his wife, Caitlin, loves to fish and so he only recently got back into fishing. Last year they went to Missouri’s Lake Taneycomo for rainbow trout.

“The trout fight, but it was nothing like this,” Lukehart said of the barrel-like, prehistoric fish that measured 70.5 inches rostrum-tip to fork of the tail and sported a 45-inch girth.

“It was exciting,” he said Sunday afternoon. “It’s only been about four hours since we caught it. My wife filmed everything and I’m finally watching the video. My facial expressions, and I don’t think I said anything too improper, it was just total excitement.”

Until Sunday, the biggest fish he caught on a rod-and-reel were farm-pond bass, crappie and catfish, although he did handle some 40- and 50-pound catfish while noodling with an uncle when he was younger.

“You get these close to the boat and they just take off and run again,” he said.

His new official state record beats the one set just a month ago by his own guide, Jeremiah Mefford of Reel Time Guide Service. That fish weighed 143 pounds. It was 76 inches tip of its paddle-like rostrum to tip of its tail. Mefford guided a Keystone angler over the winter caught a fish that weighed — unofficially — 157 pounds, so another world record likely is still out there.

Mefford has dialed in on a snagging technique using Garmin LiveScope sonar that has proved invaluable in snagging the fish with barbless treble hooks, as well as in monitoring the fish for successful release.

Jason Schooley, a senior fisheries biologist with the Oklahoma Department of Wildlife Conservation’s Paddlefish Research Center, traveled to the lake to certify the weight and measurements and assist in releasing the fish according to ODWC regulations.

The previous world record was a 144-pound fish caught in Kansas, he said.

Because paddlefish are not a “sport fish” that takes a lure or bait and must be snagged, there is no category for them with record keepers like the International Game Fish Association. Instead, these records are noted by biologists in scientific literature. Schooley said he likely will be published with the American Fisheries Society.

Because regulations do not allow anglers to cull paddlefish throughout a day’s fishing, setting the record depends on the availability of the biologist if the angler wants to release the fish.

The guide and angler knew how to handle the fish to keep it alive. Lukehart said he jumped out in the shallows and waded around with the fish to keep water moving over its gills until Shooley arrived. The biologist said it took some effort to help the fish recover from its stress, but thanks to the ability to watch the fish after it was released with the LiveScope sonar, they could leave knowing the fish would be OK.

“When we first pulled it up, I think my wife wondered if there was going to be something else up on our wall,” Lukehart said with a chuckle. “But this is one that if we had the ability it is definitely one I wanted to release to give someone the chance to have the experience I did catching that thing today.”

As for lifting the heavy fish on his own for photos, he shared a tip. “She floats pretty well in the water, then you get your hands right and you just have to bend your knees and lift properly,” he said. “I was definitely ready to put her back down though.”

Caitlin Lukehard also caught and released an 82-pound paddlefish before they caught the record-setting fish. And they landed a 55-pound fish tagged and took home for dinner.

“We’re fixin’ to get it brined up and put it on the smoker for dinner,” he said.

Living and playing on Tulsa Time: Check out summer events returning and reopening in June

Play at the park

Time to go back to the movies