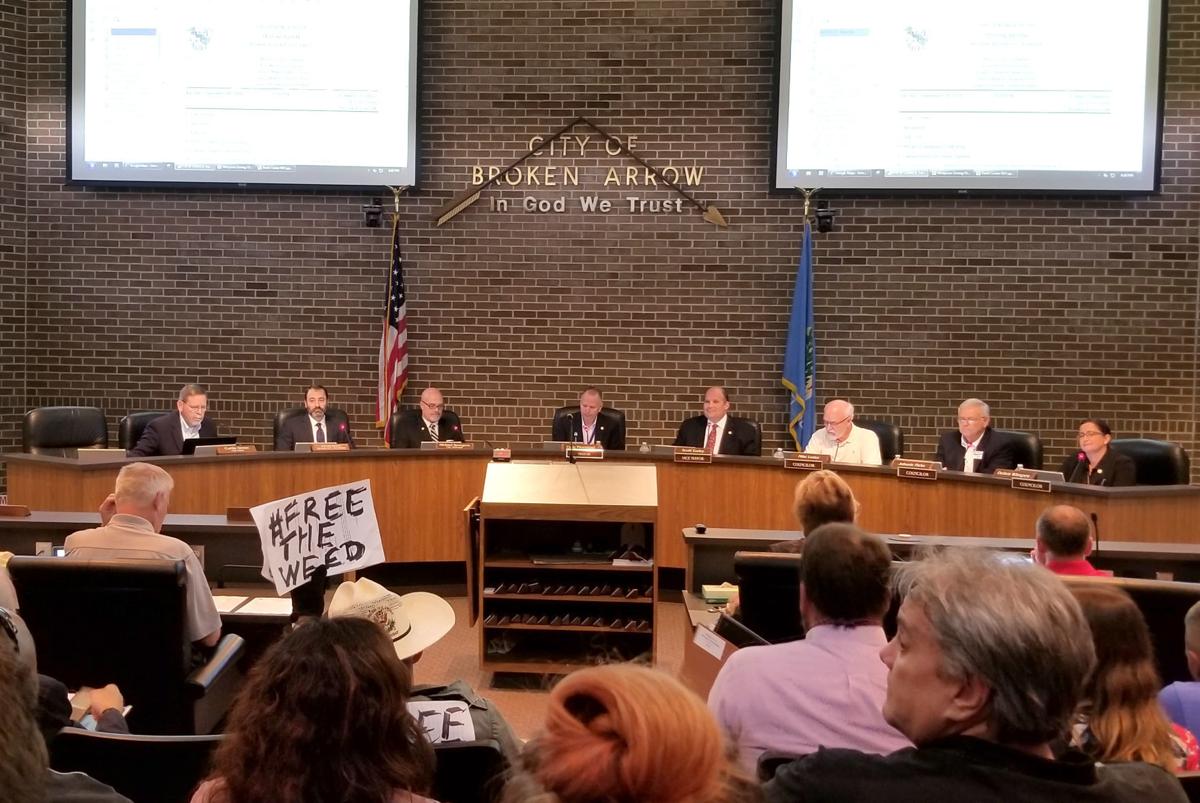 The Broken Arrow City Council meets to discuss its medical marijuana ordinance, which eventually was challenged by a lawsuit. SAMANTHA VICENT/Tulsa World 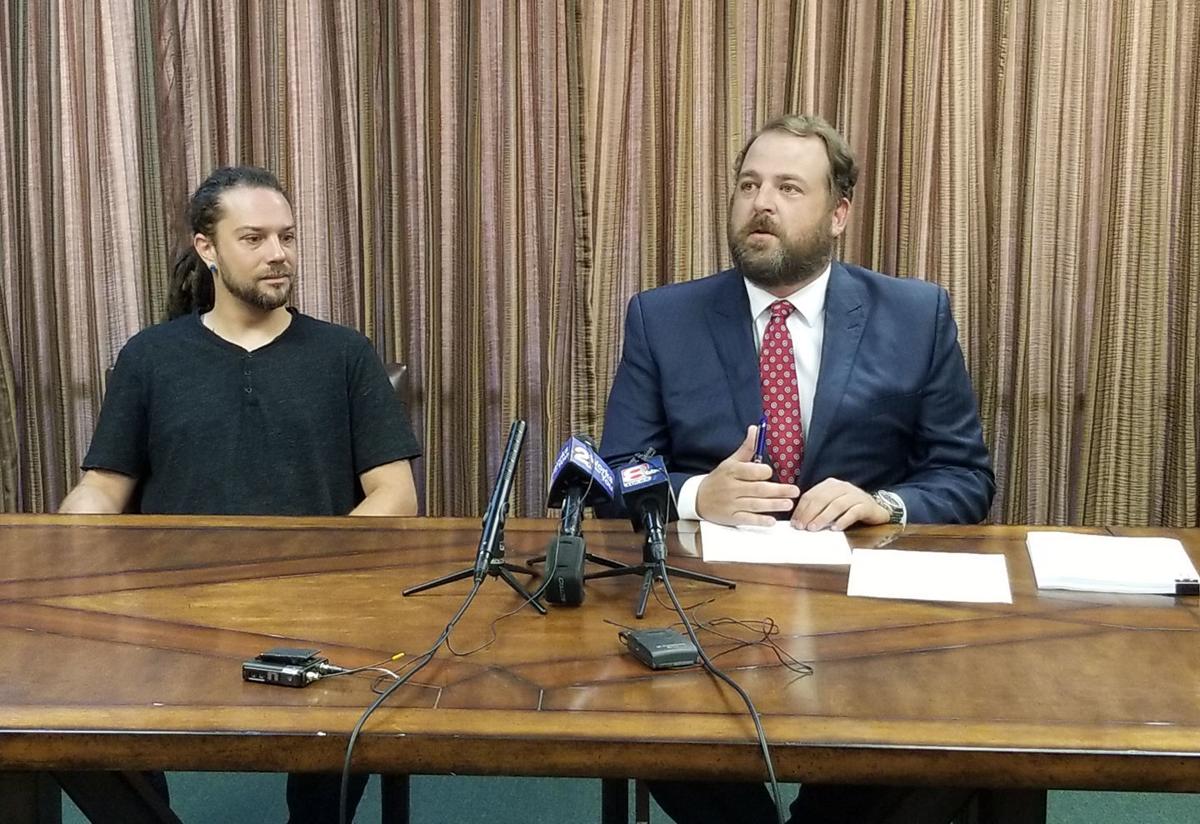 Austin Miller (left), the owner of Cloudi Mornings LLC, and attorney Ron Durbin filed a lawsuit against the city of Broken Arrow over its medical marijuana ordinances.

The Broken Arrow City Council meets to discuss its medical marijuana ordinance, which eventually was challenged by a lawsuit. SAMANTHA VICENT/Tulsa World

Austin Miller (left), the owner of Cloudi Mornings LLC, and attorney Ron Durbin filed a lawsuit against the city of Broken Arrow over its medical marijuana ordinances.

The city of Broken Arrow claimed victory Thursday in a lawsuit that challenged medical marijuana ordinances it approved last year, but the attorney who filed the petition argued the Oklahoma Supreme Court’s ruling does not vindicate the city.

Attorney Ron Durbin and grower Austin Miller, the owner of Cloudi Mornings LLC, went to Tulsa County District Court after the Broken Arrow City Council adopted ordinances that would have barred Miller from opening in the location he selected.

The city of Broken Arrow appealed to the Oklahoma Supreme Court, which dismissed the case on Tuesday after determining the Oklahoma Legislature’s passage of Senate Bill 1030 meant Miller’s arguments were “essentially nullified.” In a statement Thursday morning, the city of Broken Arrow said the city will now begin enforcing the ordinances it approved last year and called the decision “a win.”

“Here, without any indication that (the) city’s ordinances have exceeded what the Legislature authorized by (SQ 788) and its subsequent amendments, there is nothing to decide,” the Supreme Court said Tuesday.

Durbin said the ruling will apply retroactively, meaning existing growers and processors may have to move locations. He said Miller has since been able to find a backup location if needed and called the retroactive application an “utter and complete travesty.”

“On behalf of the city council, I want to commend city staff for putting together a sound and reasonable plan to comply with the new medical marijuana law,” Broken Arrow Mayor Craig Thurmond said. “It is unfortunate that tax dollars had to be spent to defend our actions in court; however, we’re pleased with the Oklahoma Supreme Court’s decision that allows municipalities to regulate marijuana businesses.”

SB 1030, whose primary author was Sen. Lonnie Paxton, R-Tuttle, granted municipalities the authority to create ordinances related to cannabis businesses. It says municipalities may follow their standard planning and zoning procedures for such businesses, but only gives licensed dispensaries statutory protection from restrictions that would prevent them from opening within municipal boundaries.

Durbin told the Tulsa World the court simply said his client’s challenge was moot due to the passage of SB 1030, which took legal effect Aug. 30. He said the decision therefore should not be interpreted as vindication for Broken Arrow, as it noted growers and processors do not have the same statutory protections from undue zoning restrictions as retail establishments.

The current Broken Arrow ordinance allows growers, as well as processors, to open in areas zoned industrial light or industrial heavy. It also requires cannabis to be grown and processed within the confines of a building.

Miller told the court in September 2018 that the zoning restrictions would subject him to financial harm because of the costs of finding an alternative location.

“The voters approved State Question 788 and the City of Broken Arrow responded with ordinances before the Oklahoma Legislature could expand and clarify the legislation,” the Supreme Court’s ruling states. “In the meantime, Cloudi Mornings sought and obtained a license to legally grow medical marijuana. It set up shop before the City of Broken Arrow could implement State Question 788, and when it tried to implement it, Cloudi Mornings attempted to thwart the city’s efforts with a declaratory judgment.”

Pickerill in October told the appellate court the Legislature did not include growers in the legal definition of “retail marijuana establishment” and pointed out multiple dispensaries are in operation in Broken Arrow. He said that meant the ordinances did not meet the threshold for designation as an undue restriction.

Durbin, however, said he believes the ordinance “goes too far” and he anticipates continuing to challenge how the city applies its rules to growers and processors.

“They’ve given me more ammunition to go fight them. If Broken Arrow thinks I am going away, they are sorely mistaken,” he said.