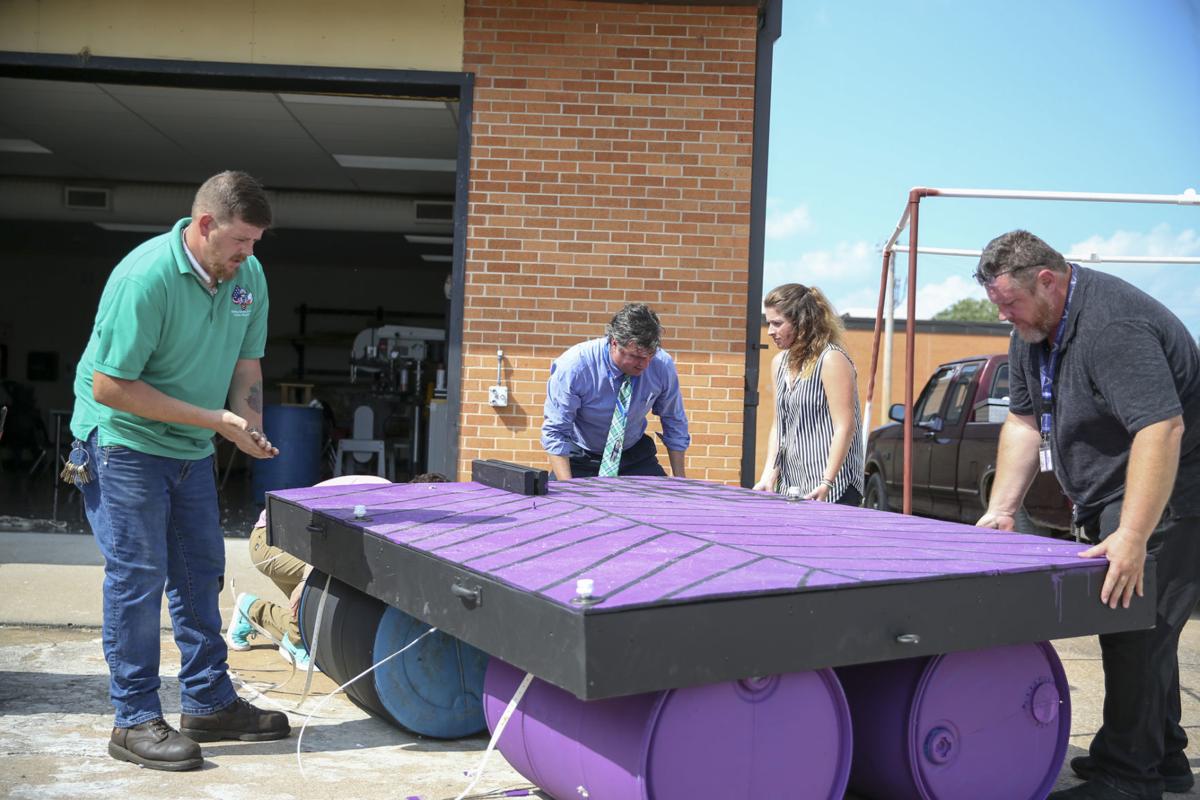 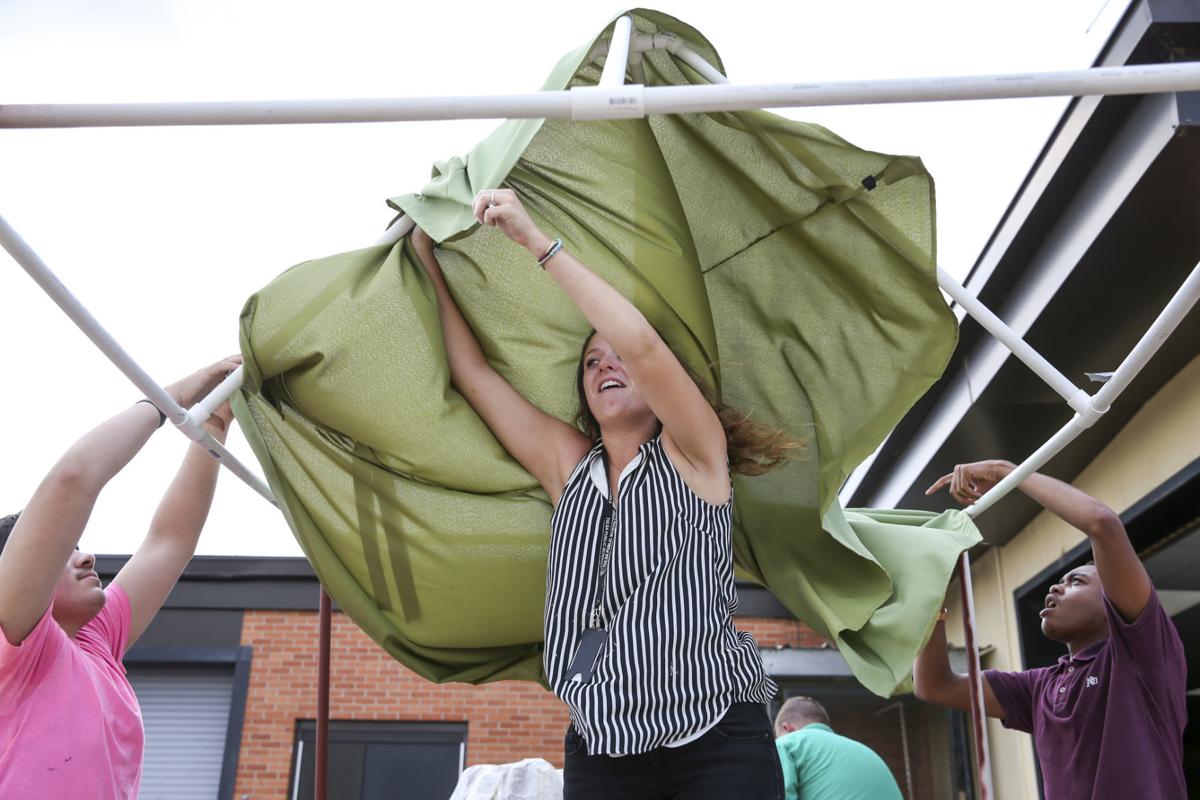 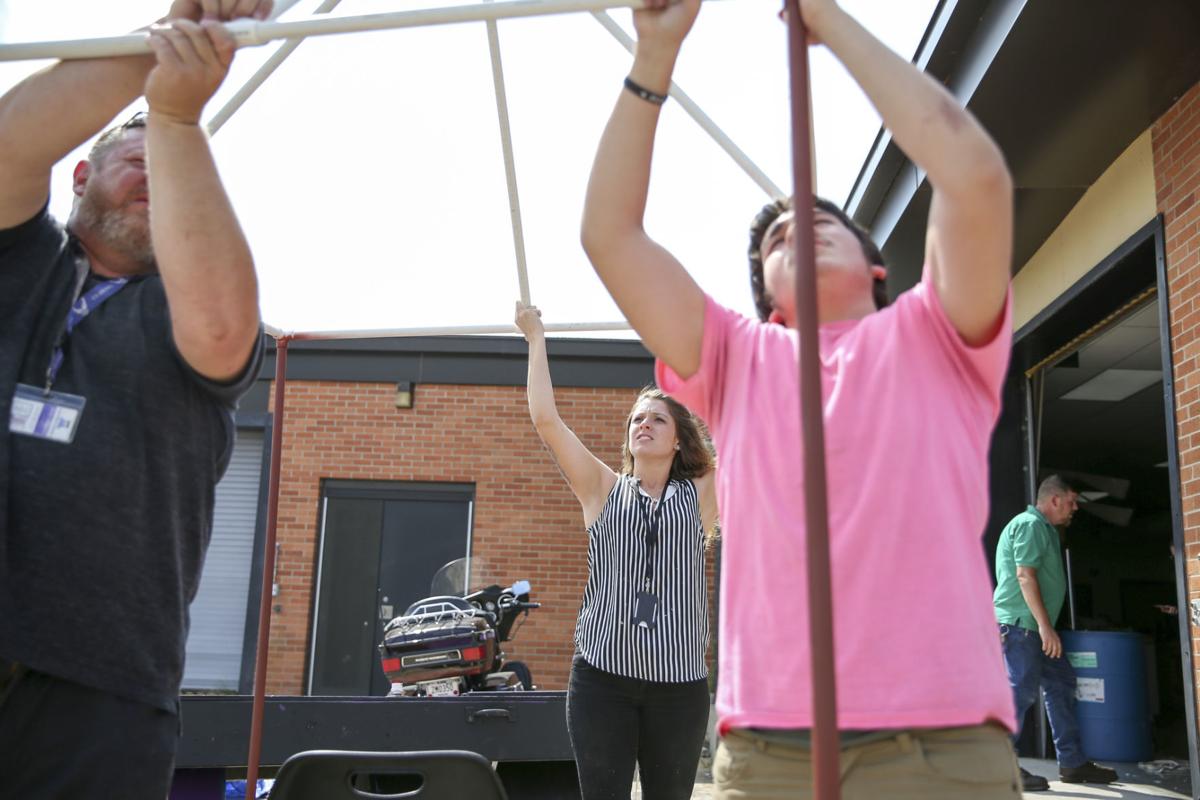 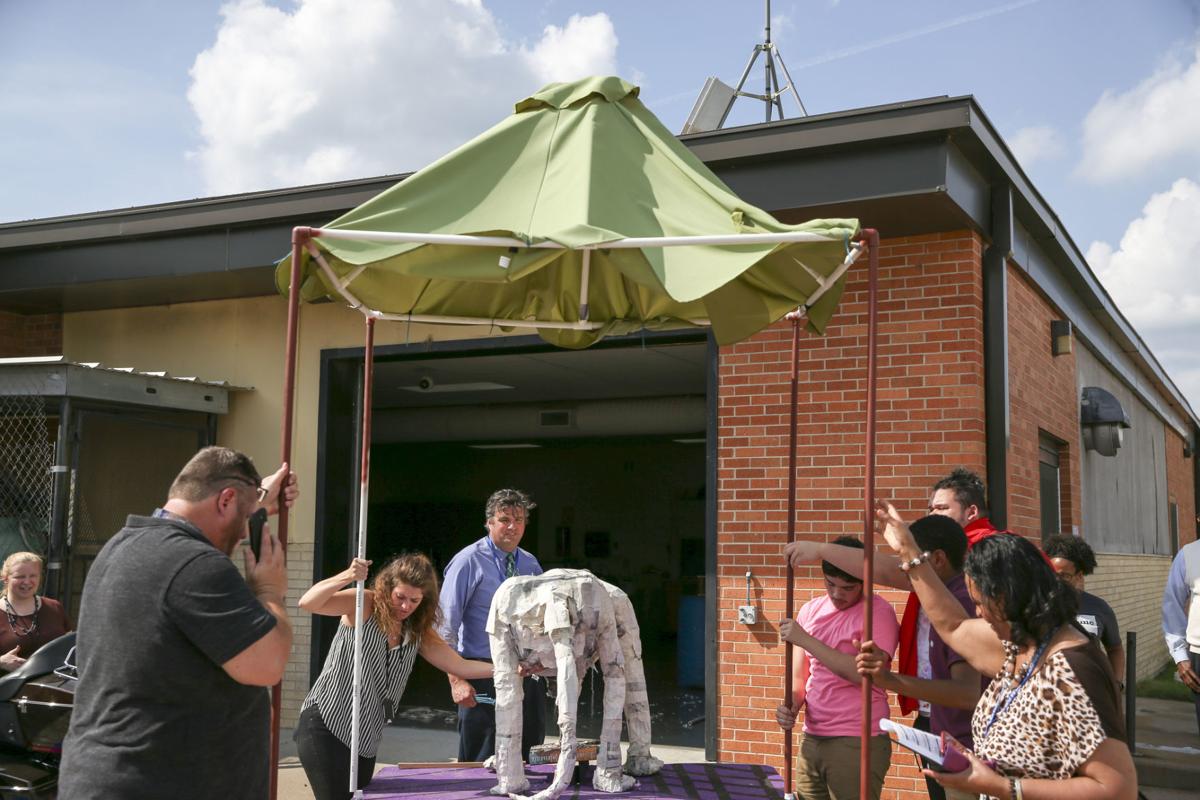 Students and staff steady a papier-mache panther and a canopy during raft construction at McLain High School on Thursday.

Students and staff steady a papier-mache panther and a canopy during raft construction at McLain High School on Thursday.

Of all the rafts hitting the Arkansas River for Tulsa’s Great Raft Race on Monday morning, McLain High School’s will be hard to miss.

With a purple-and-black striped hull, school banners and a papier-mache panther on the bow, the McLain raft is the product of only a few days of hard work by students, staff members and school partners.

“I actually started working on this Monday,” said Matthew Hamilton, a McLain sophomore and the raft’s captain. “This is just from Monday, and then we’ve had the art department working on the panther. ... We haven’t had that many team members to come and help, but the couple days where we did have a lot we got a lot more work done.”

McLain’s raft is part of the race’s STEM School Challenge, a division for school teams with awards for best engineered raft, best in show, most creative and the fastest down the river. Hamilton said he doubts McLain will be the fastest this year, though he hopes it will be something to build on for next Labor Day.

The paint job and panther derive from Marvel’s “Black Panther” as the raft’s theme, but McLain’s raft is about more than the blue ribbon.

Lawrence said the idea progressed through the summer and work began in earnest when school started. He said he’s impressed to see the students rally around the raft and accomplishing so much in so little time.

“One of the things we’re really stressing here at McLain is solidarity and unity among the students,” Lawrence said. “They have a lot of negativity in their lives, so when things like this happen, it helps create more friendships and a more positive environment.”

On Thursday afternoon, students and staff test-fitted the raft once class dismissed, although the panther still needs to be painted.

In the meantime, the raft received a custom-built anchor from Joe Meyer on behalf of the Ancient Order of Hibernians.

When the Ancient Order of Hibernians, an Irish Catholic fraternal organization, floated the race three years ago, Meyer said members wanted to find a way to help the next generation get involved. Meyer said it’s great to see the raft take shape.

“We loved it, and we will be entering,” Meyer said. “We’re glad to help, especially in the community. ...

“It really means a lot. They could be doing anything, and they’re doing something special like this together.”

It's almost time for Tulsa's Great Raft Race. Here's photos of the race since the mid-1970s.

The Finish Line Festival at River West Festival Park will end at 5 p.m.