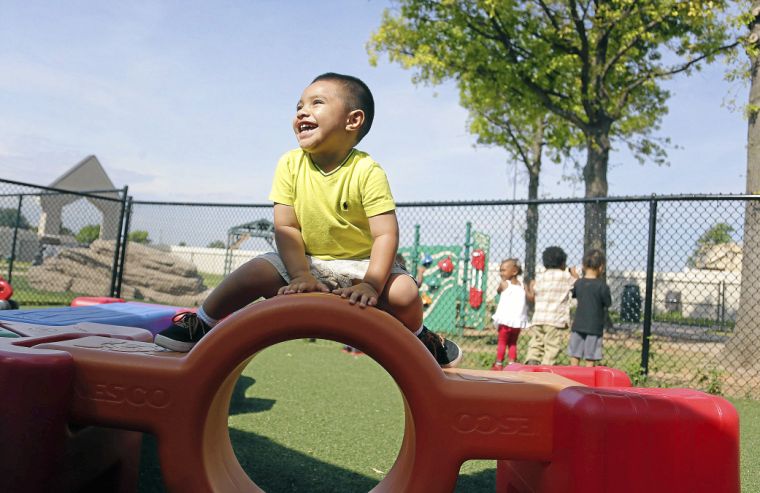 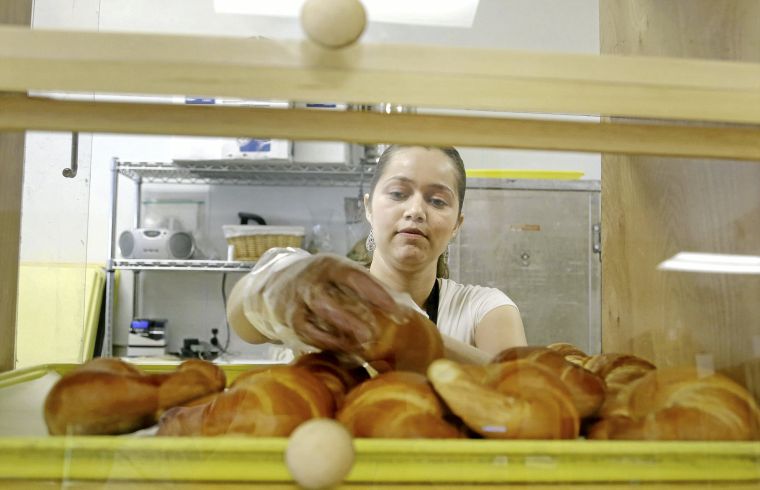 Roxana Padilla works at Pancho Anaya bakery near East 1st Street and South Lewis Avenue June 25, 2014. "We try to get better and study and learn the language, and we try to help the country too because we like here," she says. MIKE SIMONS/Tulsa World 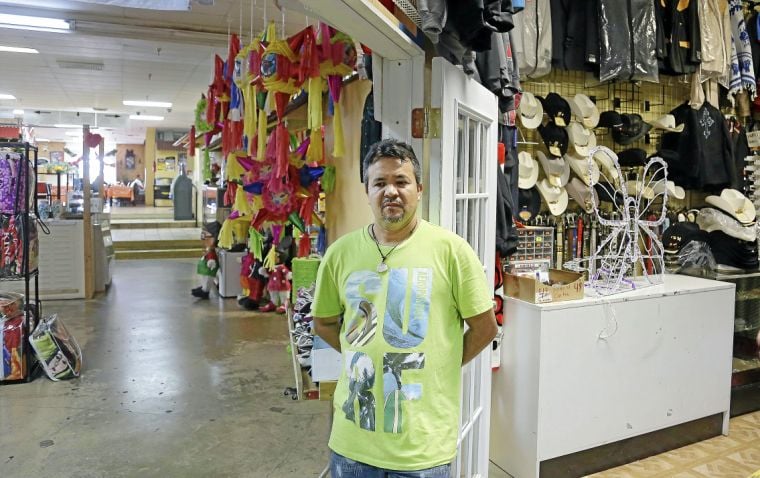 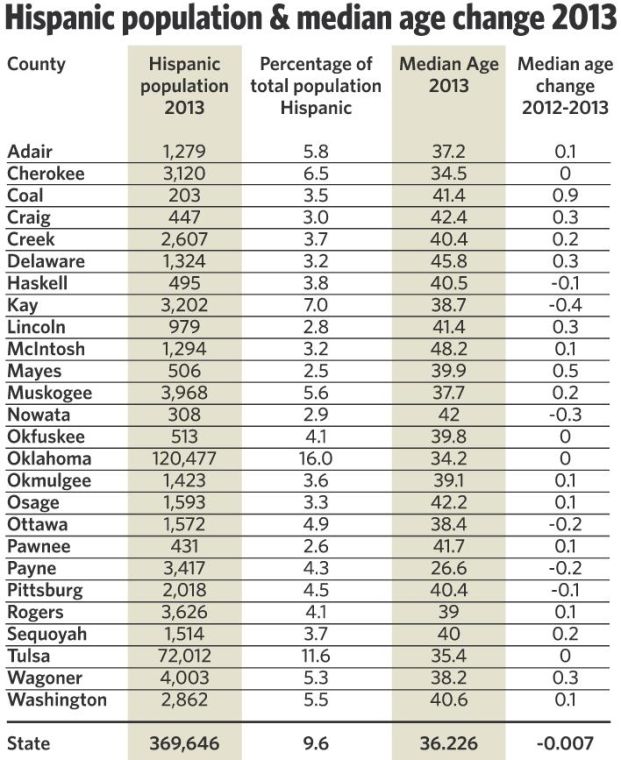 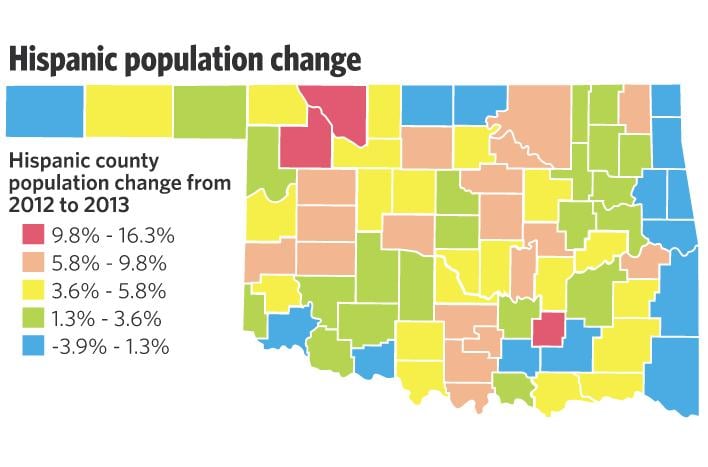 Roxana Padilla works at Pancho Anaya bakery near East 1st Street and South Lewis Avenue June 25, 2014. "We try to get better and study and learn the language, and we try to help the country too because we like here," she says. MIKE SIMONS/Tulsa World

Everything is a big hit at CAP Tulsa’s Eastgate location.

Wednesday morning the early childhood education center’s clientele was fired up about a special martial arts presentation, an obstacle course and a garbage truck making its rounds, visible from the shaded playground. It’s up for debate in the 2-year-old and under room whether that vehicle is actually a fire truck.

CAP Tulsa’s early childhood education program serves 2,300 children at 12 centers across the area. Around 40 percent of children enrolled are Hispanic, a proportion that has grown significantly in recent years, CAP spokeswoman Rainey Talbot said. Half of the 220 students at Eastgate, which serves the heavily Latino neighborhoods around 21st and Garnett, are Hispanic.

CAP created a bilingual and bicultural environment to better serve the shifting demographic. The anti-poverty agency incorporated dual language learning into children’s classrooms. Resources CAP offers adults, such as parenting classes and newsletters, are available in Spanish. CAP put an emphasis on hiring bilingual staff members, including a recruiter who has connections within the Hispanic community.

“We took a really holistic approach to it,” Talbot said.

U.S. Census Bureau population estimates data released Thursday indicate a Hispanic demographic shift is continuing in Tulsa County as well as other counties throughout the state.

The Hispanic population in Tulsa County increased by 2,119 residents to 72,012 as of July 1, 2013, according to Census Bureau population estimates. Hispanics make up 11.6 percent of the Tulsa County population.

Tulsa County ranks No. 16 in the state in percentage of population that is Hispanic.

Roxana Padilla came to Tulsa from central Mexico 10 years ago because family told her the city was safe, small and had job opportunities. When she arrived, Padilla said, there were not many Mexican- or Hispanic-owned businesses. Even finding good tortillas and Mexican food was difficult, and sometimes she would travel to Texas for proper ingredients.

All that began to change about six years ago, said Padilla, who works at Pancho Anaya Bakery with a green card. Tulsa’s Hispanic population began to increase, and more Hispanic businesses began to open and thrive.

“It’s really difficult to be in Mexico and have a real good life; that’s why we come here,” Padilla said. “It’s nothing bad; we’re not doing anything bad here. We try to get better and study and learn the language.

“And we try to help the country, too, because we like it here, too.”

Manuel Villalobos moved to Tulsa from Southern California 16 years ago because the cost of living is so much cheaper here, he said.

The Hispanic population in Tulsa seemed to drop about four years ago, Villalobos said, but recently the population has increased back to a higher level.

White non-Hispanics continue to be the racial majority in Tulsa County, making up 64 percent of the population.

Texas County in the Oklahoma Panhandle had the highest percentage of Hispanic population in 2013 at 45.7 percent.

Texas County is one of three so-called majority-minority counties in the state where minorities make up a majority of the population.

Large percentages of American Indians account for the majority-minority statuses of Adair and Cherokee counties, where the percentage of white non-Hispanics is 42 and 49.6 percent of the total population respectively.

Other census data made public Thursday show that while the median age in the state of Oklahoma population declined slightly to 36.226 years, it varies widely among individual counties.

The Tulsa County population, with a median age of 35.4 years, is the 12th youngest county in the state.

Oklahoma is one of seven states where the median age declined between 2012 and 2013, according to U.S. Census Bureau estimates.

Census Bureau officials attributed the decline in median age among Oklahoma and others in the Great Plains to the energy boom in those areas.

The nation as a whole grew older as the oldest baby boomers became seniors. The nation’s 65-and-older population surged to 44.7 million in 2013, up 3.6 percent from 2012, according to the Census Bureau. Population younger than 65 grew by only 0.3 percent.

Other states that saw a decline in the median age of the population included North Dakota, Montana, Wyoming, South Dakota, Alaska and Hawaii.

The Hispanic population in Tulsa County increased by 2,119 residents to 72,012 as of July 1, 2013, according to Census Bureau population estim…