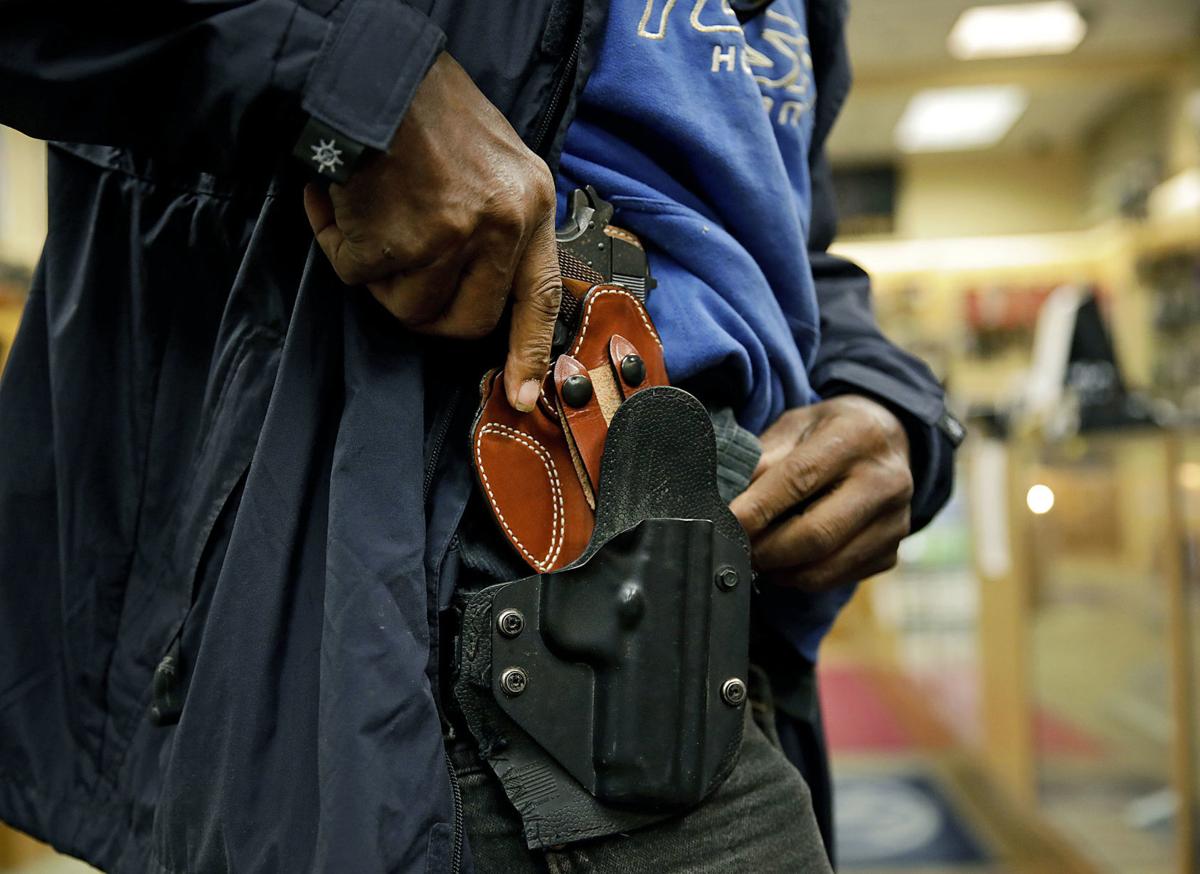 A customer at 2A Shooting Center in Tulsa shops for a holster on Friday, Oct. 18. MIKE SIMONS/Tulsa World 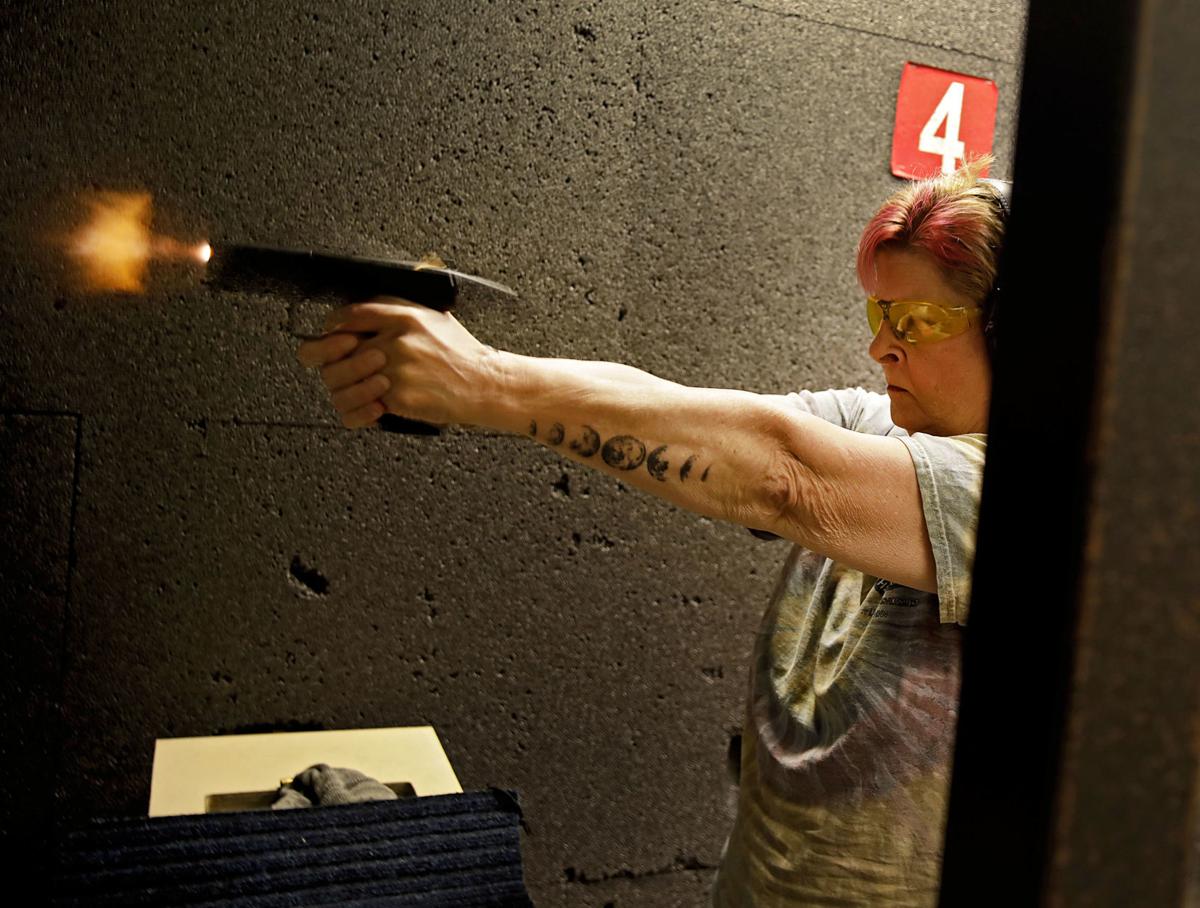 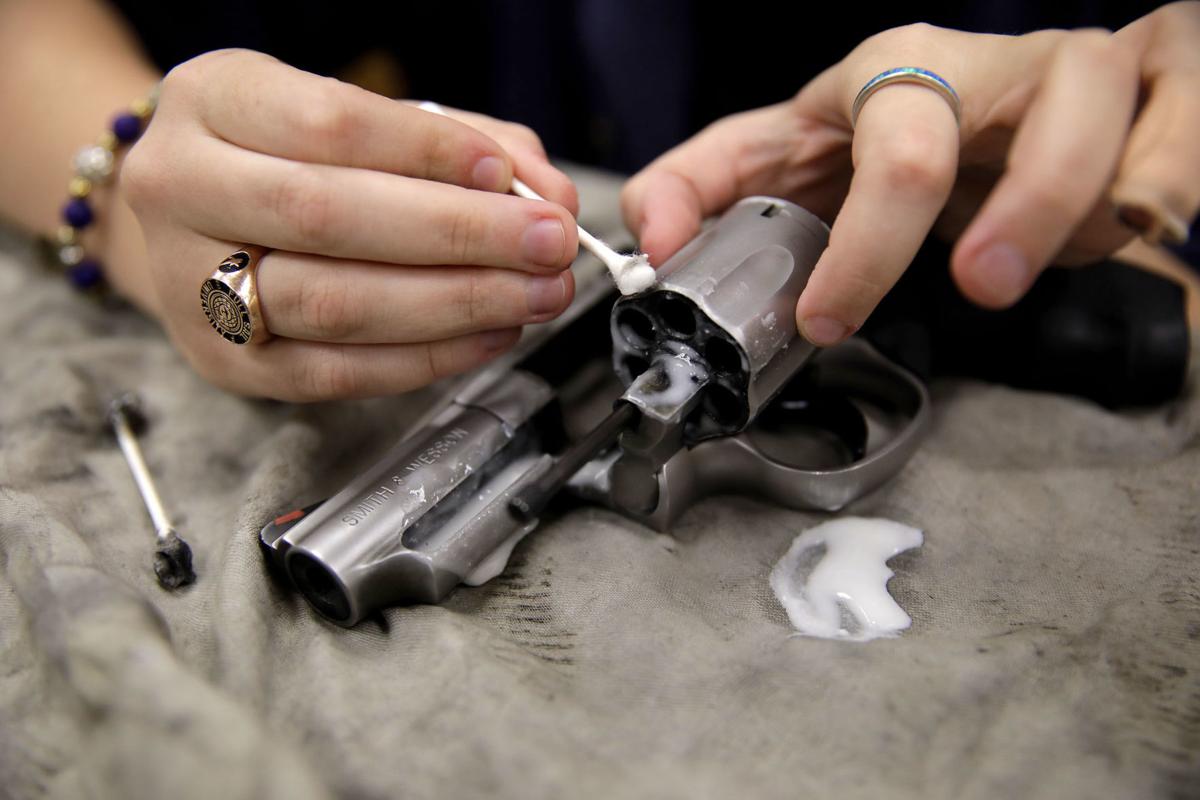 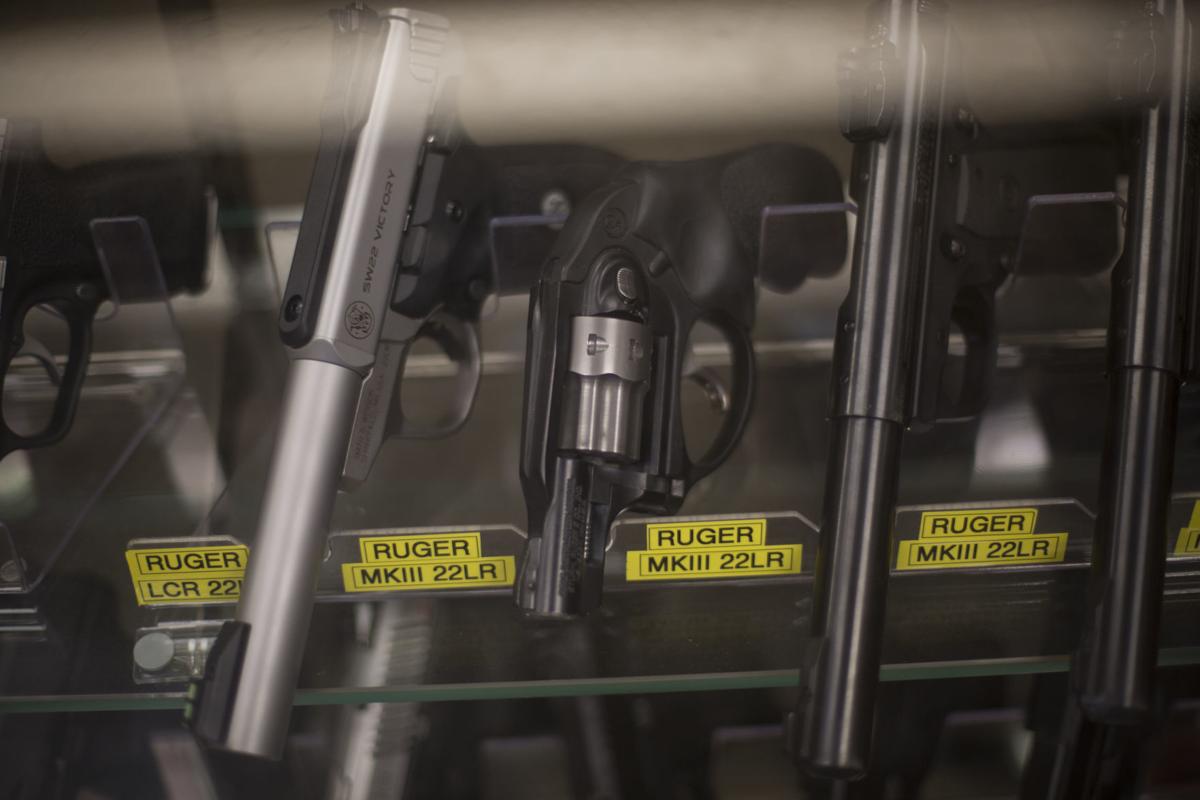 Handguns on display in a case at 2A Shooting Center in Tulsa in 2016. Tulsa World File 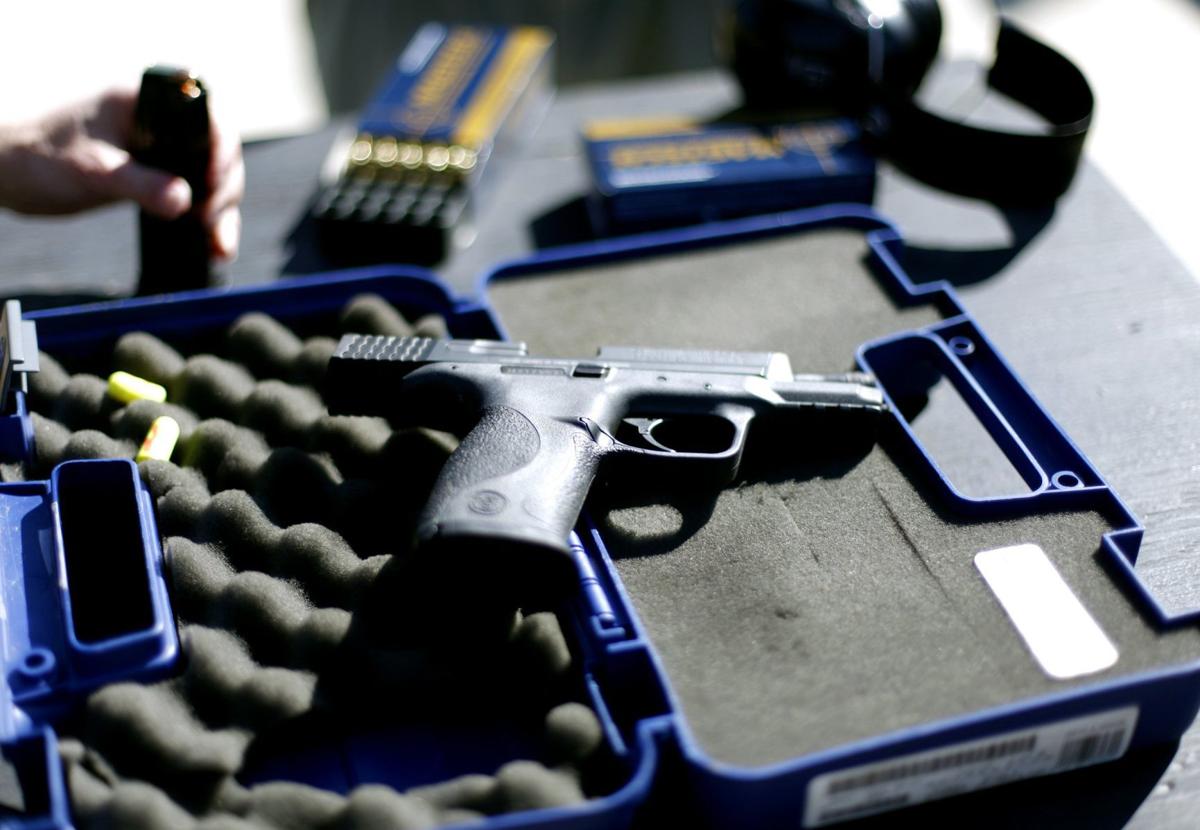 In this file photograph, a student in an introduction to marksmanship class prepares to load her weapon at US Shooting Academy in 2012. JOHN CLANTON/Tulsa World 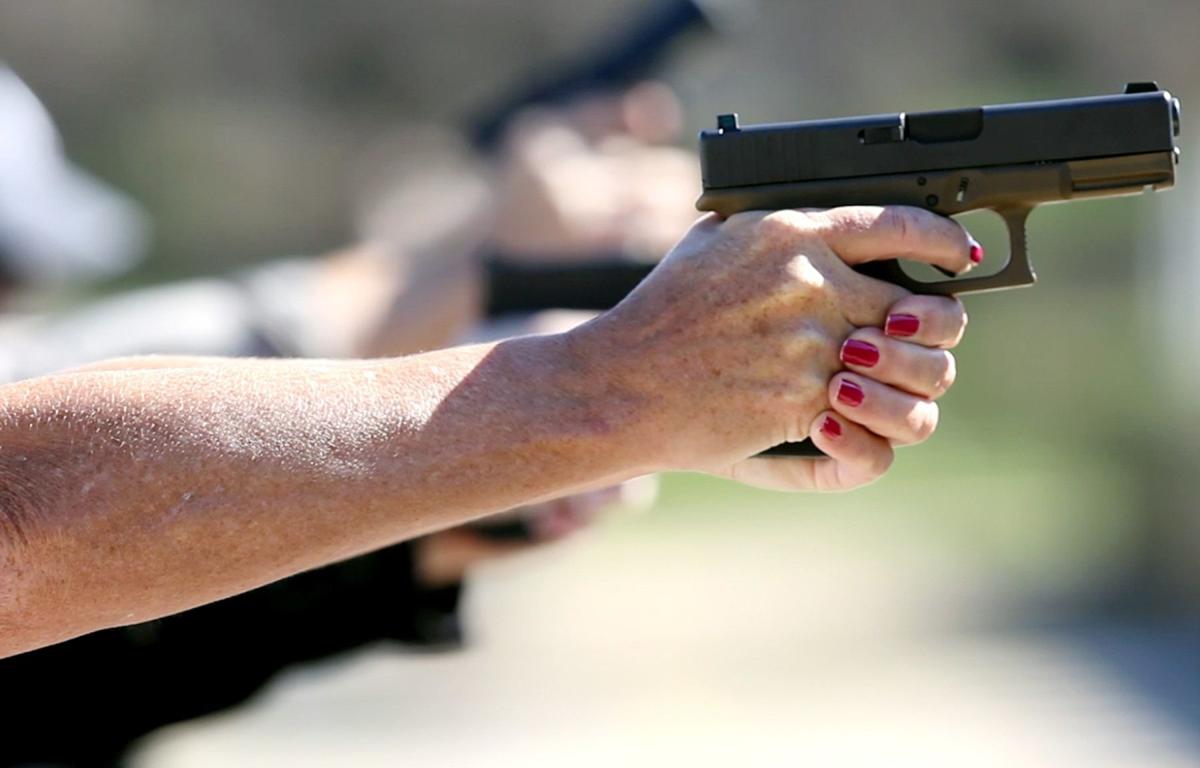 In this file photograph, students in an introduction to marksmanship class shoot at targets at a local range in 2012. JOHN CLANTON/Tulsa World

A customer at 2A Shooting Center in Tulsa shops for a holster on Friday, Oct. 18. MIKE SIMONS/Tulsa World

Handguns on display in a case at 2A Shooting Center in Tulsa in 2016. Tulsa World File

In this file photograph, a student in an introduction to marksmanship class prepares to load her weapon at US Shooting Academy in 2012. JOHN CLANTON/Tulsa World

In this file photograph, students in an introduction to marksmanship class shoot at targets at a local range in 2012. JOHN CLANTON/Tulsa World

Correction: This story has been updated to correct the statement regarding the law against carrying guns into places where alcoholic beverages are consumed as a primary purpose of a business.

With Oklahomans set to take up weapons without the need for a license or training starting Friday, demand for concealed-carry classes at one of Tulsa’s busiest firearms instruction sites is markedly less.

“We’ve dropped from six classes a month to two,” said Robert Jerome, an instructor at 2A Shooting Center for nearly a decade, as well as a law enforcement professional who has trained police officers for more than 25 years.

While the state’s concealed and open carry status now will be listed as “unrestricted” or “shall issue” — often called permitless carry or constitutional carry — state and federal laws still very much come into play, he said.

“I don’t have a problem at all with constitutional carry, but here is what I have always said is the biggest problem with it: Just because people have the right to carry a gun, that doesn’t relieve them of the responsibility of carrying a gun,” Jerome said.

Jerome said 2A will continue to offer its standard concealed-carry class because people still will need licenses if they want to cross state lines, but they are going to offer a new constitutional-carry class, as well.

The newer class will focus more on important aspects of the law with students running through more potential conflict scenarios because less time is required to cover the now-optional permitting process, he said.

“The law doesn’t go away, and people need to know what the law is,” he said. “We don’t want people to end up with misdemeanors or a felony because they just don’t know the law. ... Also, you also need to know how to protect yourself in that moment in case something happens so things work out all right — in your life, and in the courtroom.”

The Tulsa World asked the longtime instructor about some of the questions most often asked by concealed-carry students, what people need to know who are thinking about carrying a firearm, and what are some important do’s and don’ts.

What exactly is the firearms law?

The first thing shooters need to know is the firearms law — laws, actually — addressed under Oklahoma Statute Title 21, section 1289.25 of the state penal code, which is the legal framework for the Oklahoma Firearms Act of 1971, the 2018 Oklahoma Self-Defense Act and the basis for Oklahoma’s Castle Doctrine and Stand-Your-Ground Doctrine. It’s a good idea to study all these aspects of the law but (hint) it’s a lot easier to interpret with the help of a professional firearms instructor.

DO: Seek training and keep up with changes in the law if you plan to carry.

A few things, but the biggest is that a license to carry now is optional. Among the other provisions, the main change under House Bill 2597 is that the Self-Defense Act no longer requires Oklahomans who are 21 years old, or veterans or military who are 18 and over, to obtain a permit at a cost of $100 for five years or $200 for 10, plus miscellaneous costs for a required training certificate through instruction that showed basic knowledge of the Oklahoma Self-Defense Act and an ability to handle a firearm safely, proof of residency or permanent military orders to be in the state, a background check and fingerprinting.

If you are a legal resident over 21, or military or a veteran, and don’t face legal restrictions that prevent you from possessing a gun, you have the right to carry.

DO: Remember you still need a concealed-carry license to travel across some state lines so you might just want to get, or keep renewing, that license.

DON’T: Assume that permitless means without rules. Many laws still apply to when, how and where a firearm can be carried, and how it might be used.

Where can’t I carry?

Basically, there are six types of places you can’t carry a firearm. Also be aware there are places where it is OK to carry concealed, but not open, and situations where it is OK to carry or transport a loaded handgun but not loaded rifle or shotgun. Another bill, House Bill 2010, also signed by Gov. Kevin Stitt and effective Nov. 1, allows facilities under a public trust, such as Gathering Place and the Tulsa and Oklahoma City zoos, to prohibit open carry; however, people now will be allowed carry concealed at those venues.

No firearms are allowed in bars or other places where alcoholic beverages are consumed as a primary purpose of the business; government offices and buildings; prisons or detention centers; gambling places and professional sports arenas (unless allowed by the owner); public schools, colleges and universities (but the law allows for private and public schools to designate specific staff who may carry on school property); and any other place prohibited by law enforcement (such as established for visiting dignitaries or to control a natural-disaster area).

Private properties also can be off-limits as the law allows “any person, property owner, tenant, employer, place of worship or business entity” to control the possession of firearms on their property.

DO: Always keep in mind where you will be going and whether your firearm needs to be secured or stowed away before you get there. In almost all situations, a firearm is legal if it is stowed out-of-sight in a locked vehicle in a parking area with the windows rolled up.

DON’T: Push it. If you ever are in doubt about the allowance of firearms in a place you plan to visit, err on the side of caution.

What if I’m contacted by a police officer and I have a gun?

After Nov. 1, an individual is no longer required to inform a law enforcement officer that they are carrying a firearm, but Jerome advises that it’s a wise practice to advise an officer upfront anyway.

DO: Keep your hands visible and inform the police officer “I am exercising my constitutional right to carry” and tell them where the weapon is located. If you are pulled over while driving, put your hands on the steering wheel, turn on a dome light if it is at night, and inform the officer in the same way. Informing them up-front can help develop a rapport, Jerome said.

DON’T: Make sudden moves or reach for the gun to show it to the officer. Just keep your hands visible, or on the steering wheel, and tell the officer where it is located.

Some states practice reciprocity and honor Oklahoma’s less-restrictive laws, but others do not. Kansas, Arkansas and Missouri also are constitutional-carry and reciprocity states, but Texas, New Mexico and Colorado are not. Fourteen states nationwide are now permitless-carry states, but three of those allow the practice for residents only.

Can I have my gun with me when I take my kids to school?

It is illegal to take guns into schools, but guns may be on the premises as long as they are secured inside your vehicle, windows up, doors locked and stored out-of-sight.

Now that I can carry legally without a permit, can I just put my handgun in my waistband or belt or toss it on the seat of my car?

Safetywise, none of those are good ideas, but technically it is allowed if it is done in a way that the handgun is fully concealed or in a holster. Open-carry rules demand a gun be secured in a holster if it is visible, and that includes inside a vehicle. If it is concealed in a way no reasonable person could see it or know it is present, it can be loose.

DO: Always carry a loaded handgun in a holster, no matter what the law states. Make sure the trigger guard of that firearm is covered. That is a basic gun safety rule.

DON’T: Forget the first rule in handling a loaded firearm is to not point it at anything you don’t want to shoot, and that includes parts of your own body.

Can I have just a couple of beers while carrying?

No. It is unlawful to carry inside a business that primarily benefits from the consumption of alcohol, and it is against the law for any person “to carry or use shotguns, rifles or pistols in any circumstances while under the influence of beer, intoxicating liquors or any hallucinogenic, or any unlawful or un-prescribed drug,” as well as some prescribed medicines with certain side effects, according to the Self-Defense Act.

Can I tell someone to leave me alone because I have a gun?

First, do all you can to get away from any conflict. As Jerome put it, “Only turn to your gun if you’re in fear for your life or being put in the hospital.” The moment that you make reference to, display or pull your gun you have threatened or exercised deadly force and legal ramifications become much more complicated.

Not necessarily, it can also make you a target, and if done carelessly can introduce a dangerous element to a situation. Law enforcement officers use specially designed holsters and are trained in ways to protect and retain their own firearm. Jerome recommends open carry only to people with extensive training.

Rep. Jason Lowe, D-Oklahoma City, is among plaintiffs in a lawsuit filed in Oklahoma County District Court seeking to put the permitless-carry law on hold. He says it violates the constitutional requirement that pieces of legislation address one subject.

A hearing in that case, in which an injunction is being sought, is scheduled for Oct. 29.