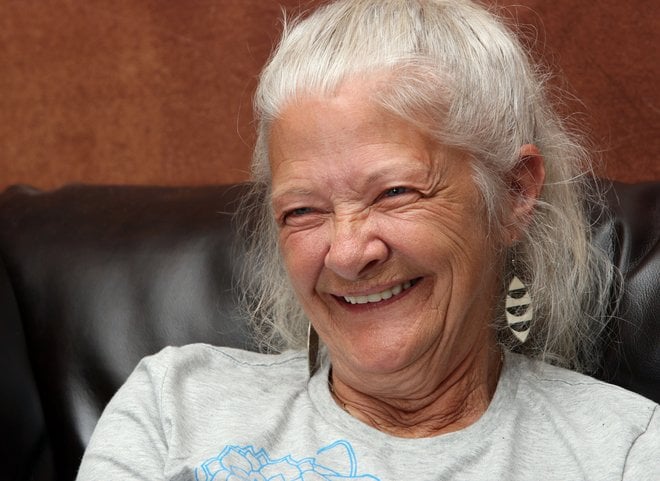 Betty Wolfe smiles during an interview in May, shortly after she was released from prison. CORY YOUNG / Tulsa World

Betty Wolfe smiles during an interview in May, shortly after she was released from prison. CORY YOUNG / Tulsa World

One inmate has been released from prison and a life sentence was thrown out for another as part of a police corruption probe of the Tulsa Police Department, records show.

Officials continue to review criminal cases involving eight police officers whose names have surfaced in a federal investigation that became public in November 2009.

In total, criminal cases were modified recently for five people as a result of the federal probe, court records show. Since July 2009, state and federal court officials have freed or modified the cases for 38 people, a World investigation shows.

District attorney Tim Harris has said the acquittals should not affect any cases his office has reviewed.

Thus far, Gray, Wells and Brandon McFadden - a former agent with the U.S. Bureau of Alcohol, Tobacco and Firearms - have been convicted or pleaded guilty in the federal case. All three await sentencing.

DeBruin and Bonham were acquitted June 10 on all charges against them, which included planting drugs on individuals and stealing U.S. funds during an FBI sting in May 2009.

Kaiser and Hill have admitted stealing drug money and planting "replacement drugs" on individuals and have prosecutorial immunity while they cooperate with prosecutors.

The trial for Yelton and Henderson begins Aug. 1 in U.S. District Court.

Kellough determined that DeBruin deprived Murphy of his civil rights during a drug bust in 2009, court records show. In Murphy's case, DeBruin failed to return a search warrant and its findings as outlined by state statute, Kellough said in his ruling.

Additional questions about DeBruin's search warrant arose when an alleged informant signed an affidavit stating he was not an informant and that he never talked to DeBruin about Murphy's alleged marijuana deals, court records show.

The alleged informant was Shiron Davis, 25, who was freed from prison in November due to DeBruin's indictment on police corruption charges, the World has reported.

In Murphy's case, Kellough wrote: "Material omission in the Affidavit for Search Warrant misled the approving magistrate-judge who issued the warrant thus depriving Defendant of due process of law."

DeBruin's attorney Shannon McMurray said: "I believe Shiron Davis is a perjurer. There are phone recording from (Tulsa) jail of Shiron mentioning 'Bren' and referring to getting (Bren's) phone number so he can be bailed out of jail."

Murphy was charged Nov. 3, 2009, with possession of drugs with intent to distribute, court records show.

While Southerland raised the question of DeBruin's truthfulness in court filings, he does not see DeBruin's behavior rising to the level of police corruption that has been alleged by Duke's office.

"The judge was not willing to say that Officer DeBruin lied in the affidavit but he did find omissions, which had they been provided to the defendant, his lawyer could have argued for suppression of evidence and probably prevailed," Southerland said.

Murphy pleaded guilty Jan. 27, 2010, to the drug charge involving DeBruin, records show. Murphy had a felony conviction in 2006 involving second-degree manslaughter so the court revoked his probation and sentenced him to six years in prison on the drug conviction, records show.

In a separate case, Darius Darrell Payne, 42, prevailed in having a life sentence thrown out. The case involved a 2009 conviction for drug possession with intent to distribute, Tulsa District Court records show.

Payne remains in prison because he is still serving life without parole in a separate drug conviction. The thrown-out sentence involved Bonham, Kaiser and Hill, court records show.

Like DeBruin, Bonham was acquitted on charges of planting drugs on individuals and stealing money during the FBI sting at a local motel.

Wells was convicted on five of 10 counts that include stealing U.S. funds and drug conspiracy.

Other felony charges that have been dismissed due to the police corruption probe involve Jason E. Henson, Emmitt R. Weaver and Danny W. Bilby, records show.

Henson was charged Aug. 14, 2009, with endeavoring to manufacture a controlled drug.

Weaver was charged July 27, 2009, with possession of a controlled drug.

These 38 people have been freed from prison, had felony charges dropped, had prison sentences reduced or been granted a new trial as a result of the grand jury probe. Here are details on each case.

(Listed in order of release.)

ALPHIE PHILLIP McKINNEY: Pleaded guilty to possession of a firearm and was sentenced Oct. 9, 2008, to 48 months in federal prison. Released in April 2010.

BOBBY HALEY SR.: Convicted Sept. 30, 2005, of drug and conspiracy charges and sentenced Jan. 4, 2006, to 22 years in prison. Released from federal prison in May 2010. Filed a federal lawsuit June 3 against the city of Tulsa and the Tulsa Police Department.

HUGO ALBERTO GUTIERREZ: Pleaded guilty to possession of methamphetamine with intent to distribute and was sentenced July 28, 2008, to eight years and one month in federal prison. Released from federal prison July 30, 2010.

DUSTIN ROBERT EASTOM: Convicted Nov. 16, 2007, and sentenced to seven years in prison in February 2008. Found guilty of possession of methamphetamine with intent to distribute and possession of a firearm. Conviction set aside Sept. 3 and freed from federal prison Sept. 7, 2010.

JOSE ANGEL GONZALEZ: Pleaded guilty in November 2008 to possessing a sawed-off shotgun but was never sentenced in the case. The charge was dismissed Sept. 30, although Gonzalez still faces a federal drug case. He remains free on bond.

DEMARIO T. HARRIS: Convicted April 20, 2005, of possession of cocaine with intent to distribute and felon in possession of a firearm; sentenced to life plus 10 years to run concurrently. The conviction was vacated Oct. 27, and he was freed from prison Oct. 28.

MELVIN L. BAILEY JR.: Convicted June 27, 2008, on two counts of possession of cocaine with intent to distribute and one count of maintaining a drug-involved premises, records show. Sentenced to 30 years in prison. On Sept. 22, Bailey pleaded guilty to one count of using a telephone for a drug transaction and was given a new release date of July 31, 2011. His previous release date was in 2034, records show.

IVAN A. SILVA-ARZETA: Convicted June 1, 2007, of possessing methamphetamine with intent to distribute, possession of firearm by an illegal alien and during a drug crime. Also pleaded guilty to use of false Social Security number, use of false identification and possessing a counterfeit registration card. Sentenced to 11 years in prison. Was in custody from May 31, 2006, until released Dec. 10. Drugs and weapons charges vacated Dec. 1. Resentenced on remaining counts and released on time served.

CLEO D. HILL: Charged Sept. 8 in federal court with being a felon in possession of a firearm during drug trafficking and possession of marijuana with intent to distribute. Case dismissed Dec. 9. Hill is expected to be a federal witness in the criminal case against a Tulsa police officer.

ANTONIO J. ARMSTRONG: Convicted April 28, 2005, of possession of crack cocaine with intent to distribute and possession of a firearm by a felon. He was sentenced to federal prison Aug. 19, 2005. Sentenced to concurrent sentences of 12 years for the drug conviction and 10 years for the weapon’s charge. Drug conviction thrown out May 13, 2011. Seeking to have his weapons sentence reduced. Remains in prison on the weapons conviction.

PATRICK N. LONDON: Charged Jan. 20, 2009, with trafficking in illegal drugs and spent 435 days in jail before a district judge dismissed London’s case in March 2010 because a Tulsa Police officer connected to the grand jury investigation allegedly lied about the facts of probable cause in London’s arrest. London recently filed a tort-claim notice, which means he is expected to file a lawsuit against the city. London’s claim letter to the city says he is seeking $13 million.

BRANDON G. SCOTT: Charged Aug. 12, 2009, with drug possession with intent to distribute. Charge dismissed Sept. 1, 2010. Scott is named in the federal indictment against Officer Jeff Henderson as someone whose civil rights allegedly were violated by Henderson.

SHIRON D. DAVIS: Convicted May 5,2010, of possession of a controlled drug with intent to distribute. Sentenced to eight years in prison. Sentence reduced Nov. 16, 2010, to one year in prison and four years of probation. Released from prison. Sentence and conviction vacated Jan. 27, 2011.

RUBEN FLORES-OLMOS: Charged Jan. 25, 2007, with possession of a controlled drug with intent to distribute. Pleaded no contest March 6, 2007, and received a six-year suspended sentence. Conviction vacated Dec. 27, 2010. Flores-Olmos is an illegal immigrant who is expected to be deported.

DARIUS D. PAYNE: Convicted of possession of drugs with intent to distribute April 2009 and sentenced to life in prison. His life sentence was thrown out May 5, 2011. Payne remains in prison because he is still serving life without parole in a separate drug conviction in 2010.

BREN M. MURPHY: Charged Nov. 3, 2009, with possession of drugs with intent to distribute and pleaded guilty Jan. 27, 2010. His probation on a second-degree manslaughter conviction from 2006 was revoked and he was sentenced to prison for 6 years on the drug conviction. Freed from prison May 11, 2011.

EDWARD D. WHITE: Pleaded no contest June 11, 2010, to possession of a controlled drug in two separate cases and sentenced to four years in prison. Conviction vacated Jan. 27, 2011, and new trial ordered. Case dismissed May 6, 2011, and White was ordered to be freed.

BETTY WOLFE: Entered a blind plea and was convicted of felony drug possession with intent to distribute. Received a 12-year prison sentence May 8, 2008. Wolfe was released from prison May 17, 2011.