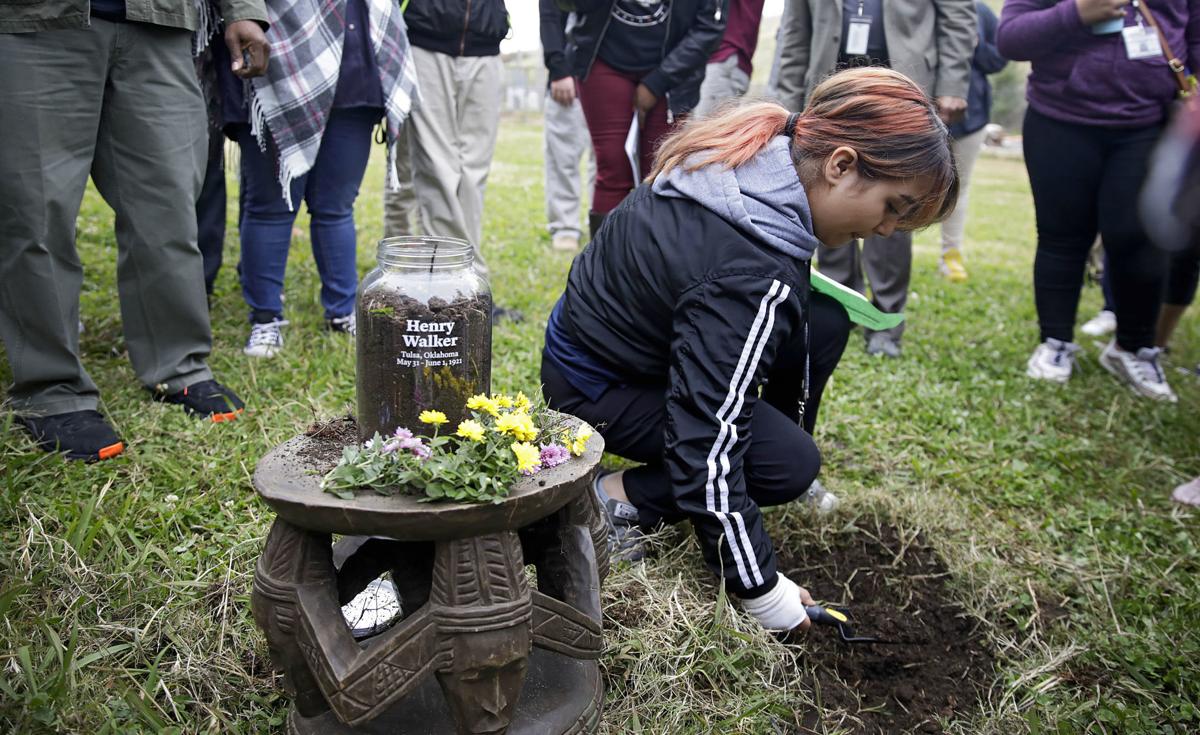 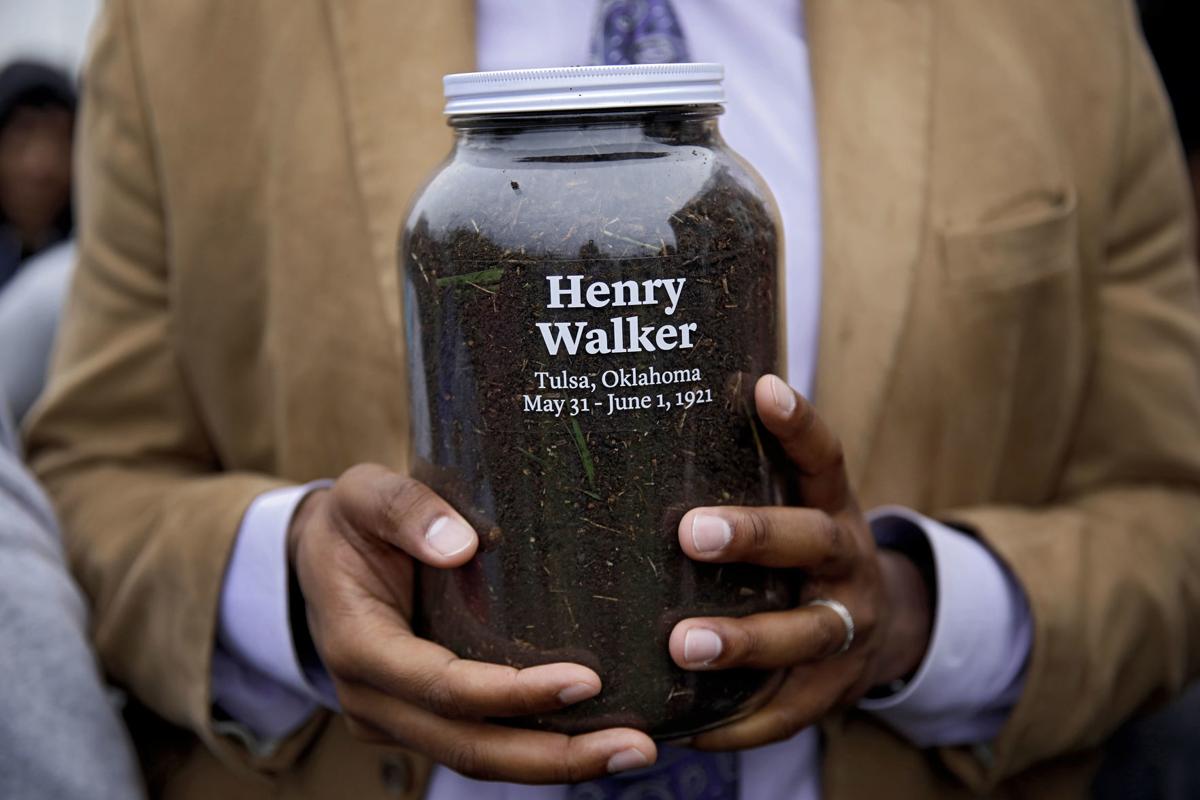 The Rev. Robert Turner holds a jar of soil collected by students on Wednesday. Henry Walker was a victim of the 1921 Tulsa Race Massacre. MIKE SIMONS/Tulsa World 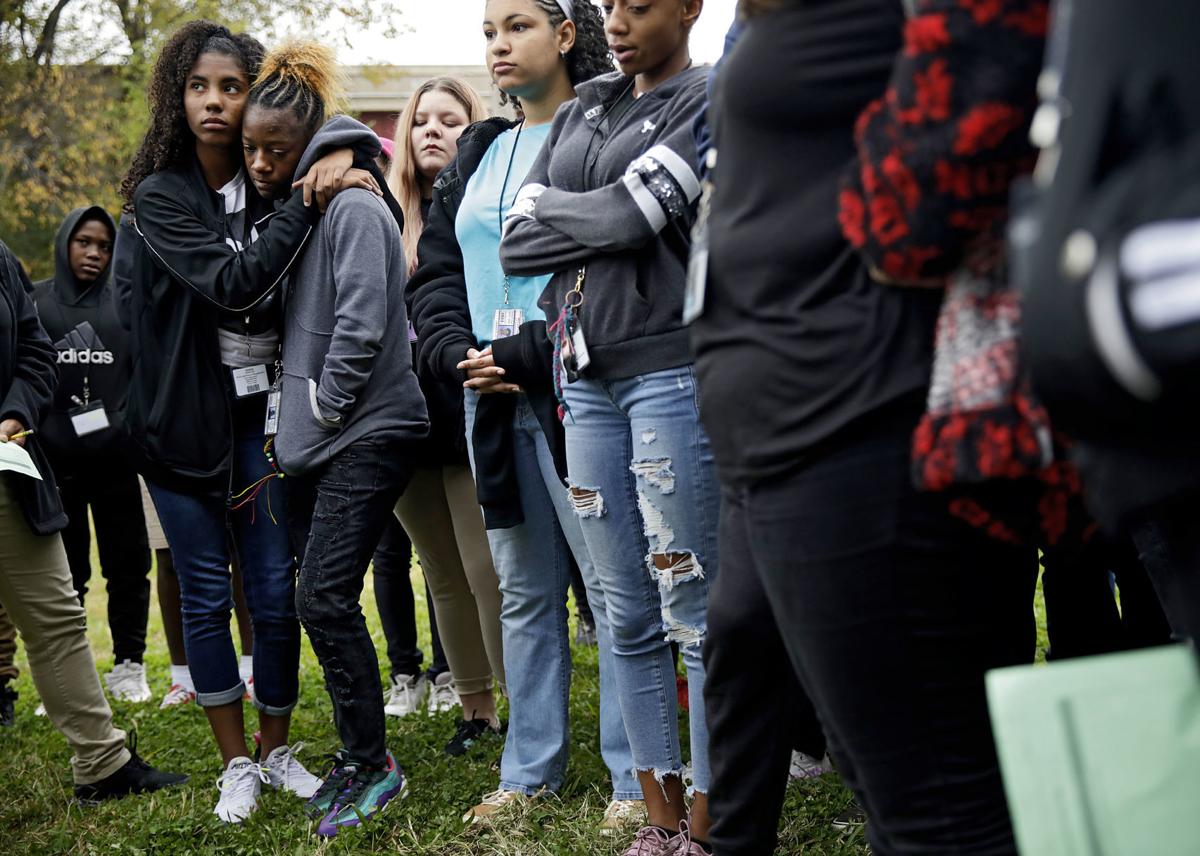 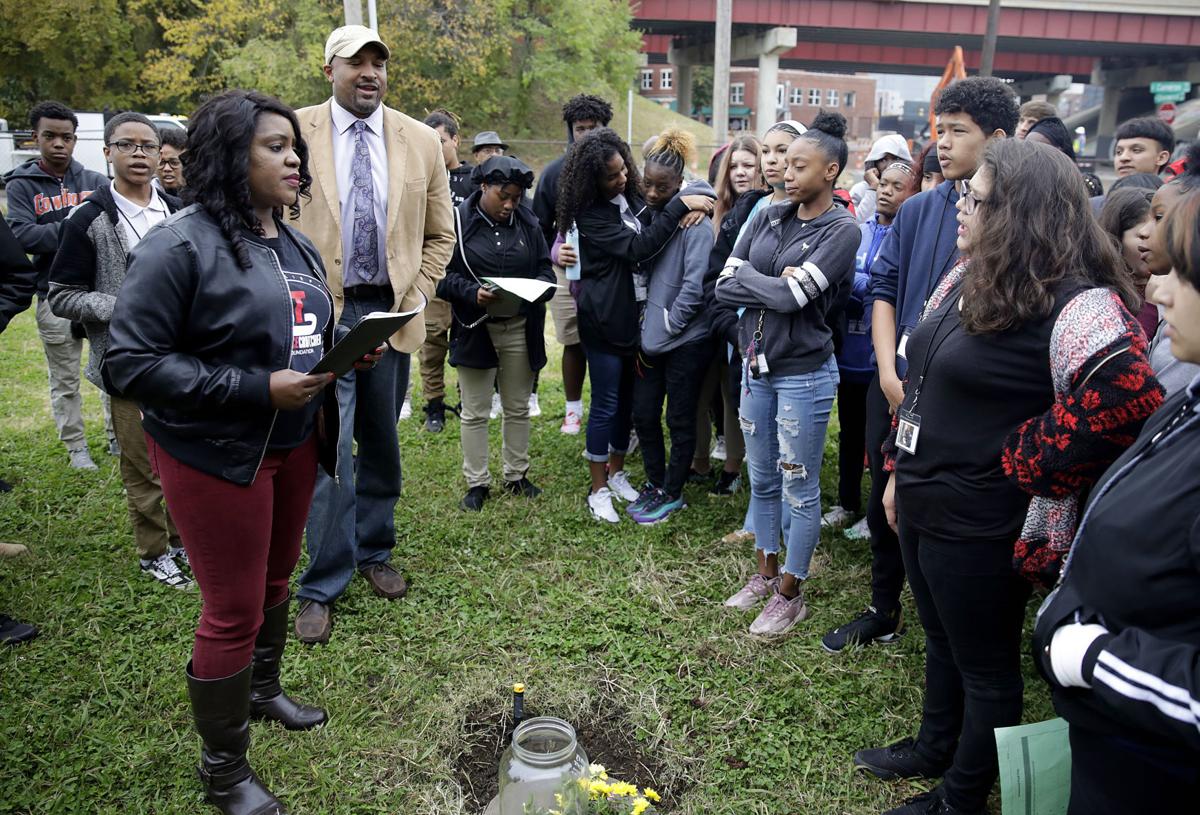 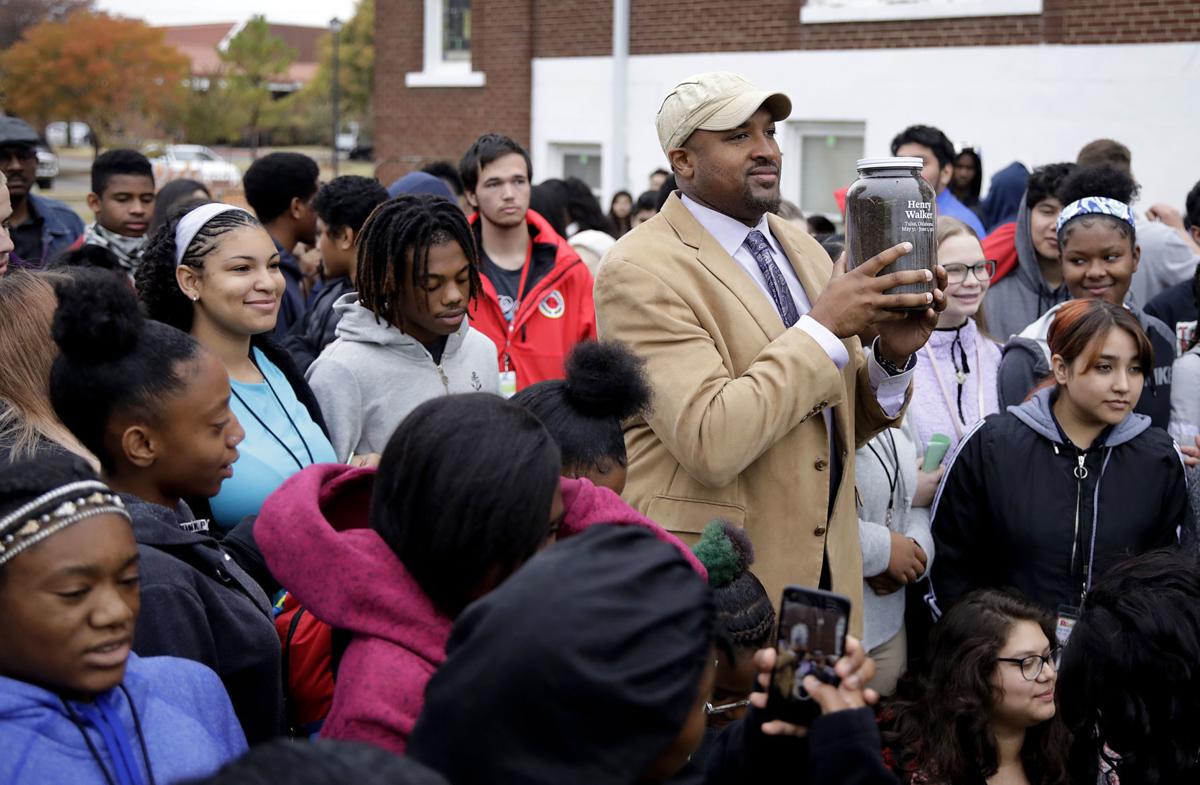 Rev. Robert Turner holds a jar of soil collected for Henry Walker by students from McLain High School for Science and Technology, at Vernon AME Church Wednesday, Nov. 6, 2019. Walker was a victim of the 1921 Tulsa Race Massacre. MIKE SIMONS/Tulsa World 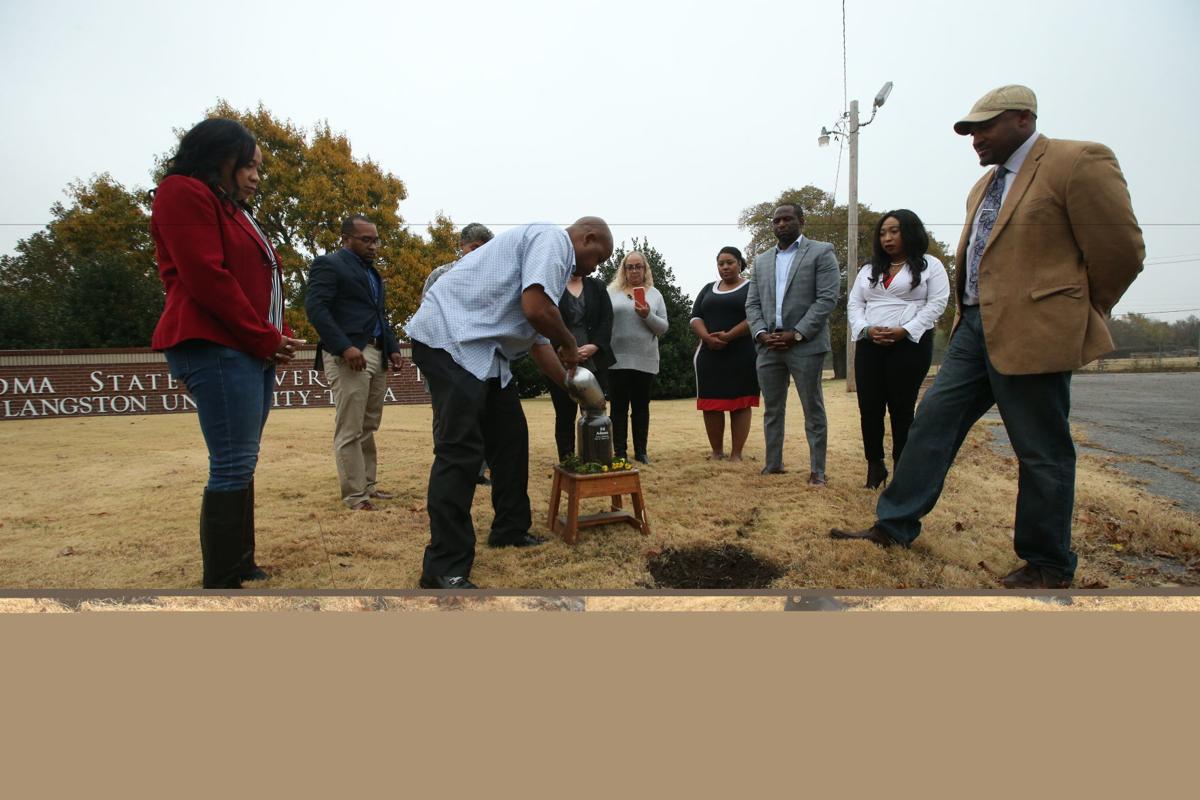 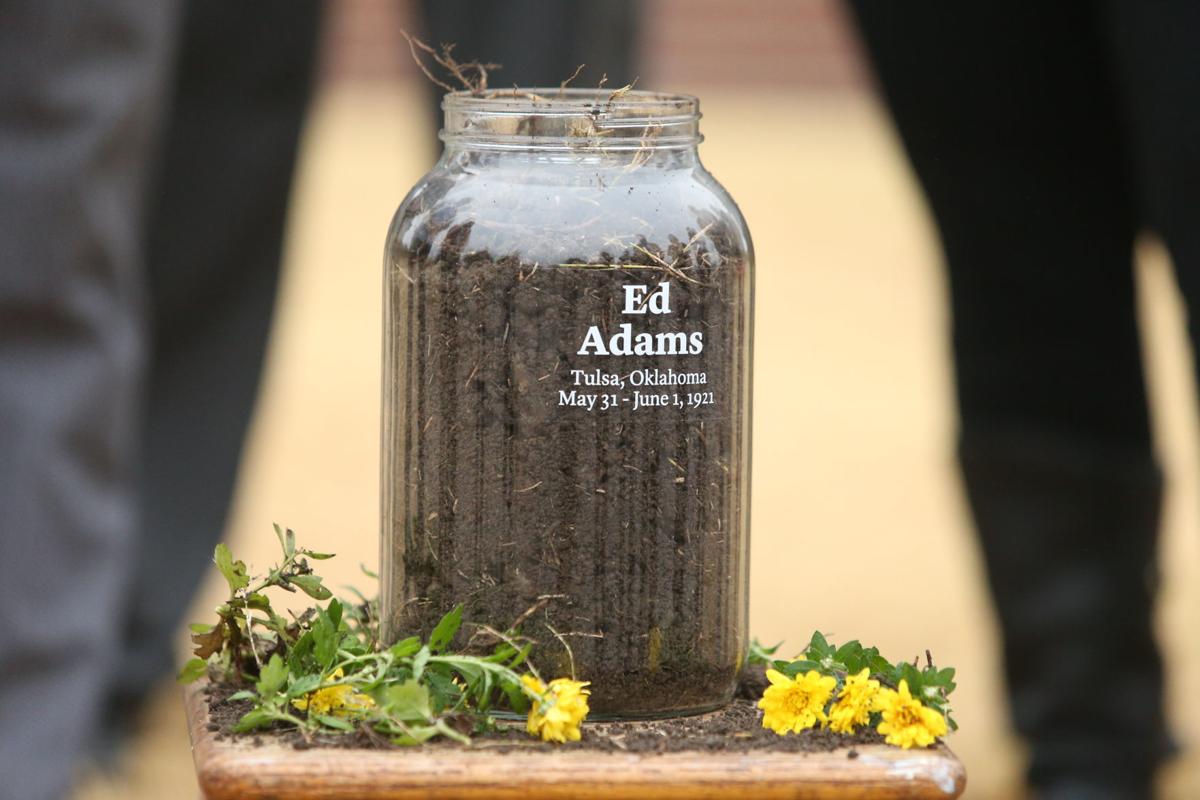 The Rev. Robert Turner holds a jar of soil collected by students on Wednesday. Henry Walker was a victim of the 1921 Tulsa Race Massacre. MIKE SIMONS/Tulsa World

Rev. Robert Turner holds a jar of soil collected for Henry Walker by students from McLain High School for Science and Technology, at Vernon AME Church Wednesday, Nov. 6, 2019. Walker was a victim of the 1921 Tulsa Race Massacre. MIKE SIMONS/Tulsa World

Resting on a concrete bench in a grassy field on the grounds of Vernon AME Church stood an empty glass jar with the name “Henry Walker” inscribed on it along with the date of the 1921 Tulsa Race Massacre.

Just below the setup was a dirt-filled hole and small shovel.

Walker was one of many people who died in the wave of violence and destruction but had not received a customary burial.

Not much was known about Walker’s life other than that he was a Greenwood District resident who died during the massacre and was reportedly hastily buried alongside other victims.

As part of its effort to honor those killed in the massacre, the group held a soil collection ceremony. More than 140 McLain High School students were invited to both observe and actively participate in the symbolic ceremony by placing soil in the jar, which will be added to a future memorial at the church.

“We’re honoring those who passed on,” said Amusan, who implored the students to shout Walker’s name in reverence. “We’re honoring the dead. We call the names of those who’ve never been buried properly. We dig them back up so we can place soil in this jar and give them a proper burial.”

While convened in a circle, students — one by one — took turns packing the special jar with dirt. Some students, not completely understanding the significance of the act, were hesitant to engage at first before finally joining their peers.

And the end of the ceremony, students were asked to describe what participating in the collection meant to them.

“It’s great that these people can live on and have a proper burial,” one student said.

Said another: “I think it’s so sad that so many innocent lives were taken from their own families. It’s time to honor our people. This is really beautiful that we’re honoring them.”

Later in the day, members of the Oklahoma Legislative Black Caucus collected soil for Adams, 32, from an area in the 300 block of North Greenwood Avenue, where he was believed to have been killed during the race massacre.

Robert Turner, pastor of the Vernon AME Church, said he did not know much about Adams other than his age, that he was African-American and that he was killed during the massacre.

Turner said not much was done in the way of record-keeping for victims. Those involved hope to discover more about the victims who were memorialized Wednesday.

“This is vital history,” Turner said. “When people drive up and down this street, when people go up on that interstate (I-244), they’re traveling through a crime scene, and it’s a crime scene that still has not been adjudicated.”

State Sen. Kevin Matthews, D-Tulsa, said the soil collection was a way to pay homage to the past. Matthews did not recall being taught about the race massacre in school. He specifically recalled that he was an adult before someone shared that history with him.

“The significance, particularly as an African-American, is we have found that people who look like me were slaughtered and were never given a formal ceremony or a funeral,” Matthews said. “It’s a very emotional thing to participate in and acknowledge that.”

The effort is all part of a partnership with the Equal Justice Initiative in Montgomery, Alabama, for an outdoor memorial to be erected at the Greenwood District church to further inform the public about the race massacre. The project, announced in May, also included the placement of a historical marker on the church’s property that pays homage to Black Wall Street.

The coalition estimated that the project will cost about $3 million to be funded through donations and various fundraising efforts.

Soil collection from locations where victims were killed is also an integral part of the project.

It is why Wednesday meant so much to those who wanted to expose the current generation to all that encompasses the Greenwood story.

“It’s really important to get our kids here because we have to give the story they’re not told,” said Williams. “So often our history is whitewashed or reduced to one page, and that’s all that they get.”

“It’s real important from a historical point of view because so much of our history is being lost with these young people,” said McLain Assistant Principal Maurice Walker. “We adults are not passing it along, and I commend our teachers for organizing and bringing these young people out here so they can see something that is very tragic and historic in their own community.”

A Tulsa transplant from Chicago, Walker himself learned of the race massacre as student at Langston University. These days, he said, “not enough” students in general are aware of the event despite McLain teachers diligently incorporating the material into their own lesson plans.

“Just being Americans and being citizens period ... they need to know this,” said Walker.