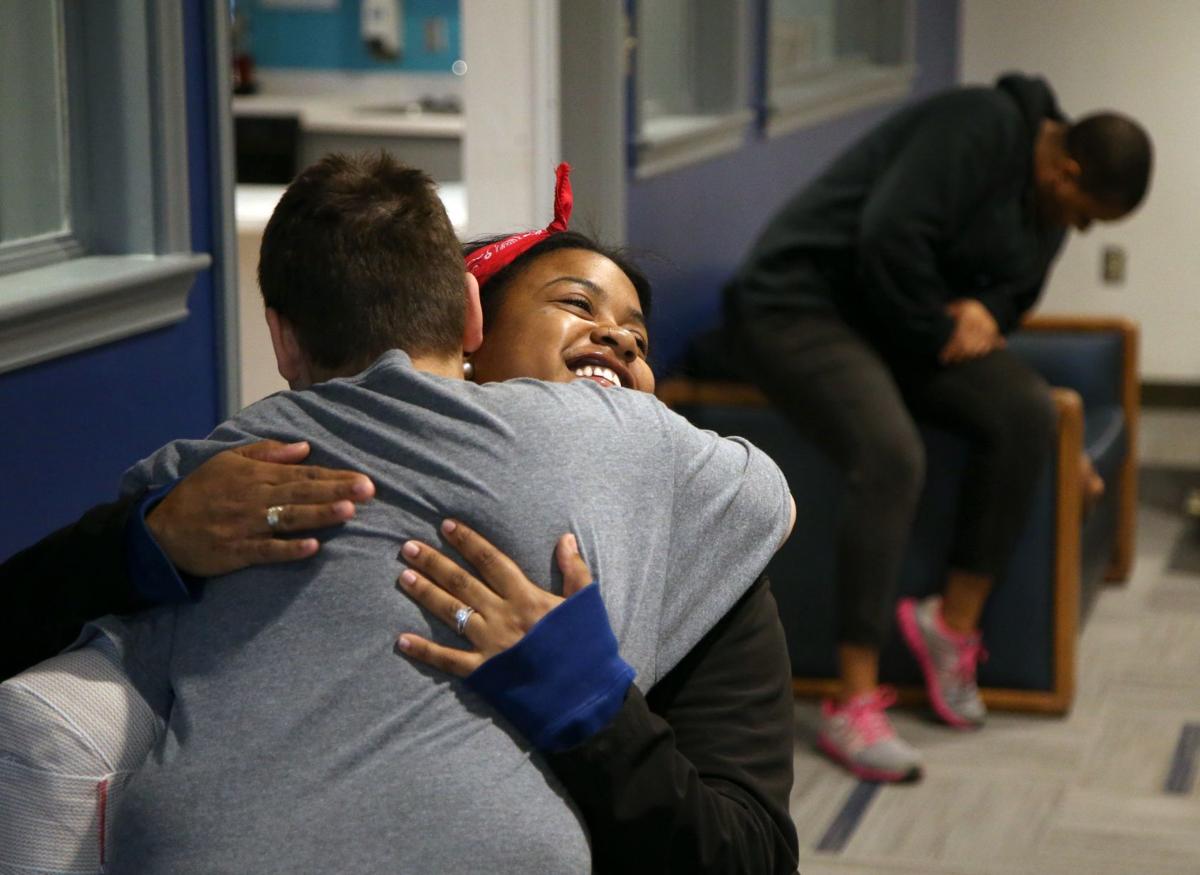 Tyriel Demry (center), a rehabilitation specialist at the Laura Dester Children’s Center in Tulsa, Okla., gets a hug from a young resident while another employee works behind her on Thursday, January 9, 2020. MATT BARNARD/Tulsa World 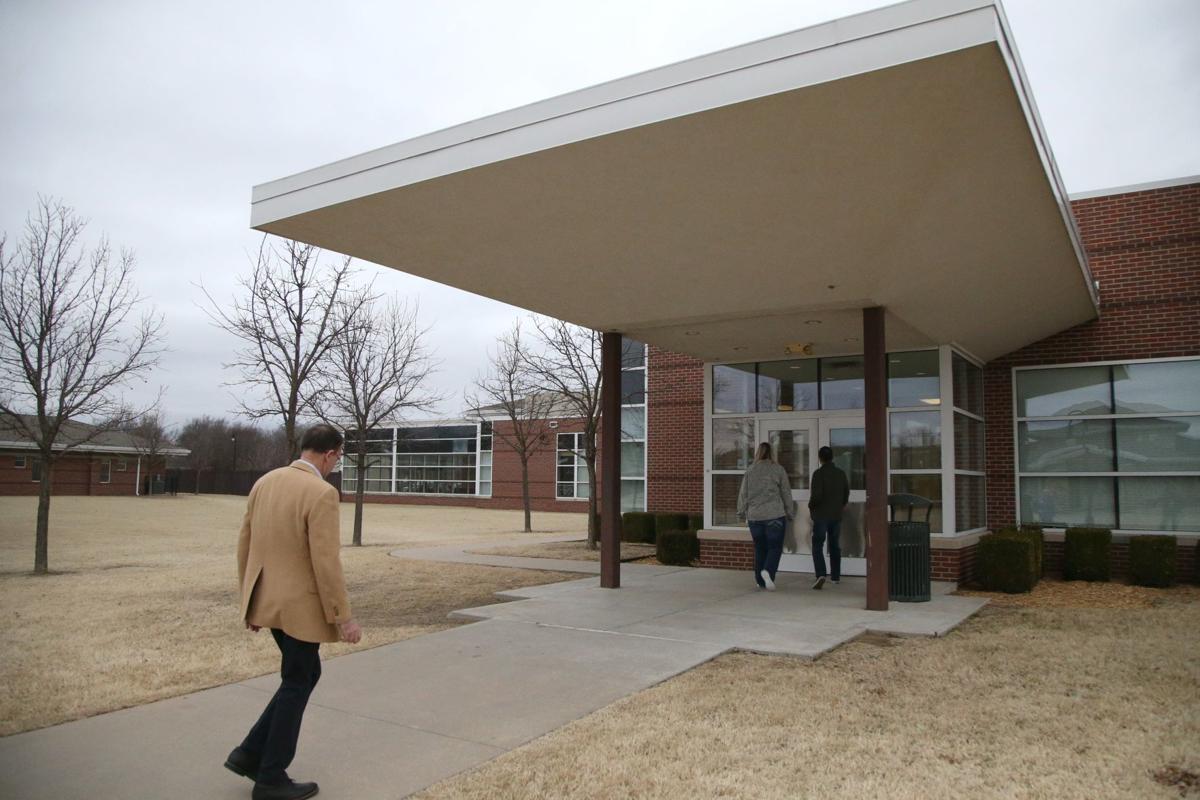 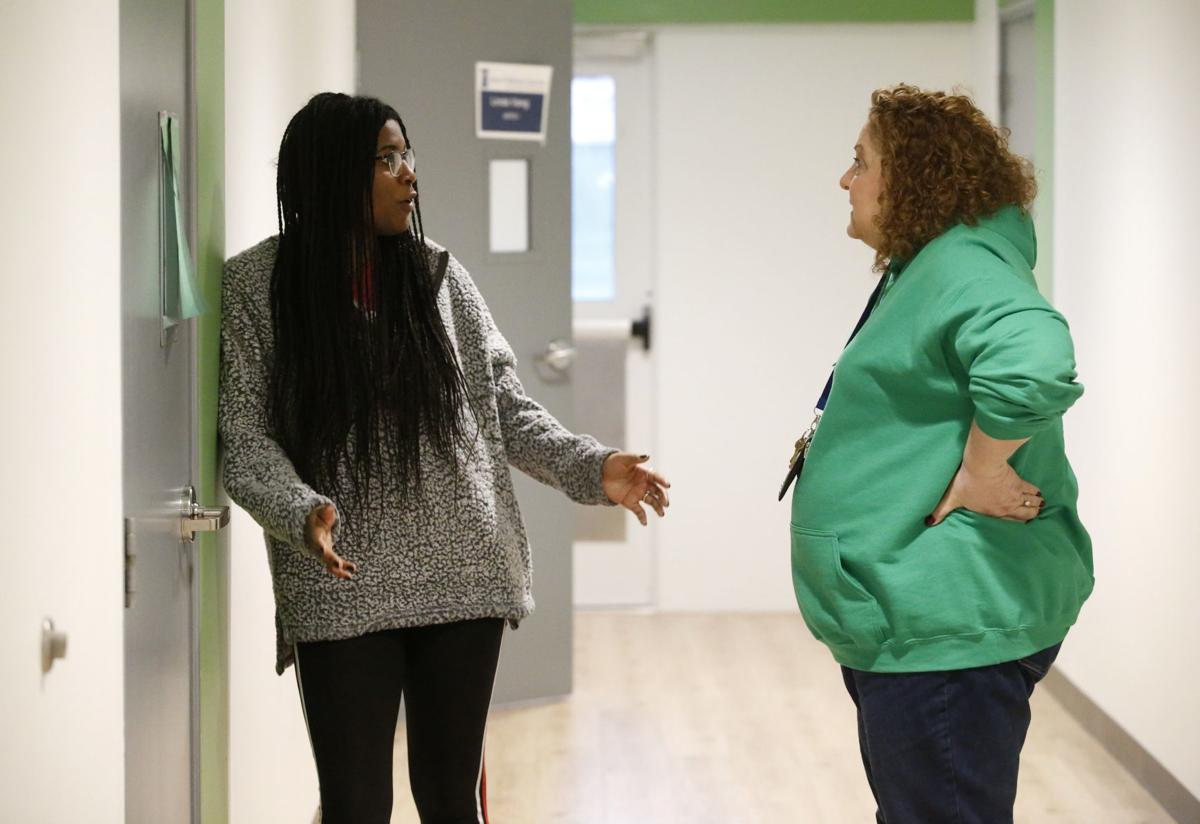 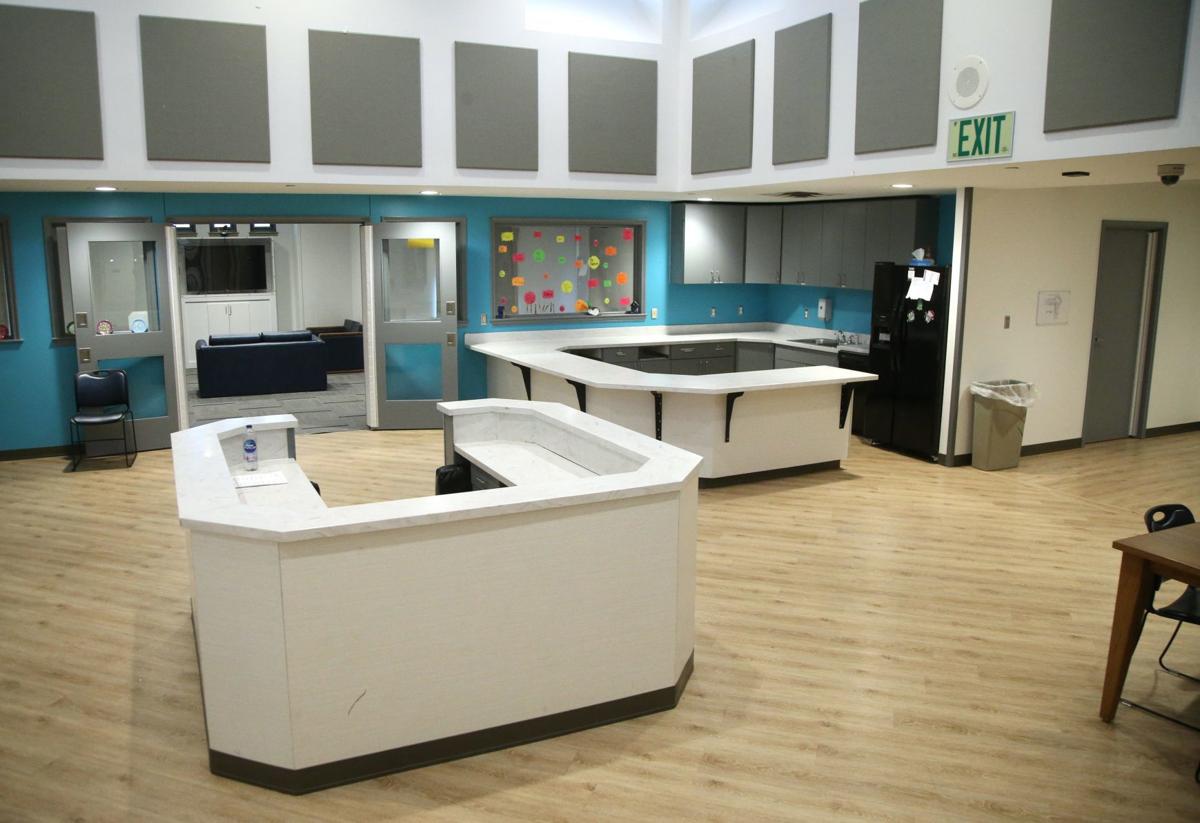 A common area in a residential cottage at the Laura Dester Children’s Center in Tulsa, Okla., on Thursday, January 9, 2020. MATT BARNARD/Tulsa World 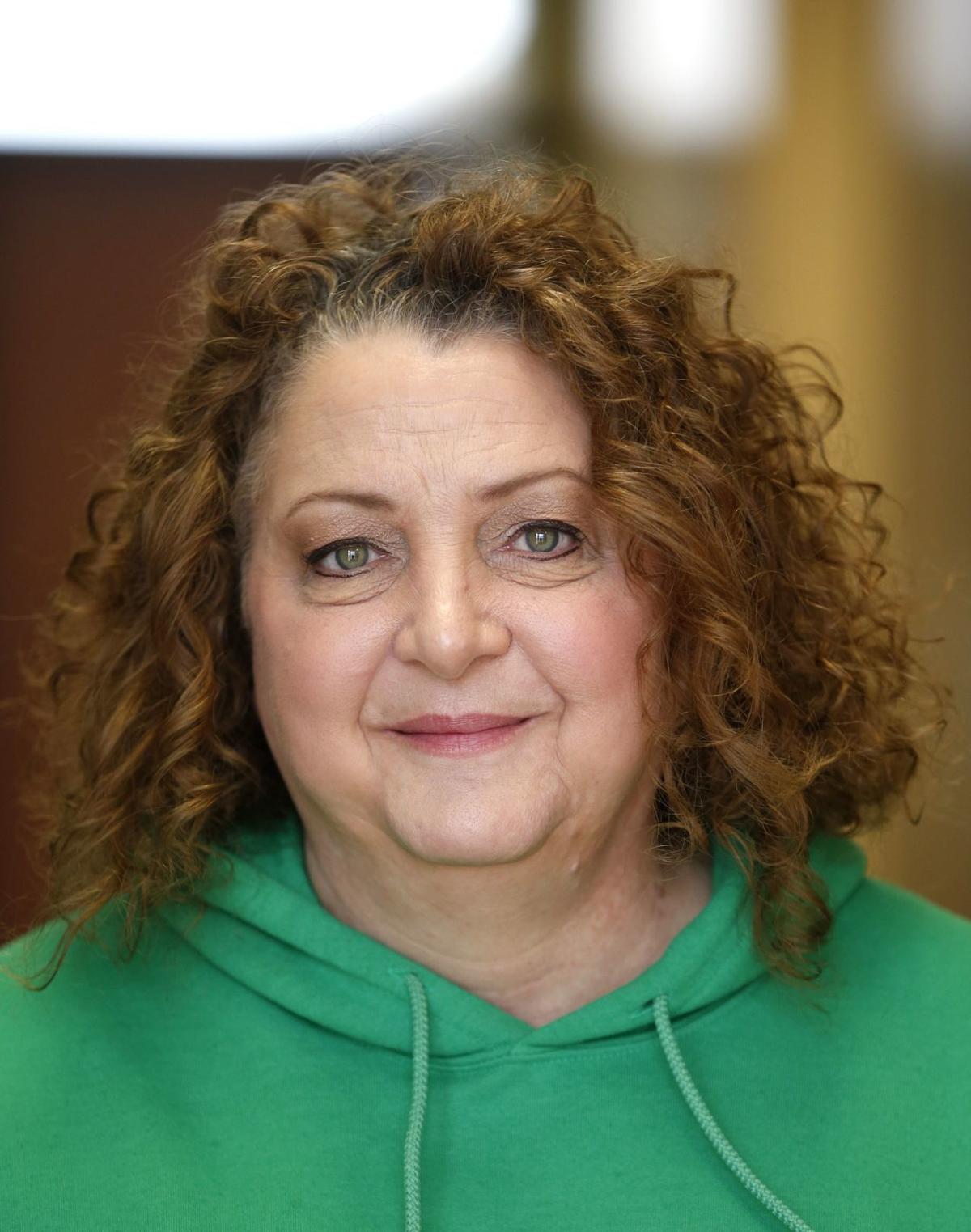 Tyriel Demry (center), a rehabilitation specialist at the Laura Dester Children’s Center in Tulsa, Okla., gets a hug from a young resident while another employee works behind her on Thursday, January 9, 2020. MATT BARNARD/Tulsa World

A common area in a residential cottage at the Laura Dester Children’s Center in Tulsa, Okla., on Thursday, January 9, 2020. MATT BARNARD/Tulsa World

Halloween was a weeklong celebration this year at the Laura Dester Children’s Center in Tulsa.

Staff members dressed up with the kids each day and took as many photographs as pieces of candy were collected on campus. After all, some of the youngsters have bounced around the state’s child welfare system so often and for so long they don’t know where they came from or have pictures of themselves growing up.

The center in January is marking its first year as a treatment center — no longer a shelter — for foster children with complex special needs. The first child successfully treated is expected to be placed this week into a companion arrangement by an Oklahoma City provider. Two others just became eligible for placement.

“You have to remember this is their childhood. This is what they get; we’re it,” said Naj Kutait-Faulkner, a behavioral analyst and behavioral practitioner. “It can’t just be a facility. These are children. At our cottage, when we’re leaving for the evening, every single kid — every single kid — is going to want to come up and have a hug, and they want you to kiss their head.”

Only a year and a half ago the center was shuttered and the last foster kid removed to another placement. An oversight panel three months earlier ordered the center closed, citing an “alarmingly high” number of child maltreatment reports and confirmed cases that mostly stemmed from lack of supervision and unsafe living conditions.

Laura Dester was the final state-operated shelter in Oklahoma. It evolved into a last-resort placement for children with complex issues as the Oklahoma Department of Human Services worked to improve its child welfare system to comply with reforms required by the settlement in a 2008 federal class-action lawsuit alleging abuse and neglect of foster kids.

The facility at 7318 E. Pine St. is still owned by the state but now is operated by Liberty of Oklahoma Corp., which runs the Greer Center in Enid that similarly treats adults with co-occurring disorders.

Foster children with co-occurring intellectual disabilities and behavioral challenges — many with underlying mental illness — receive short-term treatment to improve quality of life and allow them to graduate into the least restrictive placement as possible.

There are book and drama clubs at Laura Dester. Girls have makeup or hair nights. The boys tend to engage in more physical activities, such as sports.

Employees say routine, structure and social interaction are as important as anything to a subset of children who only know instability. The kids all want assurances staff members will return the next day and not leave them.

Casey Nelson, a health service psychologist, said they incrementally learn calming skills, patience, delayed gratification and cooperation — tools to help meet their special challenges and allow them to be reintegrated into society.

Without the treatment program, many of the kids likely would still be shuffling from foster homes to shelters to psychiatric hospitals. Some bounce dozens of times, including a 16-year-old boy whom Nelson said suffers with transitions and struggles with new faces.

“It’s at that level of consistency that a lot of these kids need.”

About 80% of adults treated at Greer were foster kids

The hope is the program at Laura Dester will help children with the same clinical needs as the adults who are treated at Greer in Enid achieve better quality of life sooner and not have to enter Greer as adults.

In its two decades, about 80% of the adults treated at Greer for co-occurring disorders had been foster children at one point, according to Hugh Sage, executive director of that facility’s operations.

Greer has stabilized 225 of its 259 clients, or 87%. Only four, or 2%, have returned within the first year. Another 11, or 6%, have returned after a year. The average stabilization — or “placement-ready” status — has taken about nine months.

Sage said they’re finding out it doesn’t take much to bring out a significant difference in the children during treatment. The real problem is how long it takes to be able to actually place a stabilized kid.

The girl who is scheduled to be the first to leave Laura Dester stabilized in June after only five months, he said.

“There is an enormous amount of work that needs to be done, and we’re all learning — child welfare is learning as well — about how to make the transition more successful and to shorten the length of time required,” Sage said.

‘These kids aren’t one size fits all’

The Oklahoma Department of Human Services views the treatment program at Laura Dester as a piece of the puzzle, not the only option or service needed for kids in its care with developmental disabilities.

Deb Shropshire, DHS director of child welfare, said she wants the state to be able to put providers in homes, similar to home health nursing, to help families with special needs children.

Shropshire said the state is moving toward being able to provide a transition service any time a child moves from a group to family setting. She pointed to Laura Dester, which in a few weeks will open one of its unused cottages to train parents and caregivers on behavioral management techniques to try to ensure successful placements.

“These kids aren’t one size fits all,” Shropshire said. “They come to us each one with unique circumstances.”

The first renovated cottage at Laura Dester reopened a year ago, followed by the other two in April. Twenty of the 24 available beds are full at the moment.

A new client is expected this week, and the youngsters will make signs and help throw a party to make the child feel welcome as they do with all arrivals.

They bring whatever bedding, toys or nick knacks with them. Photos will be posted on walls.

But it’s not the same as if they had a home to look forward to.

“Many of our kids have asked to go home with staff,” said Kim Wotring, a behavioral analyst and behavioral practitioner. “ ‘Will you adopt me?’ They don’t have that.”