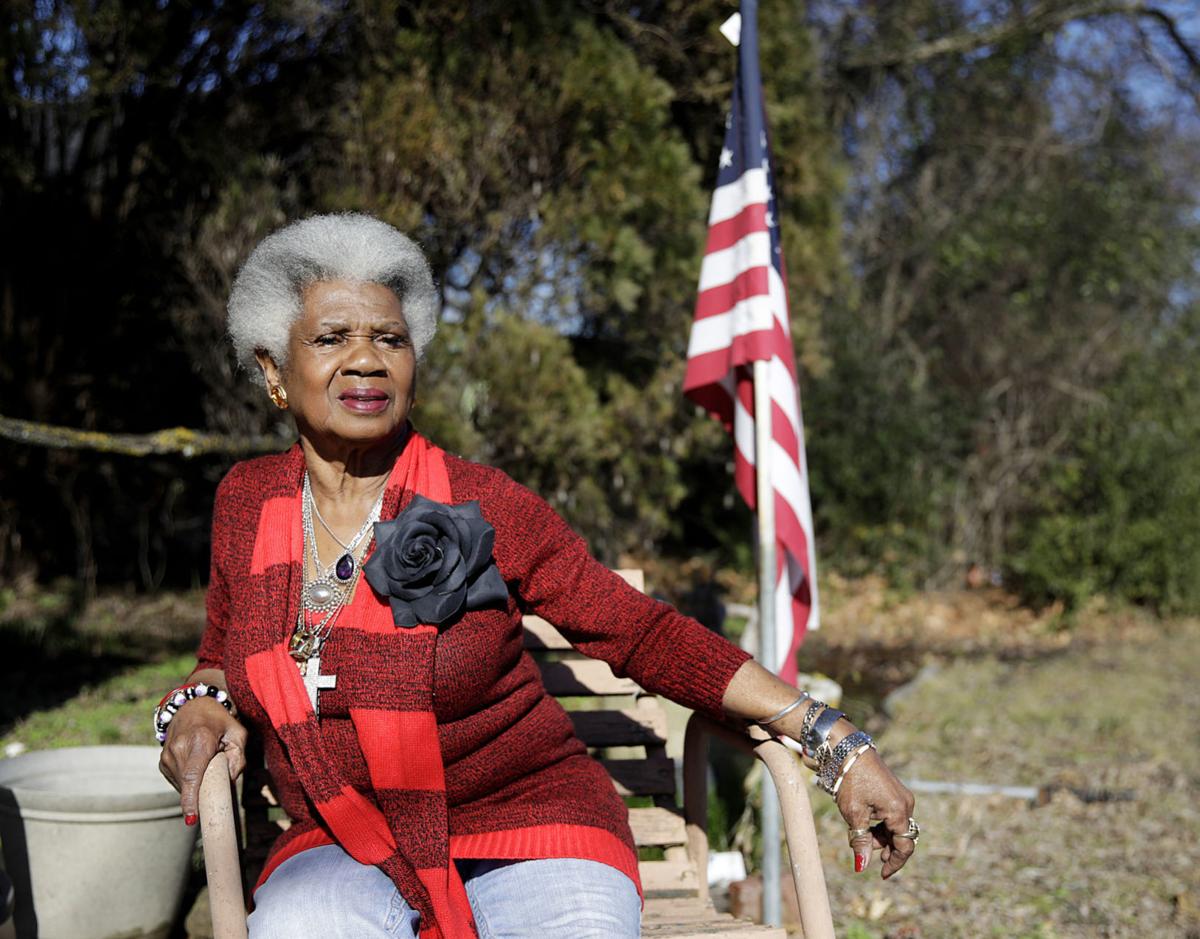 Lelia Foley-Davis, who became the nation’s the first African American female mayor when elected in 1973 in Taft, poses for a portrait in her front yard. MIKE SIMONS/Tulsa World 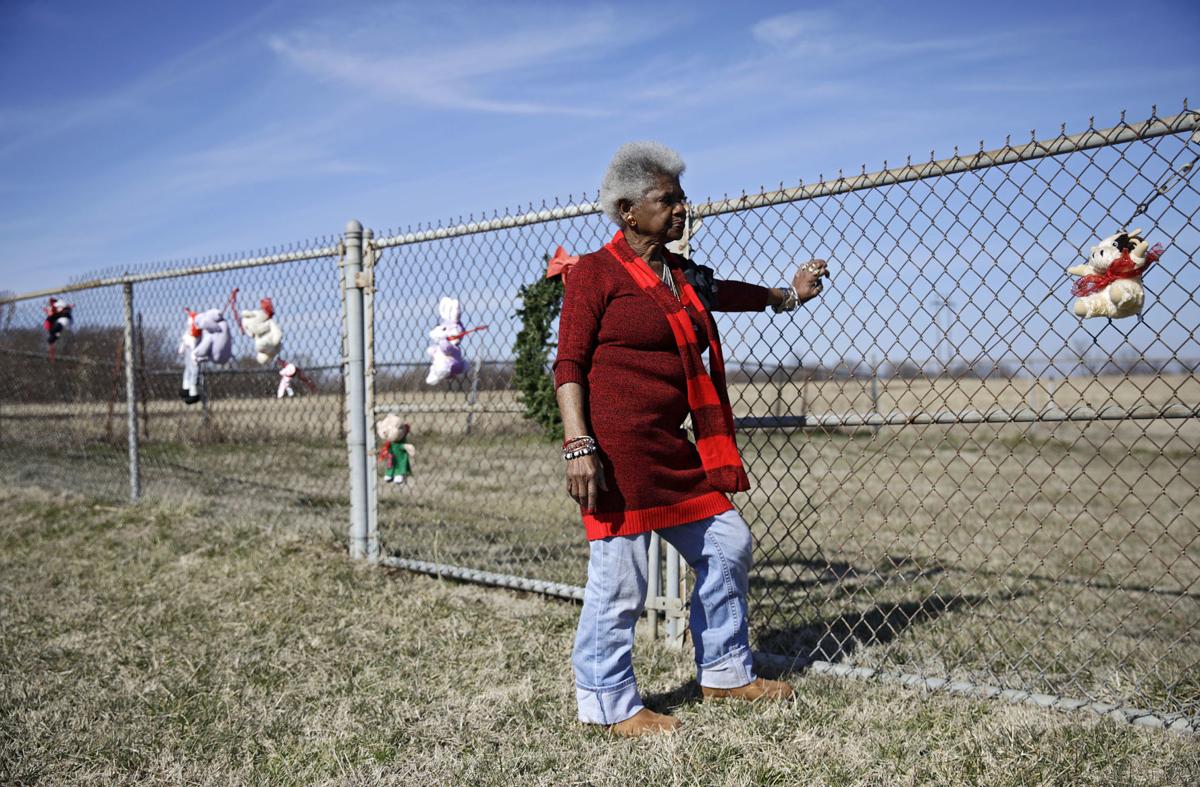 Lelia Foley-Davis views an area of unmarked graves from the Industrial Institute for the Deaf, Blind, and Orphans of the Colored Race in Taft. Foley-Davis and others decorated the fence around the area for the children buried there. Foley-Davis was the first black woman ever elected mayor when she was elected chief executive of Taft in 1973. MIKE SIMONS/Tulsa World 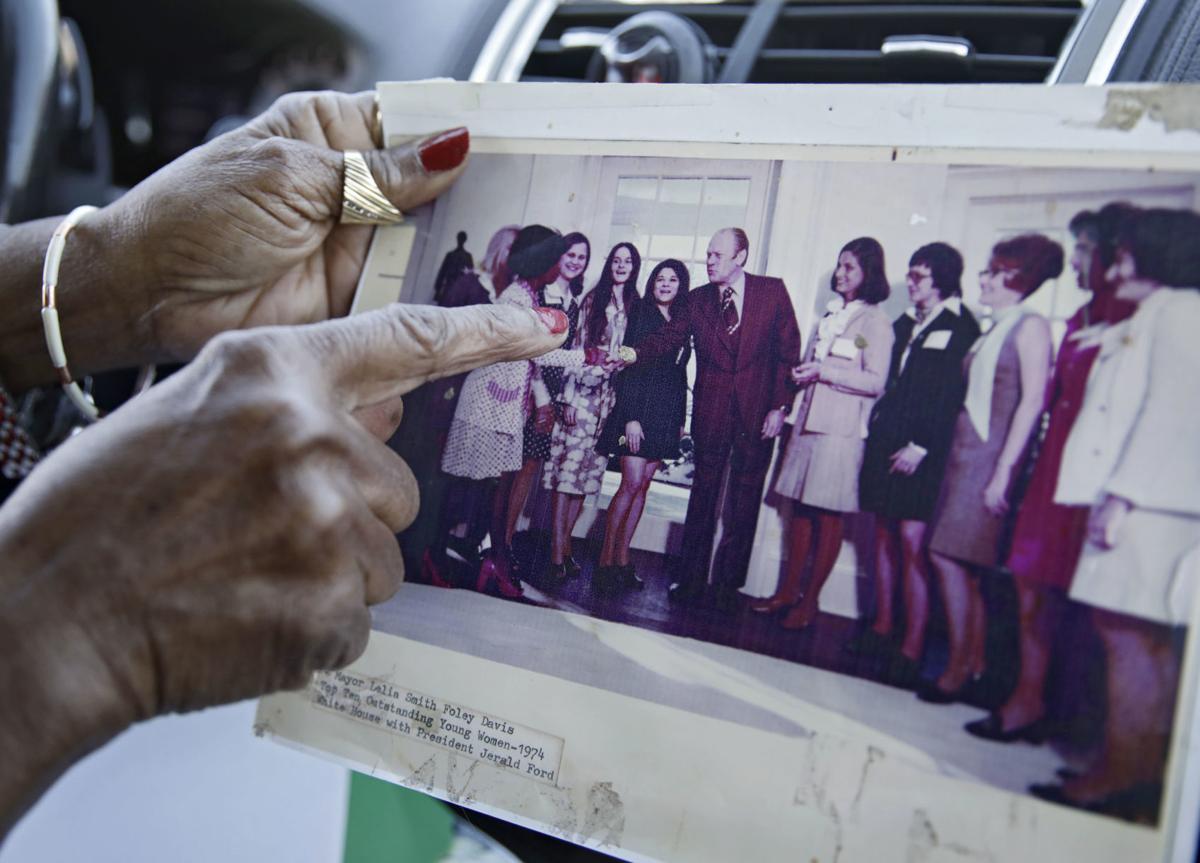 Lelia Foley-Davis talks about a photo from when she met President Gerald Ford in 1974 Monday, Jan. 27, 2020. Foley-Davis was the first African-American woman ever elected mayor in 1973. MIKE SIMONS/Tulsa World 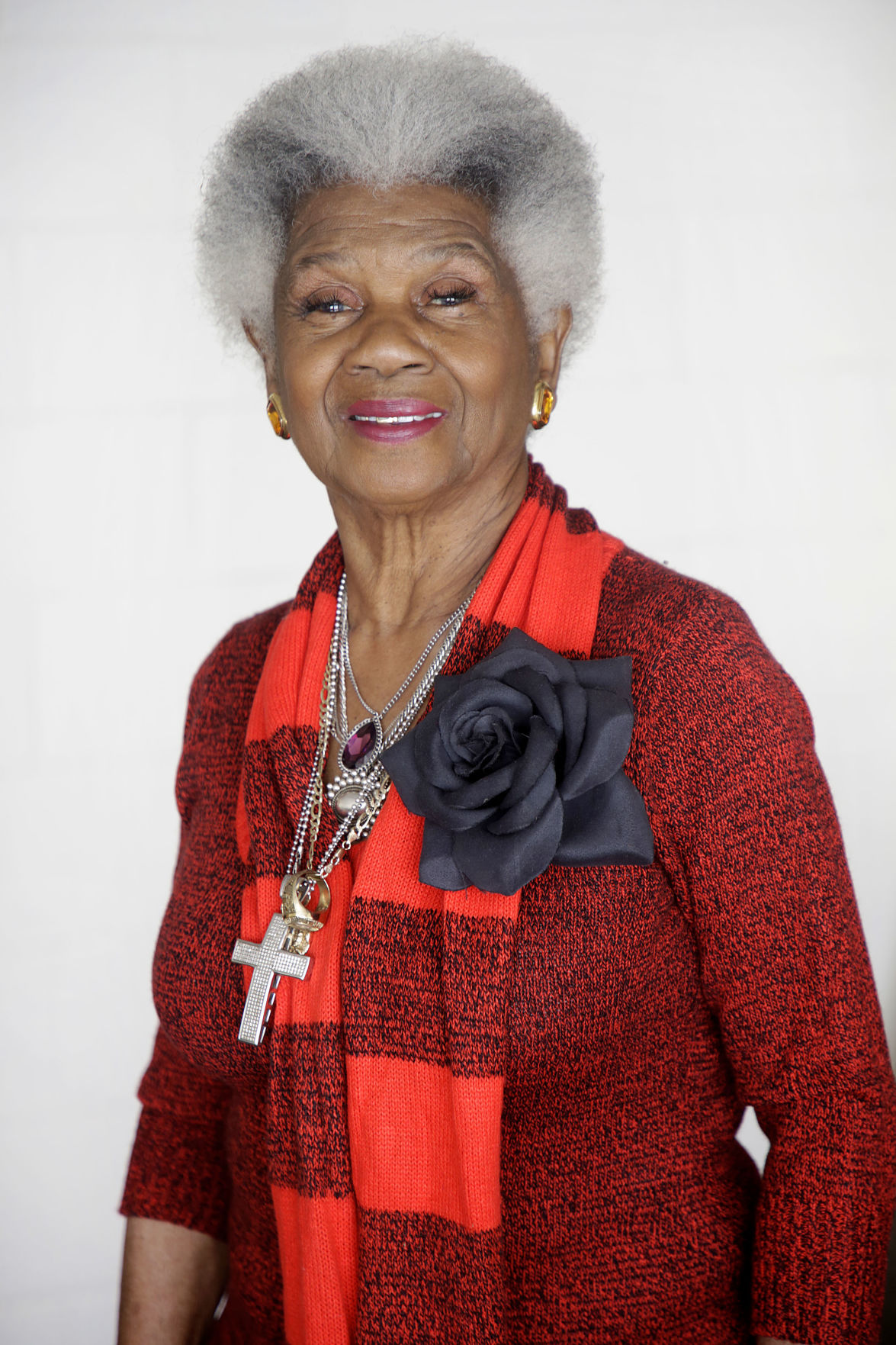 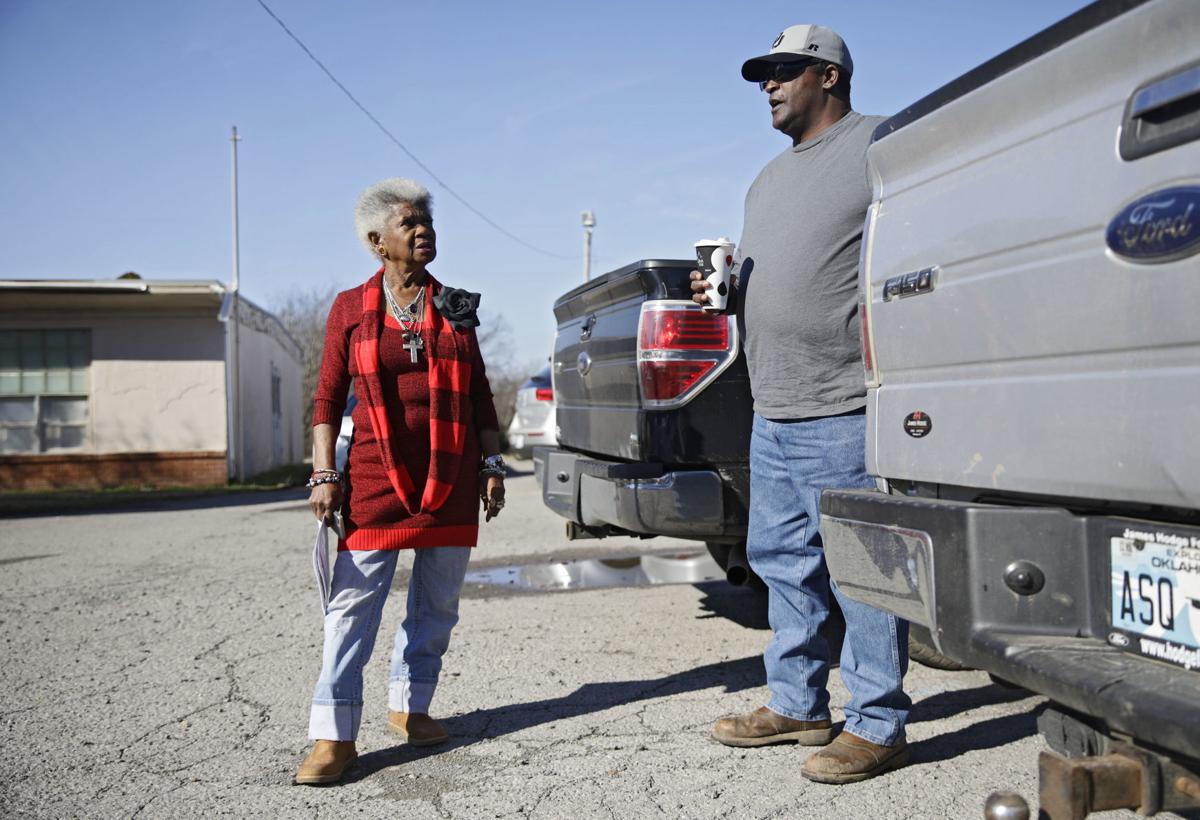 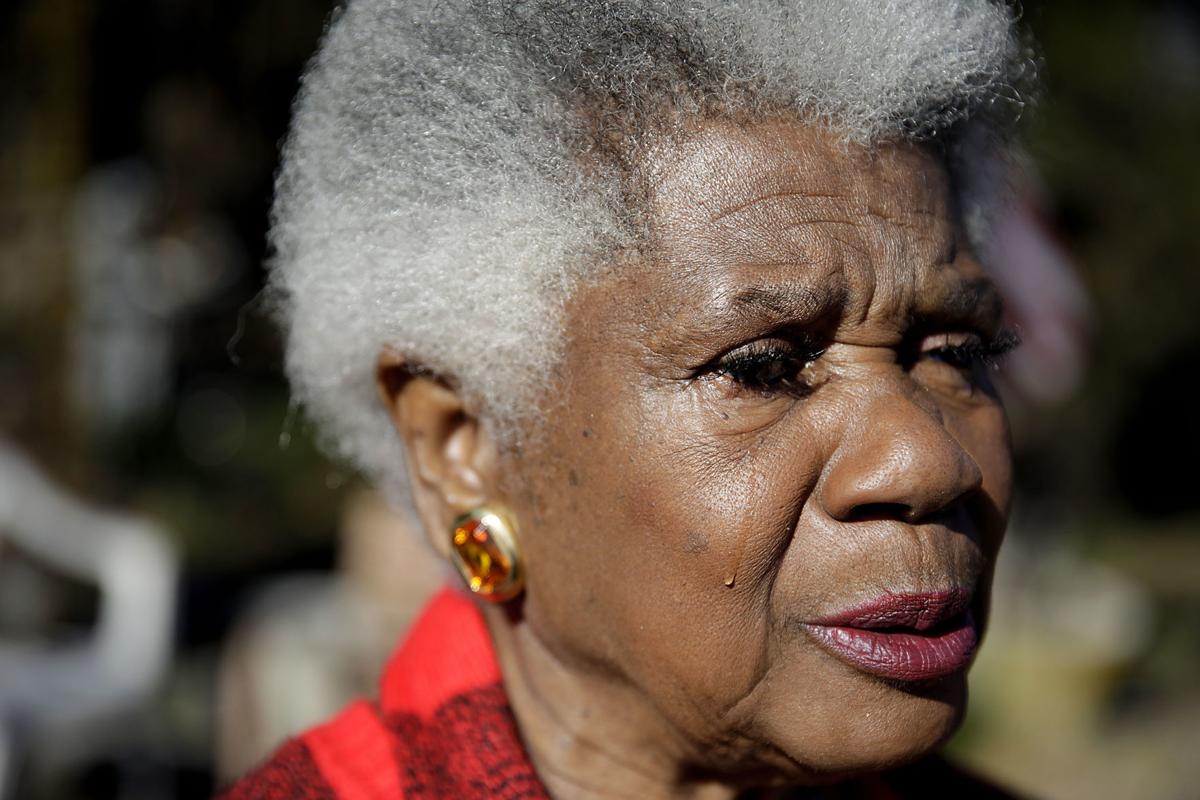 Lelia Foley-Davis cries as she recounts a feud she had with Redd Foxx while serving as the mayor of Taft. MIKE SIMONS/Tulsa World

Lelia Foley-Davis, who became the nation’s the first African American female mayor when elected in 1973 in Taft, poses for a portrait in her front yard. MIKE SIMONS/Tulsa World

Lelia Foley-Davis views an area of unmarked graves from the Industrial Institute for the Deaf, Blind, and Orphans of the Colored Race in Taft. Foley-Davis and others decorated the fence around the area for the children buried there. Foley-Davis was the first black woman ever elected mayor when she was elected chief executive of Taft in 1973. MIKE SIMONS/Tulsa World

Lelia Foley-Davis talks about a photo from when she met President Gerald Ford in 1974 Monday, Jan. 27, 2020. Foley-Davis was the first African-American woman ever elected mayor in 1973. MIKE SIMONS/Tulsa World

Lelia Foley-Davis cries as she recounts a feud she had with Redd Foxx while serving as the mayor of Taft. MIKE SIMONS/Tulsa World

TAFT — As a divorced mother of five on welfare, Lelia Foley-Davis didn’t fit everyone’s picture of what a public officeholder should look like.

“I was out campaigning — I never will forget it — this one lady told me, ‘Do you think we want a person to lead us with five children on welfare?’ And then she slammed her door,” Foley-Davis said.

“I was startled,” she added.

But continuing on until she’d knocked every door in town, Foley-Davis eventually won over most of her fellow Taft residents.

And when all votes in the 1973 municipal election were tallied, the unlikely candidate had earned her place in history.

In being elected mayor of Taft, Foley-Davis, 30 at the time, had become the nation’s first black female mayor.

Her devotion has not lessened to the largely African American community and its roughly 250 citizens.

Foley-Davis, now 78, has held office in Taft pretty much continuously since 1973. Much of that time has been as mayor. For the last few years, she’s been a town councilwoman.

“They know I’m going to be there and speak up,” she said of the voters who “still want me, still believe in me.”

As long as that’s the case, she’ll be involved in some way.

Even at the beginning, when she found herself an overnight celebrity, she didn’t allow the hype to distract her.

One of the stories Foley-Davis is fond of telling is about her visit to the White House with a group of the nation’s “outstanding young women.”

Instead of being overawed, the newly elected mayor of Taft immediately shook President Gerald Ford’s hand and told him she wanted to talk about her town.

Ford took her seriously, she said, and they went aside to chat.

Within three months, she had coordinated with the administration on a plan for more housing. The community of Taft ultimately received 24 rural rental houses to help its lower income residents, including young mothers on welfare, she said.

It remains one of Foley-Davis’ proudest achievements.

Maybe her most impressive one, though, is just surviving in politics. As she kept running for mayor and winning, there were costs, she said.

Along with staunch supporters, Foley-Davis also made enemies. Most of them, she’s glad to say, she’s now outlived.

But the malicious gossip, rumors of wrongdoing and efforts to get her in trouble took their toll.

“I’ve been through hell,” she said.

Being a woman in office was challenge enough, she added. Some of the male city leaders respected her from the start. For others, it took a while.

“I had some battles,” she said. “They found out I was not taking no. God had placed me here.”

Along with Foley-Davis’ achievements have come a few disappointments.

No bigger one was the community’s loss of its longtime schools.

“I fought that tooth and nail,” Foley-Davis said, adding that, unfortunately, it was to no avail. Taft schools closed for good in 1989; local children are bussed to Muskogee and Haskell.

For years, Taft was also home to two facilities that served special needs children: one for those with mentally disabilities, the other for the “deaf, blind and orphaned.”

In the 1980s, when the state decided to convert those facilities into minimum-security prisons for men and women, Foley-Davis fought to stop it.

Again, however, it was to no avail.

“They moved the children out and moved the inmates in,” she said.

But nothing from Foley-Davis’ tenure makes her shake her head more bitterly than the town’s bizarre relationship with a flamboyant black entertainer.

“I was shaking when I got the call from him,” she said of first learning in 1974 that Redd Foxx, star of television’s “Sanford and Son,” wanted her to arrange a visit for him.

Taking his cue from black stars Sammy Davis Jr. and Flip Wilson, who donated money to other of Oklahoma’s struggling black towns, the comedian wanted to “adopt” Taft, he said.

Foley-Davis played along, thinking of it as good for the town. She even went so far as to appoint Foxx honorary police chief.

But it didn’t take the mayor long to realize the truth, she said: Foxx was more interested in milking Taft for publicity than doing it any real good.

“We never got a dime,” Foley-Davis said of the money Foxx claimed to be donating or raising from other sources. “It was all promises and lies.”

Then there were stunts like Foxx’s trying to get the town to rename itself “Reddfoxxville.”

And the two police cars he donated. Each emblazoned with his name and face, they were so broken down, the community couldn’t afford to keep them going.

Foley-Davis finally put her foot down, and the starstruck town cut ties with the entertainer.

“It was nothing but a bunch of heartache,” she said.

Much of Foley-Davis’ heartache these days comes from another source.

“Nothing hurts me more than to see those buses come through every morning and our kids have to line up and get on them,” she said, adding that it’s been 30 years since Taft schools closed, but she’s still sad about it.

“We’ve had a whole generation now that has had to go elsewhere for school.”

But if Foley-Davis can’t keep Taft’s children at home, she at least can make sure some of its former children are not forgotten.

One of her latest projects focuses on a patch of pasture. Near one of the former institutions for special needs children, it’s where many of the orphaned children who died there were buried, she said.

The graves are unmarked, and “a lot of people don’t know it exists,” Foley-Davis said of the burial site.

Her goal is to get a memorial erected there. Recently, as a sort of makeshift memorial, she arranged some children’s toys around the site.

“It’s important to remember because those are somebody’s babies out there,” she said.

The site is also a connection to Foley-Davis’ own past.

Her family’s home, she said, was next door to the institution, and her mother often had some of the children over for meals.

Her family was of humble means. Her father was a sharecropper, her mother a midwife. They lived in a three-room shotgun shack.

But what little they had they shared, she said.

The youngest of her parents’ 10 children, Foley-Davis attended Taft schools, going on to graduate from Moton High School there.

Before she ran for mayor of Taft, she’d initially sought a seat on the school board. She wanted to do what she could to help the schools, which her own children by then were attending.

But, pressured by local officials, she backed out the day before the election.

“They were afraid I’d get on the board and ask too many questions,” Foley-Davis said.

She made up her mind then and there, though, that she was done being pushed around.

There were other offices she could seek. The town’s highest office, for example.

Foley-Davis talked it over with her mother, and decided she was going to do it.

She was running for mayor.

In 2019, when Chicago elected its first black female mayor, making it the biggest city in the U.S. to have done so, the Washington Post called up Foley-Davis.

What advice, the reporter wanted to know, would the nation’s original black female mayor have to offer its newest one?

“I said what my father always told me, ‘You can give out, but don’t give up.’ No matter how you feel, don’t give up,” Foley-Davis said of what she’d say to new Chicago mayor Lori Lightfoot.

For any young black women who want to become leaders, she’d also add: “Believe in God first, then believe in yourself. Have respect for yourself.”

Foley-Davis is proud to think of herself as a trailblazer, helping open doors for Lightfoot and others.

But for all the honors that have come with her status, one is missing, she said: Inclusion in the Smithsonian National Museum of African American History and Culture.

Being the first black woman mayor in the country, she believes, makes her worthy of mention at the museum in Washington, D.C.

“I paved the way,” she said. “The record speaks for itself.”

And that record always comes back to Taft.

Only once has Foley-Davis wavered in her commitment to her beloved hometown.

Many years ago, during one of her visits to D.C., she was asked by Sen. Ted Kennedy if she’d “like to stay in Washington and be part of my staff.”

“I thought, ‘Lelia, that should be you sitting there next to the Obamas,’” she said, laughing.

Even if Foley-Davis could do things over, though, it would probably work out the same way.

“Just like Martin Luther King had a dream, I had a dream for Taft,” she said.

“I still have a dream for Taft.”

Name: Originally called Twine, the town was renamed Taft in 1905 after William Howard Taft, the statesman soon to become president.

Other facts: Taft is one of only 13 predominantly black towns still existing in Oklahoma. The state once was home to more than 50, more than any other state.