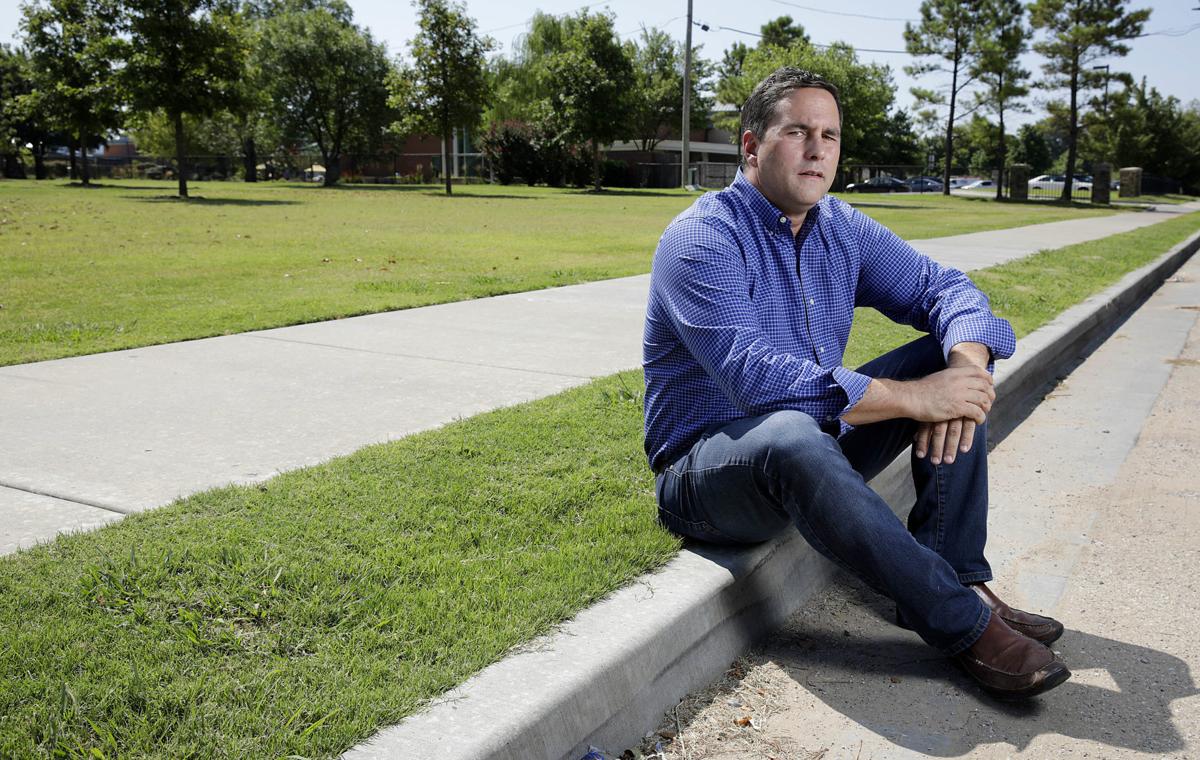 Private investigator Eric Cullen poses for a portrait in the 400 block of South Atlanta Avenue. The site, which is now a park, is the area where James Lane was fatally shot during a 1990 robbery. Corey Atchison was convicted of the shooting but was declared innocent two weeks ago, thanks largely to Cullen’s efforts, and was released after serving 28 years in prison. MIKE SIMONS/Tulsa World 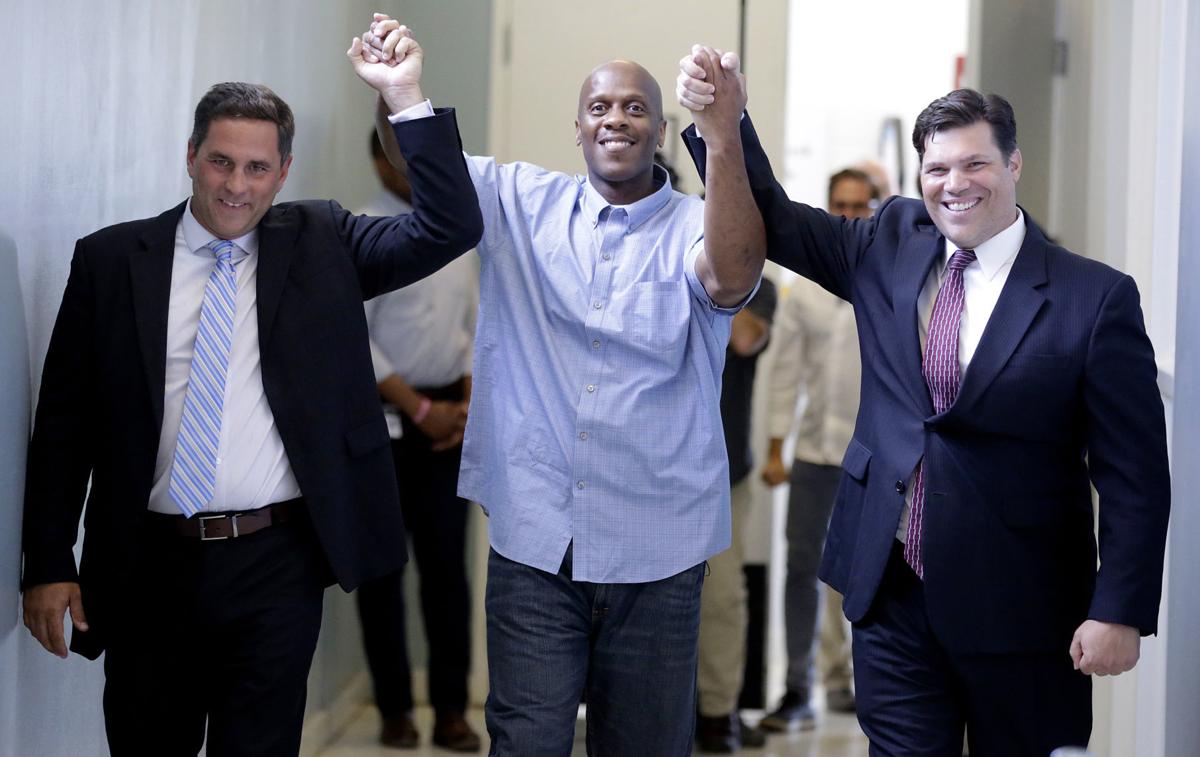 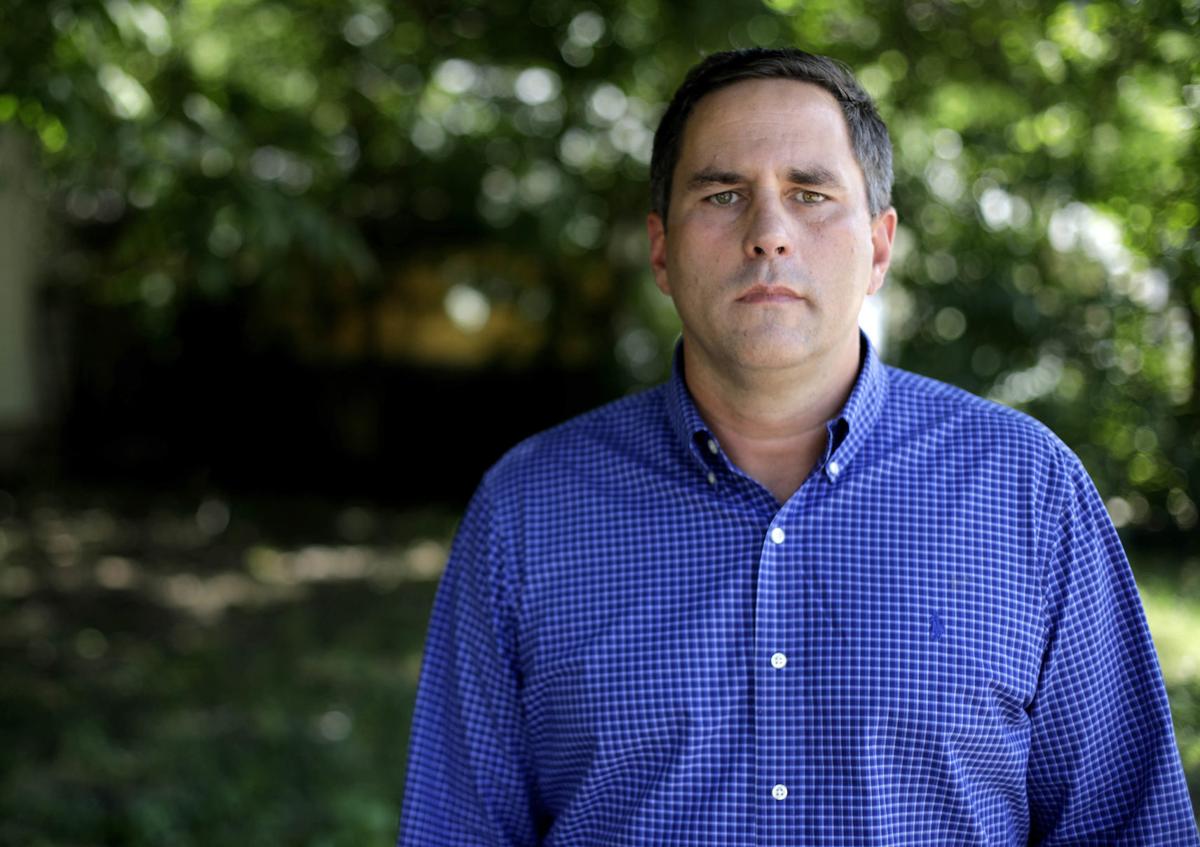 Private Investigator Eric Cullen poses in the 200 block of East 29th Street North Friday, July 26, 2019. This is the location where Karen Summers’ was fatally shot in 1994. Malcolm Scott and De’Marchoe Carpenter were convicted of the shooting, but were ultimately declared innocent and released from prison. MIKE SIMONS/Tulsa World

Private investigator Eric Cullen poses for a portrait in the 400 block of South Atlanta Avenue. The site, which is now a park, is the area where James Lane was fatally shot during a 1990 robbery. Corey Atchison was convicted of the shooting but was declared innocent two weeks ago, thanks largely to Cullen’s efforts, and was released after serving 28 years in prison. MIKE SIMONS/Tulsa World

Private Investigator Eric Cullen poses in the 200 block of East 29th Street North Friday, July 26, 2019. This is the location where Karen Summers’ was fatally shot in 1994. Malcolm Scott and De’Marchoe Carpenter were convicted of the shooting, but were ultimately declared innocent and released from prison. MIKE SIMONS/Tulsa World

Meet 7 Tulsans who have been freed after decades in prison. Two are brothers

A 'fundamental miscarriage of justice': Man set free after 28 years in prison for crime he didn't commit now adjusts to life outside

“It took me a minute to even catch that what he was saying was real,” Cullen said. “I’m gonna be honest: 80 to 90% of the time, it doesn’t pan out. I instantly went into my mode of questioning him, pressing him, so I’m making sure my time wasn’t being wasted. We talked for an hour straight. I knew by the answers that he had for me that I wanted to take the case.”

Now Atchison, too, is a free man, with Tulsa County District Judge Sharon Holmes on July 16 declaring her determination that Atchison — like Scott and Carpenter before him — was actually innocent. She based her decision at least partly on statements from witnesses Cullen and attorney Joe Norwood found and summoned to testify.

Holmes said she believed that Atchison suffered a “fundamental miscarriage of justice” related to his conviction in the Aug. 3, 1990, shooting death of James Lane east of downtown Tulsa.

“I’m looking at 1988 to 1995 specifically in Tulsa County, and I have been for 12 years. Over and over and over, there are facts — and all my investigations are led by facts — there are facts that point toward a knee-jerk reaction to the crack epidemic,” Cullen said, referencing the demographics of those wrongly convicted.

“Mind you, the quote-unquote ‘War on Drugs,’ which gave law enforcement and the Department of Justice et al. keys to the kingdom to perpetrate that war, was 16 years in the making.”

Norwood agreed, saying he believed “there were practices” employed in each case that prioritized obtaining a conviction over finding who was actually responsible.

The Tulsa County District Attorney’s Office has said it will appeal Holmes’ decision.

‘I know the rewards come another way’ than financially

When Cullen started in the private investigator business in 2005, he hadn’t been at work as a defense attorney long enough to cultivate a broad network of contacts or colleagues.

“My father (Clay Cullen, a former police detective) and I did a ton of research on what was available to individuals who were convicted. And it was very slim,” Cullen said of his beginnings. “The Innocence Project was doing great work, but there was nothing locally that I could find. The nearest one was Kansas City, and they were just getting off the ground. So I decided at that point that I might want to start my own project.

“But that was kind of naive, being only a year or two out and having no money. Really, the timing with society wasn’t even right in ’05 or ’06, in my opinion.”

So Cullen created a pamphlet and mailed it to all the men’s prisons in Oklahoma. He said those who are incarcerated spend a lot of time writing letters without receiving a reply and that they often had little to no awareness of organizations focused on proving innocence after a conviction.

“I figured word would get around, and it did,” he said. “I spent a lot of time vetting letters. I had just enough experience in the criminal justice realm to kind of be able to tell what a good case was and what wasn’t.”

Then a letter from Scott arrived in the mail, followed by Carpenter’s about a week later. What would follow was 10 years of pro bono work on their case and their eventual exoneration and release, also in Holmes’ courtroom, after another person confessed to the crime before being executed in an unrelated murder case.

“I knew they were co-defendants. I thought, ‘Did they sit down next to each other and write this?’” Cullen said of Carpenter and Scott. “And then I learned that wouldn’t be possible because they went to prison as co-defendants and they can never be in the same prison. And that really spurred me on. So that’s what got me into it.”

Once Scott’s and Carpenter’s case concluded, Cullen began looking into Atchison’s murder conviction. Colbert, a friend of Atchison’s, told the Tulsa World previously that he told Cullen about Atchison during one of Scott and Carpenter’s court appearances.

“I knew that if he could have someone to listen to his story, he would be able to come home. All he needed was someone to hear his story,” Colbert said at the time.

Today, Eric Cullen has his company, Cullen and Associates, and a nonprofit organization called Another Chance Justice Project. He also uses the expertise of those he’s helped exonerate to work on other potential cases across Oklahoma and northwestern Arkansas.

Women who are incarcerated received information in a letter sent out last year about Another Chance Justice Project, which focuses on clemency requests and innocence cases.

Murphy, the first female exoneree in Oklahoma, and Carpenter have seats on the group’s board of advisers, along with music executives Jason Flom and Paul Morris.

When asked about the challenges of working with people who often can’t afford to pay a lawyer or investigator, Cullen said, “I just do it, and I know the rewards come another way” than financially.

He recently helped set up an online fundraiser with the hopes of crowdfunding a pickup truck for Atchison, who on Thursday was expected to obtain an Oklahoma ID so he can begin applying for jobs.

‘At the end of the day, you can’t dispute facts’

Cullen said Atchison’s case took place during a time of national unrest and coincided with what he called “the beginning of the gang epidemic.” He noted that the jury in Atchison’s trial before then-District Judge Clifford Hopper, who has since died, was allowed to hear testimony about gangs in Tulsa despite what he and Norwood said was a lack of evidence proving Lane was killed because of a gang conflict.

“I think it gave the public a lot of fear,” Cullen said of the national climate. “I think that’s what motivated this department (Tulsa) to ‘take it to ’em,’ so to speak. Those aren’t my words. I believe several times leaders in the local law enforcement community stated that to the press at the time.”

Norwood told the World that authorities leaned on information about gangs, as well as statements from a teenage witness who later recanted his identification of Atchison, to obtain a conviction. He said six people have said someone besides Atchison was responsible for Lane’s death.

“I knew that Corey was probably getting out at some point after I spent several months looking into the case,” Norwood said. “I had kind of accepted that reality, and maybe that’s part of what you do to get the case done. It wasn’t a huge overwhelming thing because I had already seen it for a while in my own mind.”

Statistics from the National Registry of Exonerations indicate that black people have been seven times more likely to be wrongly convicted of murder than white people and comprise nearly half of all known exonerations in the U.S. Black exonerees, according to the registry, spend three years more in prison before their releases on average than white exonerees.

Cullen, a lifelong Tulsan, said he’s pleased to see the conversation around the issue of wrongful convictions change over the years, particularly with regard to racial disparity of those incarcerated. He said courts initially had little interest in hearing post-conviction relief cases, but he said awareness has grown exponentially, which has made more attorneys become motivated to work on them.

Cullen said he’s even seen conviction integrity units pop up in places such as Philadelphia and hopes Tulsa County will one day consider a similar concept, at least for cases from 1988 to 1995.

“There’s arguments on how to (address wrongful convictions), but at the end of the day, you can’t dispute facts,” he said.

Corey Atchison and attorneys react after he was released from custody, where he spent 28 years serving time on a wrongful murder conviction

Read the story: Man set free after 28 years in prison for crime he didn't commit now adjusts to life outside