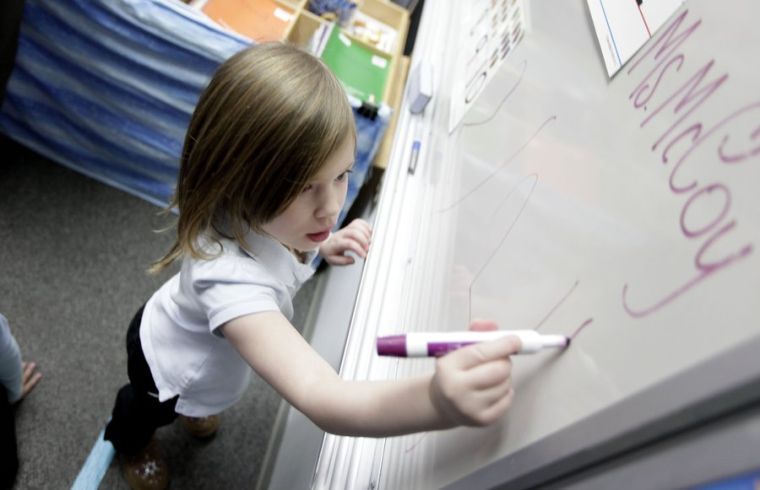 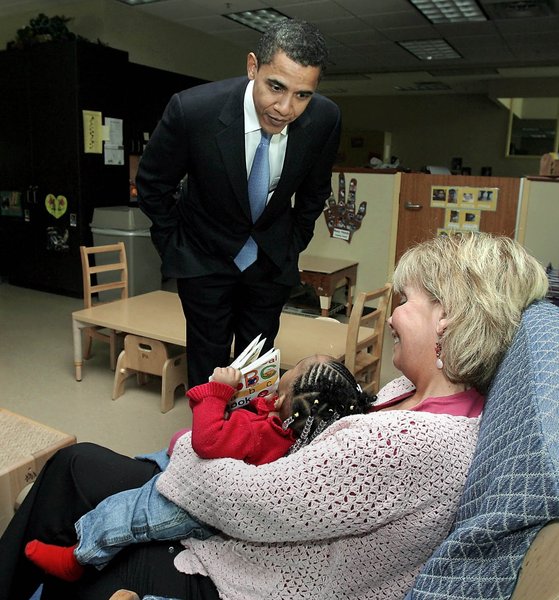 Then-presidential hopeful Barack Obama says hello to teacher Mary Sue Collins as she holds a toddler she is trying to get to nap during Obama's visit to Educare in Tulsa in 2007. MICHAEL WYKE / Tulsa World file 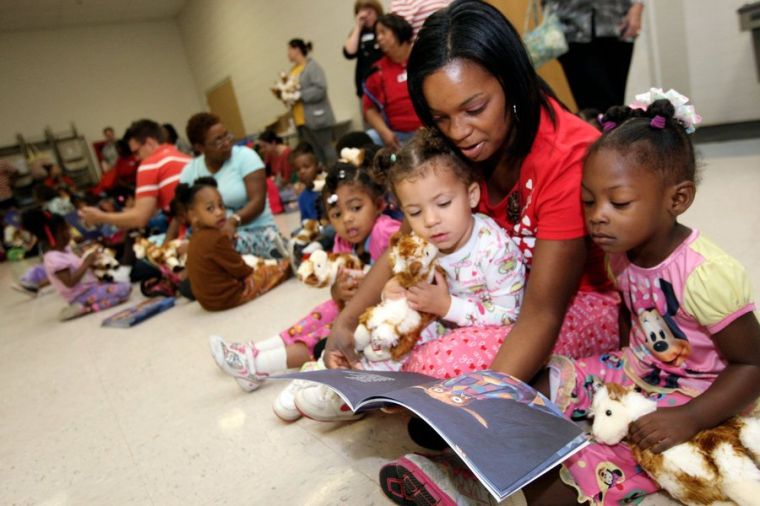 Then-presidential hopeful Barack Obama says hello to teacher Mary Sue Collins as she holds a toddler she is trying to get to nap during Obama's visit to Educare in Tulsa in 2007. MICHAEL WYKE / Tulsa World file

From the Wall Street Journal to comedian Jon Stewart's ''Daily Show,'' national attention is on early childhood education, and Tulsa is ground zero.

President Barack Obama has proposed sending more federal money to states to create or bolster preschool programs. He mentioned Oklahoma in the State of the Union address for having one of the best.

For nearly two months, local early education teachers, advocates and researchers have been answering national calls about Tulsa's role in this evolution.

"We love the national attention for the opportunity for all of us to know the value of an early childhood education and invite people in," said Andy McKenzie, Tulsa Public Schools assistant superintendent for early childhood services.

For the past 15 years, Tulsa has built an early learning system with innovative designs and ongoing social science research.

This has been a monumental turnabout.

In the mid-'90s, the city nearly lost its Head Start grant and access to a public pre-K class was almost nonexistent.

Now, Tulsa's Head Start is considered a national model. The TPS pre-K classes are full and part of a scientific Georgetown University study.

"The Oklahoma experience shows a community has to view early education as part of a broader learning system,'' said Steven Dow, executive director of the Community Action Project, which administers the Tulsa Head Start grant.

"We had to think about all the players who touch the lives of young children and how those different actors function as a system. When you look at what we've accomplished for the last decade or so, we are functioning as a much more cohesive group with Head Start, child-care providers and public schools working together."

Tulsa was at "high risk" of losing its Head Start program after financial and management problems were found by federal regulators.

The Tulsa Community Action Agency, which administered the program, voluntarily relinquished its programs and disbanded in August 1997 after a year of board in-fighting and turmoil.

Among problems were outstanding debt, ignored federal mandates regarding personnel, a disjointed payroll system and no job descriptions.

The city took over administration of Head Start until the newly formed Community Action Project of Tulsa County was chosen to assume responsibility in 1998.

The group merged with Project Get Together, which was headed by Dow. He has led the Community Action Project ever since.

Under Dow's leadership, Head Start transformed to boast of partnerships once seemingly impossible to form.

He said the expectations of Head Start to curb poverty extends beyond the federal government's capability and requires local and state collaboration.

That is at the heart of Obama's proposal for federal-state partnerships.

"The funding they are providing is way short of what it requires to achieve high quality outcomes in each area you are trying to work in," Dow said.

"We start from the standpoint of what outcomes we want to achieve and what will it take to accomplish that for kids and parents. We then build the system and funding supports to deliver it all."

The nonprofit led the way for crafting agreements with public school districts and building early education centers next to elementary schools. There now are centers with Tulsa, Union and Sand Springs schools.

There are systems of data collection and program evaluations. Standards are set higher than the federal minimums.

For example, changes in Head Start include having at least 50 percent of its teachers with a bachelor's degree by the end of the year.

For several years now, Tulsa's Head Start requires all teachers to have a bachelor's degree and are paid the same as public school pre-K teachers.

"If we tried to manage Head Start on federal dollars alone, we would not be able to pay our teachers commensurate with the school systems," Dow said. "We set the bar to make sure all kids in Head Start are being educated by highly qualified teachers. That's not the norm across the country in Head Start."

Because of the agreements, classrooms in early learning centers are blended, meaning it is a mix of Head Start and public pre-K students.

"The basic issue of this being important in the education of young kids in a very intentional way goes across those social and economic lines," he said.

"What works for middle- and moderate-income kids and low-income kids are the same kinds of supportive and care giving teaching that goes on. What it looks like doesn't differ depending on the demographics."

Tulsa Public Schools started implementing full-day pre-K programs in 2000. In some schools, classrooms were full within hours on sign-up days.

Now, all but four schools have a voluntary full-day pre-K program.

In 2004, researchers from Georgetown University, led by William Gormley, began a long-term study of the program.

Results from the project are routinely included in national discussions and forums on early childhood programs.

The latest analysis found significant improvements for students with parents speaking Spanish at home, with gains ranging from four months in writing and 12 months in reading.

"These are extremely impressive results from a 9-month pre-K program," Gormley said.

He said long-term measures are important, noting an early group once showed no persistent effects from being in pre-K.

"More recently, though, we are seeing that positive effects persist for boys through at least third grade," Gormley said. "This is really good news because boys struggle academically more than girls these days."

An examination of social-emotional skills found students who went to TPS pre-K were more attentive and less timid than their peers, Gormley said.

"If these attributes persist, they are likely to propel students in a good direction and not just academically," Gormley said. "Soft skills like grit and curiosity are harder to measure but very important."

The pre-K programs are not meant to provide the same types of parental outreach and family supports as Head Start or some other anti-poverty programs.

"On the other hand, it recognizes that education is of fundamental importance in a changing global economy, Gormley said.

"Tomorrow's workers will need a strong education more than ever. By helping young children to hit the ground running when they enter school, the Tulsa pre-K program is giving them a big boost toward future success."

Tulsa is the only city to have three Educare centers, which serve to intervene in poverty through a comprehensive early childhood and family programs.

The centers have partnerships, similar to Tulsa's Head Start, to provide education and job training to parents, and health care is also provided.

The first center was launched in 2004 next to Kendall-Whittier Elementary and the third was opened last year near Hale Junior High.

"Tulsa has done a good job compared to many places in the country, where there is still separation between segments of the system."

Horm is leading research in the outcome of the Tulsa Educare centers and has studied the impact of the state pilot program for early learning, now called the Oklahoma Early Childhood Program.

Data show children entering Educare as infants and toddlers are found to be at the level of school readiness and social-emotional development as their peers by kindergarten.

When a child enters at 3, gains are found to lessen the gap but not to the point of making it even.

The center is also finding more parents finishing job training and higher education to lift them of welfare benefits.

"Research is showing that investing in early childhood has immediate and long-term payback, which may not be restricted solely to measures of math and reading scores," Horm said. "The long-term things are an adult's ability for good judgment and contributing to our economy."

Horm said funding for education has been lopsided for decades, paying the most in higher education and the least for babies.

"It's time for us to re-examine our policies and funding based on research rather than based on history," Horm said.

Though Horm's research is based on the impact of low-income family programs, the lessons can be transported to other child-care providers and stay-at-home parents.

"Social and emotional is the basis you want in a relationship with a child that is supportive and with a use of positive discipline approaches," Horm said. "Children need changes to learn from their advance and failures."

While Tulsa is leading the way for quality care aimed at low-income families, it's not enough.

"There are still children who are not receiving services," Horm said.

One of the most significant challenges facing Oklahoma is a shortage of early educators at each step - for classroom through college instructors, Horm said.