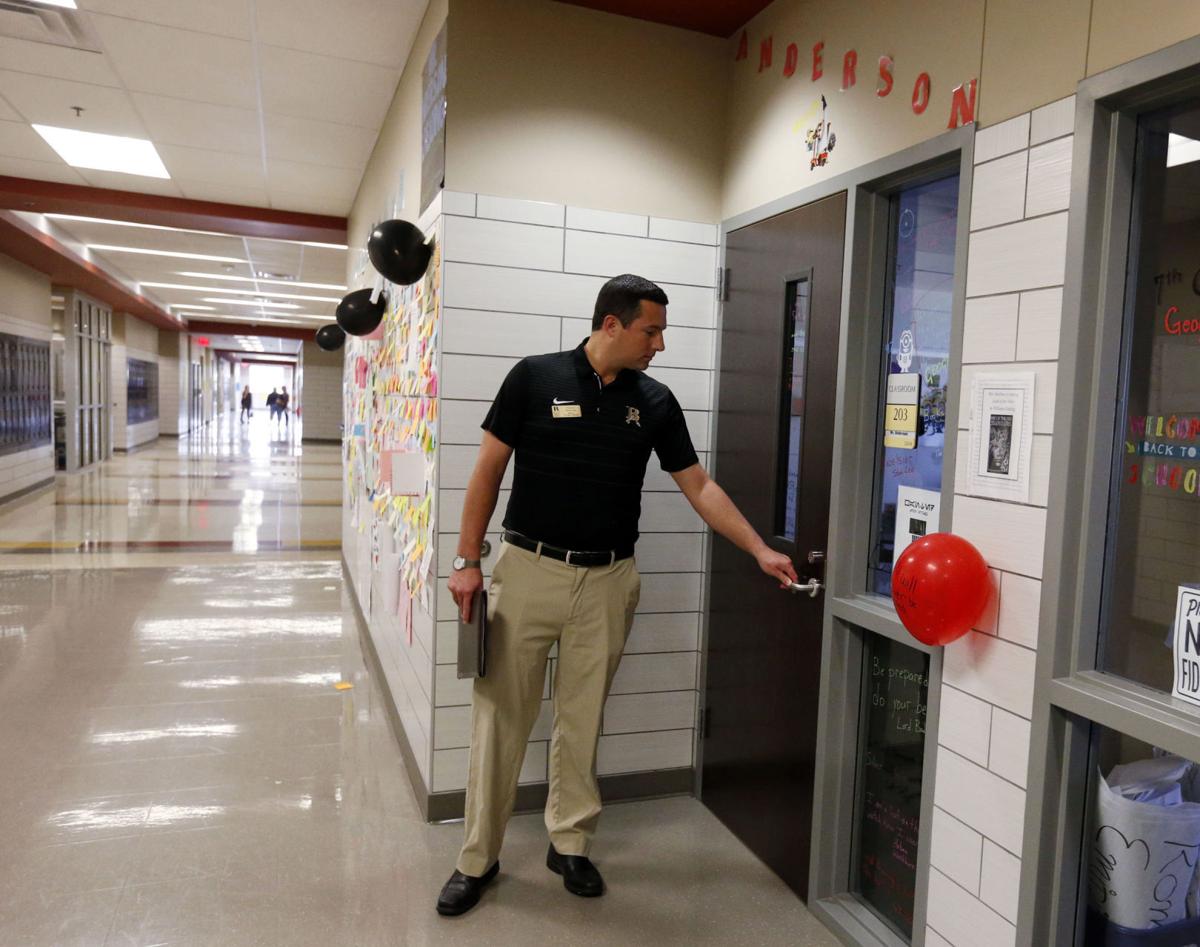 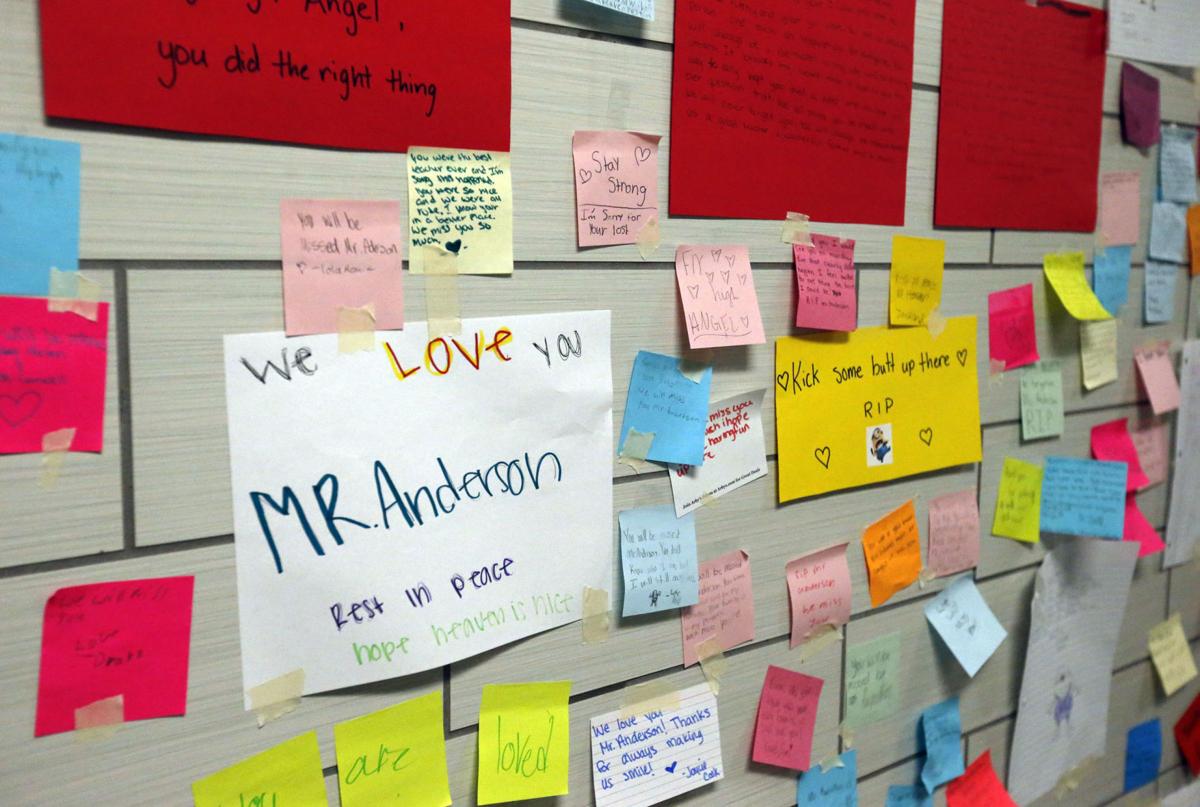 Notes and cards are left at Shane Anderson’s Oneta Ridge Middle School classroom after he was killed during a robbery at his home this weekend. STEPHEN PINGRY/Tulsa World 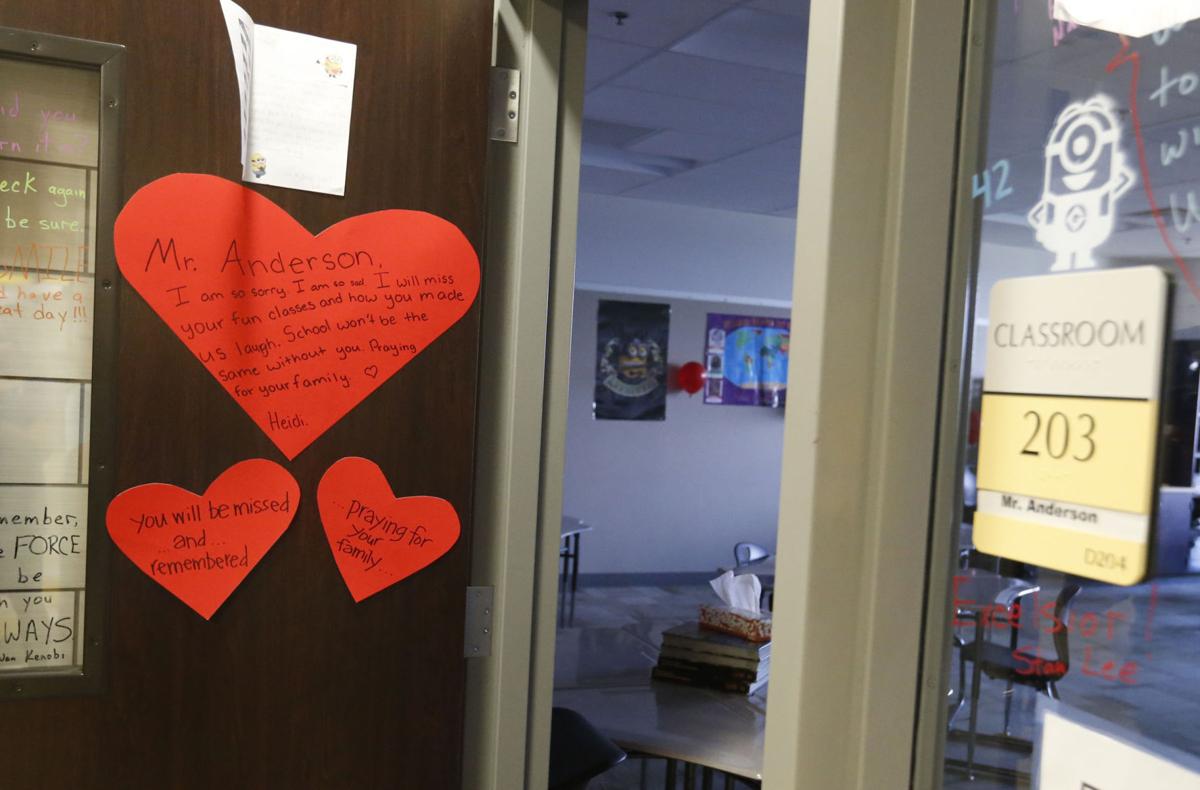 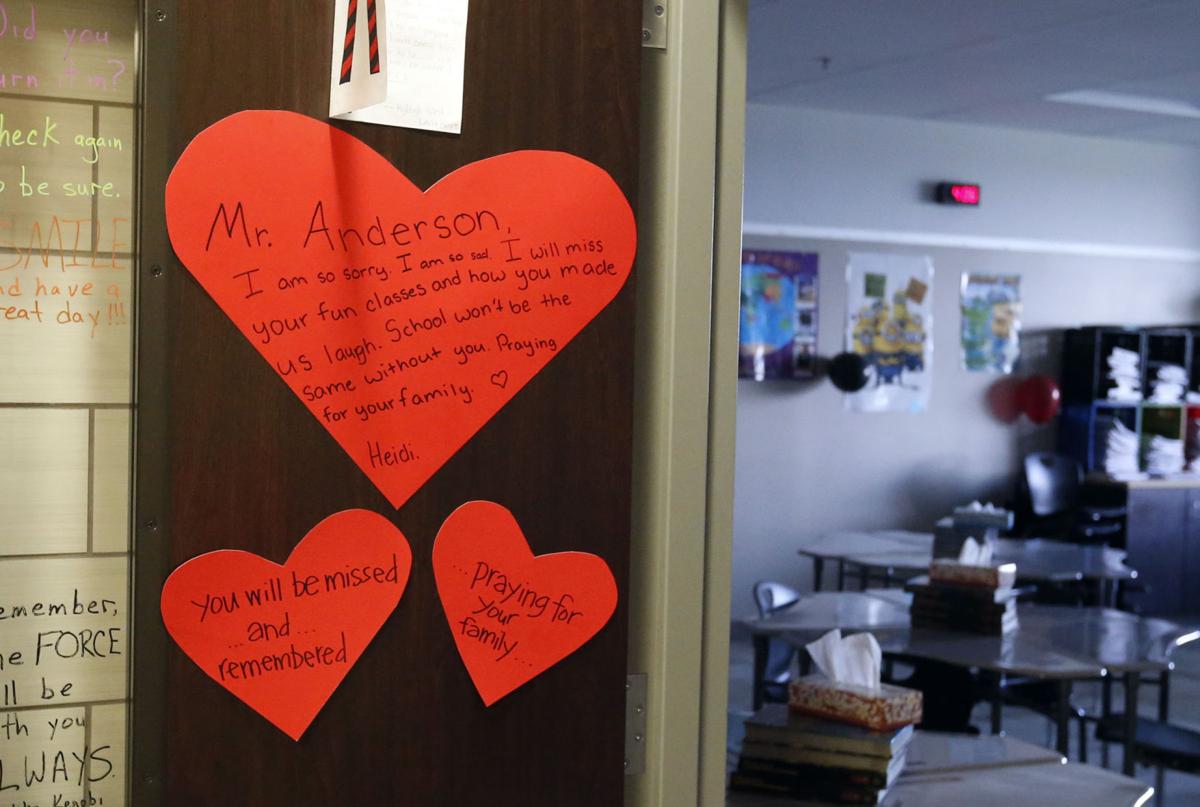 Notes and cards are left at Shane Anderson’s Oneta Ridge Middle School classroom after he was killed during a robbery at his home this weekend. STEPHEN PINGRY/Tulsa World

Ginnie Graham: Pileup of tragedies makes this a time for empathy, discussing the hard topics

A shelf behind the seventh-grade geography teacher’s desk bears more than a dozen figurines — memorabilia from the “Star Wars” films and children’s movie franchise “Despicable Me.”

On Monday, the desk — and the area around it — looked just as Anderson had left it, save for a red balloon taped to the wall 6 inches from the Darth Vader Mr. Potato Head.

“You are awesome,” it read.

Several other balloons hung across the classroom, close to the windows that bore messages scrawled in marker and near the whiteboard filled with more tributes to Anderson. Some were strung together in sentences. Others had uncertain spellings.

All of them bid “Mr. Geo Dude” — as the whiteboard dubbed Anderson — goodbye.

Police said Anderson died Sunday defending his family from a would-be robber at their home in Tulsa. His death sent a Broken Arrow community already reeling from the death of high school student Jaymeson West on Friday night deeper into mourning.

West, a Broken Arrow junior, was once a student at Oneta Ridge. Anderson has taught in Broken Arrow since 2013. Their deaths left the tight-knit school district and middle school searching for answers Monday.

“We have been telling our students and staff to reach out if they are struggling and to look out for others who may be, as well. Asking for help is a sign of strength and bravery, not of weakness,” district spokesman Charlie Hannema said in a statement. “We are Broken Arrow, and we will get through this together.”

The Oneta Ridge principal remembered both Anderson and West on Monday.

“(Anderson) was a quiet person to a lot of people that knew him, but when he got in his classroom and started talking about geography, he came alive,” Principal Mickey Replogle told a group of reporters Monday afternoon.

“They already miss him,” said Replogle. As he spoke, red-eyed staff walked by, leaving the near-empty school on a day colored by tragedy.

Replogle described West as “a very pleasant, joyful student while he was here.”

West, a member of the Broken Arrow Pride marching band, died after falling from the top of the high school stadium after a football game Friday. His father wrote in a Facebook post that his son had long battled depression and jumped to his death.

“In times like these we do not heal. We struggle,” Michael West wrote, “We breathe until we can do so without weeping. We wait for all the beauty and laughter that Jaymeson brought into this world to overpower the ugliness of his last moments.”

Pride officials addressed West’s death on the band’s Facebook page: “While we continue to grieve with Jaymeson West’s family, the Broken Arrow Band students have come together to support each other and bond our band family even more closely together. … The power of music to express ourselves in times of sorrow will also help heal our broken hearts. Music and the arts are powerful mediums for us to express our humanity, our sadness and help our band to always remember the beautiful person that Jaymeson was.”

The post added that band rehearsals would continue as planned Monday and that counselors would be available as long as needed.

Someone wrote a memorial on Anderson’s whiteboard that said “Jaymeson died needing a hero. Mr. A died being one.”

A statement that went out to parents after the deaths said the district would have additional counselors and mental health resources at all school sites.

“The district is also partnering with Mental Health Association Oklahoma, private mental health associations and surrounding districts in an effort to provide guidance to our counselors and staff members in addressing this tragedy and overall student mental health,” the statement from Broken Arrow High School Principal Liz Burns said.

Outside Anderson’s classroom, a kaleidoscope’s worth of colorful sticky notes adorned the wall. Some wrote letters on construction paper, praising Anderson’s friendship and his actions.

And, by the door of Room 203, a drawing on notebook paper showed a cartoon Minion, its one eye closed and a halo hovering over its head.

It said, like so many of the others did, “Fly High, Mr. Anderson.”

Tim Stanley contributed to this story.

A service for Jaymeson West has been set for 2 p.m. Wednesday at the Broken Arrow Performing Arts Center. A visitation will also be held 6-8 p.m. Tuesday at St. Anne’s Catholic Church.

Services for Anderson are pending. He leaves behind a wife and three children.

A family friend of the Andersons has set up an online fundraising campaign that has already raised about $5,000. Those who want to contribute can go to bit.ly/andersongofundme.

Tulsa police arrested Deonte Green on accusations he committed several felonies, including kidnapping and robbery, leading up to a homicide in a south Tulsa neighborhood.