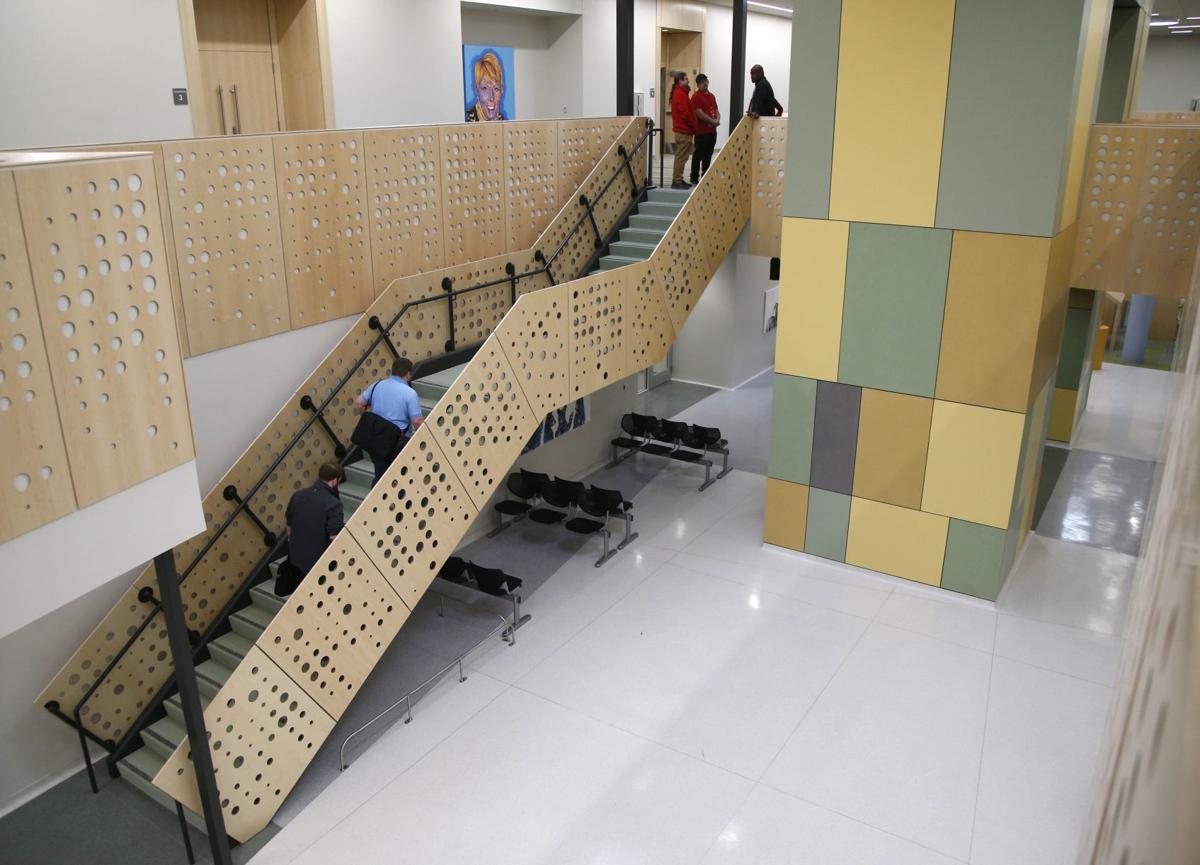 A staircase leads from the lobby to the second floor at the Tulsa County Family Center for Juvenile Justice, 500 W. Archer St., in Tulsa on Monday. MATT BARNARD/Tulsa World 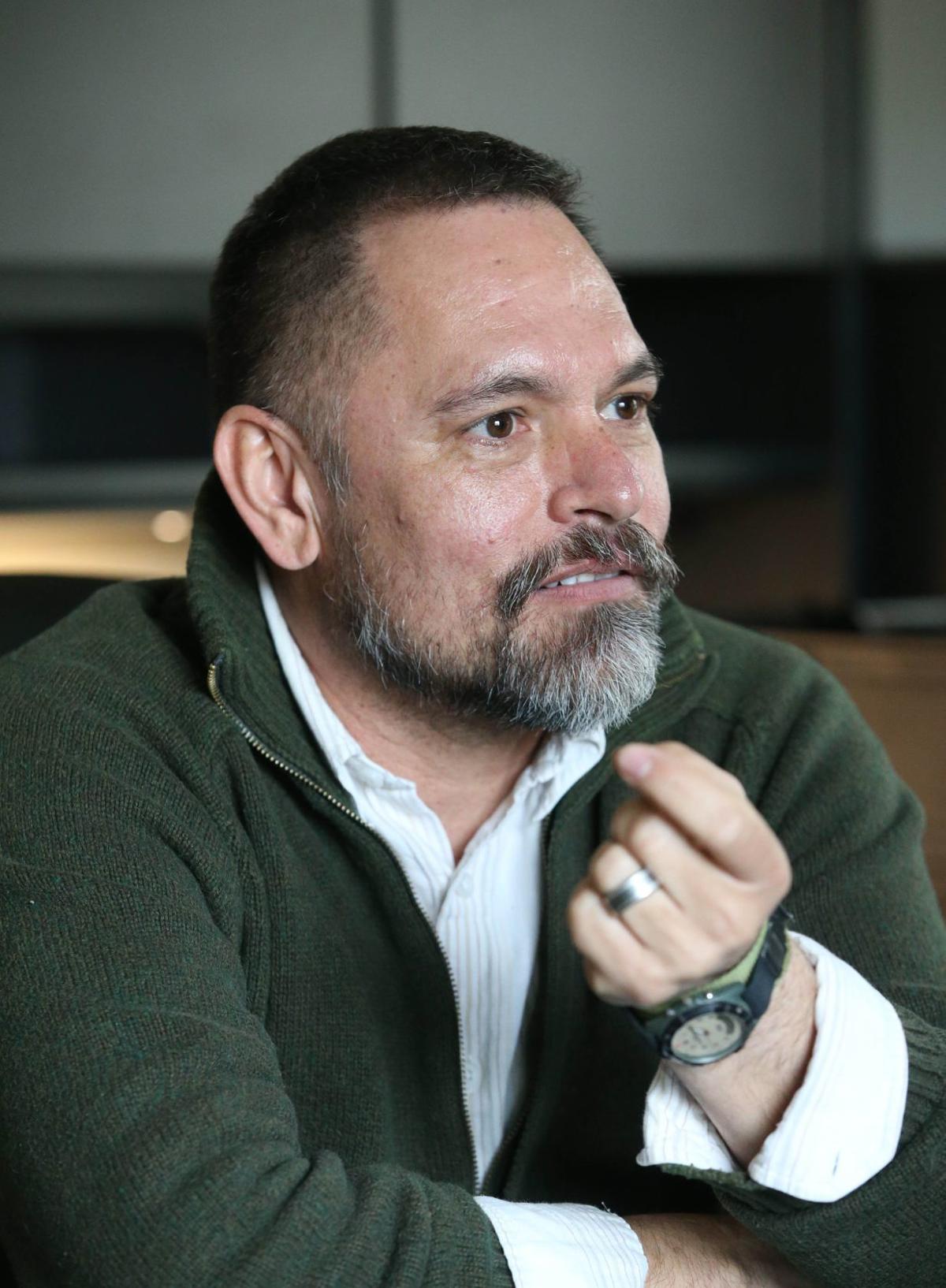 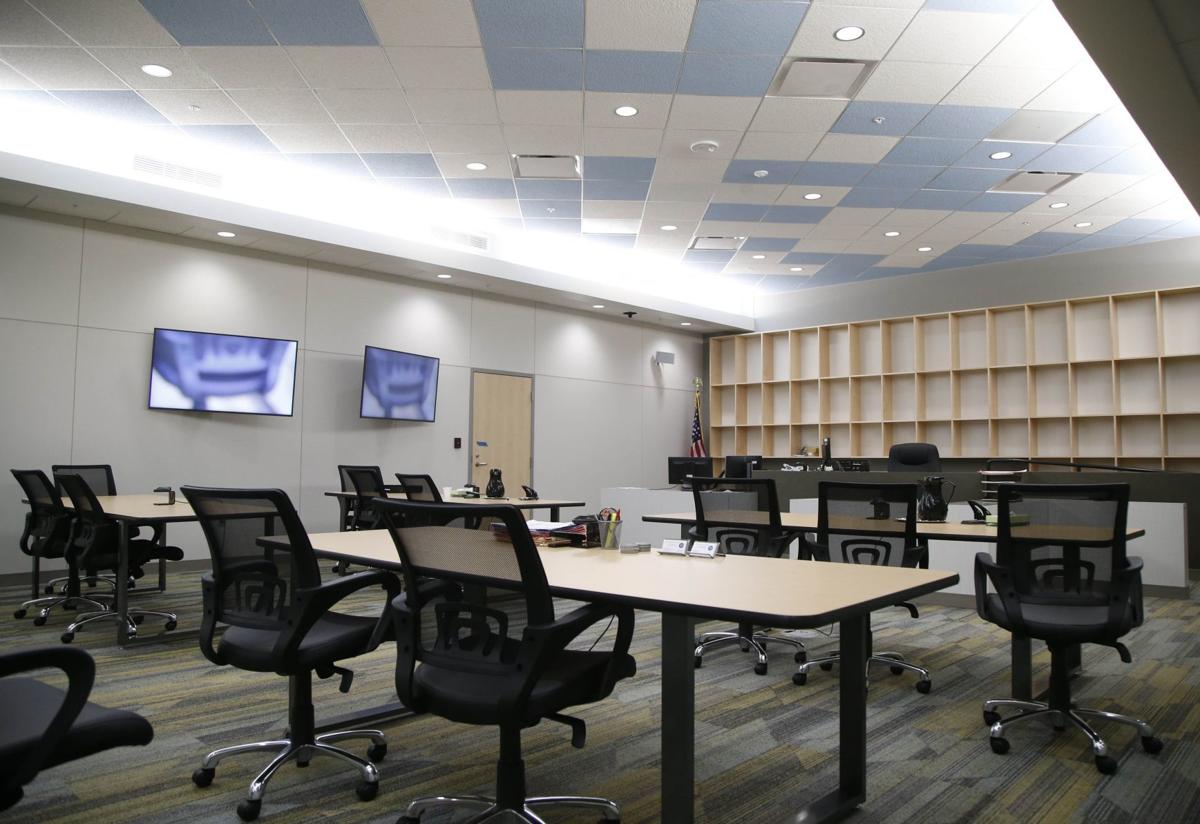 Ceiling tiles designed to evoke a skyscape are part of the decor in a courtroom at the Tulsa County Family Center for Juvenile Justice, 500 W. Archer St., in Tulsa. MATT BARNARD/Tulsa World 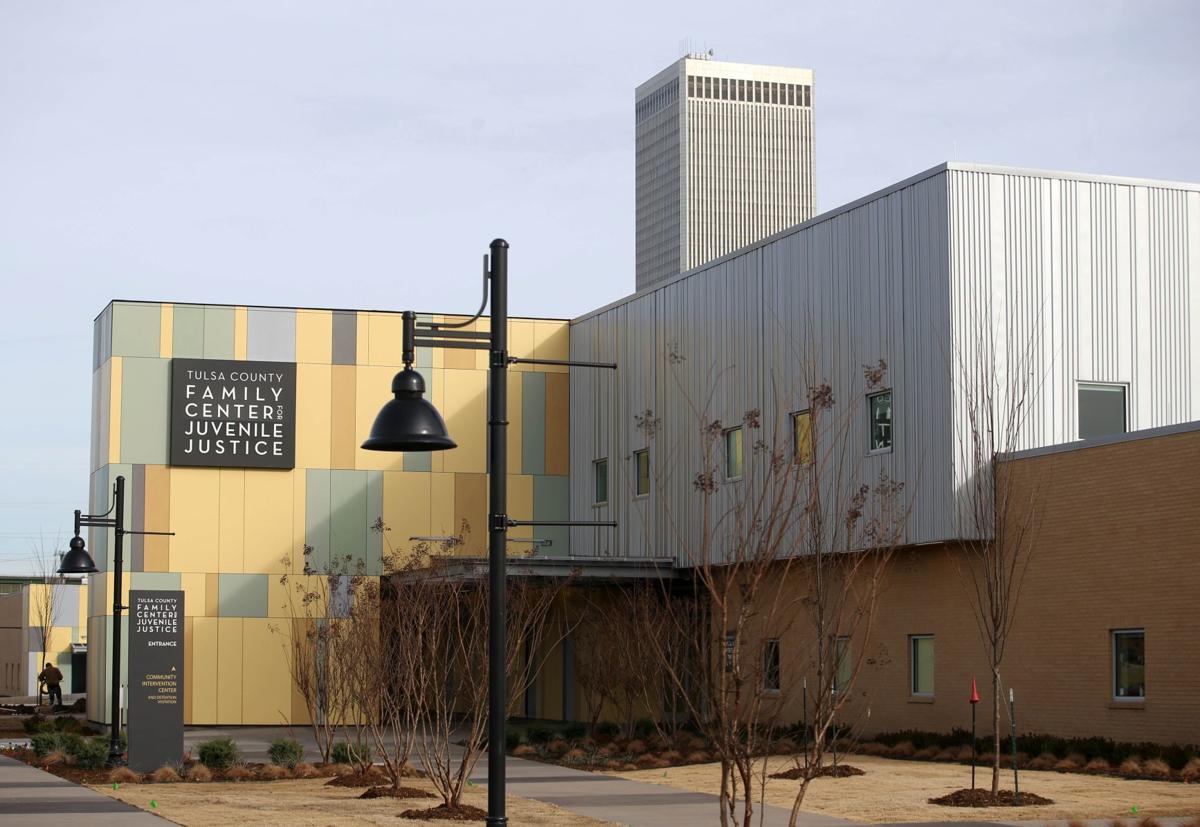 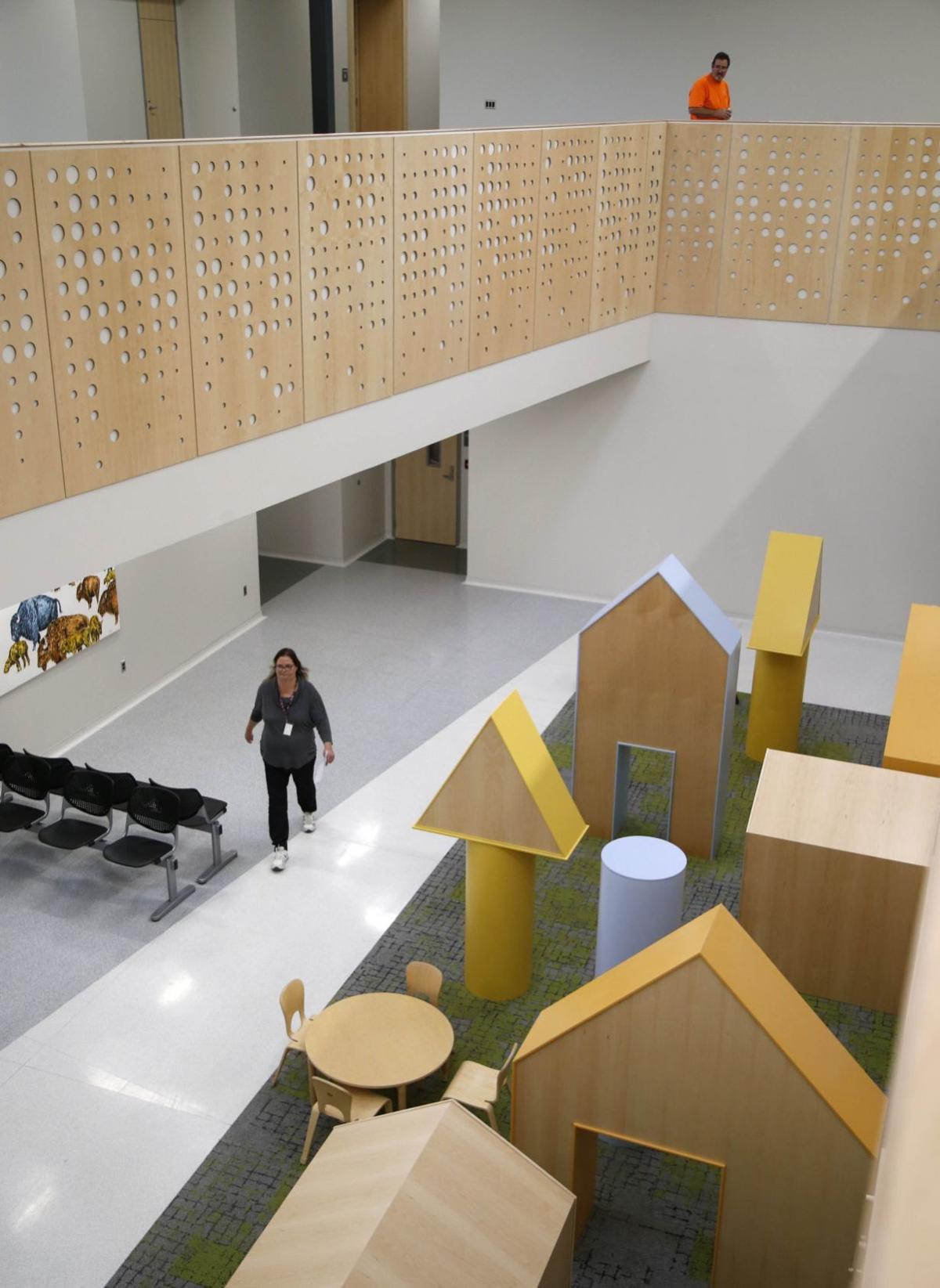 A staircase leads from the lobby to the second floor at the Tulsa County Family Center for Juvenile Justice, 500 W. Archer St., in Tulsa on Monday. MATT BARNARD/Tulsa World

Ceiling tiles designed to evoke a skyscape are part of the decor in a courtroom at the Tulsa County Family Center for Juvenile Justice, 500 W. Archer St., in Tulsa. MATT BARNARD/Tulsa World

Monday was noteworthy for what wasn’t happening in juvenile court.

There were no safety or security challenges from youthful offenders with a history of conflict being squeezed into the same, tight space.

“It was almost hypocritical of us to expect families to come to a place that was so chaotic. This place is almost the exact opposite of the old place — it’s just a complete contradiction,” said Shonn Harrold, court services administrator at Tulsa County Juvenile Bureau. “This is only the first day, but it seems like a much better place already to seek to help families. It’s very hopeful for us as professionals.”

Cases were being heard in courtrooms, and services that support the court, such as the Court Clerk’s Office, were open for business, even as employees unpacked boxes and workers completed paint touch-ups here and there.

In the next few weeks, the public parking lot across the street is set for completion, and juvenile detention will move in.

Cpl. Clarke Hess of the Tulsa County Sheriff’s Office was overseeing first-day security checks at the main entrance because the deputies who work in juvenile court have new duties.

“This facility was designed with security features in mind, so our whole processes have changed. Juvenile court has X-ray machines for the first time — that alone has increased security 10-fold — and we’ve got sally ports for people who are being brought in from the jail,” Hess said. “From what we all came from, it’s night and day.”

Ultimately, the center will house all of the services previously located in three separate facilities — the juvenile courthouse, juvenile probation and the community intake center, where youths are taken upon arrest.

That makes sense for people being served by the juvenile court and the almost 200 people who work there.

“It will be nice when this place is known as THE place for everything,” said Harrold. “It was confusing for families, and the location is pretty convenient for everyone.”

Hayley Garrison, operations administrator at the center, pointed out that a jury trial was underway in one courtroom on Monday afternoon, but you wouldn’t know it unless you were in that courtroom.

At the old juvenile court building west of downtown, there was one, single waiting area that everyone packed into, one tiny room for jurors, employees literally using broom closets as offices and crowded hallways packed with boxes because there was insufficient storage.

“One employee told me she was actually excited to get out of bed and come to work this morning,” Garrison said, with a laugh.

The design of the new center was “trauma-informed,” meaning special considerations were made for the needs of the population being served.

A grand, two-story entryway and main floor waiting area were quiet and spacious, there was a play area for small children and the whole space was flooded with daylight streaming in from a wall of windows at one end.

Walls and finishes throughout the building were white or soothing pastels. And the Hardesty Family Foundation and Tulsa County Bar Foundation commissioned two local artists — John Hammer and Ben Trosper — to create artwork for the public spaces inside.

In the spring, $1 million of landscaping, donated by the Zarrow Families Foundation, will be completed to improve the area around the center, located on the western edge of the Tulsa Arts District.