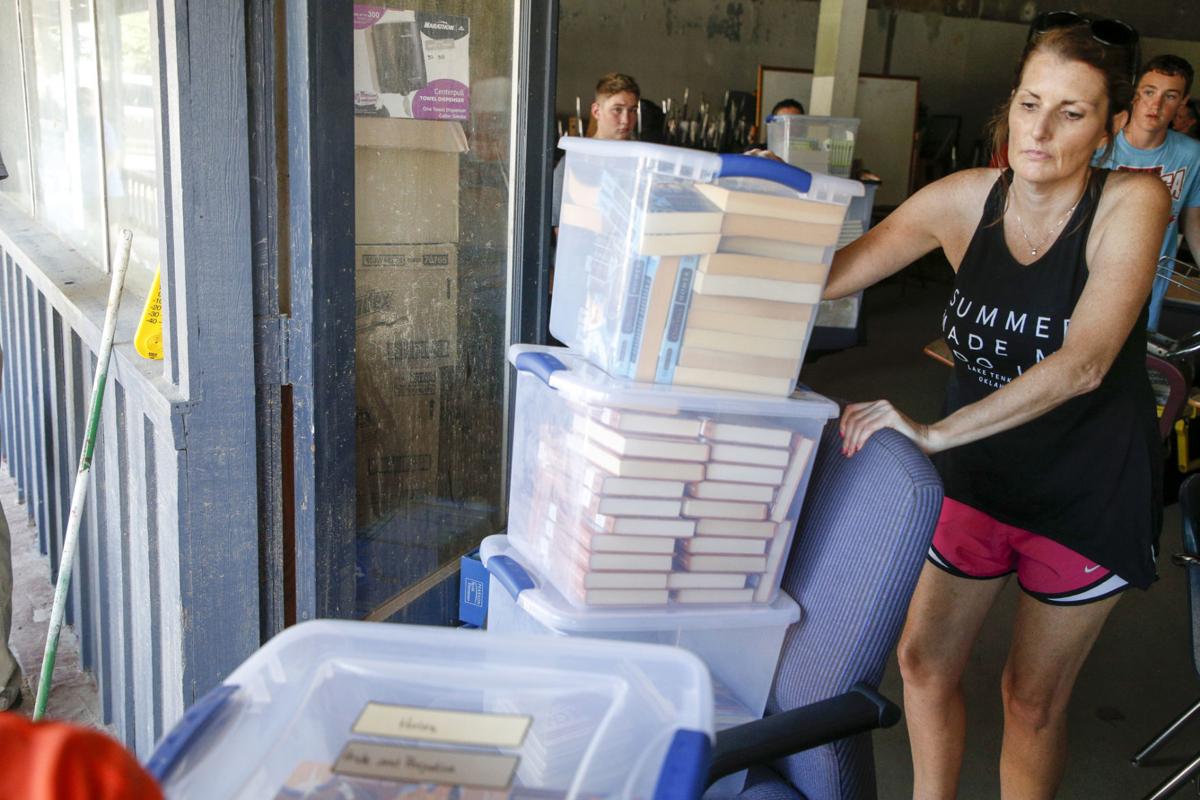 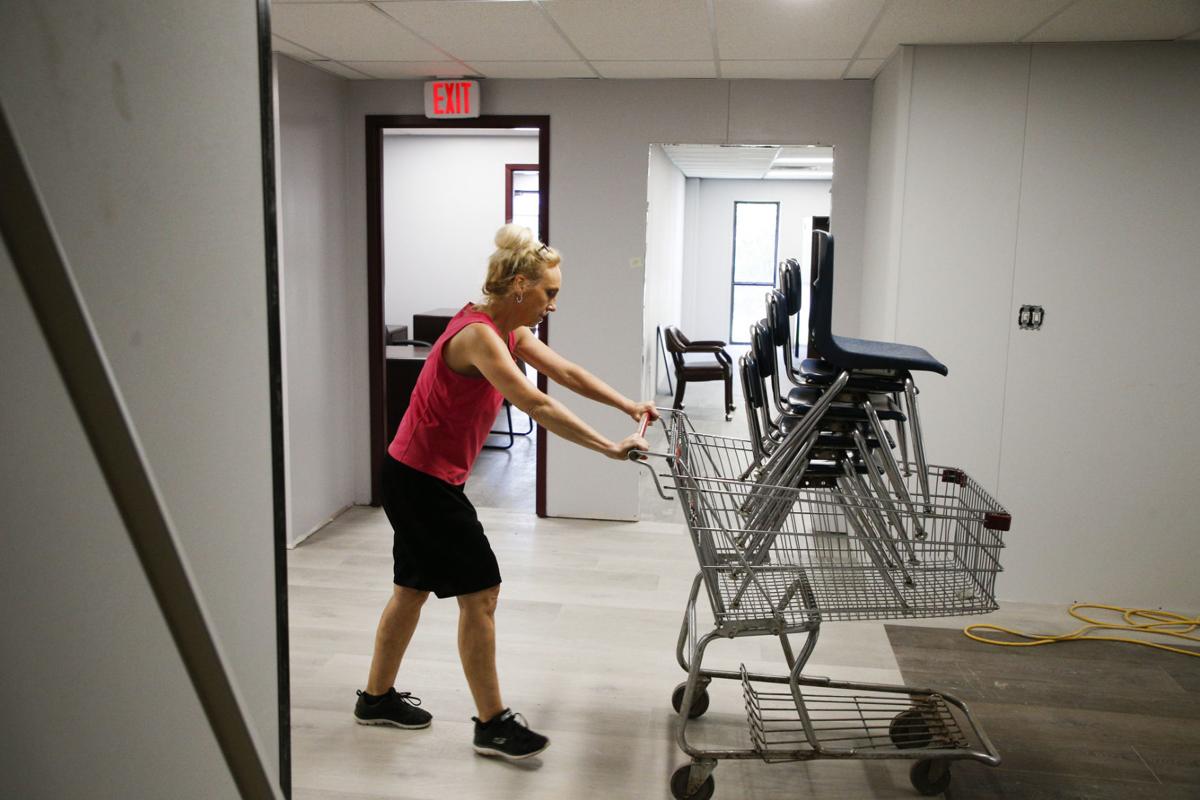 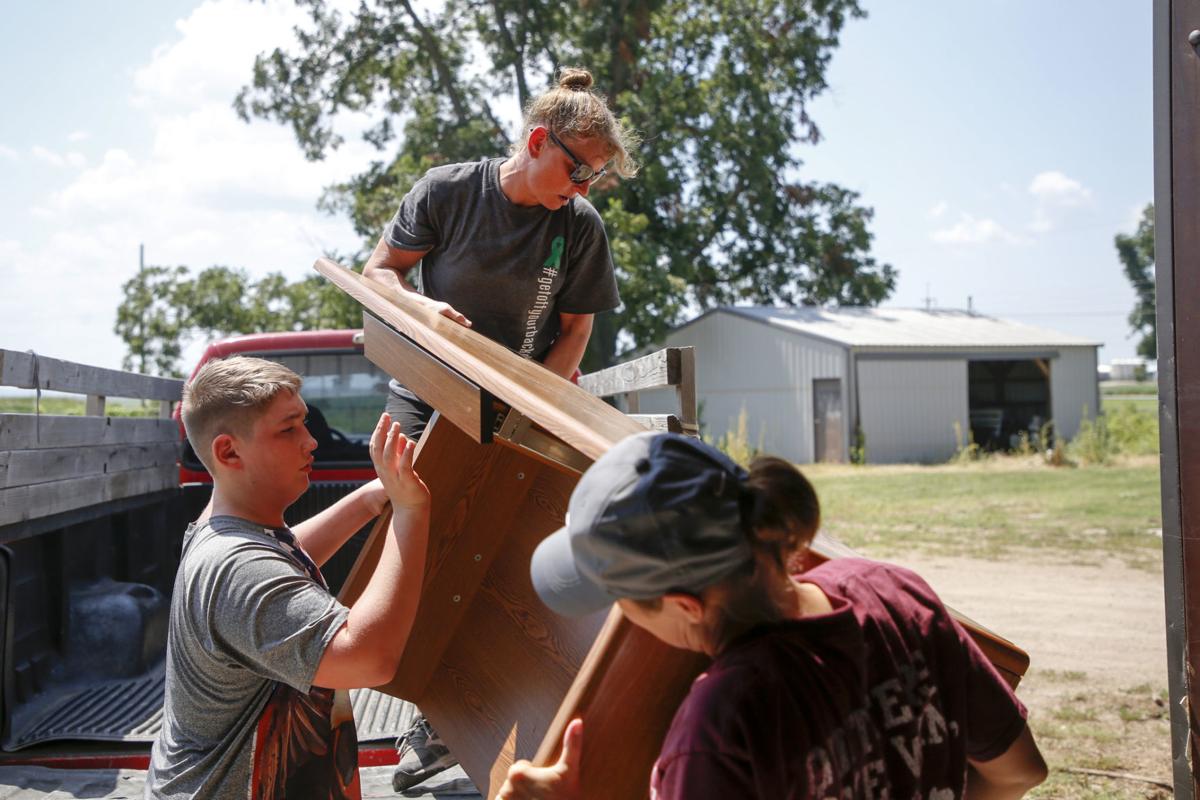 Webbers Falls math teacher Meghan Johnson, 15-year-old student Ayden Potts and school nurse Judy Treadwell load a table into the bed of a truck on Tuesday in preparation for the start of school. IAN MAULE/Tulsa World 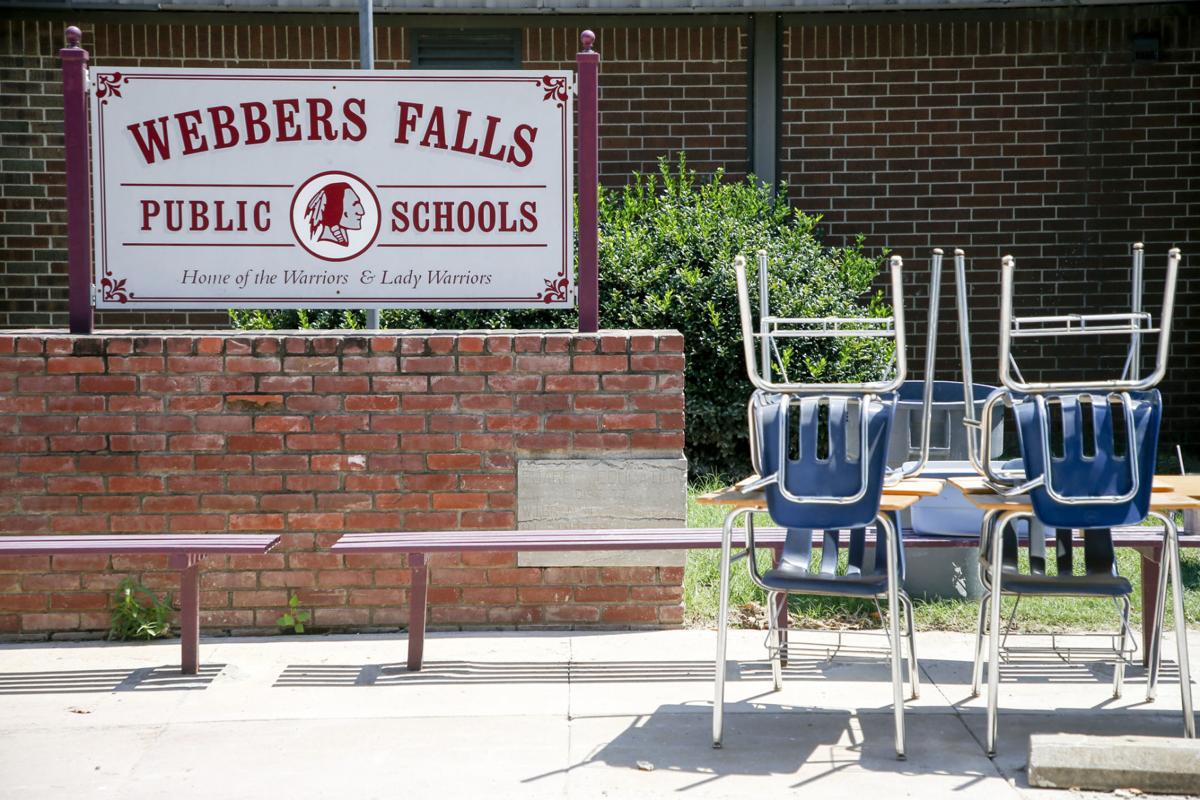 Webbers Falls math teacher Meghan Johnson, 15-year-old student Ayden Potts and school nurse Judy Treadwell load a table into the bed of a truck on Tuesday in preparation for the start of school. IAN MAULE/Tulsa World

WEBBERS FALLS — A sheen of perspiration formed on Dana Crumpler’s skin while she sorted through books in an old, deserted general store.

Full sets of “The Outsiders,” “The Odyssey” and “To Kill a Mockingbird” were among the stacks of classroom resources stored there. Crumpler and Jayme Trennepohl, both English teachers at Webbers Falls Public Schools, looked over the resources they have for teaching after a flood swamped the school — and the town, also causing significant damage to the police station, post office, multiple businesses and about 160 of the town’s approximately 200 houses — in May.

Meanwhile, a trio of students behind the teachers worked out how to move a large desk without scratching it, and their colleagues staked claims on filing cabinets and desks.

“If the school were to go away, I feel like the town would go away, too,” Crumpler said. “Warrior roots run deep.”

The flood was insidious. As the buildings stood in the floodwaters, muck and grime seeped through wood, drywall, insulation, science equipment, kitchen appliances and books. In June, school officials estimated that renovations and repairs would cost up to $3 million.

The upcoming school year for the Webbers Falls Warriors is slated to start Sept. 3.

“Friday we start preenrollment,” Principal Lisa Ward said Tuesday. “We are working against the clock.”

They have until then to “get the place looking like a school again,” she said.

Since the floodwaters receded in late May, the Webbers Falls campus has transitioned from a mess of muck to a gutted shell to interiors that appear distinctly institutional.

The gymnasium floor and every wooden door in the school were torn up and thrown out. Students volunteered to scrape away muck from walls. Heating and air units had to be replaced, and science rooms and kitchens had to be gutted of almost all their equipment.

Teachers and administrators have not yet had a full opportunity to take inventory, but Ward said she knows they will need graphing and scientific calculators.

“That’s why these couple of days, this week, are very crucial to find out what we do and do not have,” she said.

School officials and volunteers have made trips to Krebs, Haileyville, Muskogee and Tulsa to pick up donated supplies. Teachers from Broken Arrow to Weatherford — across the state in western Oklahoma — boxed up what they could for Webbers Falls teachers.

“They’re sharing their own classroom resources and school supplies,” Ward said. “They box them up, and they bring them down here.”

The upcoming school year will be Crumpler’s first year to teach high school English. Before switching to the higher grades, she was teaching middle school students.

Before she and other teachers could put serious work into their classrooms, all of the classroom resources available had to be moved out of storage and into the school. Students, parents, teachers and community volunteers worked throughout Tuesday to move furniture, books, teaching aids and other resources from storage to the school.

Tables, bookshelves, chairs, desks and sets of books were stacked inside classrooms without apparent order.

John Hicks, a Webbers Falls bus driver and special education teacher, said people “pitch in where you can” because of just how small the school is. Last school year, it had 290 students from preschool through 12th grade.

How you can help

Those wishing to volunteer at the school may "just show up" on weekdays leading up to the first day of classes, Sept. 3, Superintendent Dixie Swearingen said. Faculty and staff will work from 8 a.m. to about 3 p.m. to move furniture and resources and to set up classrooms.

Those wishing to donate may contact Principal Lisa Ward at lward@webbersfalls.k12.ok.us with what they can offer or to find out what is needed.