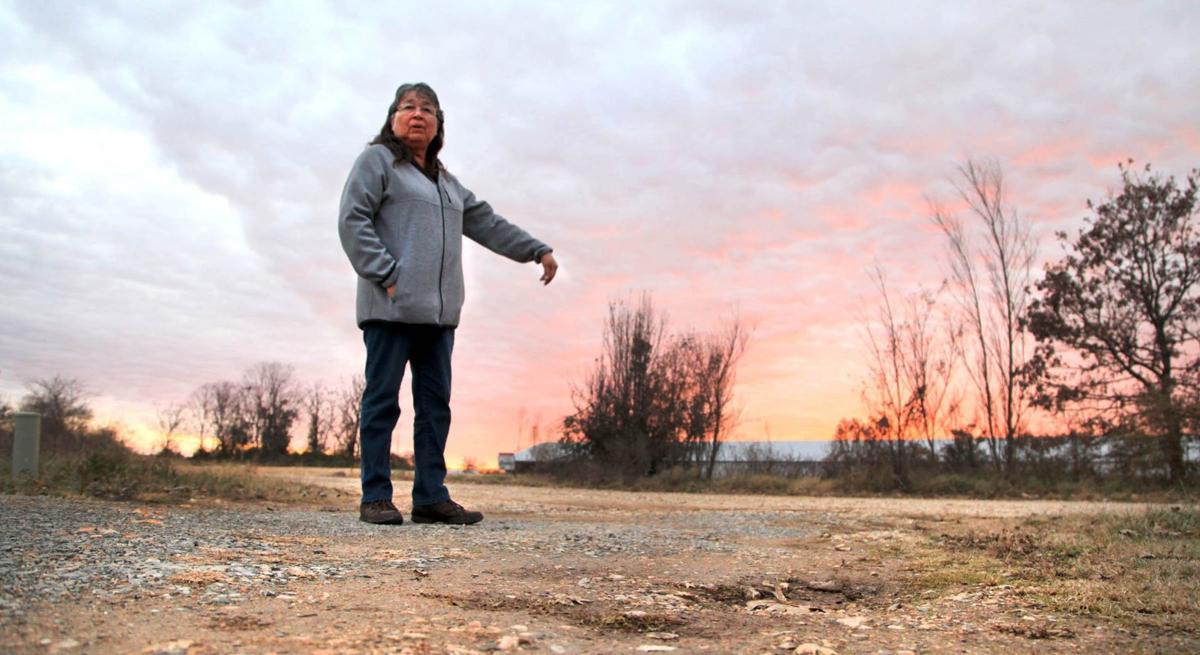 Lou Cochran shows where erosion runoff debris is left in her driveway. She said the runoff is from water flowing across a county road downhill from the neighboring Blossom Farm poultry operation in Delaware County. KELLY BOSTIAN/Tulsa World 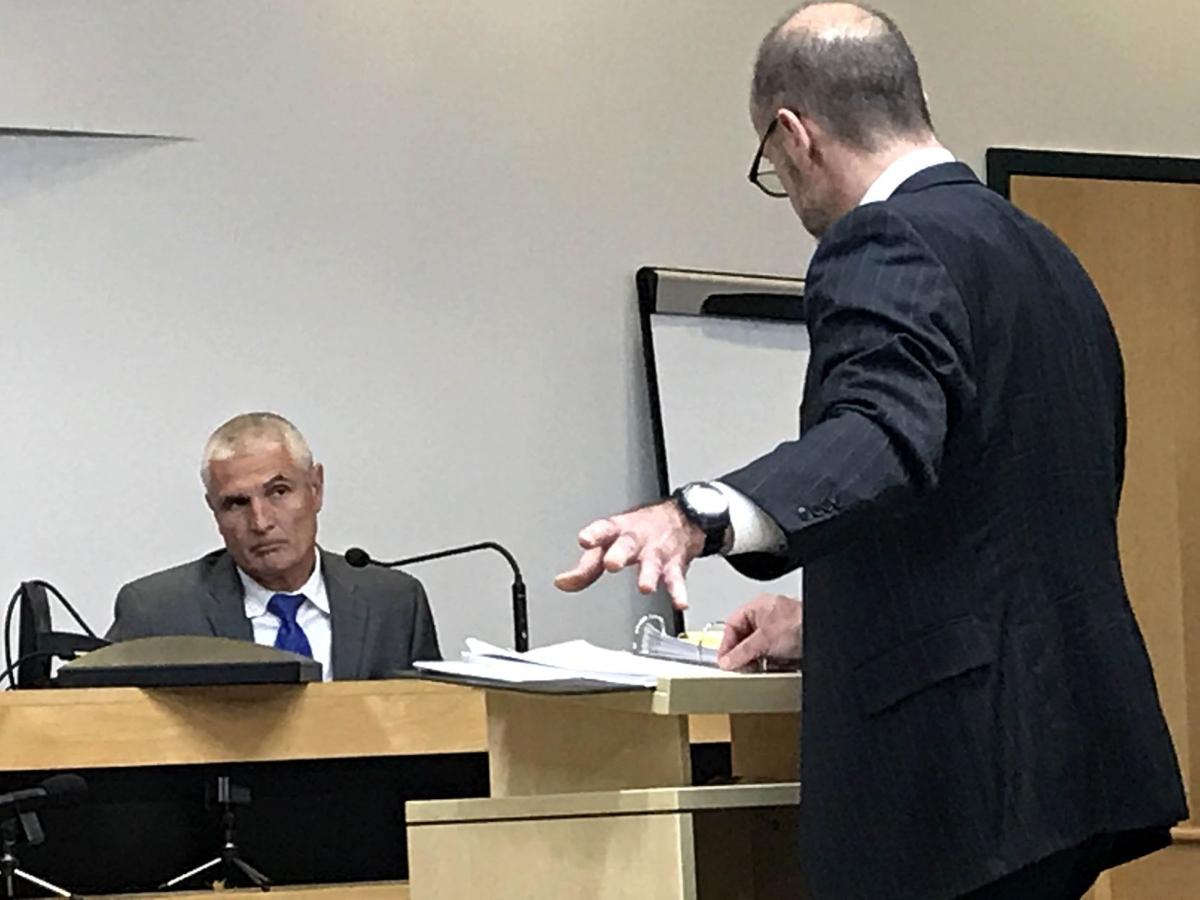 Kent Wilkins, chief of the Oklahoma Water Resources Board planning and management division, responds to questions posed by attorney Jason Aamodt of the Indian and Environmental Law Group at the Delaware County Courthouse on Wednesday. 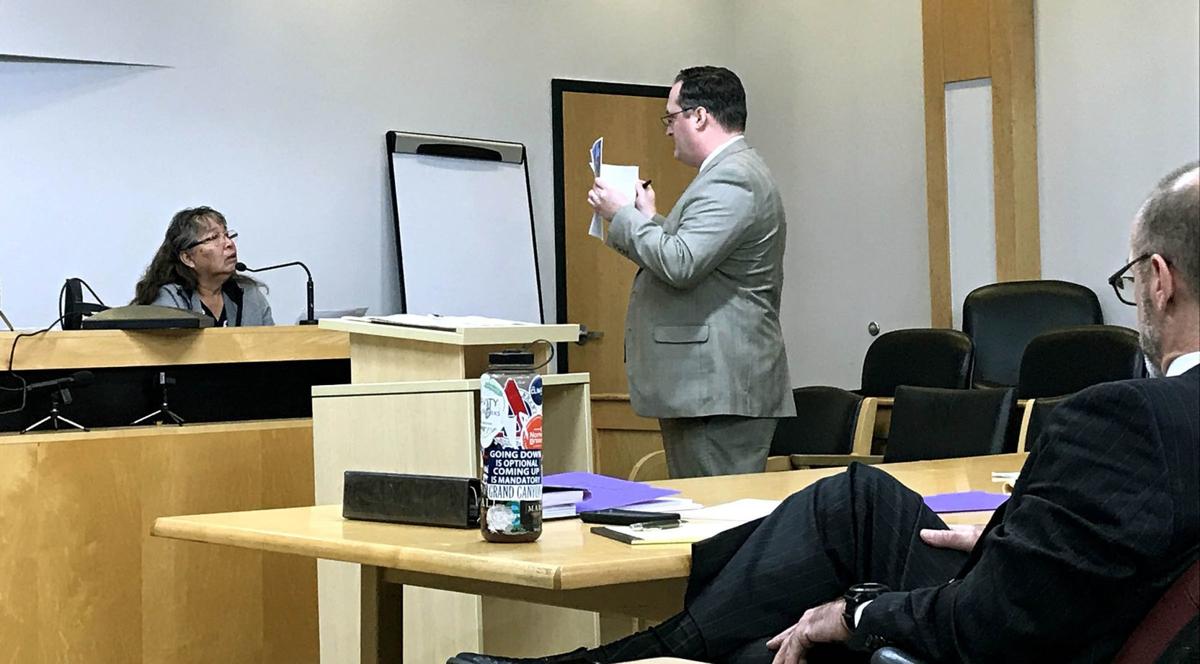 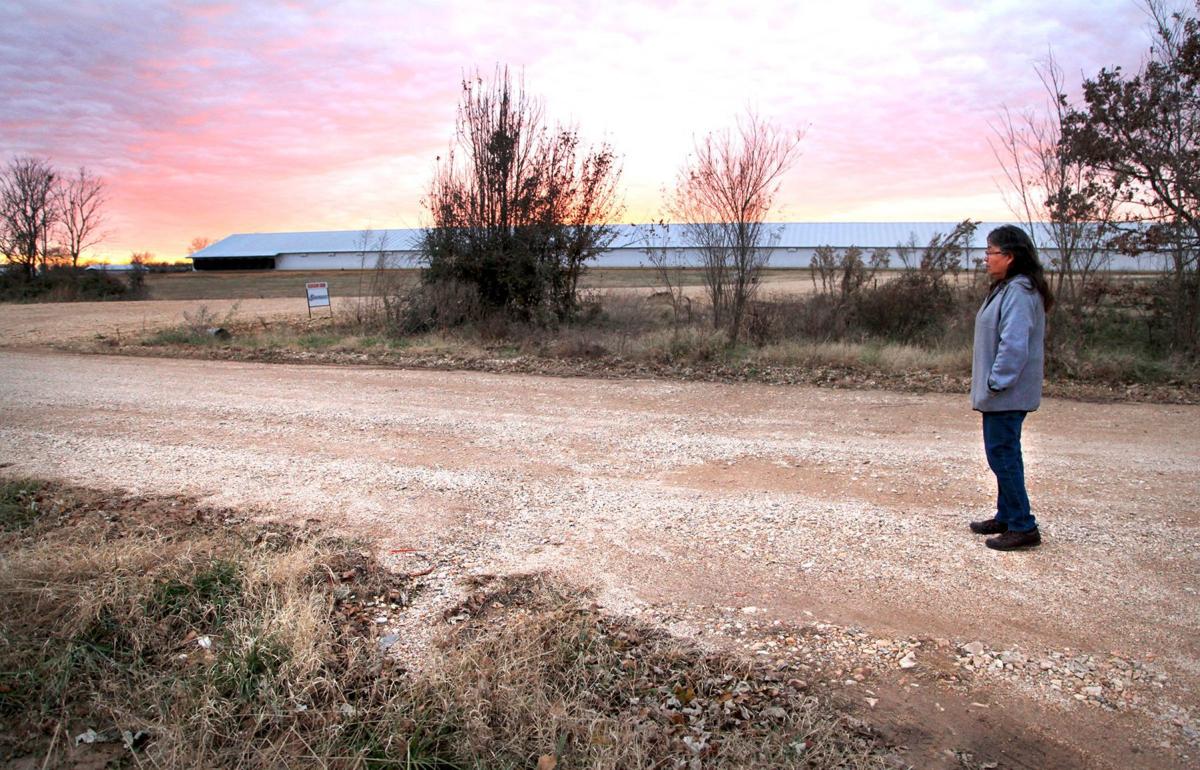 Lou Cochran shows where the county road at her driveway is eroded. She said the erosion is from water flowing across the road downhill from the neighboring Blossom Farm poultry operation in Delaware County. KELLY BOSTIAN/Tulsa World

Lou Cochran shows where erosion runoff debris is left in her driveway. She said the runoff is from water flowing across a county road downhill from the neighboring Blossom Farm poultry operation in Delaware County. KELLY BOSTIAN/Tulsa World

Kent Wilkins, chief of the Oklahoma Water Resources Board planning and management division, responds to questions posed by attorney Jason Aamodt of the Indian and Environmental Law Group at the Delaware County Courthouse on Wednesday.

Lou Cochran shows where the county road at her driveway is eroded. She said the erosion is from water flowing across the road downhill from the neighboring Blossom Farm poultry operation in Delaware County. KELLY BOSTIAN/Tulsa World

JAY — Back in February, Lou Cochran said she was taking a cue from her religion, that she would “love thy neighbor.”

Even if the Blossom Farm poultry operation brought big trucks, dust and some added agricultural smells, her grandson enjoyed playing with the kids at the poultry farm across the road. She was tired of conflict and worry.

Wednesday, the man who lives on Blossom Farm — one of several poultry operations owned by Chau Tran and Donna Nguyen that produce broiler chickens for Arkansas-based Simmons Foods — was solemn-faced as he took the stand in the Delaware County Courthouse.

Robert Miller said it was “very much a surprise” to learn of a lawsuit filed by Cochran and others against the Oklahoma Water Resources Board, Tran and Nguyen.

The kids don’t play together anymore, he told the court.

Lou Cochran was in the courtroom, too.

“I couldn’t look at him when he went up there,” she said later.

The conflict between the neighbors is a microcosm of broader concerns across Delaware County. Last year, it grew into the state’s largest center for poultry production, with an increase in new and expanded poultry farms. It has more than 120 new “mega farm” poultry houses that raise millions of chickens annually.

No matter how much she liked her new neighbors, the lawsuit asking for an injunction — and based on complaints to the water resources board before the farm was built — had to continue, Cochran said.

The Delaware County case was filed in March and final arguments were Wednesday before District Court Judge Barry Denney. Wednesday’s testimony was continued from a hearing in September.

The lawsuit was filed by Delaware County residents and seeks an injunction to prevent the Oklahoma Water Resources Board from issuing groundwater permits for the farm. Among the plaintiffs are Louanna “Lou” Cochran, Andrea Cochran, Gerald Cochran, William Cochran, Melissa Foreman, Suzanne Maupin and Viola Powell.

Attorney Jason Aamodt of the Indian and Environmental Law Group in Tulsa filed the lawsuit, which is against the Oklahoma Water Resources Board, with Tran and Nguyen later added as interested parties.

Attorneys now will submit to the court their respective conclusions and proposed findings of fact by Dec. 11 for the judge to rule on an injunction.

Like many Oklahoma oil well operations and other construction projects, getting the farm going started off with a 90-day temporary permit for groundwater use as it applied for a permanent permit for its two wells. Roughly 1,500 of the temporary permits are issued annually in Oklahoma, according to Kent Wilkins, chief of the Oklahoma Water Resources Board Planning and Management Division.

Wilkins’ testimony filled most of the day Wednesday, as he was on the stand nearly four hours. Most of the time, he took questions to outline agency procedures with Oklahoma Water Resources Board Assistant General Counsel Jonathan Allen.

At the crux of the issue is the water resources board’s issuance of five successive 90-day permits. Those allow the farm to operate, even though the plaintiffs filed complaints against the farm receiving a long-term permit.

The long-term permit involves issuing public notice, a more complete review by the water resources board and final approval by the board. The 90-day permits are issued administratively as long as an application meets basic legal requirements, such as the applicant owning the land over the well site, that the water needed is deemed “for beneficial use,” and that the water use will not degrade surface waters or groundwater.

In testimony, Wilkins pointed out that the farm’s owners must accept all liability in case a permanent permit ultimately is denied, so the temporary permits do come with risk. The farm can’t operate without two wells — one main and one for backup, he said.

Wilkins’ testimony spelled out the water resources board’s jurisdiction, in terms of water use and well design. He said issues with water being wasted in pollution would likely fall to other agencies, such as the Oklahoma Department of Agriculture, Food and Forestry or the Department of Environmental Quality.

That is where Cochran came into the case. Her home is downhill and across a poorly maintained county road from the farm. She says that during heavy rains, water runs downhill from the farm and across her yard. It did even before the farm existed, she said.

“But back then it was clean water,” she said.

Her home and those of others in the area rely on well water they fear could be contaminated or diminished by the nearby farm, which actually is closer than state law now allows under new buffer requirements.

Blossom Farm did construct a driveway and a shallow ditch it claims redirects the runoff toward the ditches along U.S. 412. But Cochran points to a gully in the county road and water pooling around her yard that shows that isn’t the case, especially in this past year of record rainfall.

However, Wilkins said in testimony that the Cochrans’ complaint lacked specifics and that surface water and groundwater concerns are handled separately, by other agencies. He said their complaints were not within the Oklahoma Water Resources Board’s jurisdiction.

“Fear alone is not sufficient to make a valid protest,” he said.

Adding interest to the case, the fifth temporary permit for the farm expires on Nov. 25. A hearing on the farm’s permanent permit is set for Nov. 22 but likely couldn’t be voted on by the full water board until its January or February meetings.

Attorneys for both sides said they assume another temporary permit will be issued to keep the farm running until the court and the water board make their decisions.

“Probably, they will issue a temporary again, without telling anyone, again,” Aamodt said after court was adjourned.

“They’ve run through more than 2 million chickens now without getting a permit, where the neighbors and the people impacted by the use of that water had no chance to say anything about it,” he said.

“We’re not saying that all temporary permits need to have a notice issued; but when a protest gets lodged, the water board ought to step back and go, ‘Whoa, whoa, whoa, there are some interests here that need to be considered, and now due process is required,’ which is what the water board had been doing since the 1980s. They’ve just forgotten,” he said.

Upon arriving home after the day in court, Cochran stood in the driveway in front of her home where she had stood nine months earlier and said, “it’s not so bad.”

She only recanted part of the way she felt. It is bad living so close to the farm. The water runoff scares her.

“I don’t have a yard we can use anymore,” she said.

The smells are sometimes intense. If it isn’t muddy, it’s dusty. And what the big trucks from Arkansas do to the county roads, with loads of chickens and chicken litter that are not covered, beats up her vehicles.

Wednesday evening, she admired a pink, orange and blue sunset visible over the top of the white chicken house roofs next door. She described the smell as sunset brought cool moisture and the ambient odor intensified.

“Smells like puke. It’s that smell. Sorry, I just say what I think,” she said. “But that’s the smell.”

But she still said she holds love for her neighbors.

“I’ve told him it’s not about them, it’s about Simmons and the water board,” she said. “I don’t hold anything against them, but I guess they do against me now.”