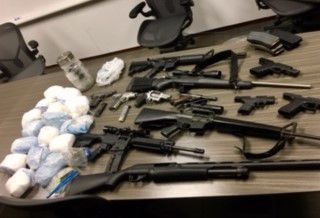 Police and federal agents seized 12 guns and several pounds of drugs while serving a search warrant in Tulsa in 2018. Tulsa Police Department firearm seizures rose from 234 in 2011 to 806 last year. Courtesy

Police and federal agents seized 12 guns and several pounds of drugs while serving a search warrant in Tulsa in 2018. Tulsa Police Department firearm seizures rose from 234 in 2011 to 806 last year. Courtesy

Oklahoma is now a constitutional carry state, but these places don't allow your firearms

The number of illegally used or owned guns taken off the streets in Oklahoma’s two most populous cities continues to be on the rise.

Data from the Oklahoma City and Tulsa police departments show gun seizures are up in both cities as officials say a mix of added crime-fighting enforcement measures and the ever-growing number of guns, owned legally or illegally by Oklahomans, is contributing to the increase. This comes as authorities say they’ll be watching whether Oklahoma’s new permitless carry gun law, which is set to take effect Nov. 1, will prompt more seizures from those who carry a gun in violation of other restrictions, such as having a felony conviction.

“We are not specifically targeting guns by any means,” said Oklahoma City Police Department spokesman Capt. Larry Withrow. “But logic tells you that as more guns are sold, law enforcement will take more guns off the street as a byproduct of other crime enforcement work, especially when we are working high-crime areas.”

Law enforcement agencies nationwide routinely confiscate firearms at scenes of arrests, investigations, traffic stops and disturbances when a gun is used or displayed in an illegal manner. Typically, this occurs when ex-felons, prohibited from owning a firearm, are caught with a weapon or if a gun is used in a crime.

No uniform government database tracks how many firearms law enforcement groups take off the streets each year. But statistics from Oklahoma’s two major metropolitan police departments offer a glimpse into the volume of firearms confiscated. The firearms are destroyed after judicial approval.

The data provided by the Oklahoma City Police Department show the department has seen an uptick in the number of firearm seizures almost every year in the past decade. From 2010 to 2018, gun seizures climbed from 1,535 to 2,068 — a nearly 25% increase.

The bulk of the guns were handguns. Long guns, such as rifles, made up only about 20%.

The Tulsa Police Department tracks its numbers differently, making it difficult to compare the seizure rates between the cities.

Historically, Tulsa only recorded the number of firearms seized by its special investigations division, which includes its narcotics, vice, intelligence, gangs and crime gun units.

Harold Adair, a criminal intelligence analyst with the Tulsa Police Department, said its gun seizures have climbed significantly, rising from 234 in 2011 to 806 last year. Although this year’s number doesn’t look like it will top last year’s — as of Oct. 12, 412 firearms were confiscated — that number is still almost double the total confiscated in 2011.

Starting in mid-2017, the Tulsa department began recording the number of firearms confiscated from elsewhere in the department, such as from patrol officers, and entered into the Bureau of Alcohol, Tobacco, Firearms and Explosives’ eTrace system. This still leaves out the revolvers, shotguns and some hunting rifles confiscated, but Adair said it gives a near-complete picture of the number of guns the department has processed.

When the eTrace and special investigations division numbers are combined, a total of 1,543 firearms were seized in 2018 and 1,070 guns were seized as of Oct. 10 this year.

Adair said part of the increase is due to the department increasing its anti-gang enforcement. But like the Oklahoma City department, he said more seizures are also due to more guns being legally bought and funneled into the black market or used illegally.

According to the FBI’s National Instant Criminal Background Check System, nearly 333,000 Oklahoma firearm background checks were processed in 2018. While not a record, it is a more than 50% increase from the 221,600 checks ordered a decade ago.

The Oklahoma City and Tulsa police departments said they will be monitoring Oklahoma’s new “constitutional carry” gun law that takes effect Nov. 1 to see if the change affects seizure numbers.

Adair said it’s possible the new law, which allows Oklahomans over 21 to carry a gun without a permit, could embolden those who are barred from legally owning any gun, such as most ex-felons, to flaunt Oklahoma’s gun restrictions.

“(The new law) doesn’t say that just anyone is allowed to carry a gun now,” he said. “You still can’t carry a gun while being in possession of a drug, you can’t be a drug user and you can’t be involved in a crime.”

Both departments destroy seized guns rather than reuse or sell them at an auction.

“Our goal is not to put guns back out on the street,” Adair said. “Whatever we might get from the sale just isn’t worth it.”

These places don't allow your firearms, despite the new constitutional carry law

Legislation removing all licensing and training requirements for handguns was the first law law signed by Gov. Kevin Stitt.