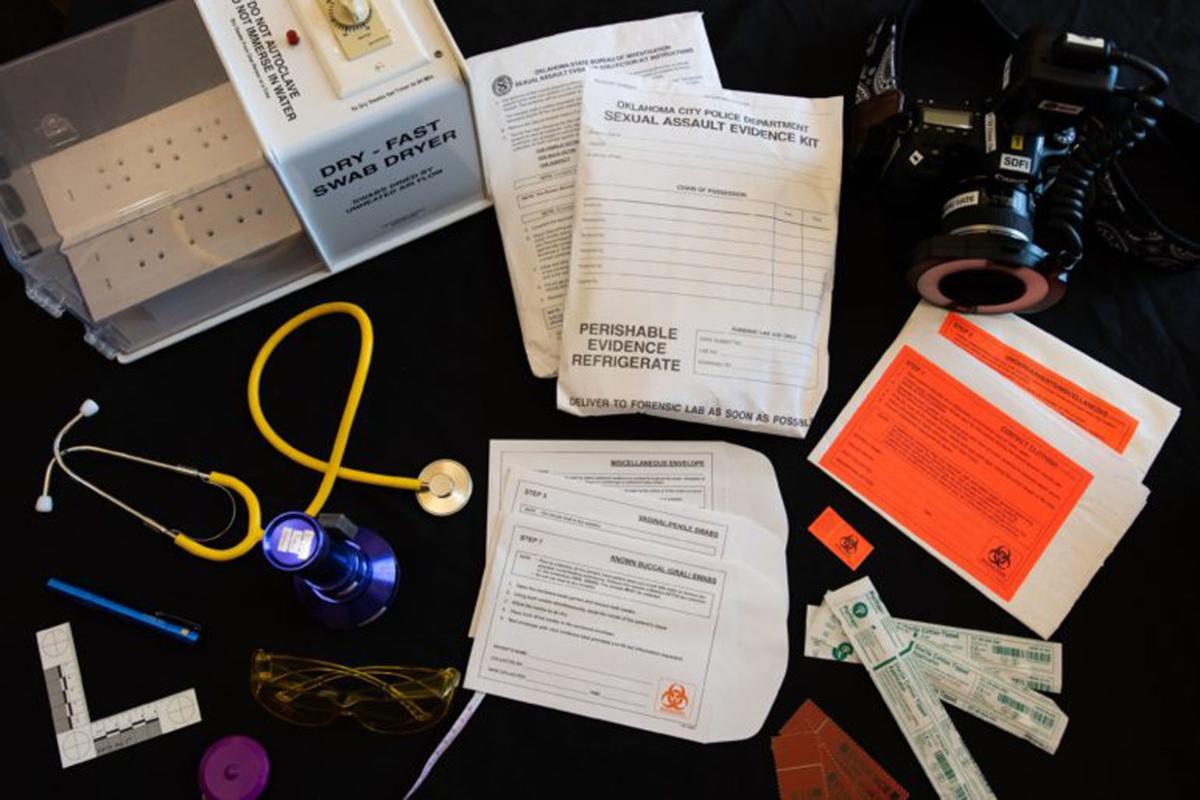 Materials from a Sexual Assault Nurse Examiner kit are spread out on a table at the YWCA in Oklahoma City. Swabs, photos, measurements and victim accounts of an incident are all part of the evidence collected by the specially trained nurses. Whitney Bryen/Oklahoma Watch

Materials from a Sexual Assault Nurse Examiner kit are spread out on a table at the YWCA in Oklahoma City. Swabs, photos, measurements and victim accounts of an incident are all part of the evidence collected by the specially trained nurses. Whitney Bryen/Oklahoma Watch

The number of reported rapes and attempted rapes in Oklahoma climbed for the seventh consecutive year in 2018, reaching its highest level in at least 20 years, new data shows.

But it’s unclear whether most of the increase came from a rise in sexual violence or a greater willingness to report the crime.

And even as rape reports rose, police appeared to be failing or declining more often to clear or solve rape cases.

During the past two decades, the percentage of rape cases that were cleared by police statewide dropped from 62% to 22% last year — possibly a record low.

Clearance can mean arrested and charged, or can be “exceptional,” meaning although an offender is identified, something outside of police control, such as the offender’s death or the victim’s refusal to testify, prevented a prosecution.

“Those (clearance) numbers are staggering,” said Amanda Kemp, who directs forensic exams for sexual assault victims at the YWCA in Oklahoma City. “As more people come forward, we need to improve offender accountability.”

The trends in incidents and clearances have puzzled criminal justice officials and victims’ advocates.

The increase in rape reports in Oklahoma was especially significant last year. The number of reported rapes and attempted rapes jumped by nearly 10% to 2,465, according to the 2018 report from the Oklahoma State Bureau of Investigation.

That appeared to far outpace the national increase, according to partial-year numbers from the Federal Bureau of Investigation. Nationwide, reports of rapes and attempted rapes were up by less than 1% during the first six months of 2018, compared to the same period in 2017, the FBI’s preliminary crime report shows.

Law enforcement officials and victims’ advocates believe the trend is likely due to an increase in both reporting and the number of rapes.

Capt. Gregory Johnston, who oversees Oklahoma City Police Department’s sex crimes unit, said reporting by victims has increased as the department strengthened its partnerships with victims’ support groups. But an increase in incidents is also likely a contributing factor, he said.

At the YWCA, another indicator of sexual-assault prevalence — the number of victims who receive exams to collect evidence of sexual assault — also increased last year. The number of exams performed rose by 13% in 2018 over 2017, Kemp said. But she said she believes the increase reflects more that greater numbers of victims are willing to come forward than that more incidents occurred.

Kemp said the higher number of exams and incidents are a more realistic reflection of sexual abuse in Oklahoma.

The Tulsa Police Department is one of the few reporting agencies that saw a decrease in the number of reported rapes in recent years. The department recorded 422 reports in 2018, down from 423 in 2017 and 439 in 2016.

Sgt. Jill Phippen, who supervises Tulsa’s special victims unit, attributed it to a partnership with local prosecutors, who she said are being tougher on rape cases by pursuing stiffer penalties and prison time more often.

“We’re saying, ‘This isn’t tolerated in Tulsa, and you will be held accountable for it,’ ” Phippen said.

Local efforts and national attention about the issue are empowering women to stand up for themselves and report abuses that used to be taboo or cause shame, Phippen said. That makes it easier for law enforcement officials and prosecutors to successfully press charges.

The decline in clearance rates also has puzzled law enforcement officials and advocates.

Oklahoma’s drop in clearing rape cases reflects a national trend, as reported by the Associated Press in December. The news organization found that the clearance rate for rape cases fell in 2017 to its lowest point since at least the 1960s.

Experts suggested the decline could mean police agencies lack enough resources to properly investigate the increasing reports of sexual assault. It also could mean that police are choosing to clear fewer cases because they are more aware of how new evidence and testimony can surface years after a sexual assault and lead to an arrest.

Last year in Oklahoma, 225 offenders were arrested for alleged rape or attempted rape, and 543 cases were cleared.

Phippen and Kemp both questioned the accuracy of clearance numbers. Kemp doubted that the clearance rate was ever as high as 62%, and Phippen said she thinks changes in clearance practices and policies have caused the recorded number to decline.

“I think we’re going in the right direction, despite what the numbers say,” Phippen said.

How to report a sexual assault

If you or someone you know has experienced sexual assault, contact DVIS in Tulsa at 918-743-5763. Advocates are available 24/7.