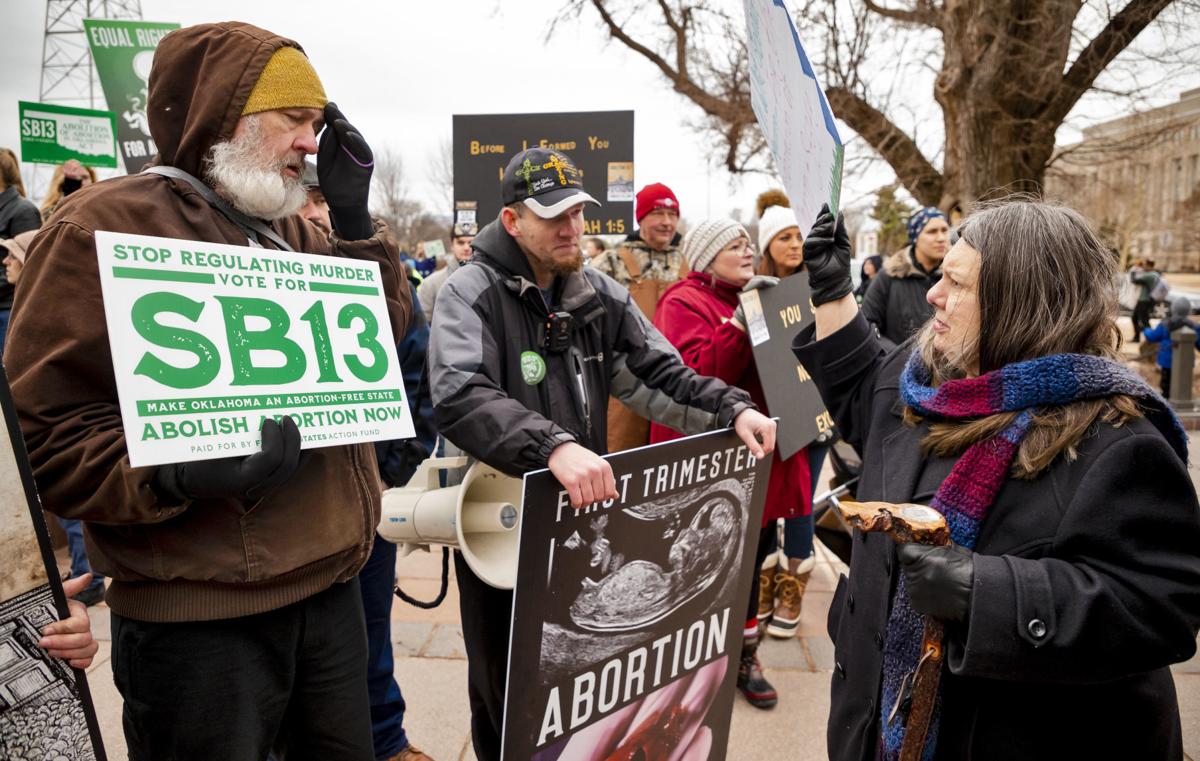 Pro-Life and Pro-Choice supporters debate their stance on abortion during a rally at the State Capitol in Oklahoma City, Okla. on Tuesday, Feb. 11, 2020. CHRIS LANDSBERGER/The Oklahoman 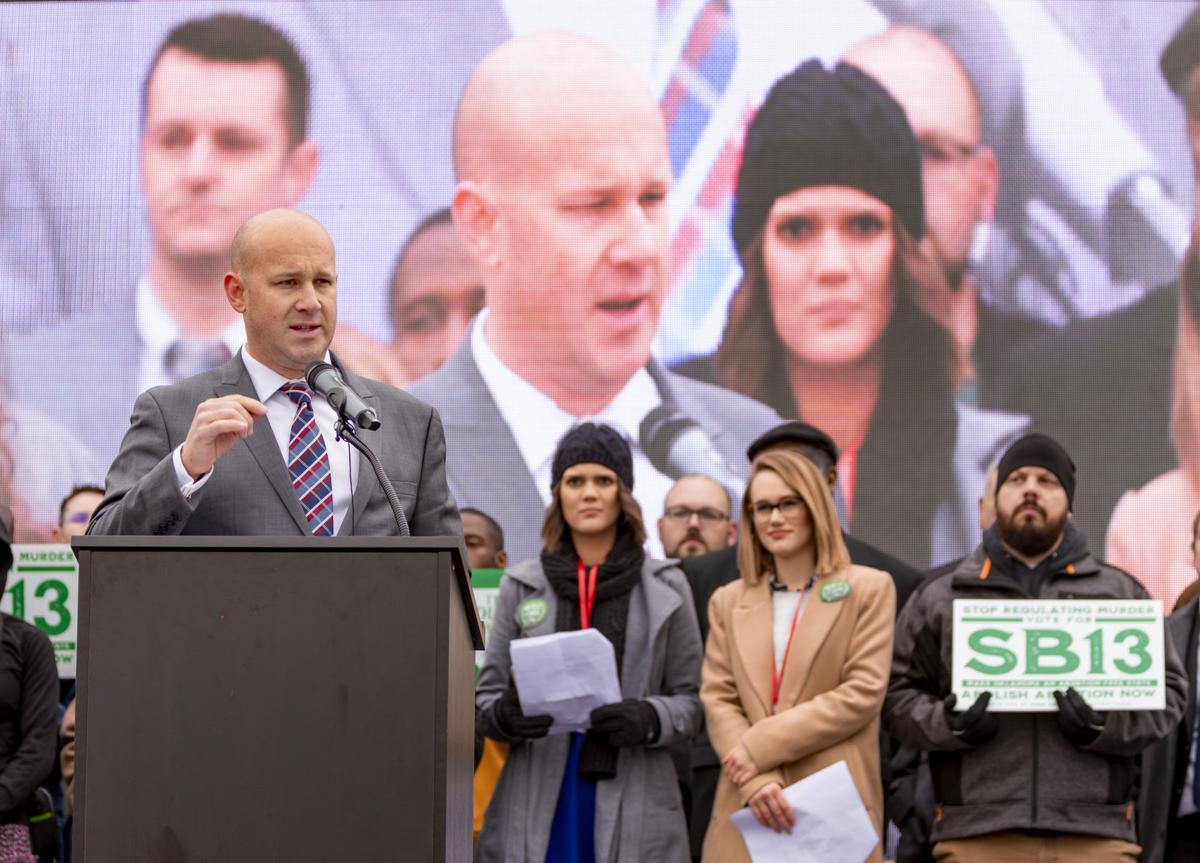 State Sen. Joseph Silk speaks on behalf of Senate Bill 13, which he authored, during an anti-abortion rally at the state Capitol in Oklahoma City on Tuesday. Senate Bill 13 would abolish abortion in the state of Oklahoma. CHRIS LANDSBERGER/The Oklahoman 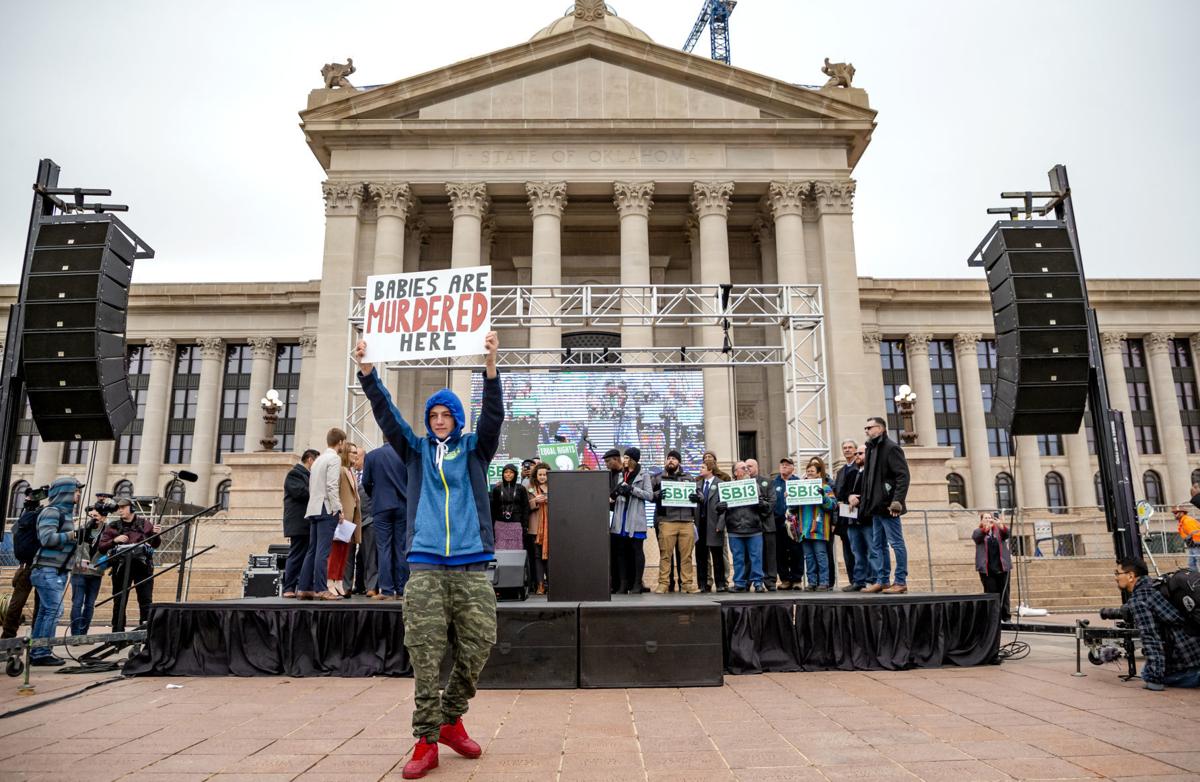 A demonstrator displays his anti-abortion sign during a rally in support of Senate Bill 13 that would abolish abortion in the state of Oklahoma at the state Capitol in Oklahoma City on Tuesday. CHRIS LANDSBERGER/The Oklahoman 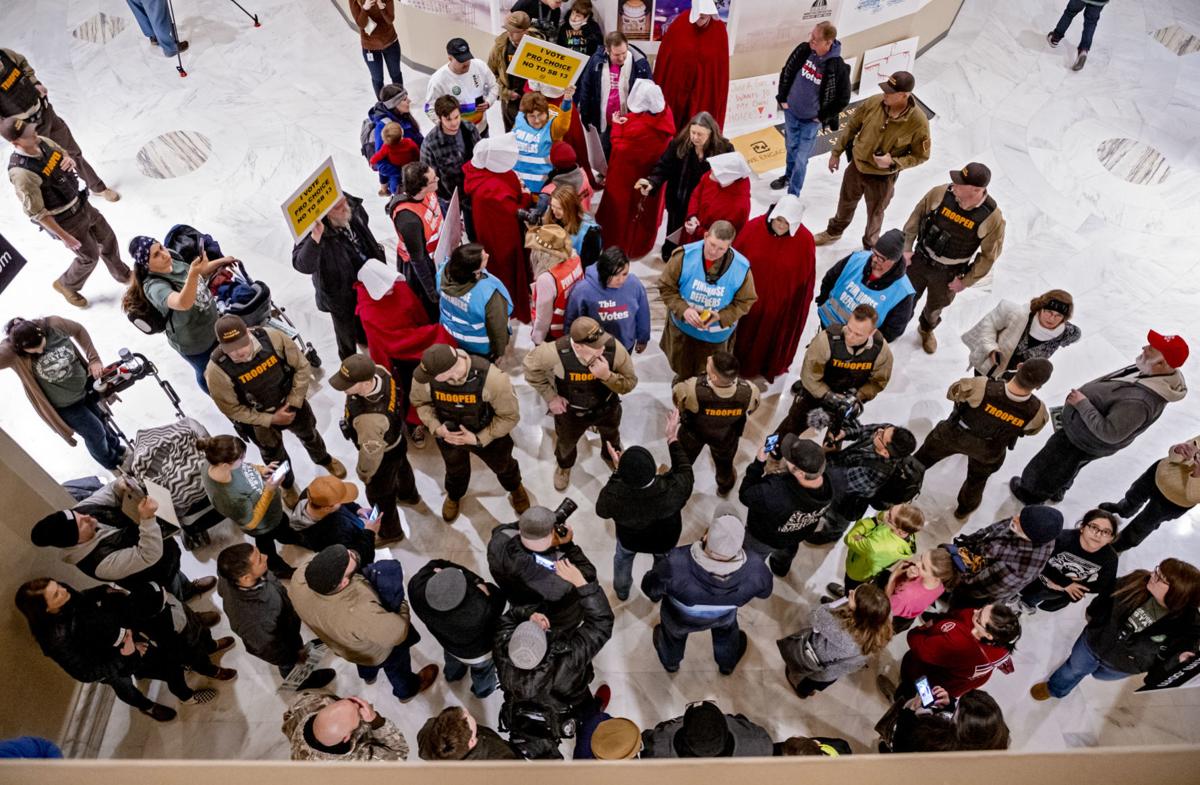 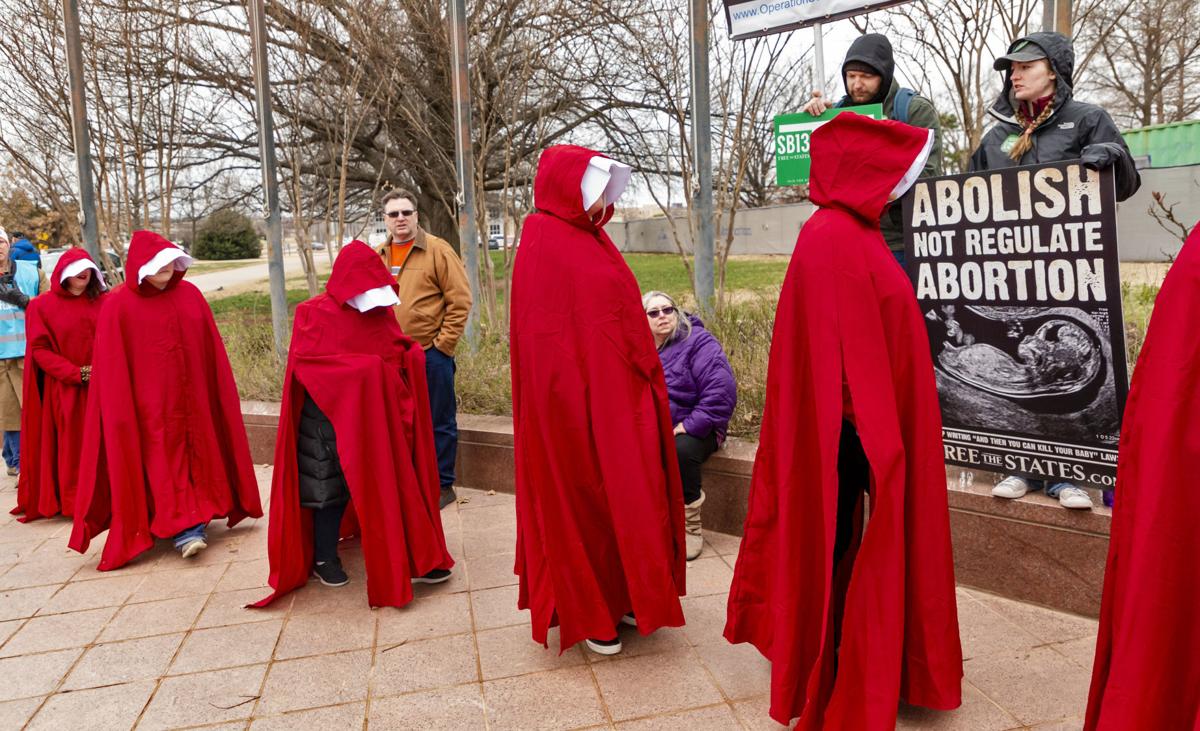 OKLAHOMA CITY — Thousands seeking to abolish abortion rallied in frigid temperatures Tuesday at the Capitol seeking a vote on a bill they say would end the practice.

The bill last session did not get a hearing but is still alive.

Treat, who supports ending abortion, has said he didn’t believe the bill would save one life and was more of a secessionist bill.

Russell Hunter, a lobbyist for Free the States, which organized the rally, said his organization is not the same as pro-life groups, which seek to regulate abortion.

“All of the other bills are substitute bills,” Hunter said. “They are regulatory bills. We oppose them. They are pro-life bills. We are not pro-lifers.”

Hunter said Rose Day attendees come to the Capitol and give lawmakers roses for regulating abortion.

“We are not here to give them flowers,” Hunter said. “We are here to say do your job and we will support you.”

Hunter said it is the conservative, pro-life legislators in power who are keeping abortion legal.

Those attending the rally chanted and joined in prayer that abortion would be abolished.

Julia Bender of Bristow is a piano teacher and is vice chairwoman of the Creek County Republican Party.

“I am here today first out of obedience to God,” she said. “I love Jesus. And I love babies. And I hate the fact they are legally slaughtered in our state. I want God’s blessing on this state, and it is not going to happen while we kill our preborn neighbors.”

A few hundred feet away, those who support a woman’s right to choose abortion gathered, carrying signs that read, “I vote prochoice” and “Reproductive rights sooner rather than later.”

Ali Taylor of Arkansas was among those at the event wearing the costume, which they call a symbol of forced pregnancy and birth.

Susan Braselton of Tulsa is a volunteer clinic escort for Tulsa Women’s Clinic, which performs abortions. Braselton was among those advocating for choice.

“I don’t think a bunch of people should pass their religious beliefs onto the women of this state and make it law,” Braselton said.

She said Senate Bill 13 is unconstitutional. Passing a law to abolish abortion does not get rid of abortion, she said.

Silk told the crowd they were part of a historic movement at a pivotal time in history.

“As you guys can tell, the game of incrementalism that we have been playing for 47 years is completely over in Oklahoma,” said Silk, who is running for Congress. “Oklahoma has not passed a bill to abolish abortion yet, but what the movement has already done in just a few short years has taken all the wind out of the sails of the pro-life movement. There is no excitement about incremental bills that do absolutely nothing any more. We have done that in a very, very short, short time.”

He said the abolition movement has spread “like complete wildfire across the nation.”

Three years ago, Oklahoma was the only state to offer an abolition bill that criminalized abortion as murder and treated unborn children as humans, Silk said. At the end of this year, there will be eight states that have introduced such legislation, Silk said.

Silk said the country was not supposed to win the Revolutionary War, end slavery or stop the Nazi war machine, but it did.

As the rally drew to a close, news helicopters flew over the stage on the south plaza.

Many went inside the Capitol to lobby lawmakers to hear Senate Bill 13.

Cost of insulin for diabetics

How to contact your Tulsa-area lawmakers in the Legislature

The Oklahoma Supreme Court threw out a law requiring any woman seeking an abortion to have an ultrasound within an hour of the procedure and have its contents described to her, another that put restrictions on the RU-486 abortion-inducing drug, and a ban on all medication abortions.

The court also struck down an issue before it could be added to the state ballot that would have let voters decide on an initiative defining a fertilized egg as a "person," thereby banning abortion and most forms of contraception.

An Oklahoma County judge threw out a law that would have required women under 17 to have a prescription to obtain the "morning after" birth control pill.

The Oklahoma Supreme Court in 2019 upheld the unconstitutionality of a law that would have required doctors who treat women seeking a medication abortion to use a decade-old method that is less safe, less effective and more expensive than the current method, according to the Center for Reproductive Rights. It sought to require doctors to follow U.S. Food and Drug Administration protocols and bar off-label uses.

An Oklahoma County judge issued an injunction on a law that would have banned dilation and evacuation, a common second-semester abortion procedure.

Gov. Mary Fallin vetoed a bill that would have made it a felony for physicians to perform abortions and revoke their medical licenses unless the abortion was necessary to save the life of the mother.

The Oklahoma Supreme Court threw out a law targeted against child rapists that would have forced abortion providers to take a sample of the fetal tissue when the abortion patient is younger than 14 and send it to the Oklahoma State Bureau of Investigation.

The high court on Dec. 14 struck down a law that would have required doctors who perform abortions to have admitting privileges at a hospital within 30 miles.