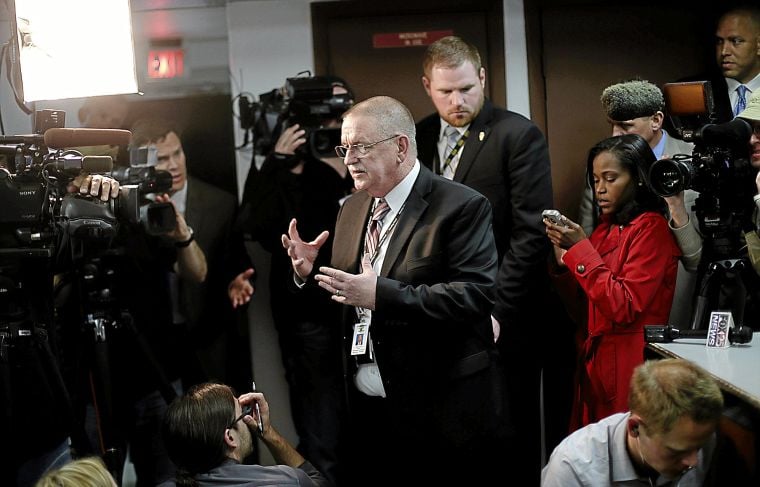 Robert Patton talks with members of the media about the attempted execution of Clayton Lockett. Lockett died of a heart attack after Patton stopped the execution. The second execution of the day has been stayed. Oklahoma State Penitentiary in McAlester, Oklahoma on Tuesday, April 29, 2014. JOHN CLANTON/Tulsa World 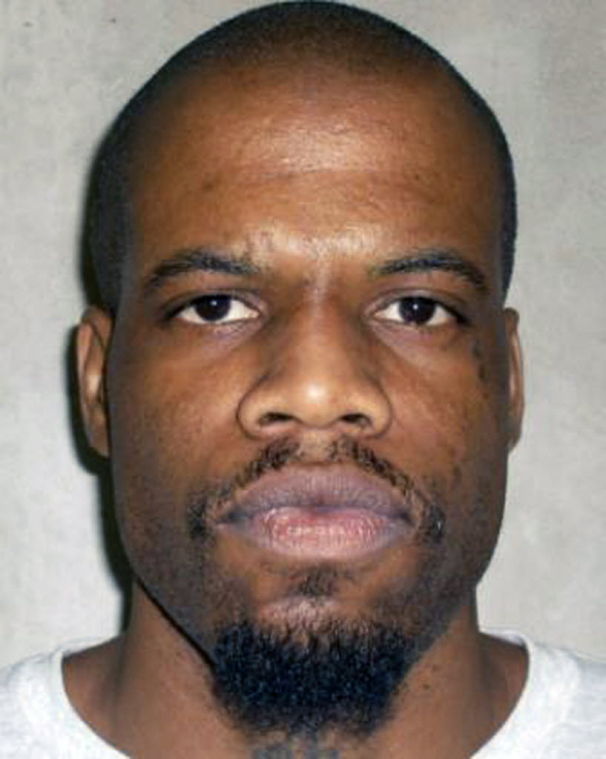 Robert Patton talks with members of the media about the attempted execution of Clayton Lockett. Lockett died of a heart attack after Patton stopped the execution. The second execution of the day has been stayed. Oklahoma State Penitentiary in McAlester, Oklahoma on Tuesday, April 29, 2014. JOHN CLANTON/Tulsa World

Related story: Officials refuse to say if they tried to revive Clayton Lockett

Editor’s Note: Tulsa World Enterprise Editor Ziva Branstetter was one of 12 media witnesses to attend a botched execution Tuesday at the Oklahoma State Penitentiary. Here is her account of what happened Tuesday in McAlester:

5:30 p.m. Reporters are taken in two white vans to the prison’s death row, called the H unit, to attend the execution. Media witnesses can take nothing with them into death row, not even a watch, and are issued a spiral notebook and pen after being searched by correctional officers. We are taken to the death row law library where we wait with two prison officials to be taken to the execution viewing chamber.

5:40 p.m. Inmates can be heard banging loudly on cell doors throughout death row, which prison officials explain is a sign of respect for the inmate to be executed. Not all inmates receive such a sendoff; it just depends on whether other inmates liked the condemned inmate.

5:50 p.m. We are taken from the law library down a long sterile hall, around a corner and into the viewing chamber. Media witnesses file into the back row of two rows of metal folding chairs. Before the execution starts, witnesses for the crime victim, Stephanie Neiman, file into a separate viewing room for victims’ relatives so they can watch the process through one-way glass. Two attorneys for inmate Clayton Lockett, his only witnesses, sit in front of us. Department of Public Safety Commissioner Michael Thompson, Department of Corrections Director Robert Patton and several other state officials also file in, sitting in the front row.

6:23 p.m. The beige blinds covering four windows into the execution chamber are raised and the execution is set to begin – 23 minutes past its scheduled time. This execution has taken longer to start than the three others I have covered and other media witnesses remark on the slow start as well. Oklahoma State Penitentiary Warden Anita Trammell asks Lockett, covered up to his shoulders by a white sheet, whether he has any last words. “No,” is all he says. This isn’t especially surprising. Earlier, Lockett rejected his last meal after being told he couldn’t have a particular kind of steak. “Let the execution begin,” Trammell says. Inside the room are four other people, including a physician and a uniformed correctional officer.

6:28 p.m. Fifty milligrams of midazolam have been injected into each of Lockett’s arms to start the process, an attempt to sedate him before the second and third drugs are administered to stop the breathing and the heart.  Lockett has spent the past several minutes blinking and occasionally pursing his lips.

6:29 p.m. Lockett’s eyes are closed and his mouth is open slightly.

6:31 p.m. The doctor checks Lockett’s pupils and places his hand on the inmate’s chest, shaking him slightly. “Mr. Lockett is not unconscious,” Trammell states.

6:33 p.m. The doctor checks Lockett a second time after a full minute without movement. “Mr. Lockett is unconscious,” Trammell states. It seems like it took longer than expected for this to occur. In past executions I have attended, there has been no notice that the inmate was unconscious, just a pronouncement of death after about eight minutes without much reaction from the inmate.

6:36 p.m. Lockett kicks his right leg and his head rolls to the side. He mumbles something we can’t understand.

6:37 p.m. The inmate’s body starts writhing and bucking and it looks like he’s trying to get up. Both arms are strapped down and several straps secure his body to the gurney. He utters another unintelligible statement. Defense Attorney Dean Sanderford is quietly crying in the observation area.

6:39 p.m. The physician walks around to Lockett’s right arm, lifts up the sheet and says something to Trammell. “We’re going to lower the blinds temporarily,” she says. The blinds are lowered and we can’t see what is happening. Reporters exchange shocked glances. Nothing like this has happened at an execution any of us has witnessed since 1990, when the state resumed executions using lethal injection.

6:40 p.m. A black landline phone rings in the viewing chamber and Patton leaves to take the call, stretching the phone cord out into the hall and closing the door behind him. Though the clock on the wall in the execution chamber is no longer visible, it seems like several minutes pass before Thompson is summoned out to the hallway.

Approximately 6:50 p.m. Patton comes back to the viewing room and says the execution has been “stopped. We’ve had a vein failure in which the chemicals did not make it into the offender. … Under my authority, we are issuing a stay for the second execution.”  The announcement is stunning and leaves us wondering what has happened to Lockett.

Patton leaves for about 10 more minutes and reporters at the end of our row begin interviewing Sanderford and defense attorney David Autry, both clearly upset by the turn of events. “They will save him so they can kill him another day,” Autry says.

We are told to leave the viewing chamber and are escorted back to a waiting white prison van. We have to tear the notes out of the spiral notebook and leave it plus the pen behind.  Another van is on the way so I stay behind with reporters from the Associated Press, The Oklahoman, OETA and The Guardian to compare notes. After every execution, it’s important that reporters compare last words and other observations to make sure they have the most accurate version of events possible.

7:06 p.m. Lockett is pronounced dead in the execution chamber from a heart attack. The news of his death is provided to reporters by Patton during a brief statement at the media center on the prison grounds.  He explains to reporters that prison officials do not know how much of the second and third drugs entered Lockett’s body.

“His line failed,” Patton says. When asked what that means, Patton adds: “His vein exploded.”

Charles Warner is to be executed; here's the story of his victim

Statement by Warden Anita Trammell asserting that the drugs to be used in Lockett's execution were legally purchased, unexpired and properly m…