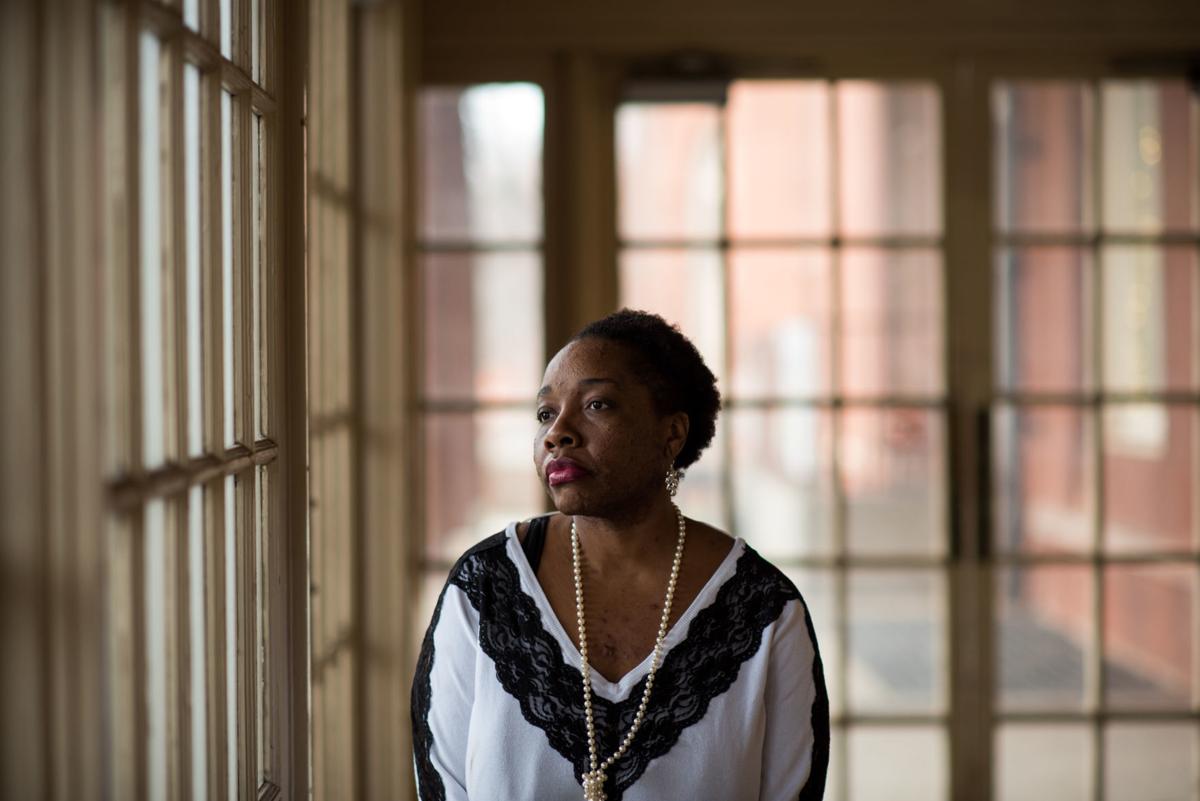 “You’re never really the same after an experience like that,” says Erinn Haynes, who was 13 when a tornado killed her parents and younger sister while leaving her severely injured near Catoosa. ROB HART/for Tulsa World 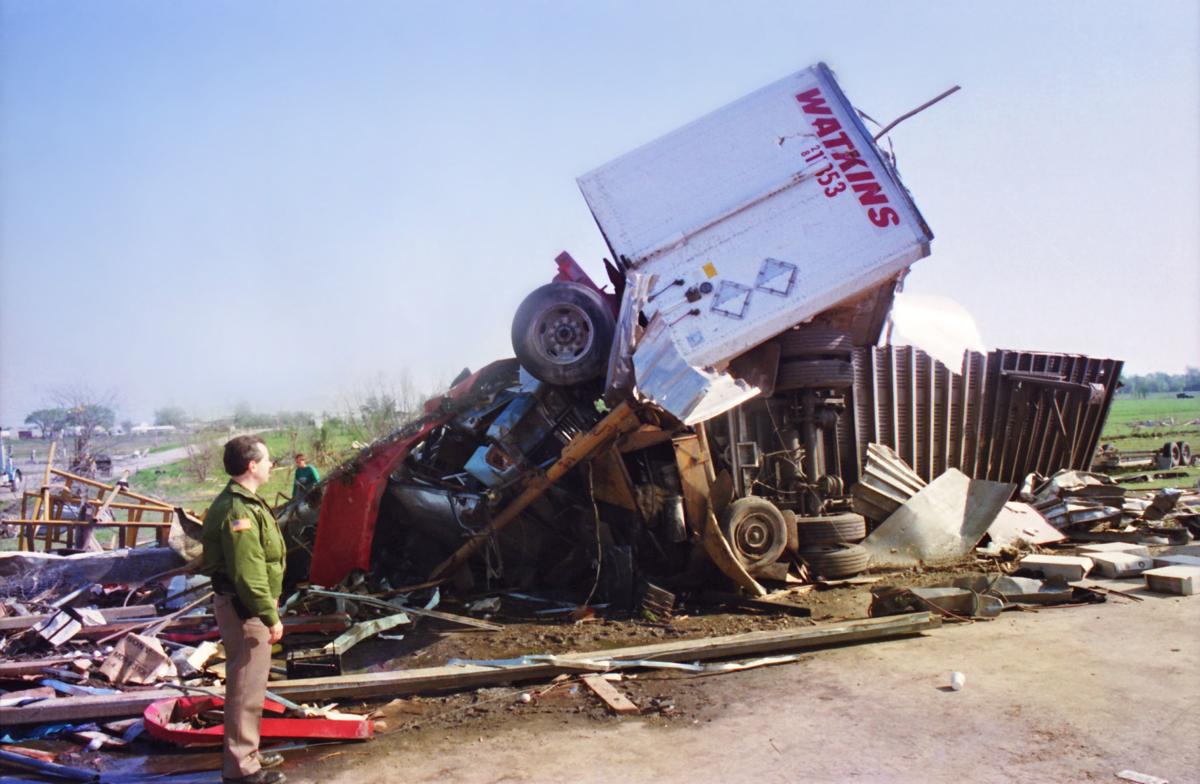 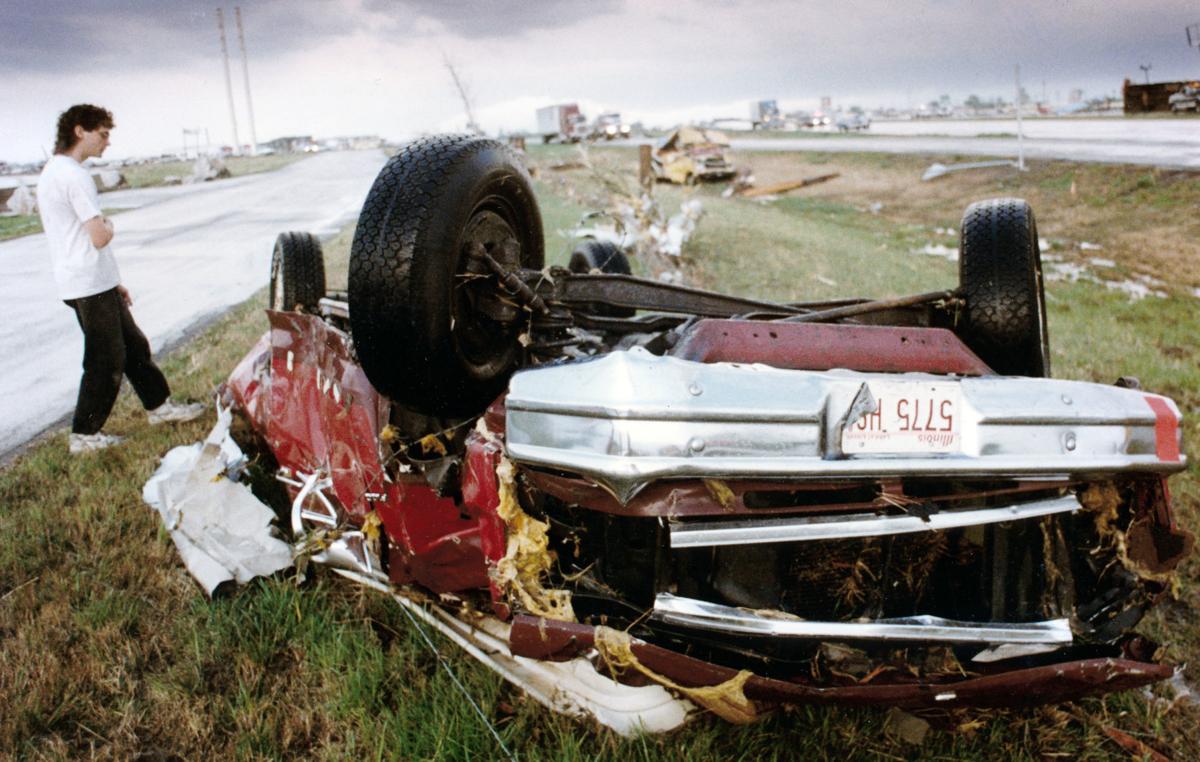 The tornado overturned several cars along Interstate 44 near Catoosa. 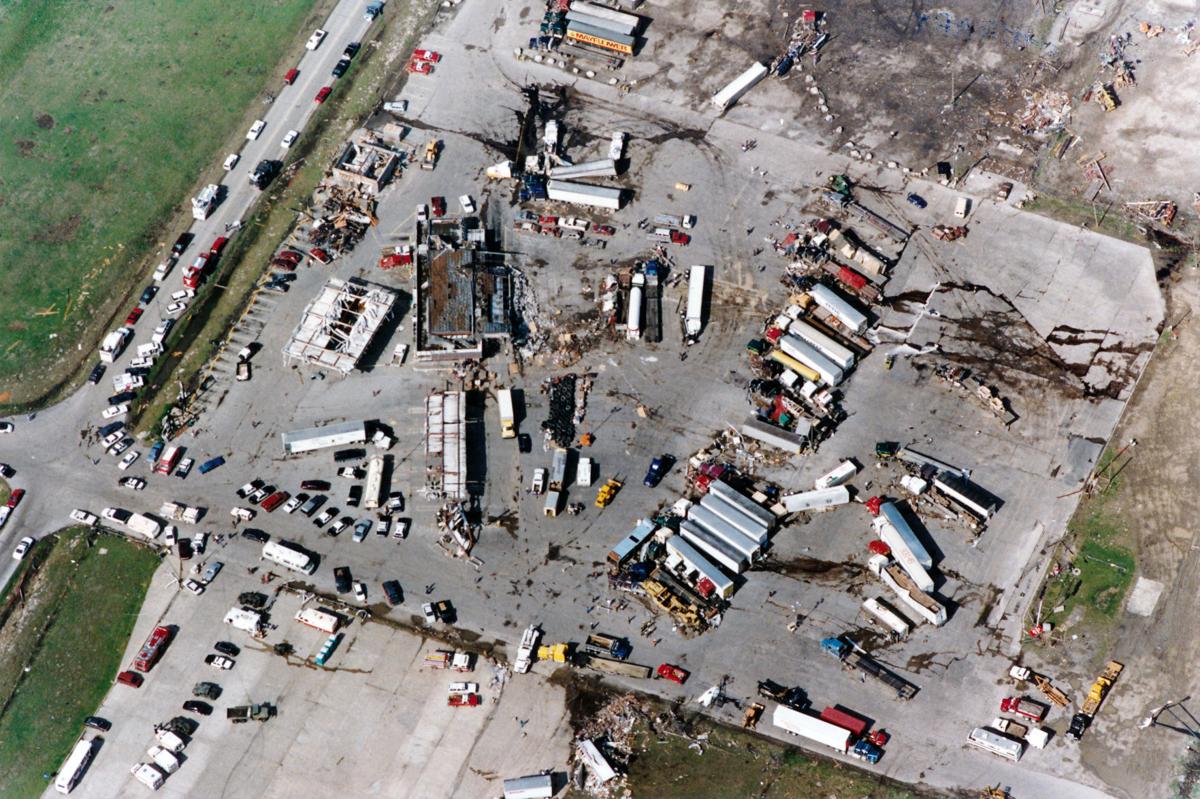 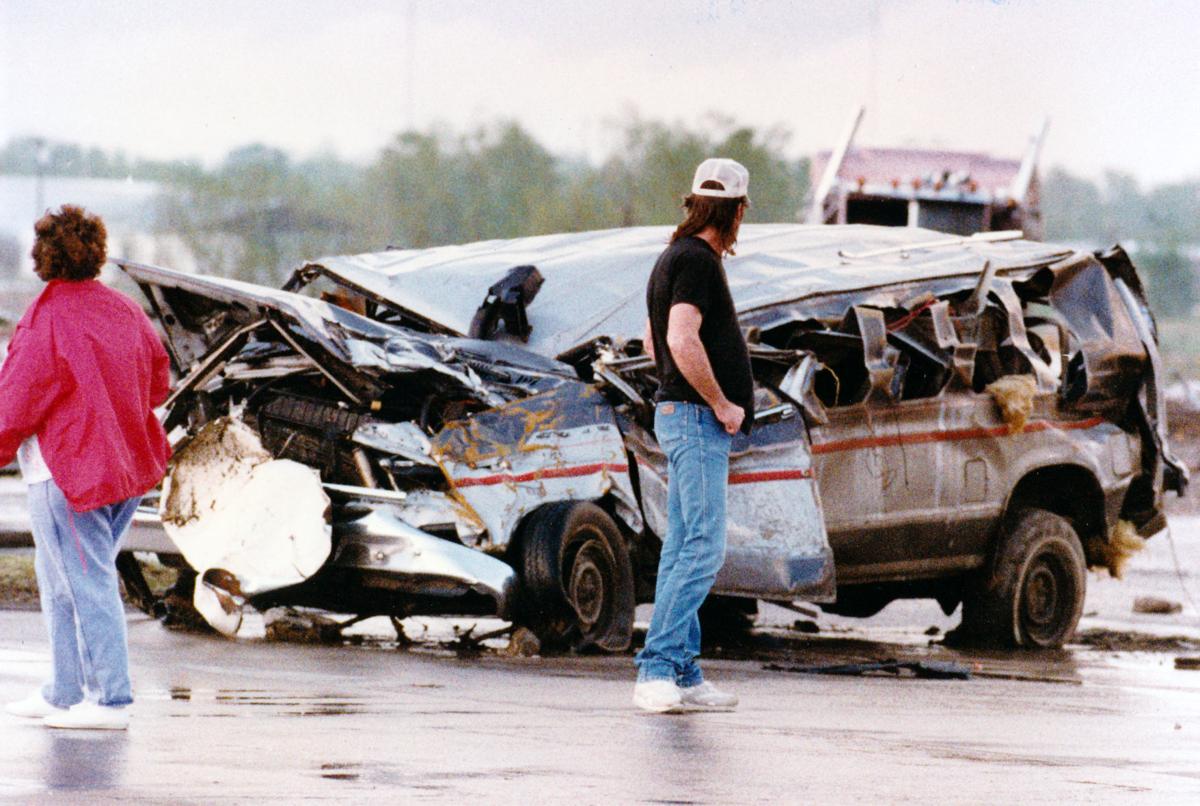 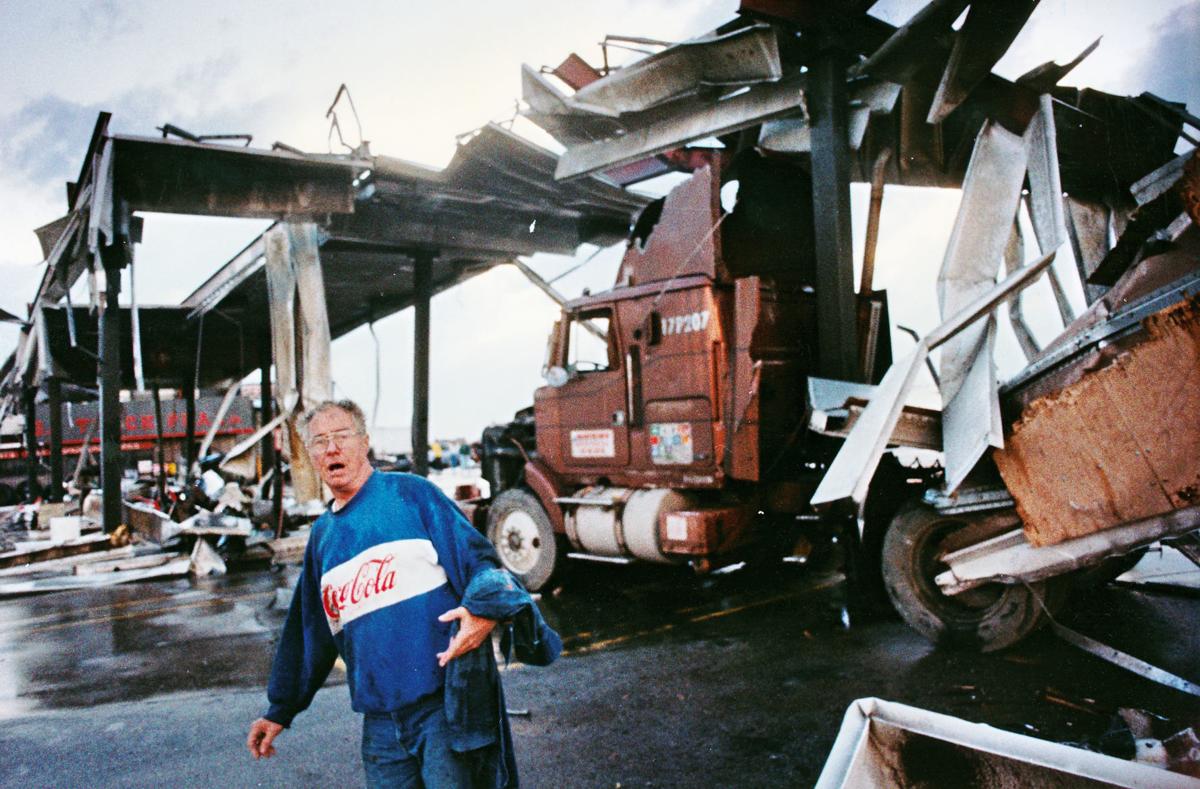 J.D. Williamson of Atlanta walks away from his 18-wheeler at Bruce’s Tulsa Truck Plaza, near Interstate 44 and 161st East Avenue. Williamson and Elas Burgamy were in the cab of the truck when the April 24, 1993, tornado struck, breaking his truck’s windshield and tearing his trailer off its hitch. As the tornado tried to toss the truck, a girder blocked it and kept it from moving farther. Tulsa World file 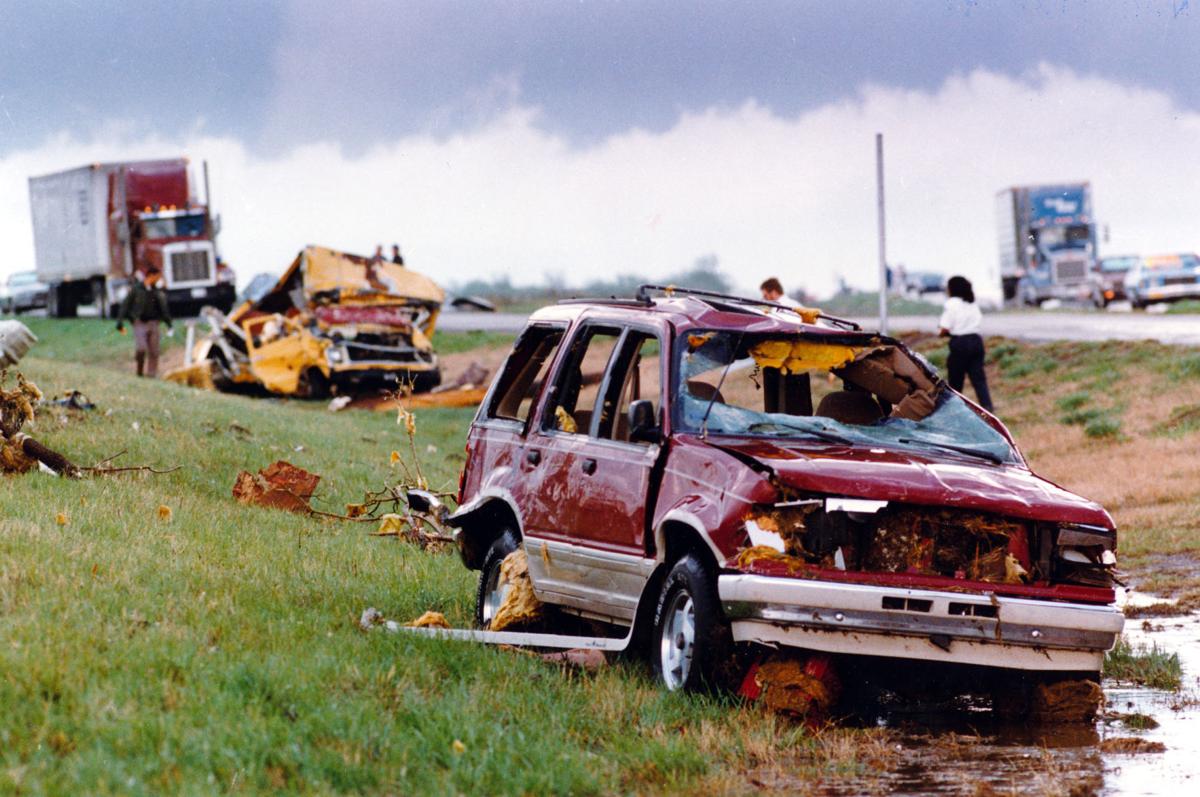 “You’re never really the same after an experience like that,” says Erinn Haynes, who was 13 when a tornado killed her parents and younger sister while leaving her severely injured near Catoosa. ROB HART/for Tulsa World

The tornado overturned several cars along Interstate 44 near Catoosa.

J.D. Williamson of Atlanta walks away from his 18-wheeler at Bruce’s Tulsa Truck Plaza, near Interstate 44 and 161st East Avenue. Williamson and Elas Burgamy were in the cab of the truck when the April 24, 1993, tornado struck, breaking his truck’s windshield and tearing his trailer off its hitch. As the tornado tried to toss the truck, a girder blocked it and kept it from moving farther. Tulsa World file

Photo gallery: See the devastation of the deadly 1993 tornado that hit Catoosa

On the way from Chicago, the family stopped at the arch in St. Louis, where 13-year-old Erinn Haynes played on a grassy knoll with her little sister before climbing back into a Toyota van and heading toward Oklahoma City, where they were going to visit an uncle.

It would turn out to be one of Haynes’ most treasured memories. She tries not to think about the rest of the trip.

She sat in the passenger seat while her father, a gregarious engineer who loved jazz and made friends easily, drove west on Interstate 44. Her mother, a super-smart head nurse at Chicago’s Columbia Hospital, sat in the back seat with 8-year-old Paige, who never talked much but rarely stopped smiling.

The sky darkened as they approached Tulsa that Saturday evening in April 1993.

“We had never seen that kind of darkness before,” Haynes told the Tulsa World last week. “And we didn’t know what to do.”

Not able to see through the blinding rain and hail, her father pulled over and stopped, telling his family to get down on the floor and pray.

The four of them held hands; moments later, the car left the ground. Haynes heard her mother and sister scream. Then something hit the back of her head.

A storm chaser found her lying in the interstate’s center median near 161st East Avenue. And she woke up more than 48 hours later at Saint Francis Hospital.

“I kept asking if my family was OK,” Haynes said. “And my grandmother had to be the one to tell me.”

Ralph and Anita Haynes died in the van. Paige’s body was thrown “some distance away,” according to news reports from the time.

The Catoosa Tornado, as the storm became known, left seven people dead and more than 75 injured while destroying more than 300 homes and at least 46 businesses, causing more than $120 million in damages. Twenty-five years later, it remains one of the worst natural disasters to ever hit metropolitan Tulsa.

The New York Times reported that Catoosa had been “demolished.” And the Tulsa World compared the devastation to the “bombed-out villages in Bosnia-Herzegovina.”

The Catoosa Tornado was actually two funnels striking almost simultaneously and running parallel to each other about a mile apart on April 24, 1993. The smaller one, an EF-3 with winds reaching more than 160 mph, touched down at 6:48 p.m. just southwest of 21st Street and 145th East Avenue in east Tulsa, where the storm headed northeast to cross I-44 near what is today the Creek Turnpike junction.

The larger tornado, an EF-4 with winds exceeding 200 mph, started at 11th Street and 129th East Avenue and stayed on the ground for more than eight miles, passing just northwest of what is now the Hard Rock Hotel & Casino Tulsa on its way toward downtown Catoosa.

That put 18-year-old Hope Hosey between the two paths as she drove down Cherokee Street, where large hail and high winds spurred her to pull over and run for cover inside the Catoosa Post Office.

She almost reached the door before the storm picked her up into the air.

“The last thing I remember was a piece of metal flying at me,” said Cosey, now 43 years old and working for Catoosa Public Schools. “I woke up on the ground.”

The tornadoes demolished Catoosa’s nearby high school along with the football stadium, and the district’s administrative building suffered severe damage along with three other school buildings.

“It’s still a pretty huge deal for a lot of us,” Cosey said. “People haven’t forgotten.”

Thomas Sweet, now Catoosa’s vice mayor, happened to be in Tulsa when the storm hit. He came home to find his house leveled and his personal belongings strewn across the neighborhood north of I-44.

“A house you can rebuild,” he said. “It’s the sentimental things that you never get over.”

Catoosa eventually came back stronger than ever, especially along the I-44 corridor where the Cherokee casino now anchors one of the largest tourist resorts in the state. The town’s population has surged more than 50 percent since the tornadoes.

Bruce’s Truck Stop, a bustling 16,000-square-foot service center that was reduced to a pile of twisted metal near I-44 and 161st East Avenue, reopened within six months. But other nearby businesses were slower to come back, and profits lagged. The truck plaza changed ownership several times before the business shut down in 2003.

The location now holds a large QuikTrip. But when the new facility was built, crews carefully preserved a grave marker-style memorial to the seven victims of the 1993 tornado.

Haynes has never seen it. But after being raised in Chicago by her grandmother, she did come back to Oklahoma to study at Langston University, where she graduated in 2004. She later earned a master’s degree in social work and will begin working on a doctorate next year.

Now 38 years old, she uses a walker and will undergo hip-replacement surgery in June to lessen pain that doctors blame on her injuries from 1993.

“They told me to expect it as I got older, and here it is,” Haynes said. “You’re never really the same after an experience like that.”

Not physically. And not psychologically, either. She still goes to counseling to cope with symptoms of post-traumatic stress disorder, including nightmares, anxiety and insomnia. And she thinks about her family a lot.

Especially her sister, who would have turned 34 this year.

“She was very quiet but very loving,” Haynes said. “It took her awhile to warm up to you, but once she did, look out! You couldn’t get rid of her. I think we would be really good friends right now.”