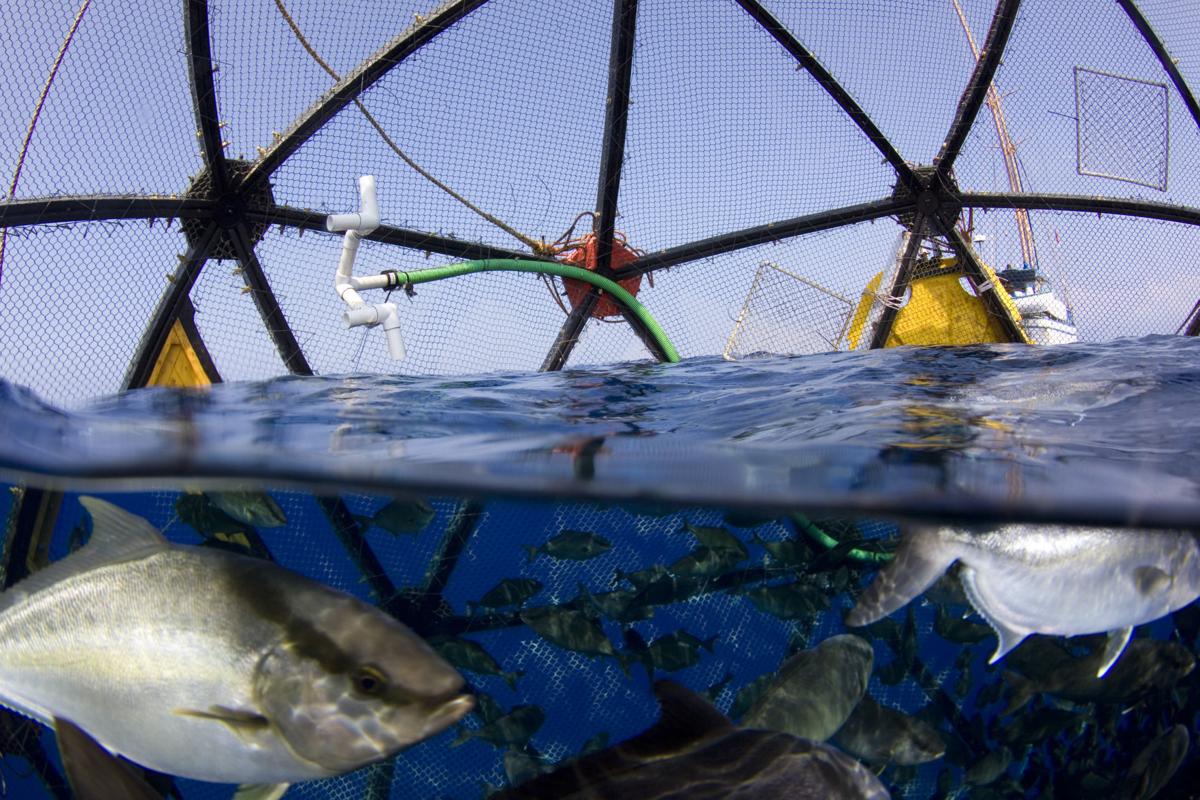 The proposed Kampachi Farms project offshore of southwest Florida will resemble the Velella Farm demonstration pen in Kona, Hawaii, pictured here. The first in federal waters in the continental United States, it will raise 20,000 almaco jack fish for human consumption in a chain-link mesh pen anchored to the bottom of the Gulf of Mexico. 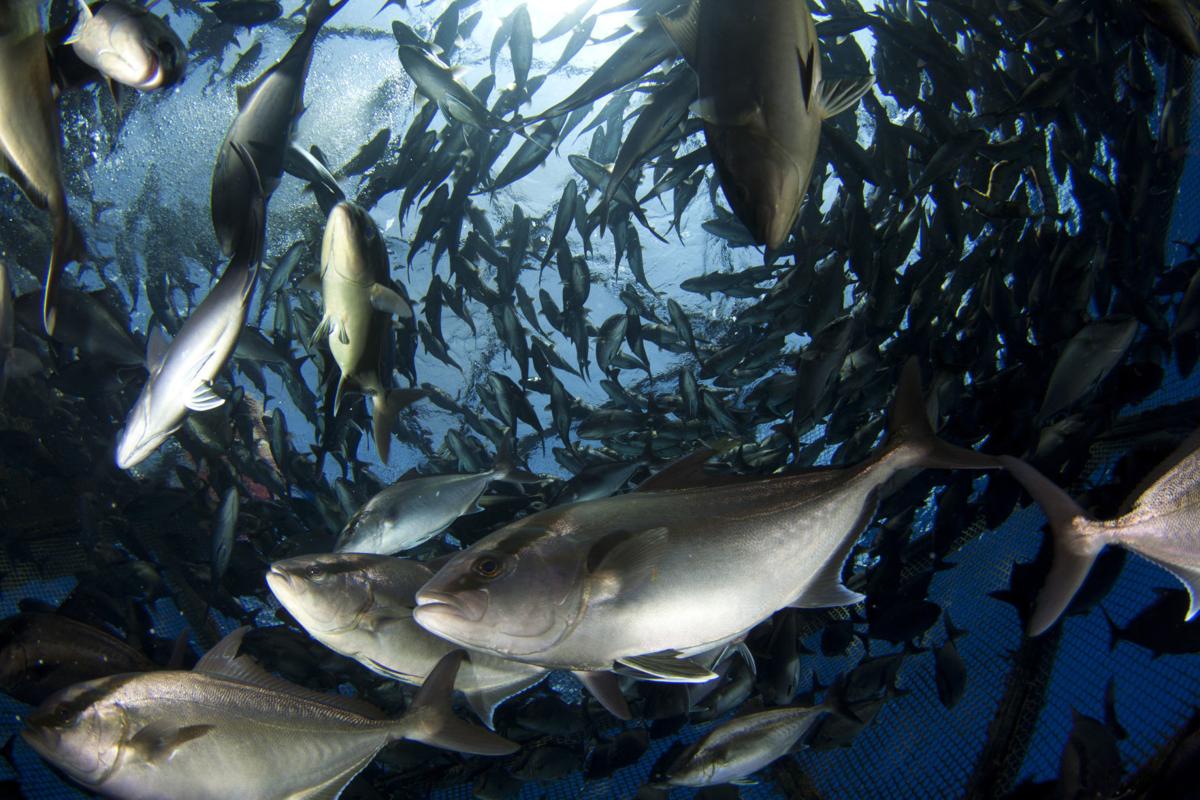 The proposed Kampachi Farms project off Florida will resemble the Velella Farm demonstration pen in Kona, Hawaii, pictured here. The first in federal waters in the continental United States, it will raise 20,000 almaco jack fish for human consumption in a chain-link mesh pen anchored to the bottom of the Gulf of Mexico.

The United States imports 90% of its seafood, most of it farmed and mostly from China.

By nearly any accounting, the United States has lagged in fish production even as demand has grown. In the early 1990s, the United States and Norway had similar marine aquaculture output. Now, the Scandinavian nation, with only 1.6% of the American population, raises about seven times as much fish. Worldwide demand for high-quality farmed seafood is rapidly increasing.

Experts predict two-thirds of edible fish will be farmed by 2030, but they frequently disagree on the best means for doing so.

This debate will come to a head Tuesday at Mote Marine Laboratory in Sarasota, Florida, the upshot of which may have significant implications for federal waters in the Gulf of Mexico. The U.S. Environmental Protection Agency will hold a public permit hearing at 5:30 p.m. to consider final approval of the proposed Velella Epsilon aquaculture project.

If approved, it would be the first finfish aquaculture project in the gulf, capable of raising 20,000 almaco jack (a species similar to an amberjack) each year. It also would be the first in federal waters in the contiguous United States.

The prospective demonstration farm from Hawaii-based Ocean Era has engendered strong opposition from local residents and environmental groups, who worry that setting a chain-link mesh pen in open water 45 miles southwest of Sarasota would upset the ecosystem and establish a precedent of privatizing federal waters, paving the way for more farms.

"The problem is not so much the one farm, but what about 10 or 15 farms? That's a lot of extra pollution to put into the gulf," says Neal Schleifer, a 40-year resident of Siesta Key who opposes the farm. "The permitting here is for pollution discharge. Our area is particularly sensitive and prone to red tide blooms. Our largest industry is tourism. Is it worth that risk?"

Aquaculture projects, frequently energy and capital intensive, have been relegated to state-controlled waters and things like inland recirculating aquaculture systems. Ocean waters between three and 200 miles out are under federal control and have previously been off-limits to farming because of concerns about its effect on wild fisheries and ecosystems.

"How many pounds of fish were grown in federal waters last year? None. That's environmentally irresponsible and morally irresponsible," says Neil Anthony Sims, the chief executive of Ocean Era. "If we are going to work toward more sustainable solutions, the fundamental mantra is deeper water and further offshore. If you do it offshore and with good currents, you can meet the most rigorous standards."

He says that because of the greenhouse gas emission crisis and growing population pressures, "we need to move from more terrestrially sourced foods to marine foods, and we have to have sources of sustainably scaled-up seafood."

On Aug. 30, the EPA issued a draft permit for the project under the authority of the Clean Water Act, which Marianne Cufone, executive director of the nonprofit Recirculating Farms Coalition, says represents an end-run for Sims and Ocean Era. The National Oceanic and Atmospheric Administration moved to approve several aquaculture operations in the Gulf of Mexico in 2016, but these efforts were stopped by legal challenges that cited the Magnuson-Stevens Fishery Conservation and Management Act, the nation's primary fisheries management law.

"There was a 2016 case that we challenged legally and we won," Cufone says. "We stopped them in federal waters in the Gulf of Mexico. They are ignoring the lower court's opinion. They didn't do this under Magnuson-Stevens, they went for approval from the EPA and the Army Corps of Engineers. It has already lost in Congress."

Many environmentalists worry that huge amounts of fish waste result in waters with higher levels of nitrogen and phosphorus, which cause algal blooms, something that has plagued Florida's gulf coastline the past few years, killing fish and keeping tourists away from beaches. Cufone says ocean aquaculture can be a threat to wild fish stocks, either by spreading diseases or by escaped fish, which have been bred to grow faster and bigger, dominating the habitat of indigenous fish. Cufone says she also worries that interbreeding escaped fish with wild fish could weaken the genetics and behaviors of the wild fish.

Beyond privatizing federal waters and creating no-go zones, commercial fishers say aquaculture has an unfair advantage and threatens their livelihoods - on top of problems like cheap imports, rough hurricane seasons, pollution that has caused dead zones in the gulf and rising water temperatures that have plagued professional anglers in recent years.

"Wild fisheries are dying because of lack of fish, not because of competition from aquaculture," Sims says.

The demonstration pen would be 17 meters across and 7 meters deep, sunk to 40 meters below the surface, anchored to the bottom and with a feed barge tethered to its side. Sims says the fish would grow to market size, about 4 1/2 pounds, in 12 months and that while wild almaco jacks are about 4% fat, farmed ones are 30% fat, "the Kobe beef of the sea." He says that farms of this sort appeal to consumers' desire to know their food's provenance and that ecosystems surrounding these farms teem with other wildlife.

Still, liberal nations such as Canada and Denmark have started to move away from open water net-pen aquaculture and toward land-based, closed-containment farms.

Some Florida boosters like Ed Chiles, a restaurateur on Anna Maria and Longboat Key, say they are withholding judgment until more is known about open-pen aquaculture's effect on federal waters.

"I don't know if I'm for it or against it, but I'm definitely for looking at it," Chiles said. "This has been a long time coming, and here's someone taking the risk with something that is highly capital intensive. Yes, this could be part of a rush toward deregulation. But seafood is our second biggest trade deficit. We have to ask ourselves, do we trust our people more than we do those in other countries?"