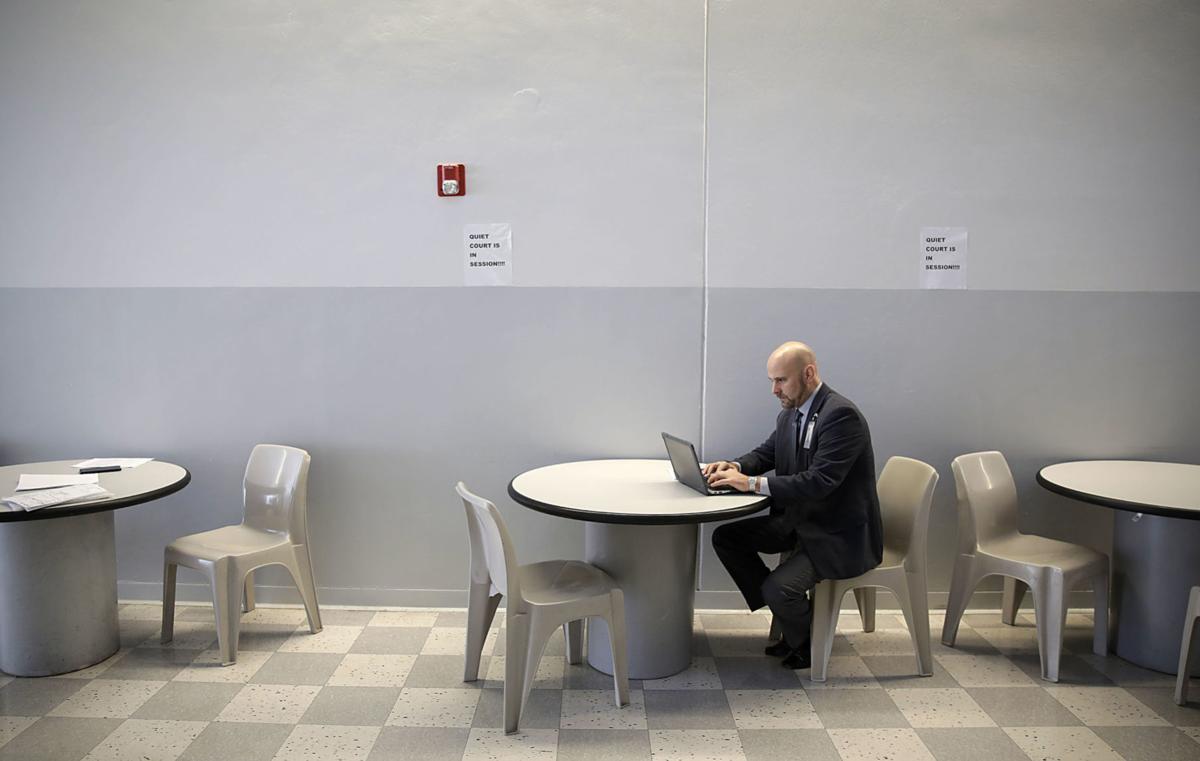 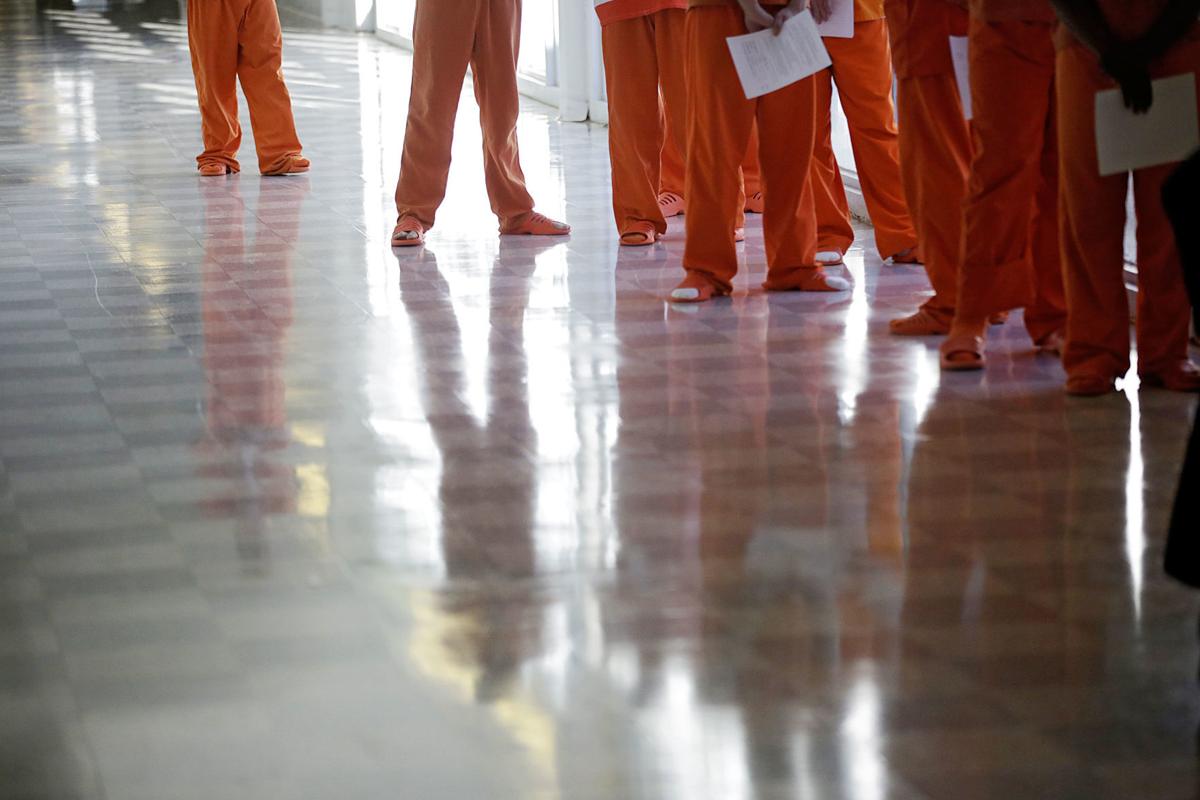 Inmates wait in the hallway to meet with attorneys before their video hearings at the Tulsa County jail in November. Tulsa County recently adopted a seven-day bail docket in an effort to cut down on time that eligible prisoners are kept in custody after arrests. MIKE SIMONS/Tulsa World 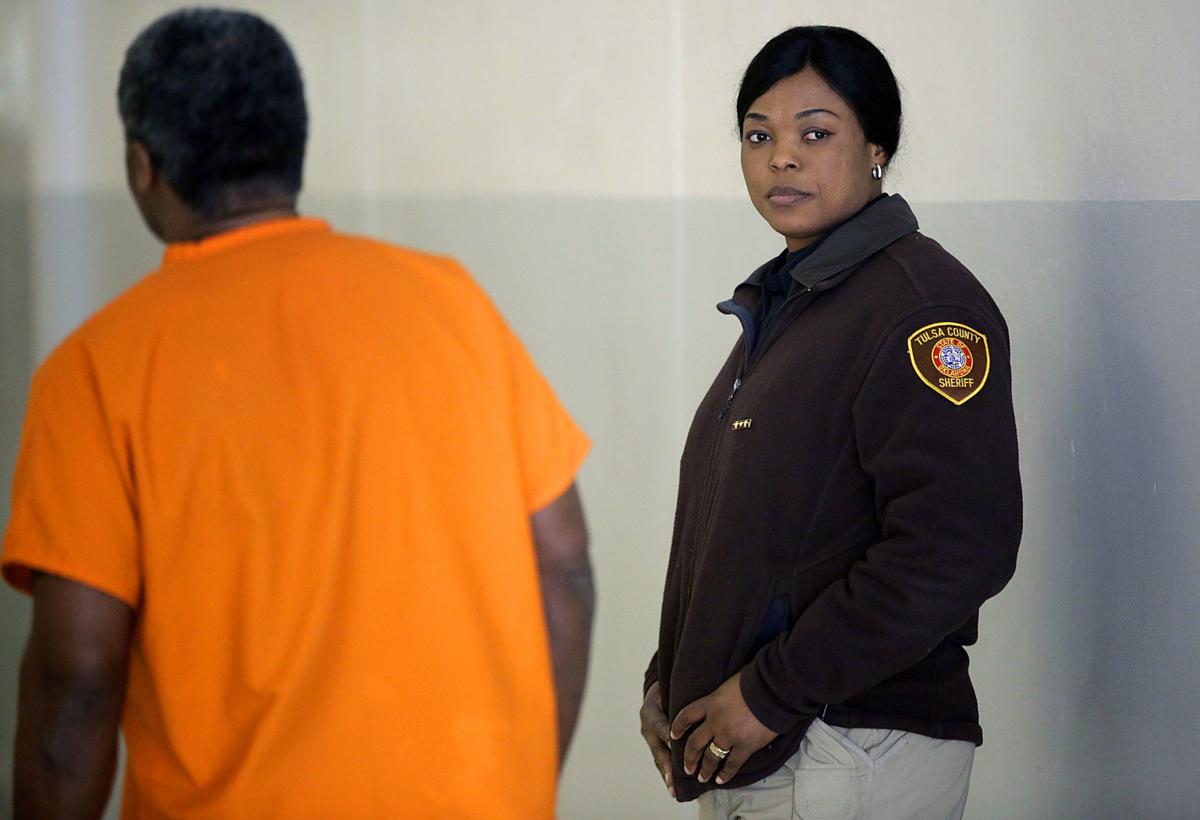 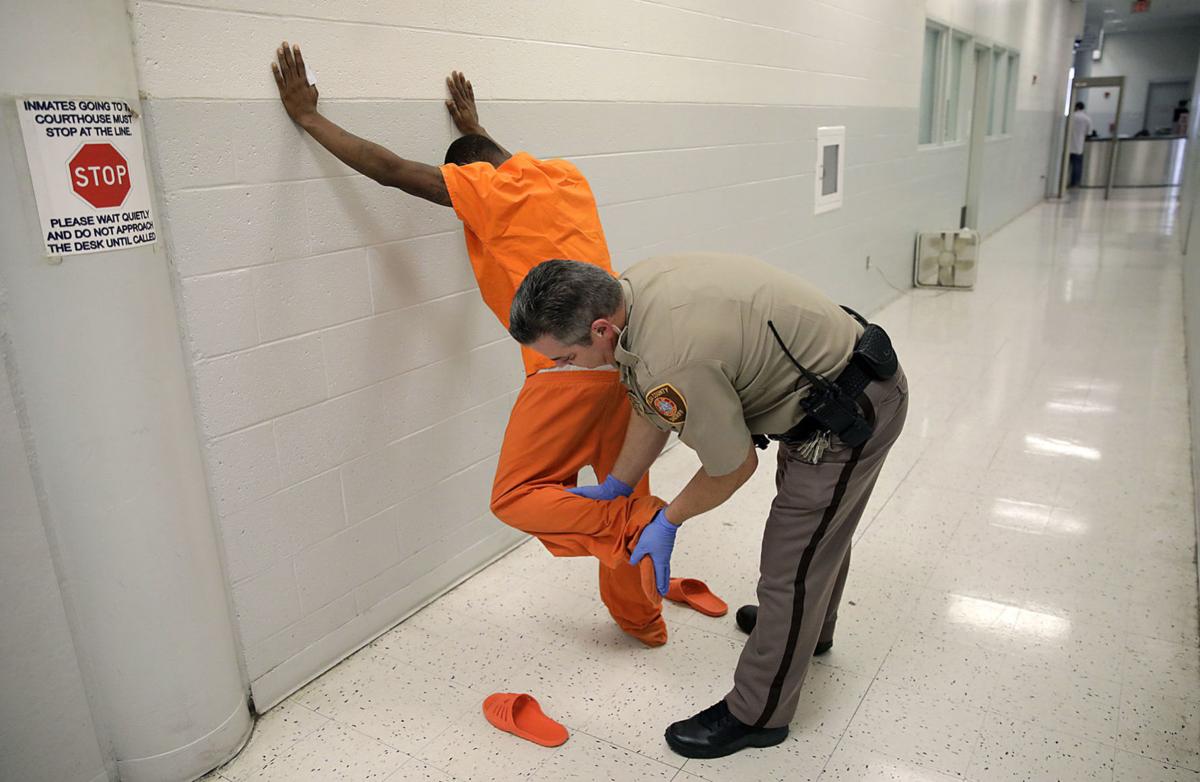 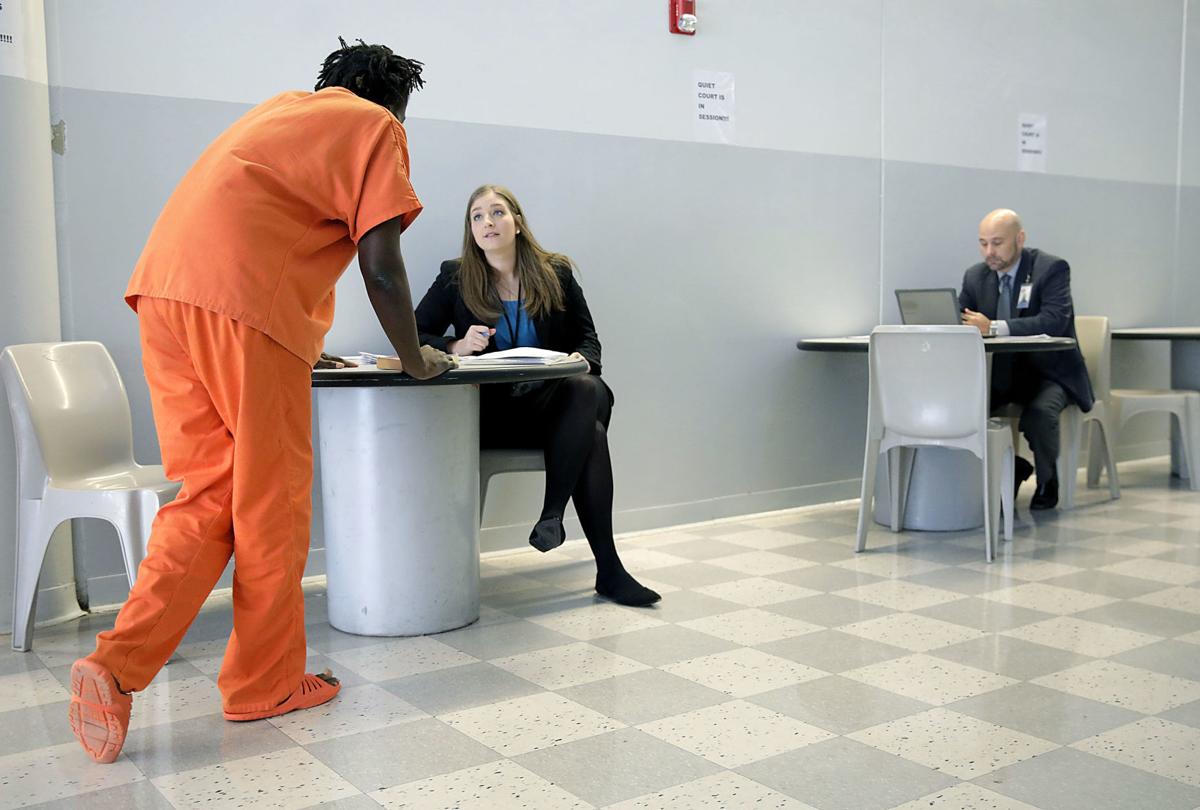 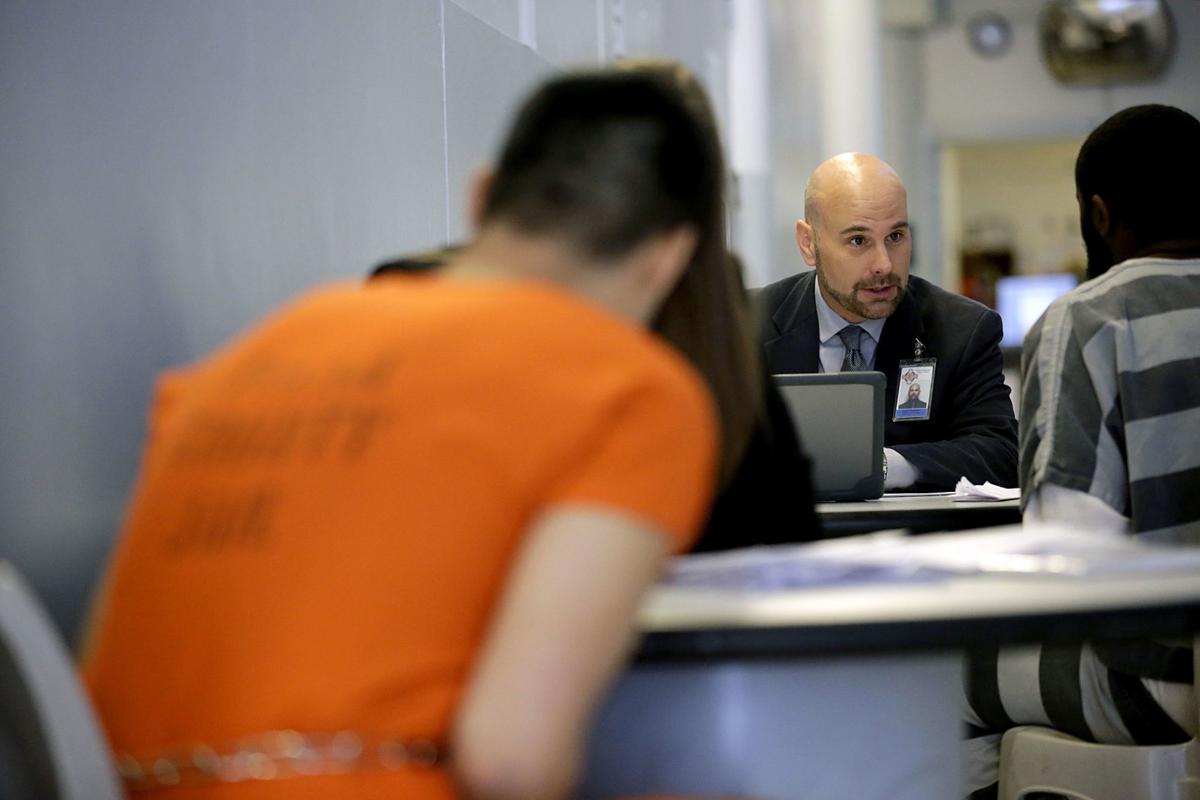 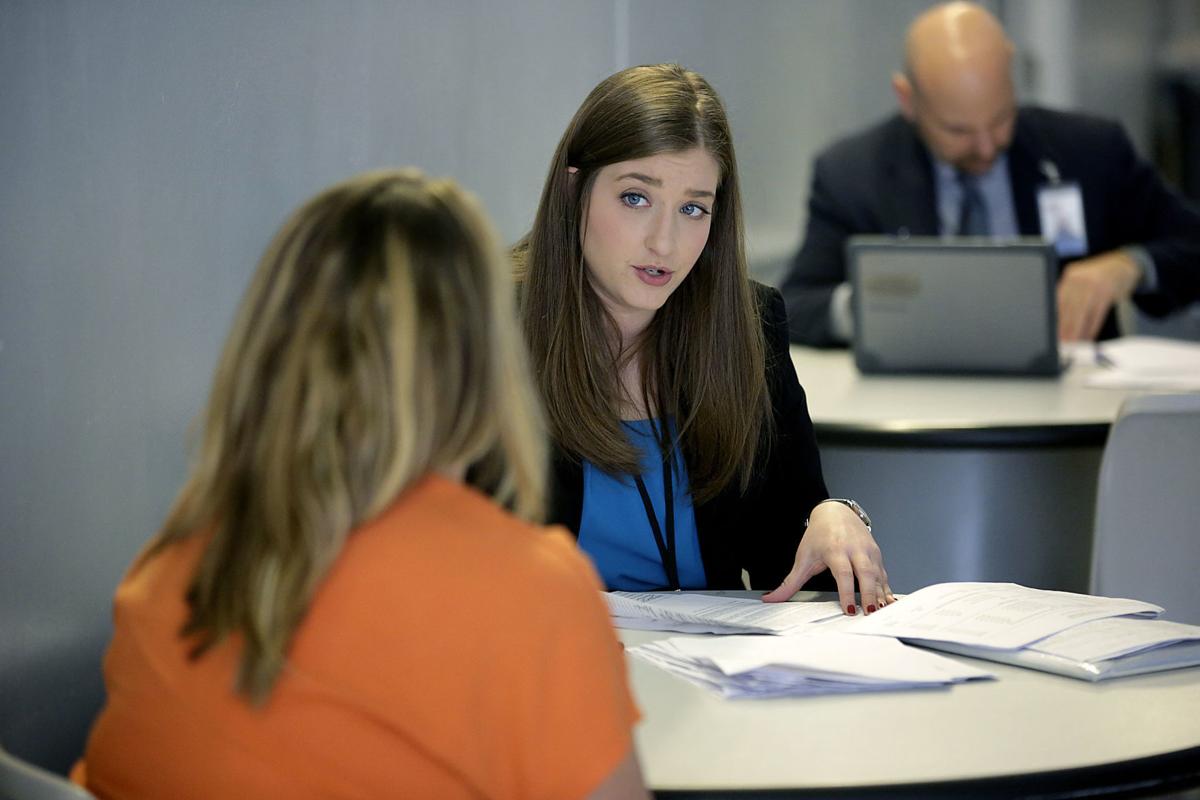 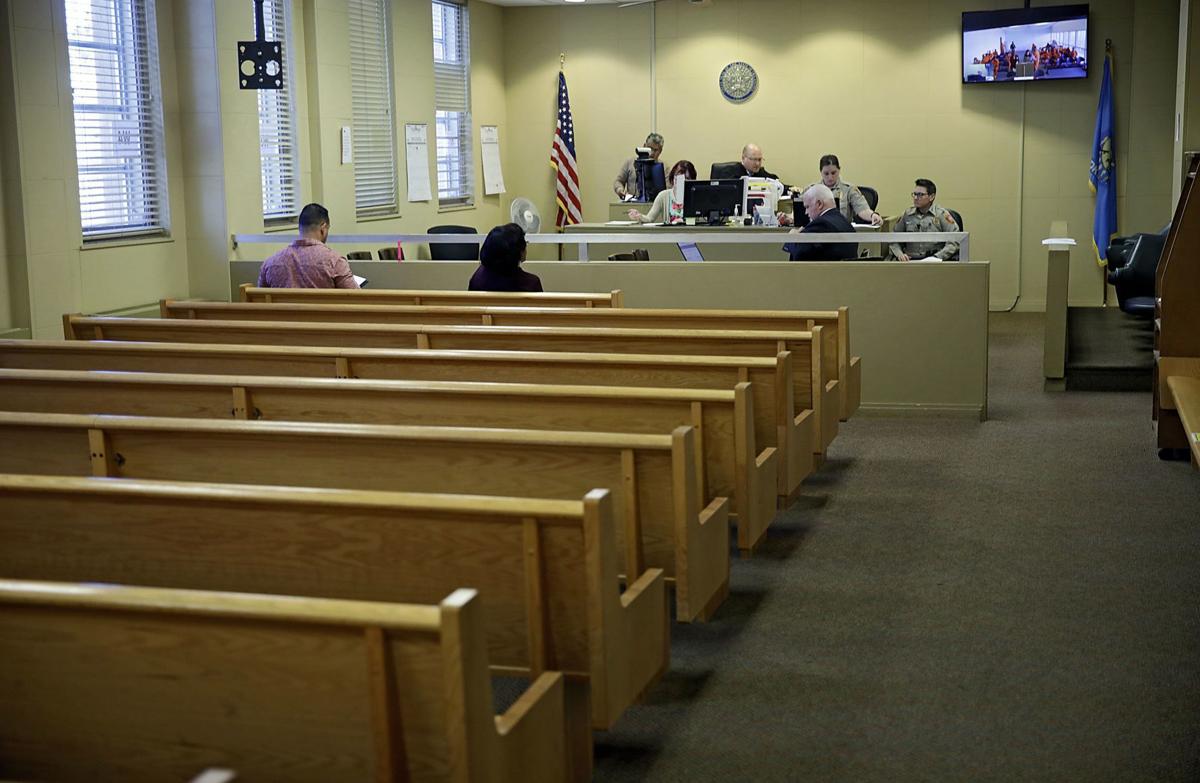 Fines, fees and court costs assessed to defendants have grown 27% since fiscal year 2007 as state and local government agencies have become increasingly reliant upon them as a revenue source.

Read more of this Tulsa World story from last May 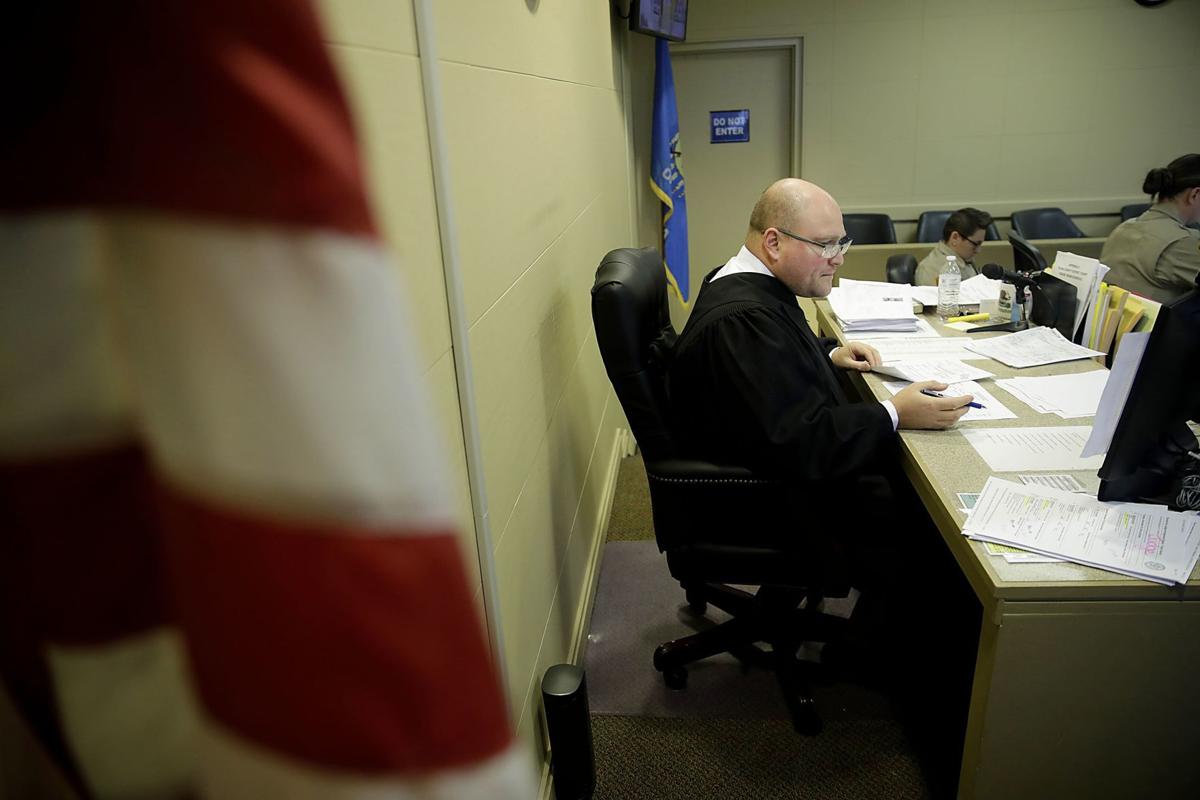 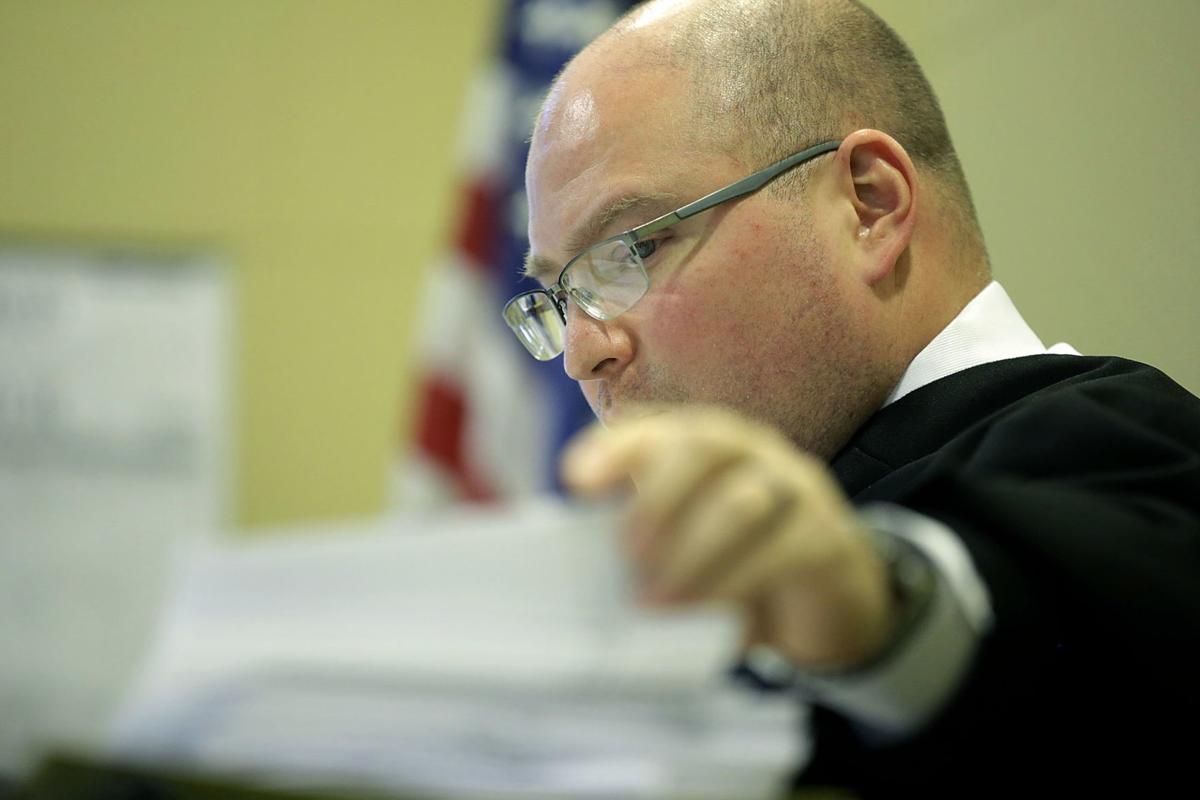 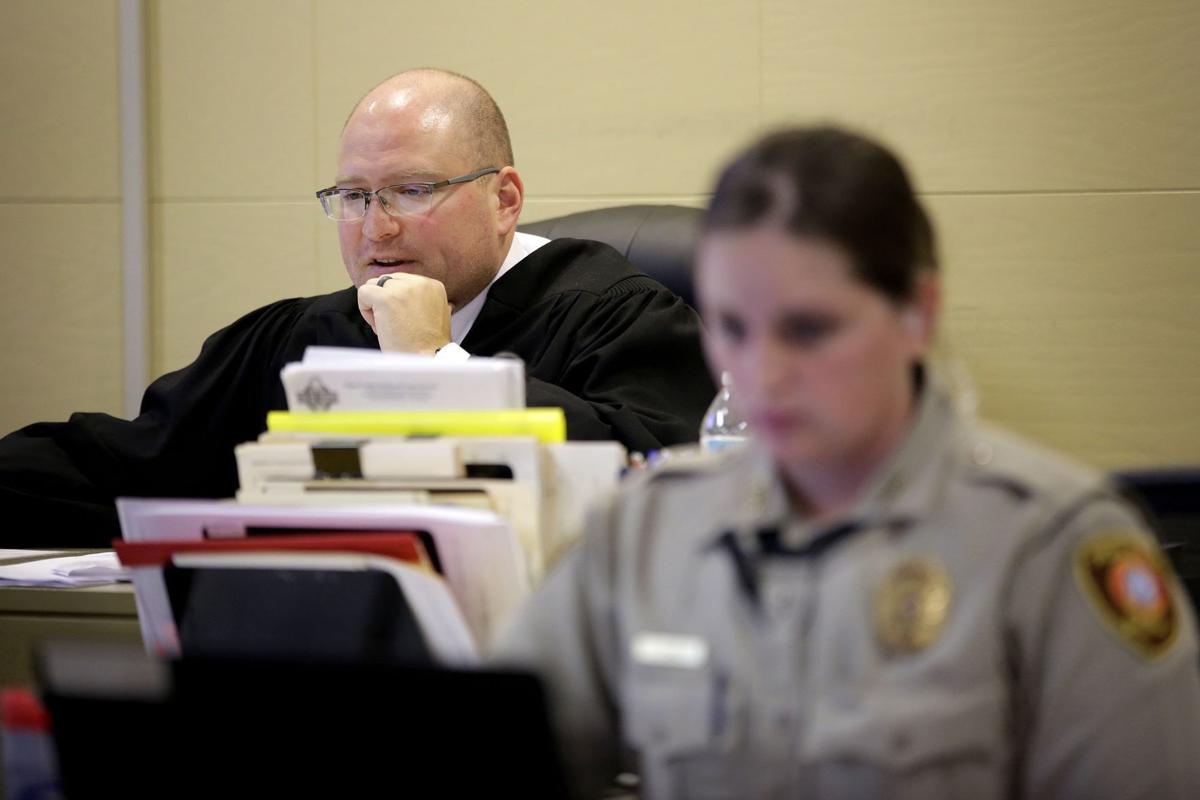 Inmates wait in the hallway to meet with attorneys before their video hearings at the Tulsa County jail in November. Tulsa County recently adopted a seven-day bail docket in an effort to cut down on time that eligible prisoners are kept in custody after arrests. MIKE SIMONS/Tulsa World

Fines, fees and court costs assessed to defendants have grown 27% since fiscal year 2007 as state and local government agencies have become increasingly reliant upon them as a revenue source.

Read more of this Tulsa World story from last May

Click here to find all parts of the Tulsa World's 'Cost of Justice' series.

As criticisms of cash bail mount across the country, some Oklahoma court systems are devising creative solutions to ensure inmates eligible for release aren’t wasting away awaiting a court date.

Thanks to a donated iPad, Washington County Associate District Judge Russell Vaclaw said he can perform weekend hearings with ease via Facetime, guaranteeing that inmates booked after the work week see a judge in less than 48 hours.

“I’ve done it in my pajamas on occasion,” he told the House Judicial Committee. “Makes it very easy.”

The system was one of many examples shared with legislators in search of a statewide solution during a House interim study to show how courts are individually working to address cash bail systems that critics say criminalize poverty. Opponents of the practice argue that keeping those accused of nonviolent crimes in jail because they can’t afford bond is more monetarily and socially costly than releasing them with a court date.

The study was held by the co-authors of Senate Bill 252, a bail reform measure introduced in the Oklahoma Legislature last session. The bill, which favors the release of arrested persons on personal recognizance bonds and requires courts to hold a bond hearing no later than 48 hours after an arrest, excluding weekends and holidays, passed in the Senate but stalled in the House.

Author Sen. Roger Thompson, R-Okemah, expects the bill to move forward in the upcoming session, and he pointed to Tulsa County’s practices as an example of what legislators are trying to do across the state.

The newly-expanded bond docket in Tulsa County runs seven days a week, as well as on holidays, ensuring every inmate appears before a judge for an individualized determination of bond within 24 hours.

The committee heard experts speak on the issue from all angles, and many who testified agreed that jails overcrowded with nonviolent inmates who can’t afford bail are costly to taxpayers, and the longer inmates sit in jail pretrial, the more likely they are to fail to appear in court or recidivate.

In an analysis of fiscal year 2018 data, Open Justice Oklahoma, a program of the Oklahoma Policy Institute, found bail practices vary widely from county to county.

“Where you’re arrested and where you’re booked into jail matters a whole lot on how long you’re going to stay there, how quickly your case is resolved and how ruined your life is going to become,” said Ryan Gentzler, director of Open Justice Oklahoma.

In eight of the 13 counties studied, the average time an inmate spent in jail pretrial was 26 days, Gentzler said.

“Twenty-six days is more than enough time to lose one’s job, fall behind on rent, be evicted, lose custody of their children, and on and on,” he told the committee. “Thousands of Oklahomans face this fate each year.”

It was for these reasons a national and local civil rights group jointly filed a federal lawsuit against Tulsa County in June 2018, alleging the county, Tulsa County Sheriff’s Office, 15 special judges and the presiding judge of the district court upheld an unconstitutional “wealth-based detention scheme.”

He said the national organization, Civil Rights Corp. of Washington, D.C., has been successful in similar suits in other states.

“My fear is this firm is going to repeat lawsuits in other counties across the state if we do not reform bail,” Brewster said.

‘There needs to be some help’

Seeing similarities in the practices that federal courts deemed unconstitutional and those of Tulsa County, officials moved forward with change.

A five-day bond docket was implemented in October 2018, and about a year later — in September — the docket was expanded to seven days.

The appearance is not a full-fledged hearing but a quick snapshot of a person’s ability to pay, the likelihood of appearance in court and the risk posed to the public.

Anywhere from a dozen to 50-plus freshly-booked inmates file into a room at the county jail every day to individually appear via video conference before Tulsa County District Court Special Judge David Guten.

Guten starts by reviewing their arrest reports to ensure there’s probable cause to hold them. Then it’s on to the alleged offenses and their histories. Are they accused of violent or nonviolent offenses? Do they have criminal histories? Do they have long-running records of failing to appear in court? Do they have ties to the community, like families or jobs? Are they likely to flee?

First-time offenders are likely to be assigned personal recognizance bonds, which release them on their word they will return to court, Guten said. Other situations, though, vary in complexity.

Bail is not meant to be punitive, Guten said, but only a means by which to ensure someone will come back to court to deal with the allegations. It will be returned at the resolution of the case.

Tulsa County has a bond schedule that lists preset bonds for certain crimes, which allows inmates who can pay to get out with a court date, but Guten assumes that inmates who appear before him couldn’t post that amount. So he starts the process by asking what they can afford.

Some honest souls answer him in the thousands, and others say they can’t afford anything. He listens to a representative from the Public Defender’s Office vouch for some inmates and considers resetting their bail amounts to figures they can afford or low enough to make them eligible for alternative programs. He also refers individuals who might be eligible to pretrial release programs through Tulsa County Court Services.

Both alternative paths post bail at no cost to the individuals and connect them to social services meant to ensure their return to court. That’s because, as Guten says, “There needs to be some help.”

Rusty Roberts, president of the Associated Bail Agents of Tulsa, said bondsmen do the same thing for their clients but at a cost to the client. It’s typically 10% of a person’s bail amount.

Uptrust clients have a failure to appear rate of 10% to 12%, Blake said, because they can communicate what they need to get to court.

Most failure-to-appear situations are not attributed to people purposefully shirking their responsibilities, Blake said. Those instances are most associated with forgetfulness, lack of child care or transportation issues.

“Just like anything else, people need a reminder,” Blake said.

“That’s a challenge,” he said.

Under Senate Bill 252, certain offenses would not be considered eligible for a bond setting, such as capital offenses and violent offenses.

But for inmates who don’t pose a threat to society, The Bail Project argues they should be booked and released.

“Why don’t we cite them and give them their day in court?” Cameron Pipe, a Tulsa client advocate, asked. “Why are we putting a monetary price on someone’s freedom?”

The nonprofit, which is committed to combating mass incarceration and the procedures that support it, exists in 17 jurisdictions and counting across the U.S. The Tulsa branch opened in January 2018.

Pipe said the organization uses a revolving fund of amassed donations to post bail for qualifying clients before connecting them to services in their community meant to ensure their return to court. When they return to court and their cases are resolved, the bail money returns to the revolving fund for the next client.

“By removing cash bail, we’re able to prove that people come back to court,” said Pipe.

Vaclaw, who also serves as president of the Oklahoma Judicial Conference, emphasized to the committee that rural counties differ greatly from the situations presented in Tulsa and Oklahoma counties.

“Being in smaller communities, we are held a little more accountable to the public,” Vaclaw said. “We will go to the soccer fields, the school, to church and see the victims, see the defendants, see the divorced party, whatever it may be. We see them, and we can feel that pressure, and I can tell you that when someone gets out on a bond no matter what we set it at and does something else, the heat comes back not on the DA, not on the police officer who made the arrest, but on the judge.”

Vaclaw said his rural system, as well as many others elsewhere, is working. But the burden of a bond docket like what Tulsa County is doing wouldn’t be possible without more funding.

“Legislation that may be driven by Oklahoma and Tulsa county issues does not always work with the Washington County issues or Nowata County,” Vaclaw said.