BROKEN ARROW — A service has been set for a Broken Arrow High School student who died in a head-on collision Friday.

Noah Schriner, 17, will be honored in a celebration of life at 1 p.m. Wednesday at Whispering Hills Church of Christ in Broken Arrow. Hayhurst Funeral Home is in charge of arrangements.

Schriner, a senior at BAHS, was a member of the Pride of Broken Arrow marching band, as well as the school’s symphonic band. He played both baritone and trombone.

“He loved the perfection and discipline being in the Pride demanded,” said his mother, Lorna Schriner.

“Noah saw himself as average, or even less than average, and always wanted to be better at what he was doing,” she said. “He really pushed himself. He was a perfectionist, almost to a fault.”

Schriner planned to attend the University of Tulsa this fall and major in chemical engineering. At the same time, he hoped to continue in music at TU.

“He was preparing his audition and wanted to be in the marching and concert bands,” his mother said.

Police identified Tracy Fulps, 51, as one driver. Schriner’s family confirmed that he was the other driver.

Both drivers, the only occupants of the vehicles, died at the scene, officers reported.

Schriner was an Eagle Scout and member of Boy Scouts Troop 930. He loved the outdoors and the camaraderie of Scouting.

Lorna Schriner said her son had many “crazy, varied interests” but that his faith was the most important to him. He loved his church, Whispering Hills, and was known as a person whose faith was genuine and expressed in his actions, she said.

From TU, Schriner had talked about going on to medical school and into medical research.

His constantly pushing himself “was something he and I had many talks about,” his mother said. “I told him to pace himself. Slow down a little.”

But that wasn’t his style, she said.

She said the family is grateful for the outpouring of prayers and support from the church and school communities.

“Noah was a real humble kid,” she said. “He’d really be shocked that he had this impact on others.”

Survivors include his parents, Ron and Lorna Schriner; a brother, Alex Schriner; and a sister, Lillian Schriner.

To plant a tree in memory of Broken Arrow as a living tribute, please visit Tribute Store.

Deepest sympathies to the family. Sounds like this was a loss not only to you, but to the world. He would have done great things. 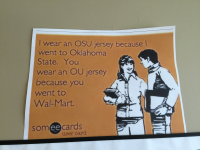 What a tragic event. My sympathy goes out to the family