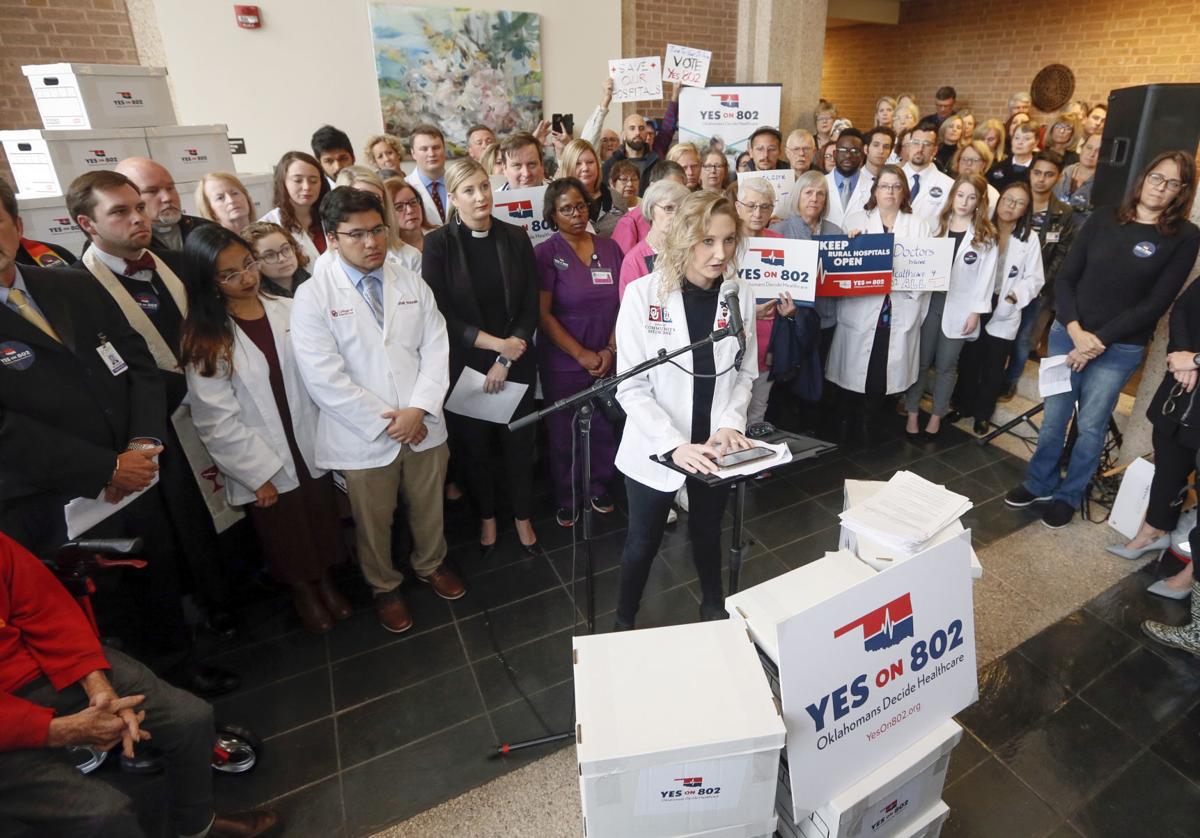 Ashton Gores, a medical student and volunteer with Yes on 802, speaks in front of Medicaid expansion supporters before they delivered petitions for state question 802 to the Oklahoma Secretary of State's office in Oklahoma City, Thursday, Oct. 24, 2019. [Nate Billings/The Oklahoman] 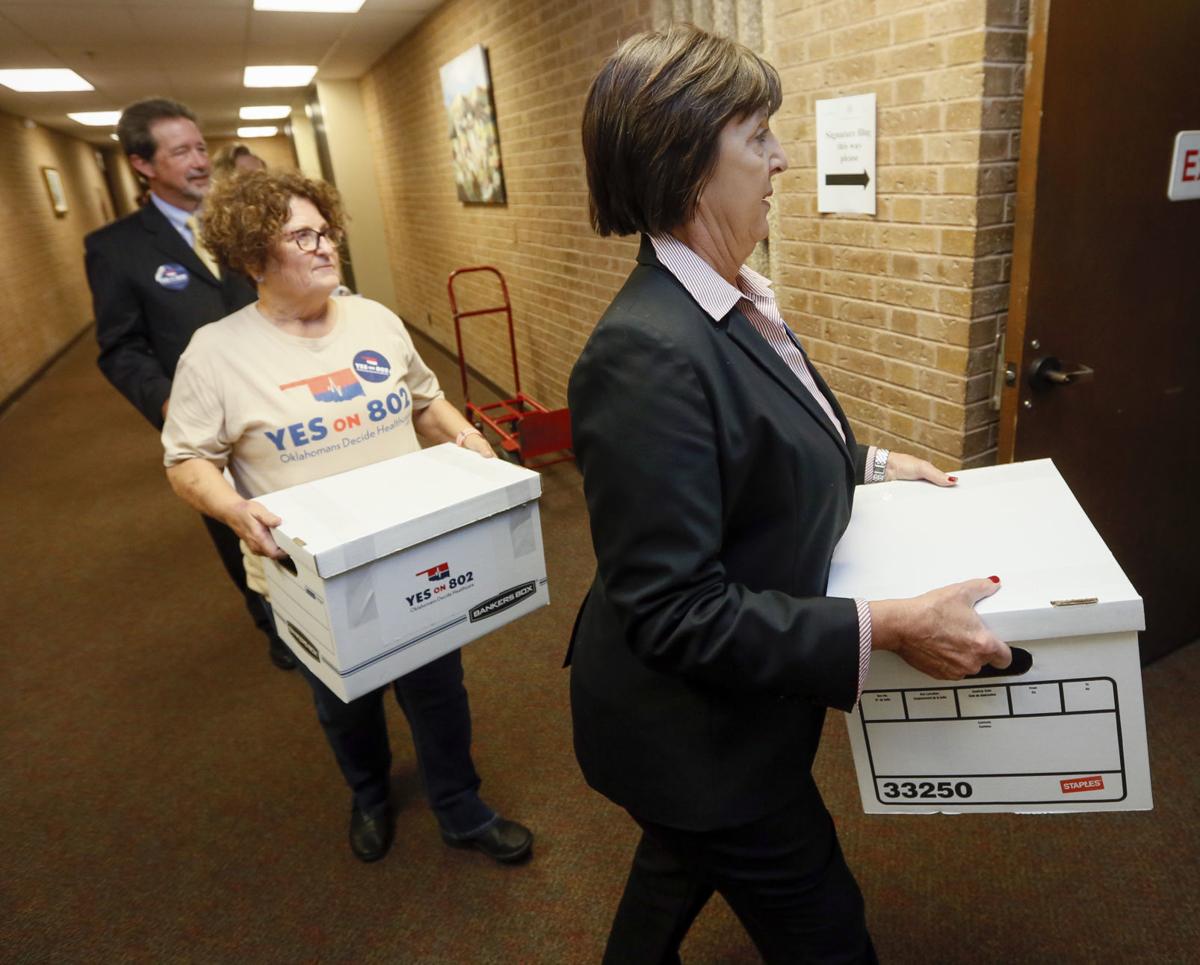 Patti Davis, president of the Oklahoma Hospital Association, leads supporters of Yes on 802 as they deliver petitions to the Oklahoma Secretary of State’s Office in Oklahoma City on Oct. 24. NATE BILLINGS/The Oklahoman 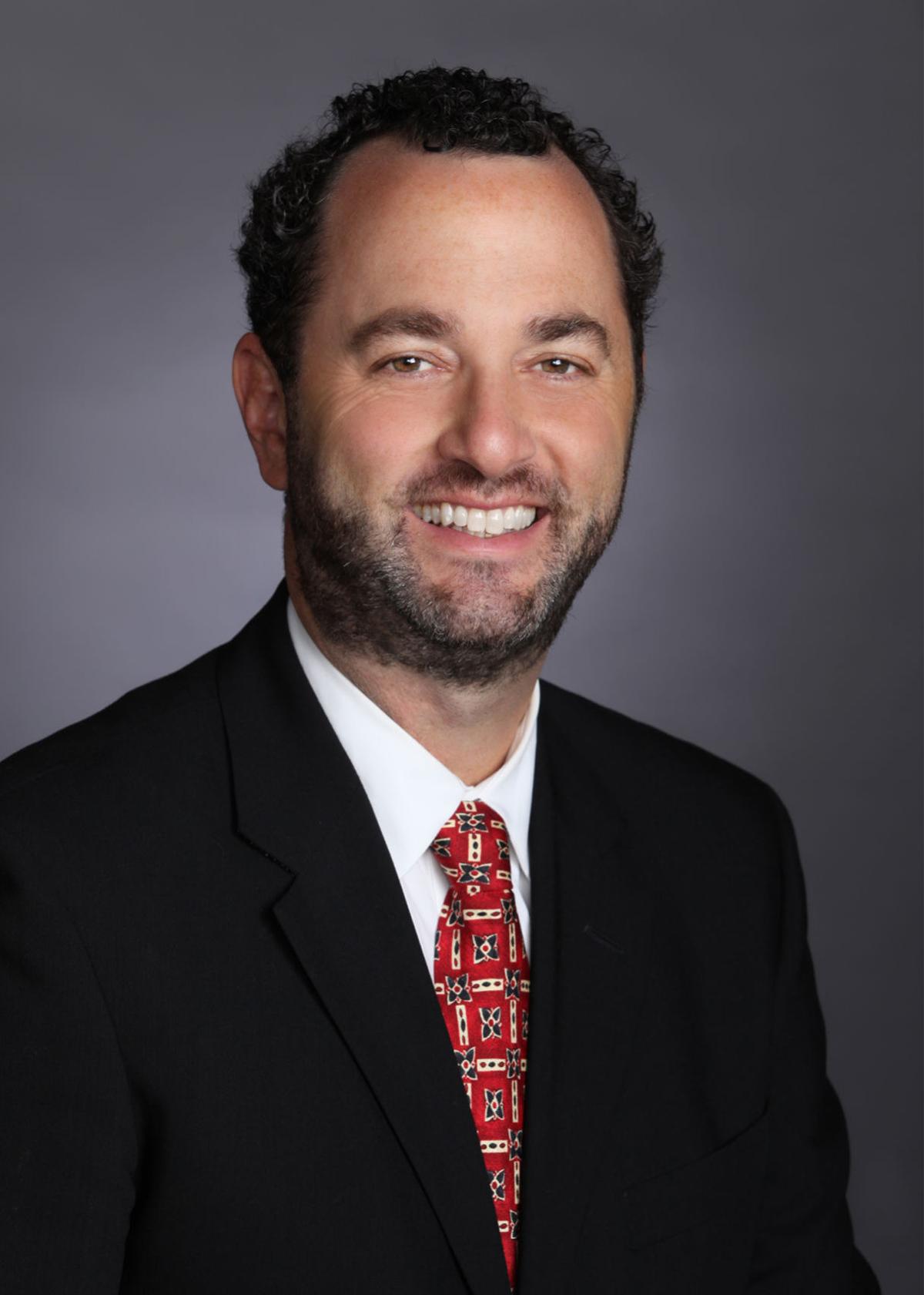 Ashton Gores, a medical student and volunteer with Yes on 802, speaks in front of Medicaid expansion supporters before they delivered petitions for state question 802 to the Oklahoma Secretary of State's office in Oklahoma City, Thursday, Oct. 24, 2019. [Nate Billings/The Oklahoman]

Patti Davis, president of the Oklahoma Hospital Association, leads supporters of Yes on 802 as they deliver petitions to the Oklahoma Secretary of State’s Office in Oklahoma City on Oct. 24. NATE BILLINGS/The Oklahoman

As we navigate uncharted waters with the COVID-19 global pandemic, other news is understandably getting buried.

For instance, Oklahomans may have missed that Gov. Kevin Stitt earlier this month directed the state Medicaid agency, the Oklahoma Health Care Authority, to alter dramatically health care in our state.

Even though he has yet to set an election for State Question 802 that calls for full Medicaid expansion, Gov. Stitt applied to the federal government to expand SoonerCare coverage effective July 1 of this year.

At the same time Oklahoma seeks to expand this care, the governor directed state Medicaid officials to apply for a federal waiver that would restrict SoonerCare coverage using barriers such as work requirements, premiums and copayments.

Overtaken by the COVID-19 pandemic news cycle, the proposal was unveiled to the public on March 16, which started a required 30-day comment period.

If you missed any of this news, you could be forgiven. You were probably worrying about your job, or figuring out how to socially distance, provide for your family and stay sane (all at the same time!).

While Oklahomans increasingly turned their focus to dealing with the pandemic, the Stitt administration has insisted on staying the course on the meager 30-day public comment period.

As a physician and an Oklahoma Policy Institute board member, I support full Medicaid expansion in Oklahoma because it represents the best health care opportunity for residents who otherwise can’t see a doctor or even fill a prescription.

Medicaid coverage became a national patchwork following a 2012 U.S. Supreme Court ruling. Subsequently, Oklahoma’s political leadership opted not to expand Medicaid to protect low-income, working-age adults without health insurance. By denying coverage to this group, Oklahoma maintains its dubious rank — tied for second place (behind only Texas) among states with the highest rate of uninsured.

First, and most importantly, his proposal mandates premiums, copays and work requirements on a population that already lives precariously. These restrictions are intended to start one year after they’ve enrolled in a health care program, with only income guidelines as a requirement. It’s a classic bait-and-switch.

Work requirements have been a disaster in every state that has tried them. There is no evidence that cost-sharing or work requirements lead to better health outcomes. On the other hand, there is plenty of data showing these requirements are barriers to people accessing care. Even $5 a month is onerous for those whose income hovers around the poverty line.

Second, the governor’s plan attempts to sidestep the will of 311,000 Oklahomans who voiced a collective desire to have full Medicaid expansion placed on the state ballot and enshrined in our state Constitution when they signed SQ 802. The governor should respect his constituents and set an election date for SQ 802.

Third, sticking to the 30-day comment period unnecessarily rushes a process that will introduce massive changes in our state’s health care system and finances. Considering the governor could magnanimously decide to expand SoonerCare tomorrow, his administration could at the very least better allow the public to weigh in by extending the comment period beyond the bare minimum of 30 days.

Lastly, with all of us frightened about the coronavirus pandemic, it would be enlightened to enact coverage that will protect fellow Oklahomans from health care sticker shock. The uninsured are our most vulnerable in that regard.

When Oklahomans are no longer in collective survival mode, perhaps we can then more closely consider the governor’s Medicaid expansion proposal. Until then, we urge Oklahomans to contact the governor’s office and ask him to suspend his proposal altogether or at least extend the current comment period until after this national health crisis has subsided.

Dr. John Schumann practices internal medicine and serves on the Oklahoma Policy Institute board of directors.

Wayne is the editorial pages editor of the Tulsa World and a political columnist. A fourth-generation Oklahoman, he previously served as the World’s city editor for 13 years and as a reporter at the state Capitol of four years. Phone: 918-581-8308