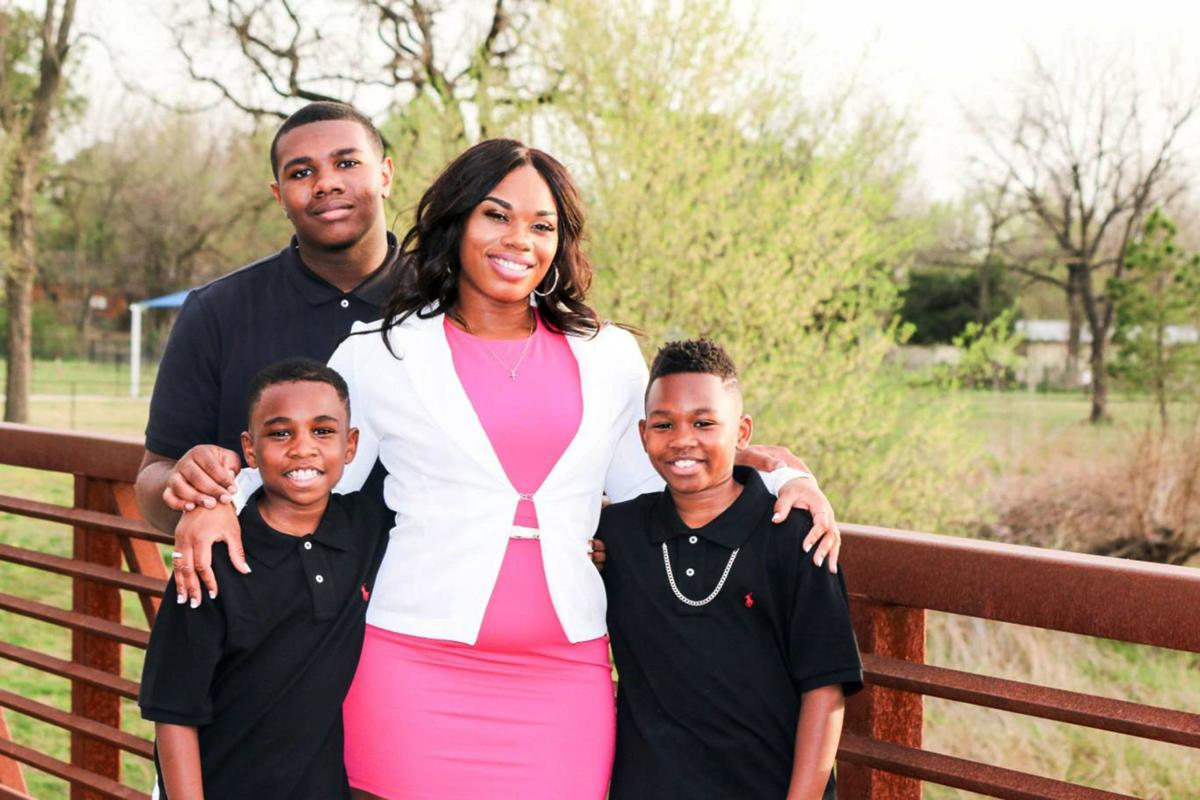 Whitney Landrum has raised three children — William Landrum (behind her) Marcellase Hill (left) and Ge’Vauri Hill (right) — while dealing with poverty and graduating from college. 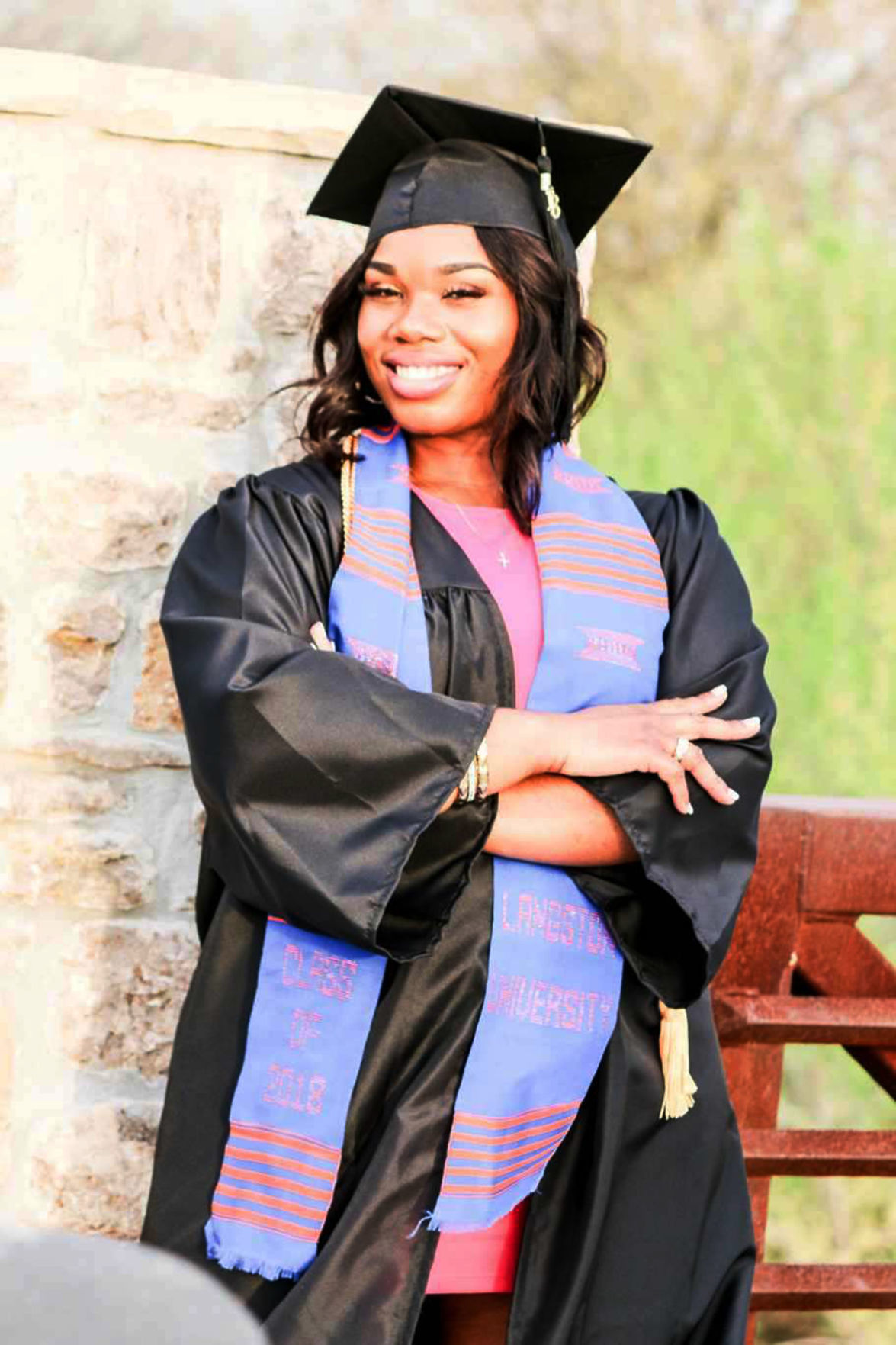 Whitney Landrum overcame poverty to graduate from Langston University with a nursing degree.

Whitney Landrum has raised three children — William Landrum (behind her) Marcellase Hill (left) and Ge’Vauri Hill (right) — while dealing with poverty and graduating from college.

Whitney Landrum overcame poverty to graduate from Langston University with a nursing degree.

As Whitney Landrum finished reading a short narrative of her life, people were wiping away tears.

It was during a regular board meeting of the Tulsa Housing Authority, and that’s a hard group to make emotional. They have heard a lot of hardship stories and nothing shocks them.

“I was 13 years old holding my baby boy in my arms,” she said. “On that day, I vowed to knock down barriers and become the best person I could be, for the sake of my son.”

The ending was a college degree, homeownership and a thank you for the support and social programs that got her there.

“Everything I went through was hard, but it was doable,” Landrum told me later. “As long as you put your mind to it, stay focused and stay determined, you can come out on top.

Oklahoma has the highest number of children with three or more adverse childhood experiences, which increase the likelihood of a host of adult problems from poverty to health problems.

As negative experiences pile up, they have a way of reaching into future generations if interventions aren’t successful.

Landrum faced it down with government safety net problems, a handful of consistent cheerleaders and an innate grit, intellect and drive.

As a child, Landrum said she was molested, but no one took action to report the crime or believe her version.

“My mind was blown, and I didn’t know what to do, so I basically turned into a wild child,” she said.

By middle school, Landrum was living with an aunt and had received no sex education and did not have access to contraception. A school accident led to an emergency room visit and test revealing she was six months pregnant.

She was a 7th grader, and the father was an 8th grader. He would later have nine more children, Landrum said.

“It was shocking, and I didn’t know what to do,” she said. “As the months went on, I was by myself and scared. What was I going to do next?”

A school counselor, Paige Pulscher, became like a second mother and helped enroll her in the former Margaret Hudson program for pregnant and teen mothers. She kept up with school work.

Landrum’s son was born on Aug. 21, 2001. By age 14, Landrum became an emancipated minor and moved into a THA property. She was not old enough to drive.

Child support remained non-existent because the father was a minor and without work. She received no financial support from family.

She doesn’t dwell on missing her adolescence and regular teenage milestones.

“I was determined to live a different life. Not doing teenage stuff did not faze me,” she said. “You have to do what is right for you and your child. That was my mindset. I wanted better for me and him. I knew I couldn’t be living like this.

“The stuff I saw out there is not the stuff you want your kids to see all their lives.”

About age 15, she received a Section 8 housing voucher to move into a rental home. By 18, she had finished high school as a certified nursing assistant from Tulsa Tech. She had also fallen in love with a man and started a years-long, but tumultuous, relationship.

The couple had a son and moved briefly to Las Vegas. Landrum returned 10 years ago alone with her two sons and pregnant with a third.

“I was back at square one.”

She was placed on a public housing waiting list and in the interim found a house with no heat or running water.

“We didn’t have any food. I was losing weight, stressed out and ended up getting abused,” she said.

Her oldest son’s aunt, Shavonne Harvey, welcomed her family into her home.

“If she wouldn’t have taken us in, I’m not sure what I would’ve done. She has been there for every milestone I have had. We have a close relationship,” Landrum said.

Two weeks after giving birth, she was working at a nursing home. She couldn’t afford to take a maternity leave.

The family secured a Section 8 voucher, and Landrum became a certified medical assistant from Central Tech in Sapulpa in 2010. At a public housing application renewal, she was told of THA’s Family Self Sufficiency program.

It’s a program funded through the U.S. Housing and Urban Development to assist families in getting off all welfare. Participants sign a five-year contract to reach an achievable goal.

An escrow account is established once participants increase their wages. That builds until they graduate from the program, and the participant gets the saved money.

This year, Landrum is one of 16 people graduating from the program.

“I had goals and ambition the whole time,” she said. “I was still out there fighting. It was about me getting to the point of separating myself from a lot of things going on.”

“It was me using my resources, but I was working two to three jobs. It was always a struggle. It was always something. I was done with it. I was ready to finish school and finish out my goals,” she said.

Nursing had been a dream since she cared for her aging grandmother.

“There were many times, especially during nursing school, when I was thinking I couldn’t continue and wanted to give up. There were many nights I cried because I still had to work full time, go to school full time and take care of my kids.”

That meant missing her kids’ school activities and having little to no downtime.

“I had many sleepless nights, but I knew in the end, it would be better for me and my kids,” she said. “The program worked because I knew I had that money growing for me. I couldn’t quit.”

After getting through Tulsa Community College, she went to Langston University and completed her bachelor’s degree in nursing.

While her story is inspiring, Landrum warns young girls about following that path.

“You hear people say they want to get pregnant to always feel loved. What I say is, ‘Yes, it’s an everlasting love, but it comes with a price. It comes with sacrifices’,” she said. “If you’re not built to change your lifestyle or push yourself more than if you had waited, then you are not prepared to have a child.”

That is the same advice she gives to older women.

“I see women my age getting pregnant then see them later in the same predicament, living off things instead of making things better. You are not only making it hard on yourself, but you are making it hard on your child, who is seeing that growing up,” she said. “Then, it makes them a statistic in life, and that’s not what you want for your kids.”

For more than a year, Landrum has been a home-health nurse and works in the intensive care unit at St. Francis Hospital. With that newly acquired escrow account, she is hunting for her first home.

She is off all public assistance and has extra savings for things like family vacations. Her oldest son is graduating this year with plans to major in English and theater in college.

“My kids missed out on me for so many years. Now, we are enjoying life and enjoying each other.”