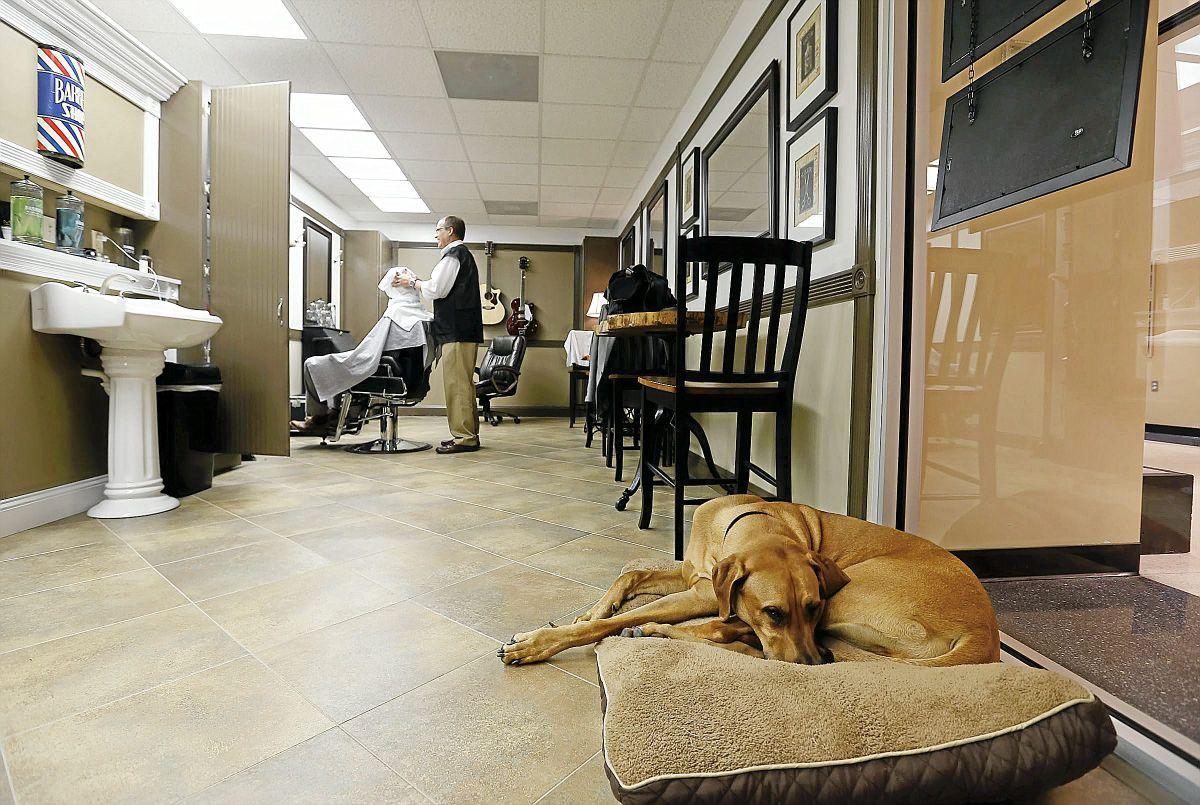 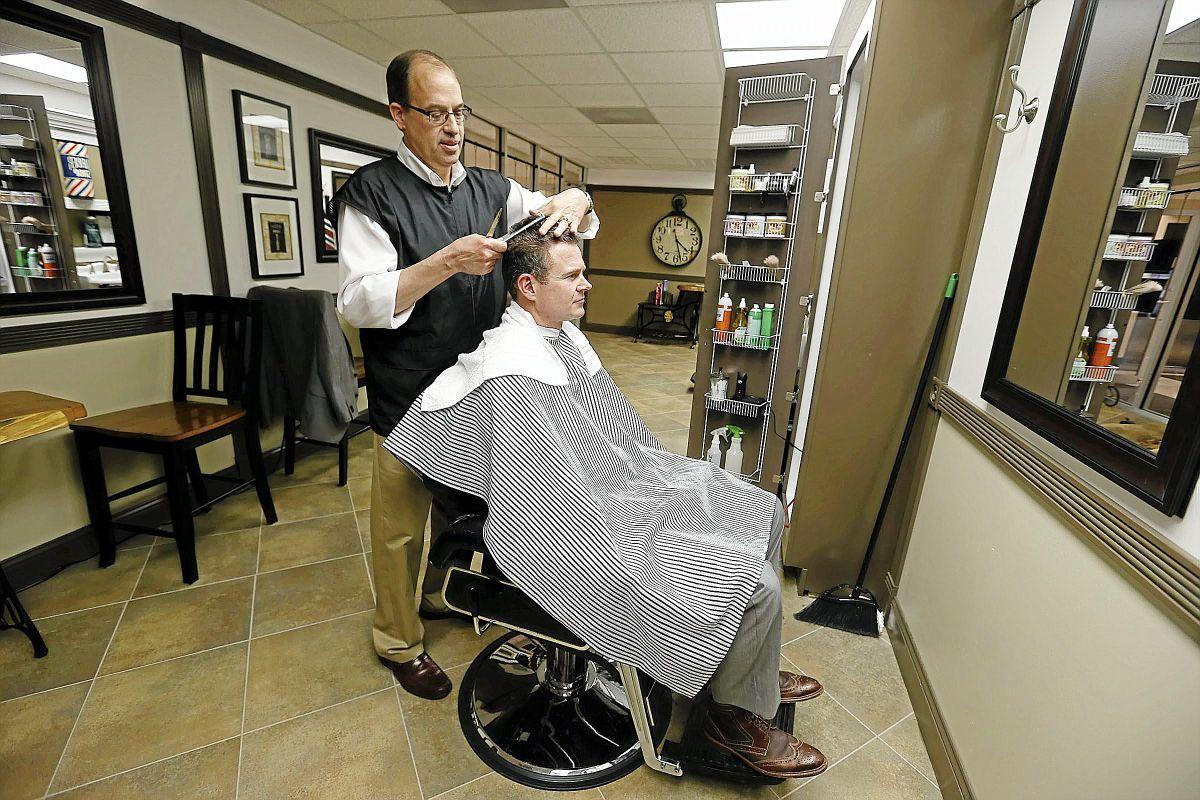 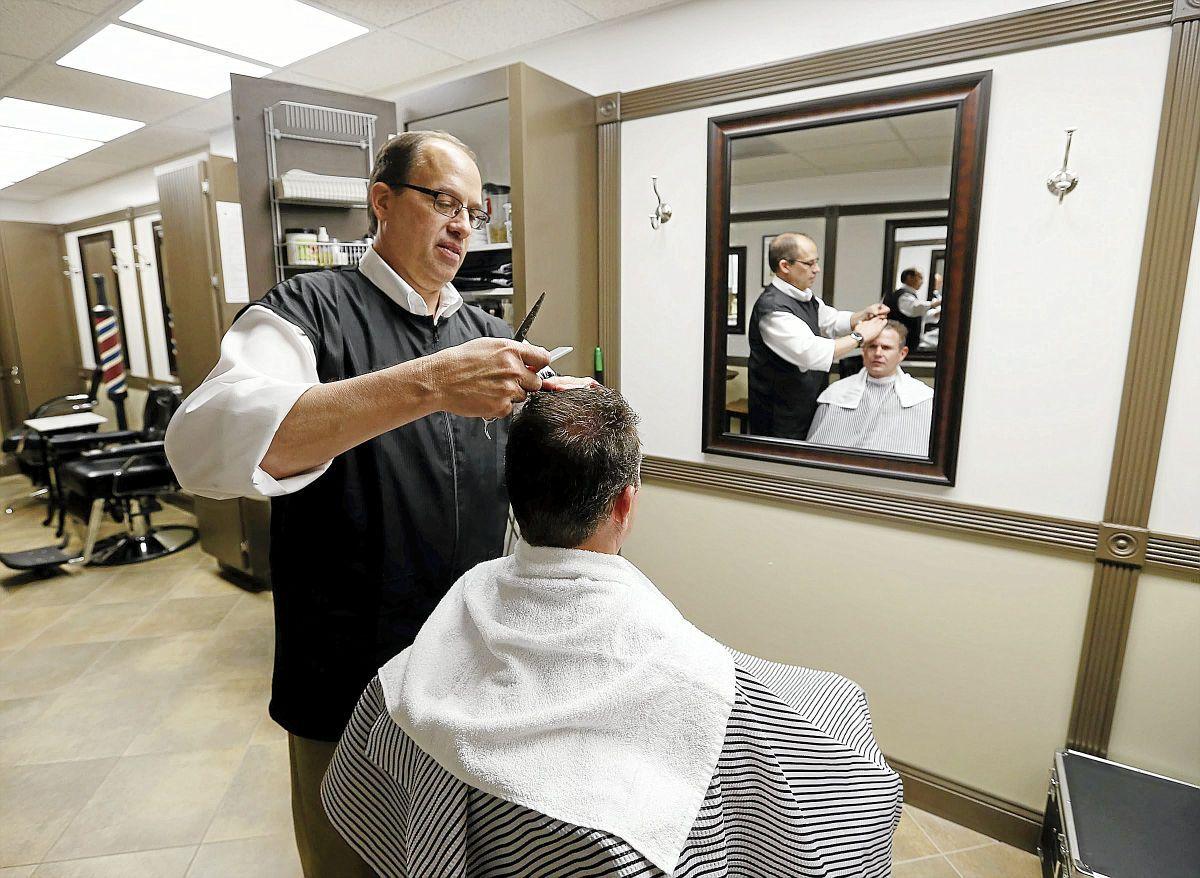 David Nienhuis cuts David Izett’s hair at Belvedere Barber Co. Nienhuis, who spent much of his working life in the construction industry, remodeled and refurbished the space himself.  STEPHEN PINGRY/Tulsa World 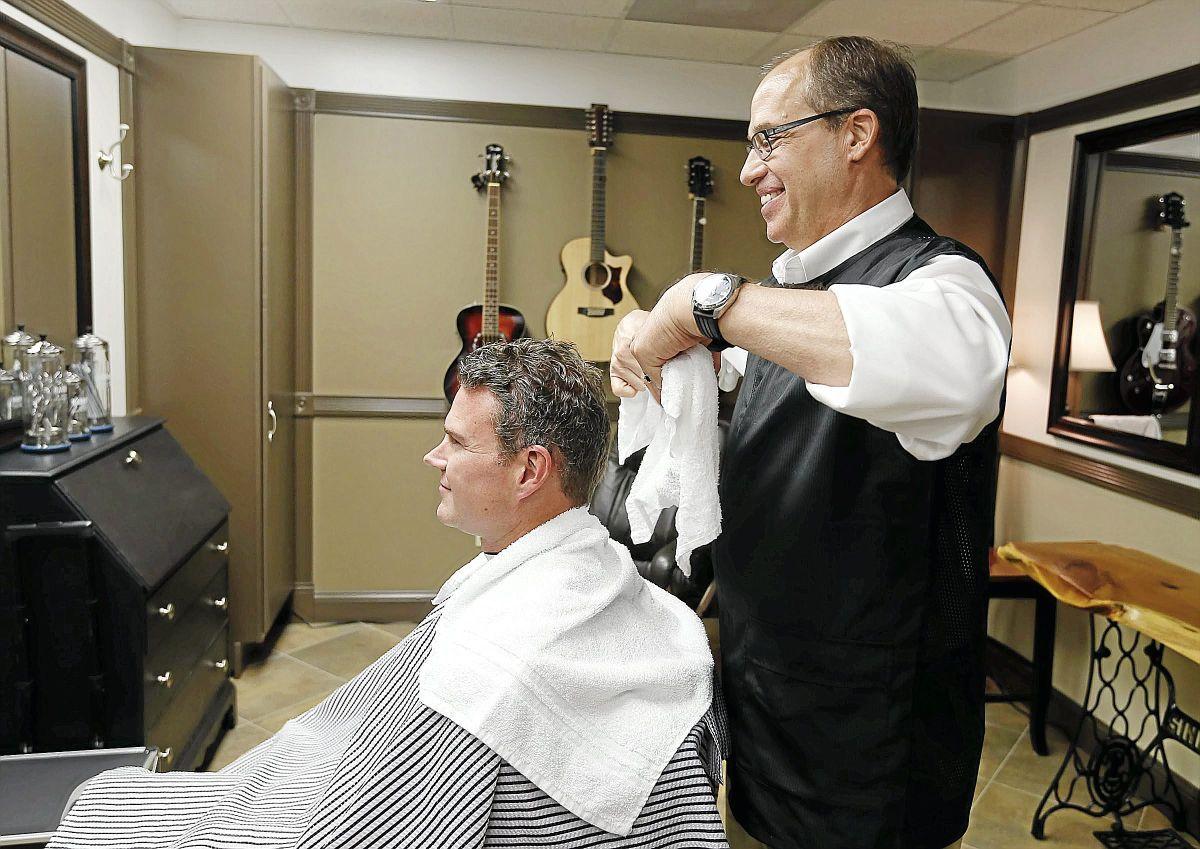 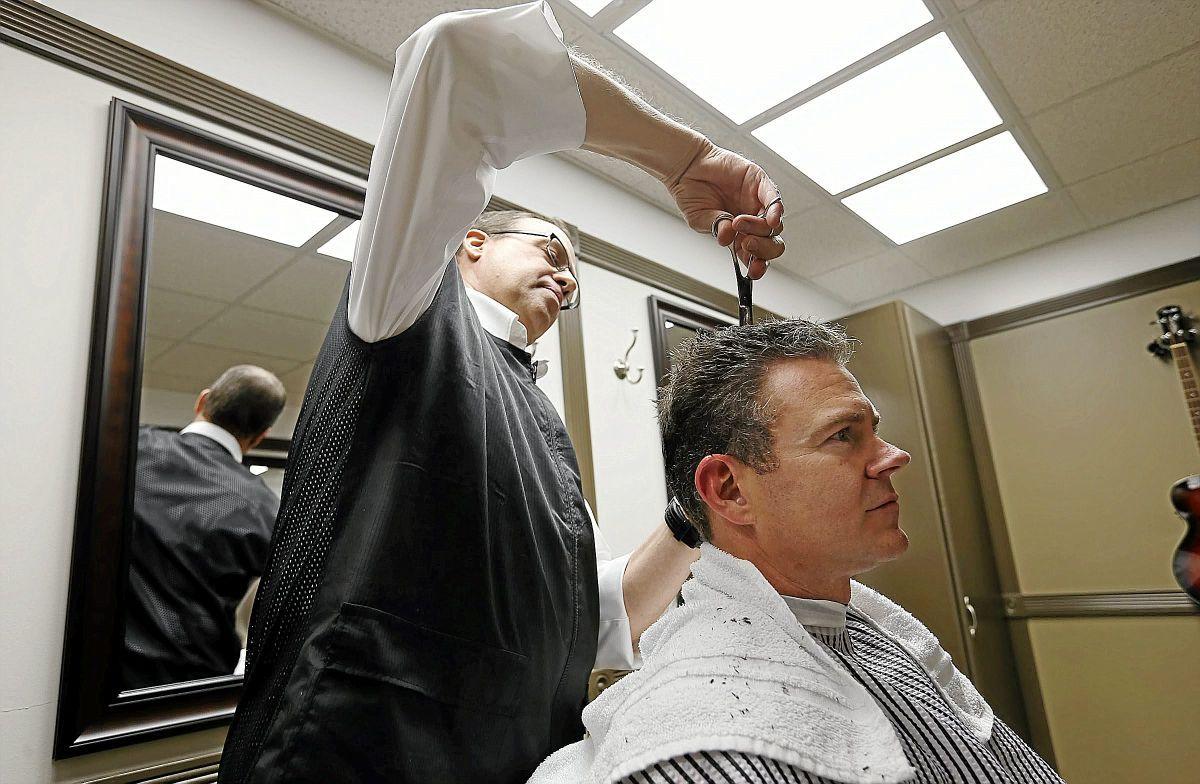 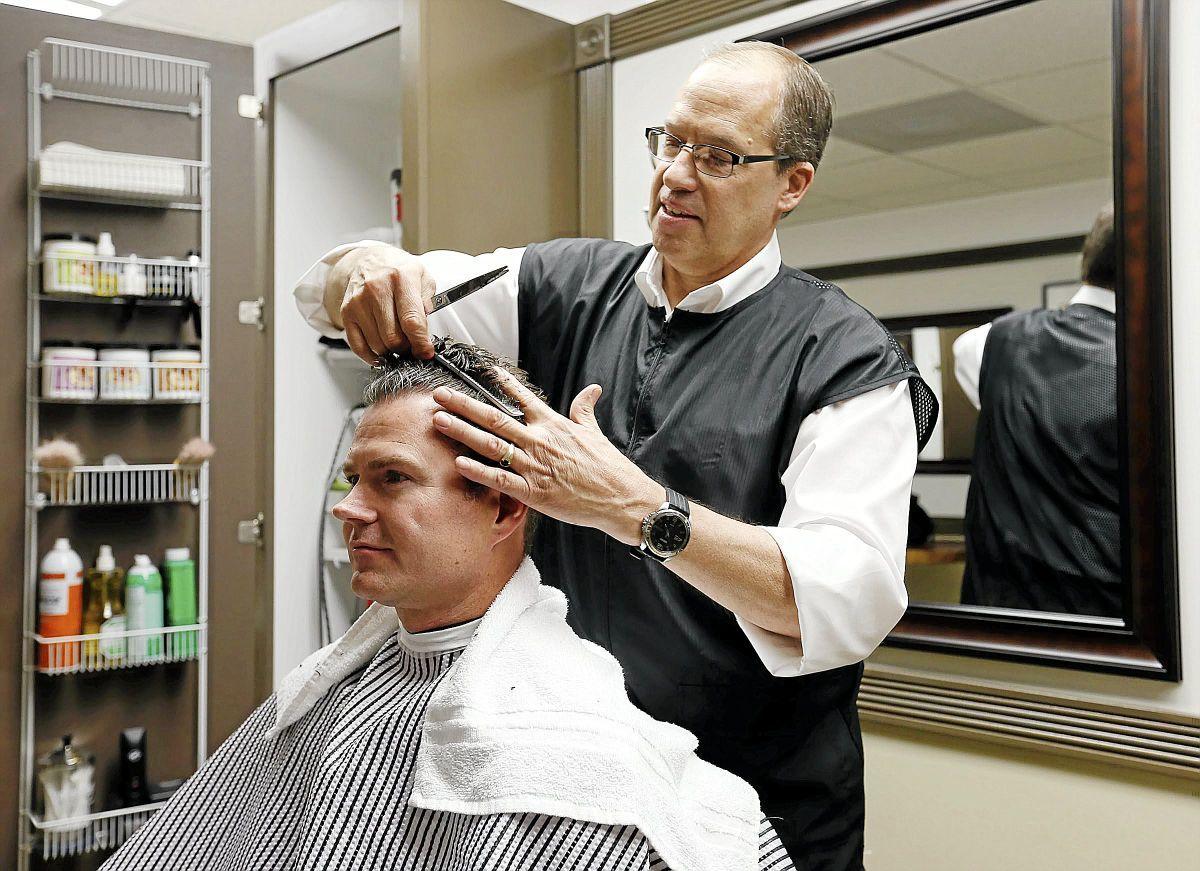 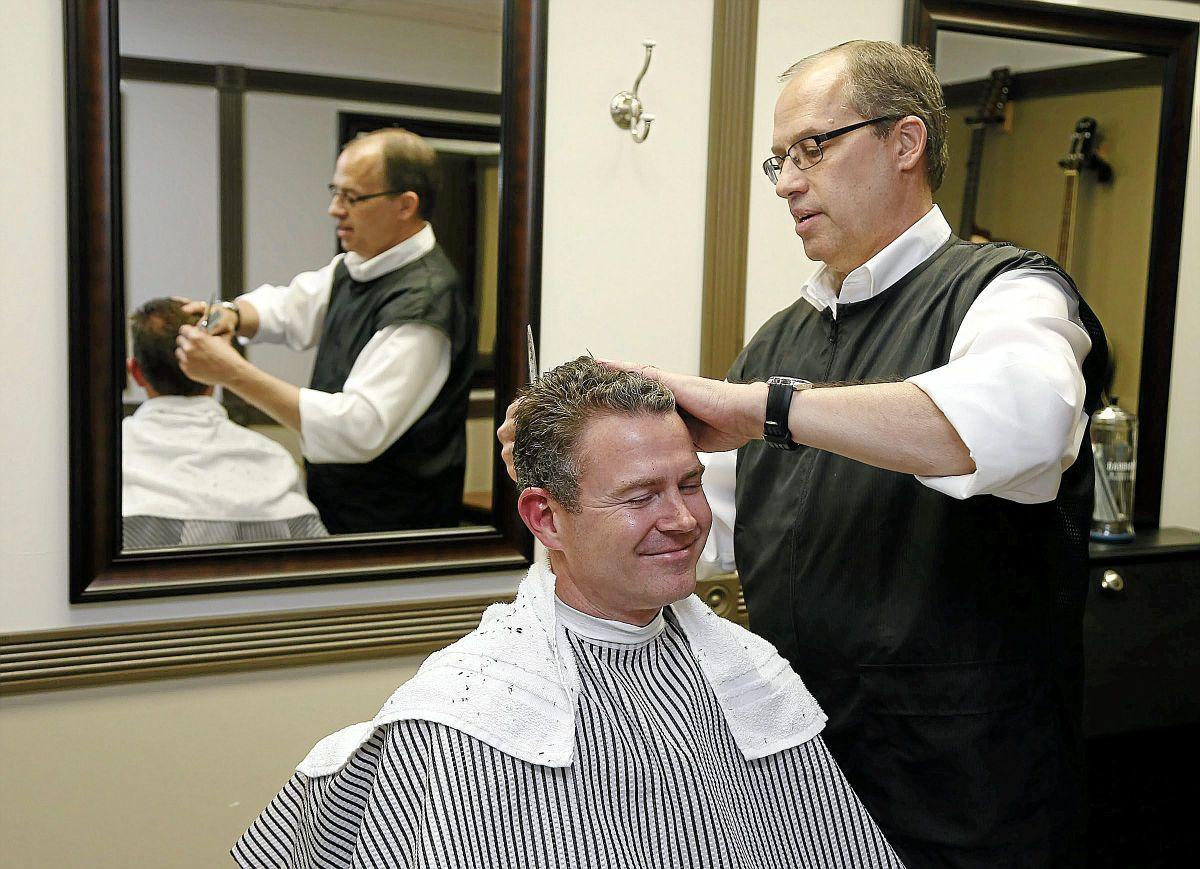 David Nienhuis cuts David Izett’s hair at Belvedere Barber Co. Nienhuis, who spent much of his working life in the construction industry, remodeled and refurbished the space himself.  STEPHEN PINGRY/Tulsa World

First of all: “Belvedere” is not the name of the dog.

Unless it’s time for this mix of Great Dane and Rhodesian ridgeback’s mid-afternoon nap.

A large, friendly dog might not be something one would expect to encounter at the local tonsorial parlor, but in most other aspects the Belvedere Barber Co. offers what Nienhuis promises on his business cards: “That Classic 1950s Experience” of visiting a neighborhood barbershop.

It occupies a small, narrow space in the lobby of the Main Park Plaza, 410 S. Main St., in downtown Tulsa. Situated directly across from the parking garage’s elevators, this area has had many incarnations over the years: a copier shop, a drop-off station for a dry-cleaning business and most recently a branch of the Rocky Mountain Chocolate Factory.

Nienhuis, who spent much of his working life in the construction industry, remodeled and refurbished the space himself, finding clever ways to make the most of the limited area, with instruments housed in neatly ordered narrow cabinets so the shop wouldn’t appear cramped or cluttered.

For decorations, Nienhuis brought some of the guitars he owns. Three adorn one wall: a Gretsch electric, a Martin 12-string and a Gibson acoustic-electric bass. When there’s a lull in business, Nienhuis may take one down and play a few tunes.

“When I was doing the remodeling, people told me I should put paper over the windows until I was finished,” Nienhuis said. “But I didn’t want that. For one thing, I figured people would think, if this guy can trim out a room, he probably could trim my hair.”

Nienhuis learned his barbering skills almost out of necessity — six of his seven children were boys, and he was responsible for all of their haircuts growing up. But the need to provide for a large family made it necessary to pursue something else as a profession.

Nienhuis owned Cedar Creek Builders in the 1990s, until a serious car accident resulted in some serious injuries.

“My neurologist said it would be better for me to ‘jettison all unnecessary stress,’ so I started working for other people,” he said.

But the dream of operating an old-fashioned barbershop never went away. With his wife’s encouragement, he started looking for a possible place to open a business.

One of those people is Rick Rutledge, who stopped by on a Thursday afternoon.

“I’ve been going to a shop on the other side of town, but it’s become something of a hassle to get there,” Rutledge said. “This morning, when I looked in the mirror, I told myself if I had a spare moment today, I’d stop by this place and see about getting a hair cut.”

As he settled into the chair, Rutledge said: “I see razors. Do you do shaves?”

“Indeed I do,” Nienhuis replied. After trimming Rutledge’s hair to the desired length and style (“finger-length on the top, no guard on the sides, squared off in the back”), Nienhuis brought out hot towels, shave cream and an old-fashioned straight razor.

He said: “You know what a rib-eye steak and a straight razor have in common? When either are brought out, every man in the room gets quiet.”

“I’ve got very sensitive skin,” he said, “and the only way for me to get a really good, close shave is with a straight razor.”

Straight-razor shaves and hot towel facial treatments are definitely part of the classic barbershop experience Nienhuis wants to re-create, there is another aspect of visiting a barbershop that is more important.

“I just remember when I was about 15 years old, I would ride my bike to the local barber in Flint, Michigan,” Nienhuis recalled. “One time, the barber gave me one of the best compliments I ever got in my life. The funny thing is, I can’t remember what he said — I just remember how I felt walking out of that shop.

“I realized that how you feel about yourself is one of the most important things, and anything that can give your sense of confidence a boost is a good thing,” he said. “If you’re able to give someone a little positive boost to how they think and feel about themselves from behind a barber chair, then you’re giving them a lot more than a haircut.”

And Trig, who had seemed to be fast asleep during all this, wagged his tail in agreement.