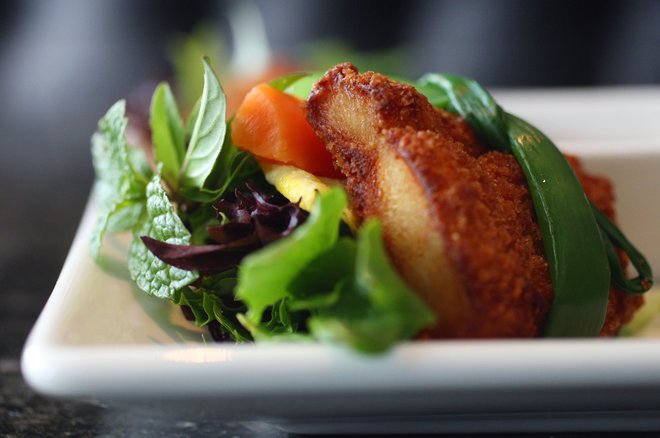 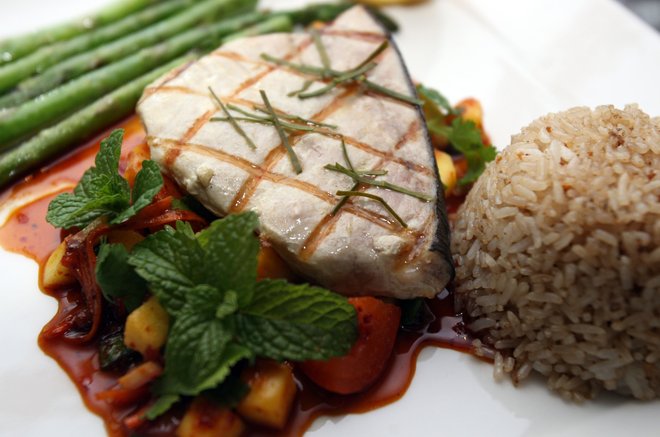 Grilled swordfish is served over a bed of sweet pepper mango sauce, one of five sauce choices available at Tropical. CORY YOUNG/Tulsa World

Grilled swordfish is served over a bed of sweet pepper mango sauce, one of five sauce choices available at Tropical. CORY YOUNG/Tulsa World

Tana Karnchanakphan said when his family purchased the building that formerly held Flyin' Roll, Rosie's Rib Joint and - for old-timers like myself - Chicken, Steak and Chocolate Cake, they weren't sure what they were going to do with it.

The family also owns one of the city's best-known Thai restaurants, Lanna Thai, on Memorial Drive.

"We debated about whether to lease it or do something with it ourselves," Karnchanakphan said. "We decided to do something ourselves. We knew we were losing our original restaurant (on 51st Street, because of the I-44 expansion), so then we had to decide to do another Lanna Thai or something different."

They chose the latter, and the result is Tropical, an upscale-casual restaurant with an Asian-inspired menu heavy on seafood and vegetarian fare. It also has a few meat dishes such as steak and duck.

Except for the basic footprint, customers of the former restaurants would not recognize the two dining areas of Tropical. They are sleek and refined, featuring 200-year-old stone reliefs and statues, large vessels, paintings of different grasses in shades of green, plantation shutters and granite tabletops and wood paneling from Brazil.

"My sister is an antique dealer and acquired some of the items from around the world," Karnchanakphan said.

We sat at a high-top in the 50-seat bar area because football games were showing on four of the five televisions there, and we were interested in a couple of them. Our server, Natalie, gave us the same attention we would expect to receive in the more spacious dining room.

With the grilled seafood entrees, diners receive a choice of sauce, one side and rice. My wife selected scallops ($17) with lemon butter sauce, basil fries and jasmine rice.

Big scallops can be dicey, with a narrow window between being overcooked or undercooked, but the five on this plate were perfect, cooked through but not rubbery. The sauce was extra-heavy on the lemon, and the rice was moist with a floral scent. Fresh basil cooked with standard fries proved to be a tasty combination.

We took the meat route with our other entree, a New York strip steak ($18) that came with grilled asparagus, fried corn cakes, russet potatoes and Thai steak sauce.

The 8-ounce steak was cut thin and had a couple of gristle spots but otherwise was tender and flavorful. The Thai sauce had a pleasant, sweet taste.

The five asparagus spears were thin and tender, and the two small corn cakes were filled with corn, green onion and spices, including a hint of cilantro. The four chunks of potato were a bit dry.

While we waited on our entrees we shared Tropical's signature appetizer, lettuce wraps ($8), as well as garlic edamame ($5).

A filling that included glass noodles, peanuts, crispy rice, mint, carrots, green onions and cilantro gave the wraps some interest, but the lettuce was cut in a flat fashion that made it difficult to form a wrap.

The menu said the edamame was tossed with roasted garlic and salt, but we could not detect any salt. I'm not a salt fan, but I think it would have enhanced the garlic in this case.

Desserts were memorable. Mango crisps ($5) included deep-fried mango slices sprinkled with powdered sugar over a pool of honey and served with real whipped cream. Sweet banana rice ($5) featured those two ingredients steamed together and served over a banana leaf with vanilla ice cream on the side.

The Tropical offers full bar service with a long list of specialty cocktails and about 80 wines, including some reasonably priced high-end selections.

Karnchanakphan said chef Renoo Jansala, whose husband is vegan, will be cultivating a herb and vegetable garden next to the restaurant, both outside and in a greenhouse.