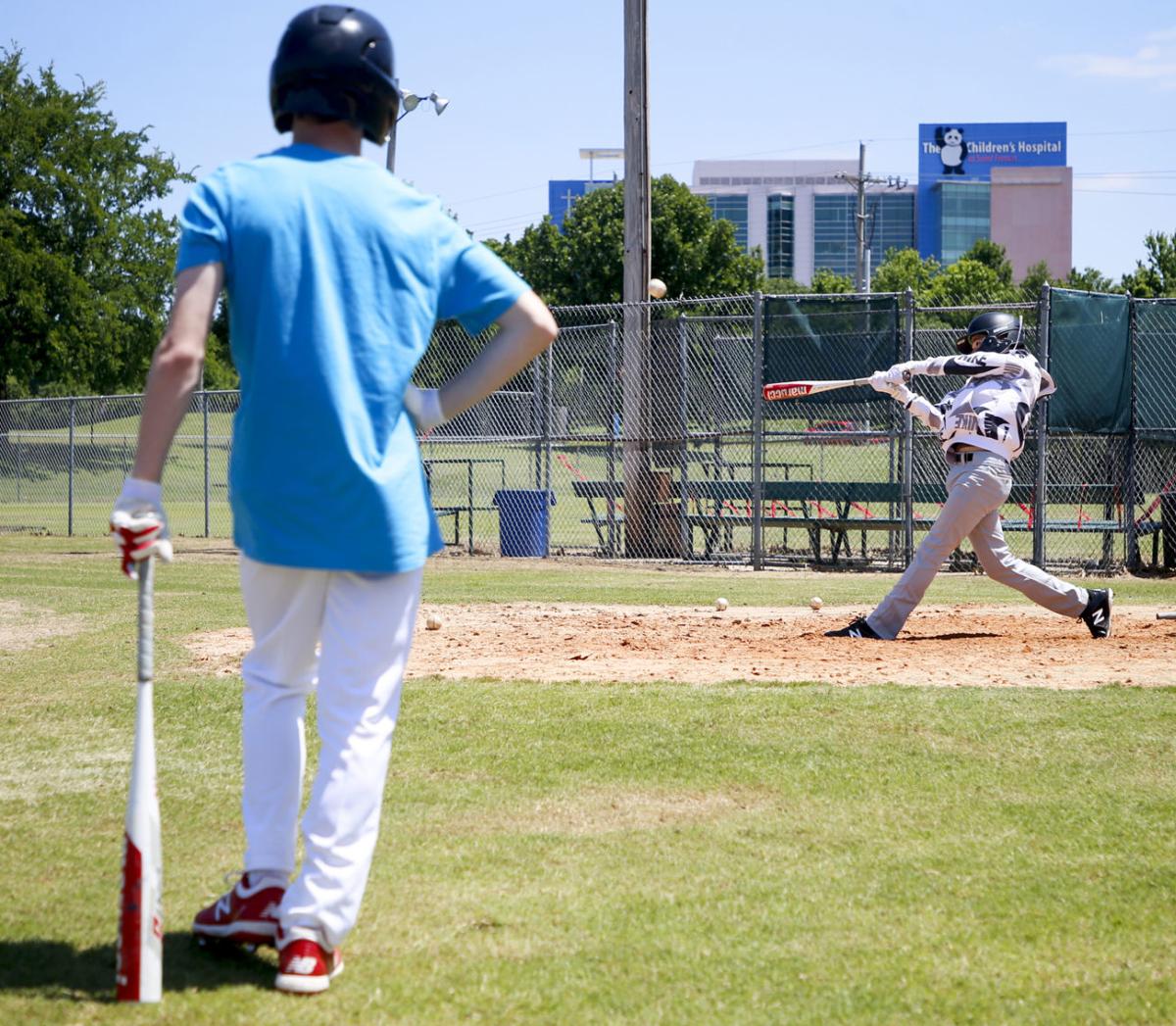 Bode Cairl watches Oklahoma Bulls teammate Brock Bales take batting practice Tuesday at LaFortune Park. The playing of organized sports was approved by the governor, so Oklahoma youth teams are getting a late start with their seasons. IAN MAULE/Tulsa World 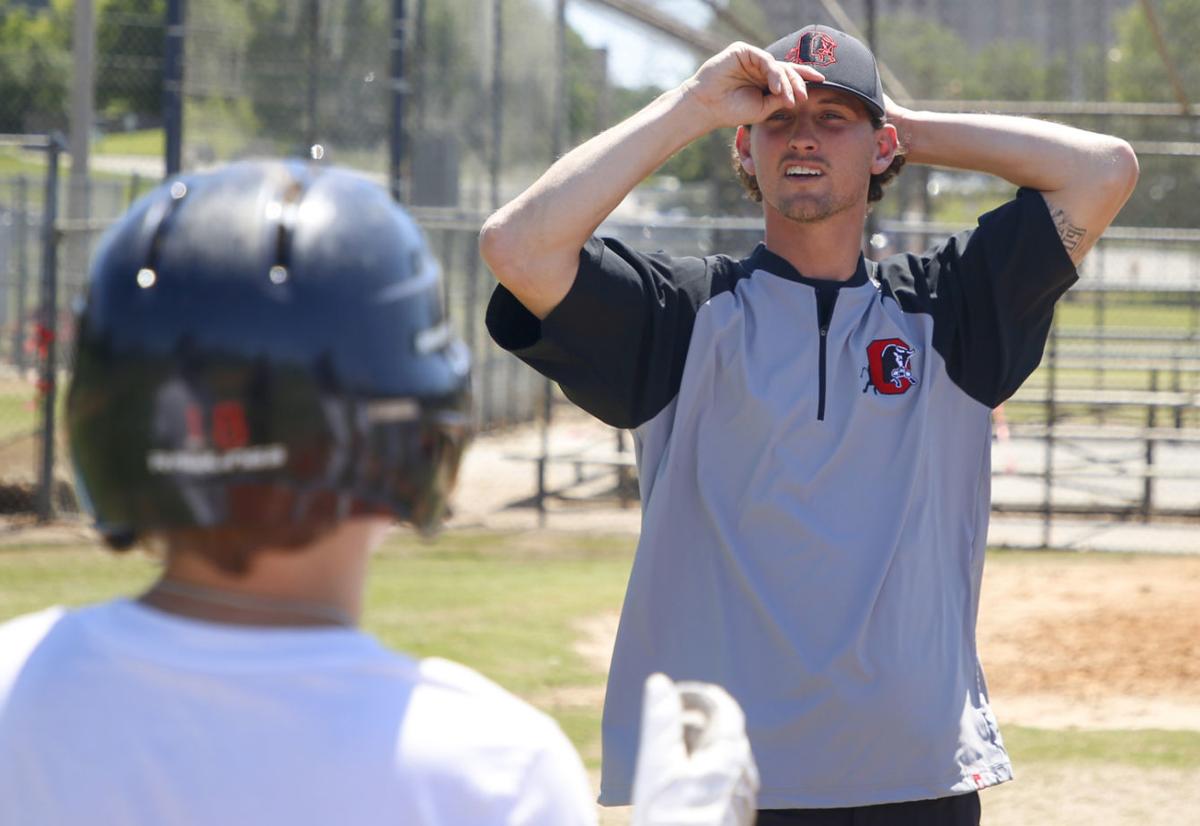 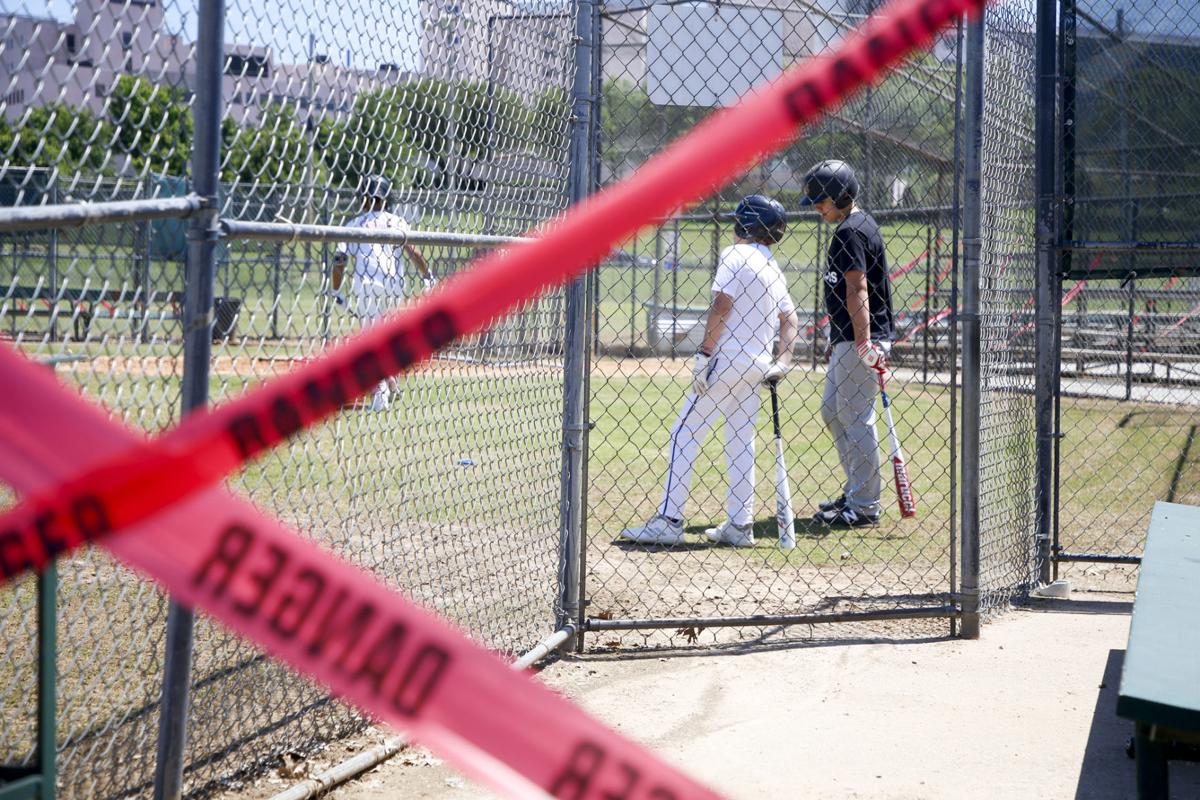 The Oklahoma Bulls’ Brock Bales and Bryson Kelley wait to take batting practice Tuesday at LaFortune Park, where ball fields had been closed because of COVID-19. IAN MAULE/Tulsa World 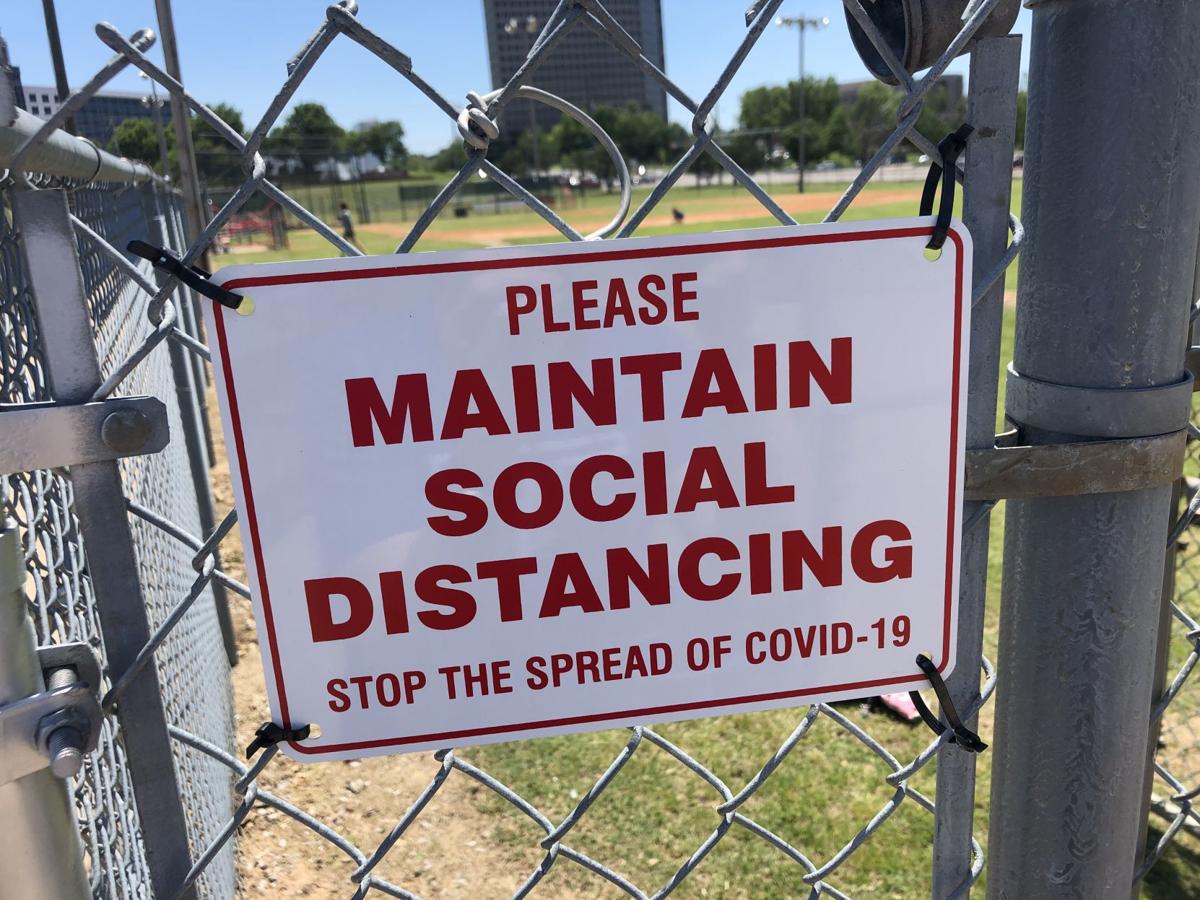 A sign of the times at the Tulsa Little League complex at 61st Street and Yale Avenue. BILL HAISTEN/Tulsa World 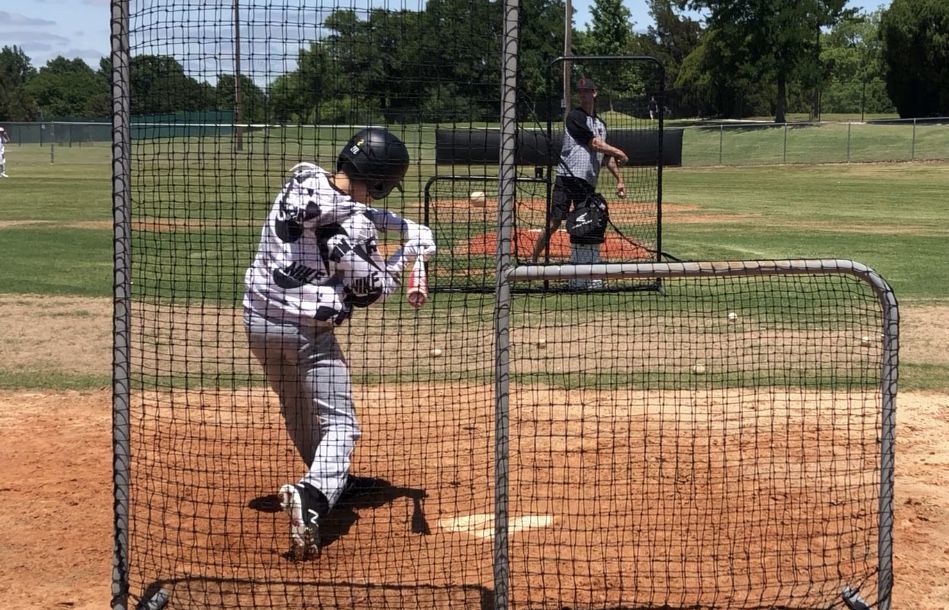 Bode Cairl watches Oklahoma Bulls teammate Brock Bales take batting practice Tuesday at LaFortune Park. The playing of organized sports was approved by the governor, so Oklahoma youth teams are getting a late start with their seasons. IAN MAULE/Tulsa World

The Oklahoma Bulls’ Brock Bales and Bryson Kelley wait to take batting practice Tuesday at LaFortune Park, where ball fields had been closed because of COVID-19. IAN MAULE/Tulsa World

A sign of the times at the Tulsa Little League complex at 61st Street and Yale Avenue. BILL HAISTEN/Tulsa World

When fire touches the fuse of a bottle rocket, the reaction isn’t gradual.

Within the Oklahoma baseball community, there was a comparable response when Gov. Kevin Stitt made this announcement: “Organized sports activities can reopen and operate under proper social distancing and sanitation protocols.”

Last weekend, there were a few youth baseball tournaments around the state. There would have been more if not for rain-soaked fields.

This weekend, look out.

About 2½ months after the typical start time of youth sports events, baseball now is happening all over Oklahoma. Ours is among the first states to go, and it’s not a gradual go.

At the Jenks Youth Baseball complex, a weekend tournament is sanctioned by the northeast Oklahoma chapter of the United States Specialty Sports Association (USSSA). It involves kids ages 6 through 13.

In any other year not impacted by a health crisis, a tournament like this might have 60 teams. This weekend, there are 98 teams from Oklahoma, Texas, Kansas, Arkansas and Missouri.

After the registration deadline, tournament director Lynn Gibson had to say no to coaches of teams from Atlanta and Dayton, Ohio.

As most states haven’t yet approved the resumption of organized competition, and because so many young athletes and their families are so desperately ready for baseball, Jenks during the Memorial Day weekend is among the nation’s hotter spots for youth baseball.

“We want this to be as safe as possible for kiddos to get back to playing,” said Gibson, a USSSA assistant state director who has coordinated youth tournaments for 36 years. “We’ve been planning this for a couple of months. We bought as much sanitizer as we could.

“Umpires are ready to go, too. They didn’t get to do high school games this year. They’re as ready to work as the players are ready to play.”

In Jenks, the sharing of equipment is not allowed.

No cash will be accepted at the gate. Each team collects admission money from its parents and then presents a gate-fee check to tournament organizers.

At the concession stands, there will be no hot food. No hot dogs. Fans may snack on pre-packaged items like chips and candy.

Each dugout is outfitted with sanitizers. Bleachers and dugouts are scrubbed with disinfectant before every game.

Bleachers are to be used only by coaches, players and scorekeepers. Spectators are encouraged to bring their own chairs and to sit around the exterior of the field. Distancing practices are recommended.

Players are instructed to refrain from high-fiving teammates. That one will be tough to enforce.

Oh, and there’s this: Sunflower seeds are banned from the Jenks complex.

“That limits the spitting,” Gibson explained.

The plate umpire isn’t actually behind the plate. He or she calls balls and strikes from a vantage point behind the pitcher.

Of spectator conduct and distancing, Gibson’s report Friday night was sensational: “Everybody did everything right. Everyone seemed so happy to be at the ballpark. It was a great first night.”

For the time being, teams are forbidden from engaging in the traditional postgame handshake line. Instead, at game’s end, one team lines up on the first-base side while the opponent assembles on the third-base line. In unison, all players tip their caps to the opposition. It’s a very cool substitute for the postgame handshake exchange.

The Little League season was scheduled for an April 1 start. Now, league official Steve Skocik said, “we’re hoping for a June start. We want the parents to feel comfortable. You go from being locked in to being on a baseball field, and everybody is a little inhibited and cautious. We’re in no hurry.”

The same distancing and hygiene measures applied in Jenks will be applied at the Tulsa Little League fields, located at 61st Street and Yale Avenue. On Tuesday, one of those fields was used for an Oklahoma Bulls practice session.

The Bulls are a 13-and-under team with players from throughout the Tulsa area. An elite team like the Bulls usually would play at least 70 games during a schedule that would begin in early March. The Tuesday session was their first actual outdoor practice of the season.

As these kids had been stuck at home for two months, energy was at a high level. Execution at the plate was better than expected. Several boys blasted shots all over the park.

The Bulls’ coach is Parker Frazier, the Holland Hall head man. The Dutch’s high school season was canceled after only five games, so Frazier’s current focus is preparing for the Bulls for an Oklahoma City tournament this weekend.

“We were itching at the bit to get out here and play,” said Frazier, a former Bishop Kelley and Tulsa Drillers pitcher.

The Jenks tournament may have to cope with scattered weekend rain, but 98 teams are determined to get to the finish line of the first major event of the Tulsa youth baseball season.

While finalizing the Jenks schedule and logistics of the new normal for youth baseball, Gibson is working ahead on a Bixby tournament planned for next weekend.

Already, 92 teams are registered for that one.

“I’m trying to find more fields,” Gibson reports. “We want to take as many teams as we can.”

From a timing standpoint, the national shutdown of organized sports was especially cruel for the Metro Tulsa Soccer Club and several other area recreational clubs that serve young kids and teens.

In early March, the Metro Tulsa teen teams were able to compete in season-opening games. As it turned out, because the coronavirus shutdown extended to all team sports, there was no subsequent spring competition for Metro Tulsa teams at any age level.

Youth teams from Union, Owasso, Verdigris, Cleveland and Mannford currently are playing, but the Metro Tulsa spring season ultimately was canceled. More than 250 teams and 2,000 athletes would have been involved in games played at complexes in south Tulsa and near the intersection of 41st Street and U.S. 169.

A Metro Tulsa official indicated that registration for a fall season -- starting in early September and ending in early November -- soon will open.