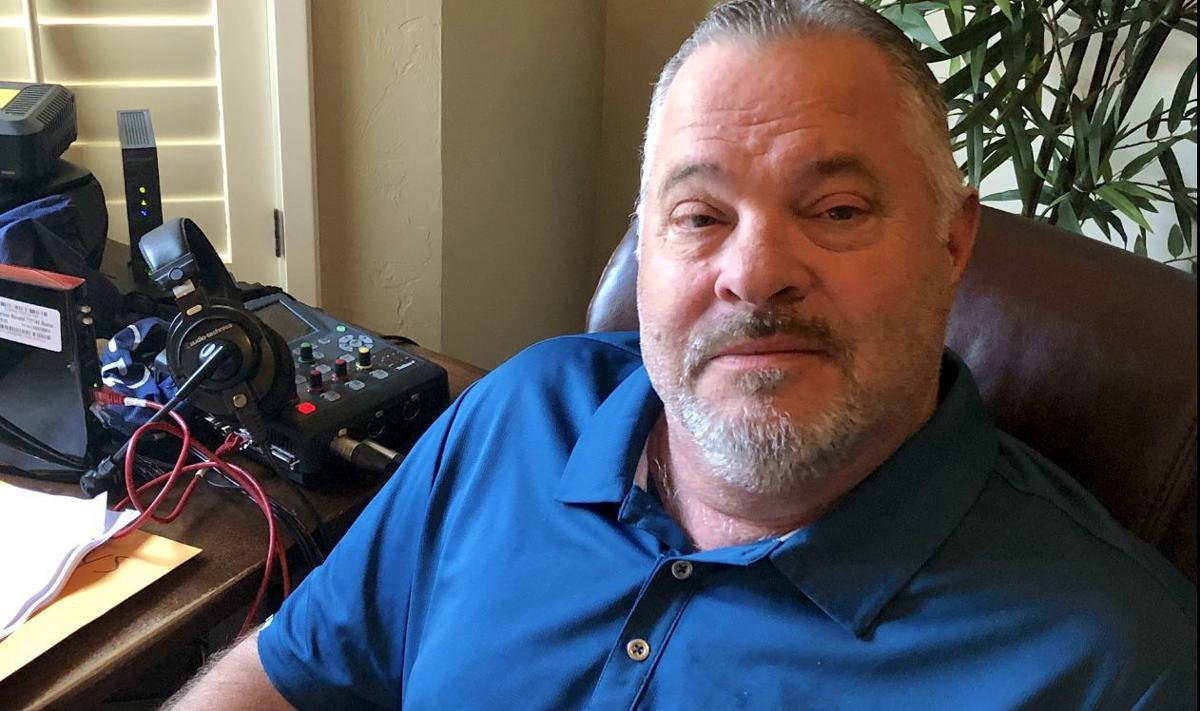 After becoming ill on May 25, Jim Traber underwent brain surgery. Less than a month later, he resumed work on his radio show. BILL HAISTEN/Tulsa World 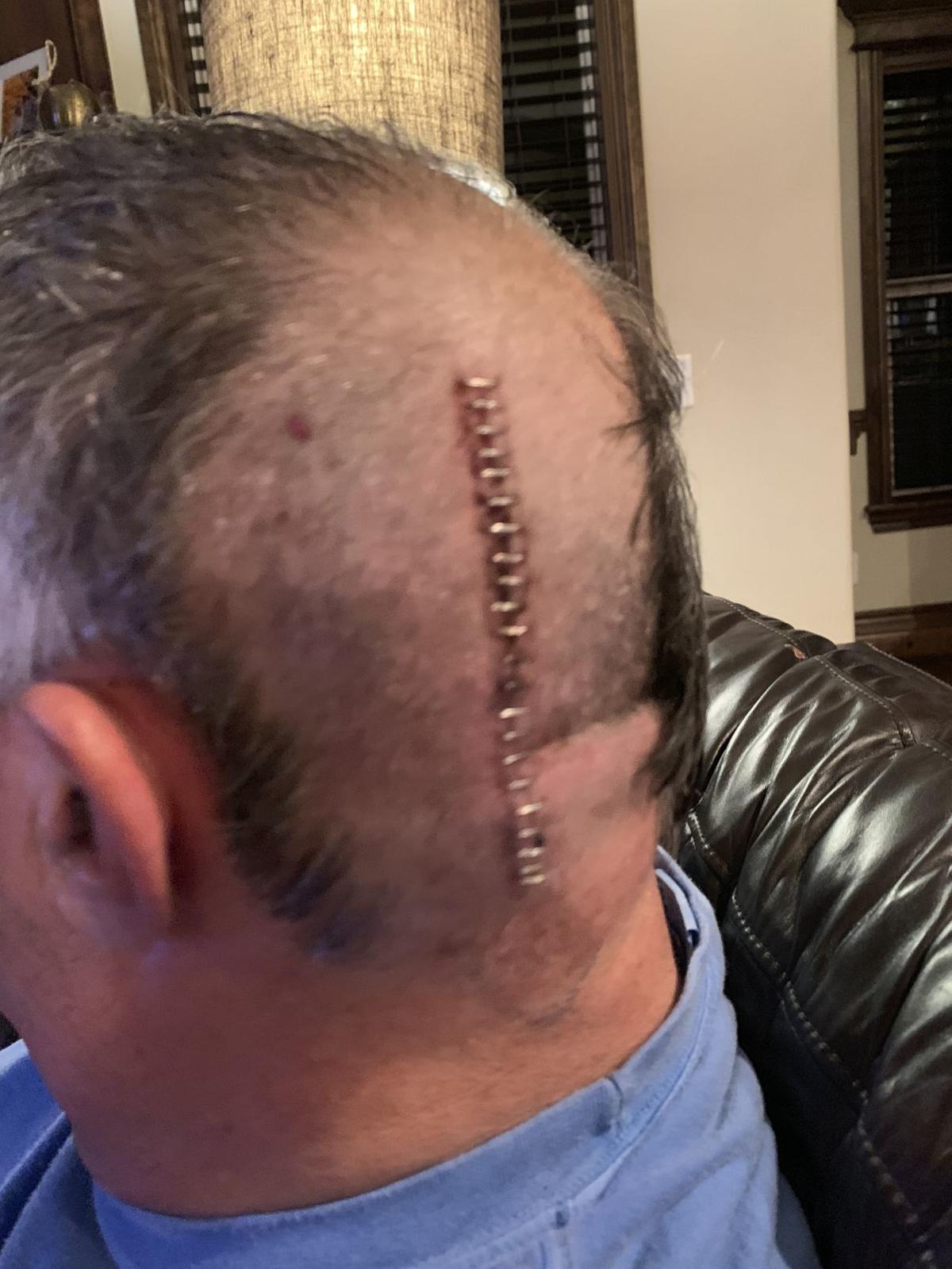 On May 29, Jim Traber underwent surgery for the removal of a benign brain tumor, leaving a 6-inch scar. Courtesy 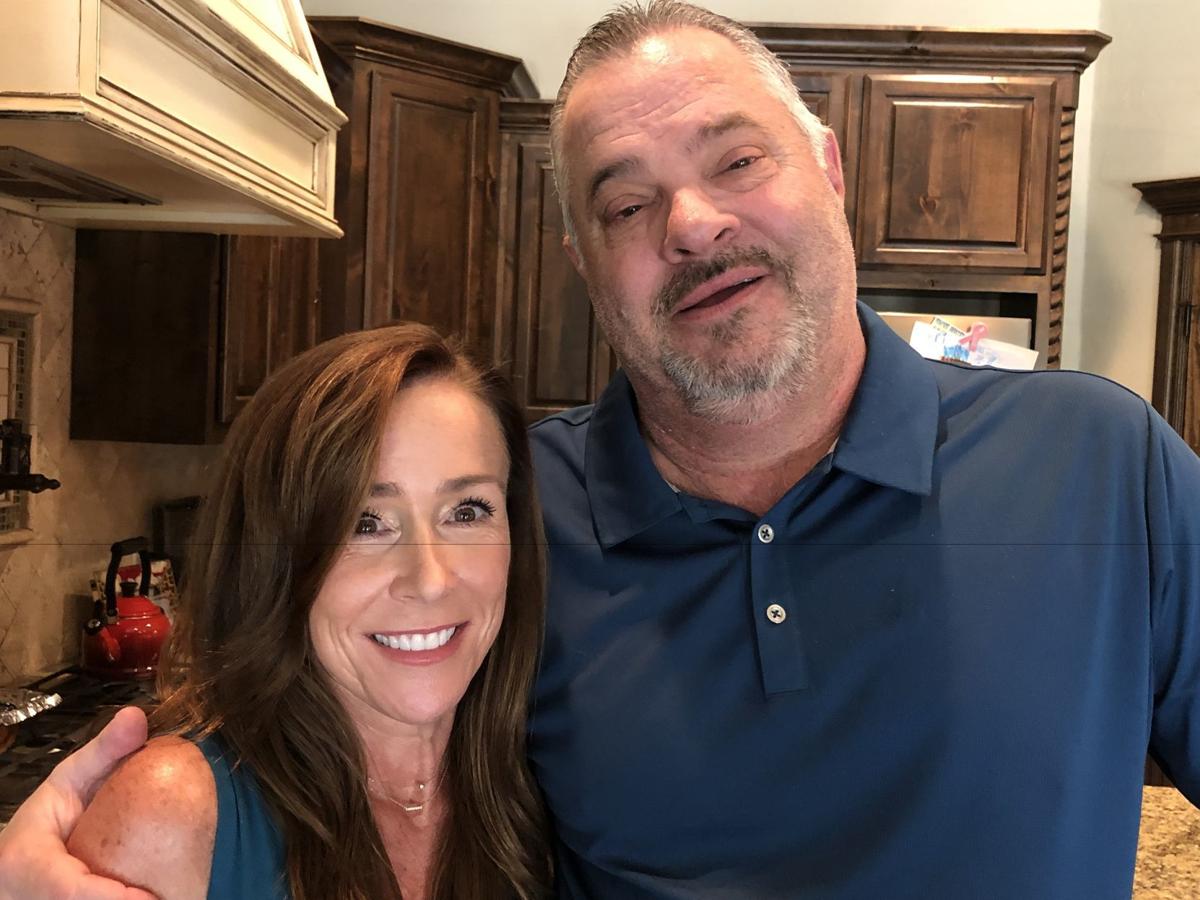 Julie and Jim Traber at their home in Edmond. As of December, the Trabers will have been married for 24 years. BILL HAISTEN/Tulsa World

After becoming ill on May 25, Jim Traber underwent brain surgery. Less than a month later, he resumed work on his radio show. BILL HAISTEN/Tulsa World

On May 29, Jim Traber underwent surgery for the removal of a benign brain tumor, leaving a 6-inch scar. Courtesy

Julie and Jim Traber at their home in Edmond. As of December, the Trabers will have been married for 24 years. BILL HAISTEN/Tulsa World

EDMOND — Not long after Jim Traber underwent a four-hour brain surgery on May 29, he was starving.

“I hadn’t eaten in five days,” he recalls. His wife, Julie, responded with a sausage, egg and cheese biscuit.

Traber devoured it. A healthy appetite was a positive sign.

Another sign that the occasionally irascible Traber is on the road to recovery and normalcy: He ended a recent exchange with an Oklahoma City Sports Animal caller by calling the guy a “fool” and a “stupid sissy.”

Traber’s most famous insult of callers is to refer to them as “yardbirds.”

Now, even as he has a fresh, 6-inch scar on the back of his head, Traber considers himself the luckiest man in Oklahoma.

During a period of about 24 hours on May 25-26, he and Julie weren’t sure whether he had sustained a stroke or a heart attack — or whether a cancer had spread to his brain, causing him to have headaches and, ultimately, to collapse during a poker tournament at the WinStar World Casino and Resort in Thackerville.

“May 25 is a day we’ll remember forever,” Traber said during an interview in his Edmond home last week.

Looking and seeming better than I expected, the 57-year-old Traber resumed radio work only three weeks after his surgery.

As it turned out, there was not a stroke or a heart attack or cancer. A benign tumor caused his seizure.

“This was going to happen sooner or later, no matter where I was at the time,” Traber said. “I just happened to be at the WinStar when it happened.”

During a Texas hold ’em event, Traber remembers having blurred vision from his right eye. He also remembers a statement from another man at his table: “You are having a seizure.”

Moments later, Traber was lying on the floor of the casino. Julie got a terrible phone call from a friend.

Forty-seven days later, the Trabers were seated together on the sofa, recounting and marveling at what transpired during the final week of May.

“I don’t gamble,” she explained. “I just find a place where I can read.”

Traber is well-known within Oklahoma’s tournament-poker culture. He’s an accomplished player and seems to be an expert on the subject. While hospitalized before surgery, Traber received a big-time flower arrangement from the Hard Rock.

For three weeks before he became ill at the WinStar, Traber had been bothered by headaches. He said the discomfort centered on the back of his head.

“I knew he didn’t feel good,” Julie said, “so on that Friday night, I told him, ‘Why don’t you just not go down there (on May 25)? You could stay home and relax. You’ve been pushing yourself too hard.’ ”

On May 25, Julie did not join Jim for the 140-mile drive from Edmond to the WinStar casino. She decided to stay home. During that Saturday afternoon, Jim had a nice run at the poker table.

“I’m rolling,” he texted to his wife.

Around 6 p.m., as Julie dined on takeout food and was about to watch a movie, she got the first call that her husband was in trouble.

“I don’t know what’s really happening,” a friend reported, “but Jim’s either had a stroke or a heart attack. They’re saying he’s unresponsive.”

Julie remembers her reaction: “This can’t be happening.”

She wound up making the 140-mile trip after all.

“I was told that (an ambulance) was 45 minutes away,” Julie said. “I thought, ‘If he’s had a stroke or a heart attack, he’s not going to make it.’ I was pretty emotional. I asked a friend in Norman to meet me and drive me to WinStar.”

About an hour later, there was another call.

“This probably was a seizure,” Julie was told.

“At least, she knew I wasn’t dead,” Traber said last week. “A lot of other people got text messages saying that I had died.”

Traber was transported to an Ardmore hospital. A brain scan revealed an extreme irregularity.

The plan was for a helicopter to take Traber to Oklahoma City, but the state was rocked by violent weather during the evening of May 25. The sky was too unstable for helicopter flight, so it was 4 a.m. before Traber was checked into Mercy Hospital in OKC.

For a few hours, Julie says, the Trabers feared that Jim had been stricken by a cancer that had invaded his brain.

“I was on some good drugs,” Jim explained. “It was as a surreal deal. That night, everything changed.”

That night, a specialist determined that Jim’s issue was a meningioma brain tumor. A benign tumor.

“(The specialist) told us, ‘This is the best-case scenario. It’s in the perfect location,’ ” Julie said. “I’m crying and hugging the doctor, and Jim wakes up and asks, ‘What’s going on?’ I told him, ‘You’re going to have brain surgery, but you’re not going to die.’ ”

Traber’s reaction: “You’re fired up because I’ve got to have brain surgery?”

Within a few seconds, he again was sleeping.

There was a delicate surgery on May 29, but the Trabers got the best possible result. Jim would live.

Traber and the Thunder

Traber for years has expressed an opinion that Russell Westbrook is incapable of leading an NBA team to a championship. During the operation, the surgeon wore a pair of Westbrook’s signature basketball shoes.

Two days later, he was released to go home. Three weeks later, he did radio again. His June 24 comeback show coincided with the annual Bob Barry Jr. memorial golf event in Oklahoma City. As nearly every participant listened on a smart phone, there were echoes of Traber’s show all over the golf course.

During the first few days after the surgery, several friends delivered homemade meals to the Trabers. Involved in the meal chain, Jim says, was Thunder general manager Sam Presti.

Traber has a history of being critical of Presti — and at one time suggested that a Presti firing would benefit the organization — but the Thunder organization responded to Traber’s plight by sending “a beautiful bunch of food,” Traber said.

“What a cool thing to do,” Traber said. “Only in Oklahoma.”

Said Julie: “Oklahoma people are the nicest in the world. It’s like living in Pleasantville.”

When Tiger Woods won the Masters in April, Traber was on the losing side of a bet— established in 2011 — that Woods would not win another major golf championship. At $200 apiece, Traber had bets with Animal co-workers Craig Humphreys and Mark Rodgers.

Within Traber’s show intro for years was his mention of the Tiger bets: “This is the greatest wager ever made by any human being ever on this planet or any other planet!”

For the Sports Animal network of stations, Traber has a statewide audience. He hosts “The Afternoon Sport Beat” for two hours (2-4 p.m.) and then collaborates with Al Eschbach from 4-6.

As Woods held on for his fifth Masters victory, “Jim Traber” was a trending topic on Twitter.

The next day, Traber paid Humphreys and Rodgers. Traber also attracted what might have been his biggest audience ever. During his April 15 show, there was a 558% increase above normal in the number of listeners who were connected online or by using the Animal app.

On Sept. 30, 1988, against the Toronto Blue Jays, he punched a two-out single in the ninth inning to end Dave Stieb’s bid for a no-hitter.

Traber is nicknamed “The Ultimate.” During his first radio work during the ’90s, he was introduced each day as having “the ultimate sports mind.” Eventually, “The Ultimate” became a nickname that stuck.

For the time being, Traber does his shows from the office of his home. When he needs to be at a remote location — like a car dealership — he uses Uber transport.

Because he was a seizure patient, Traber legally is banned from driving until December at the earliest. If there isn’t another seizure within six months of the May 25 incident, he’ll be cleared to drive.

Traber is the veteran of several major health issues and surgeries, but, he says, this most recent episode set the bar much higher for having been so unsettling.

“I can’t believe how incredibly blessed I’ve been,” Traber said at the conclusion of our interview, after which he began to prepare for four more hours of live sports talk.