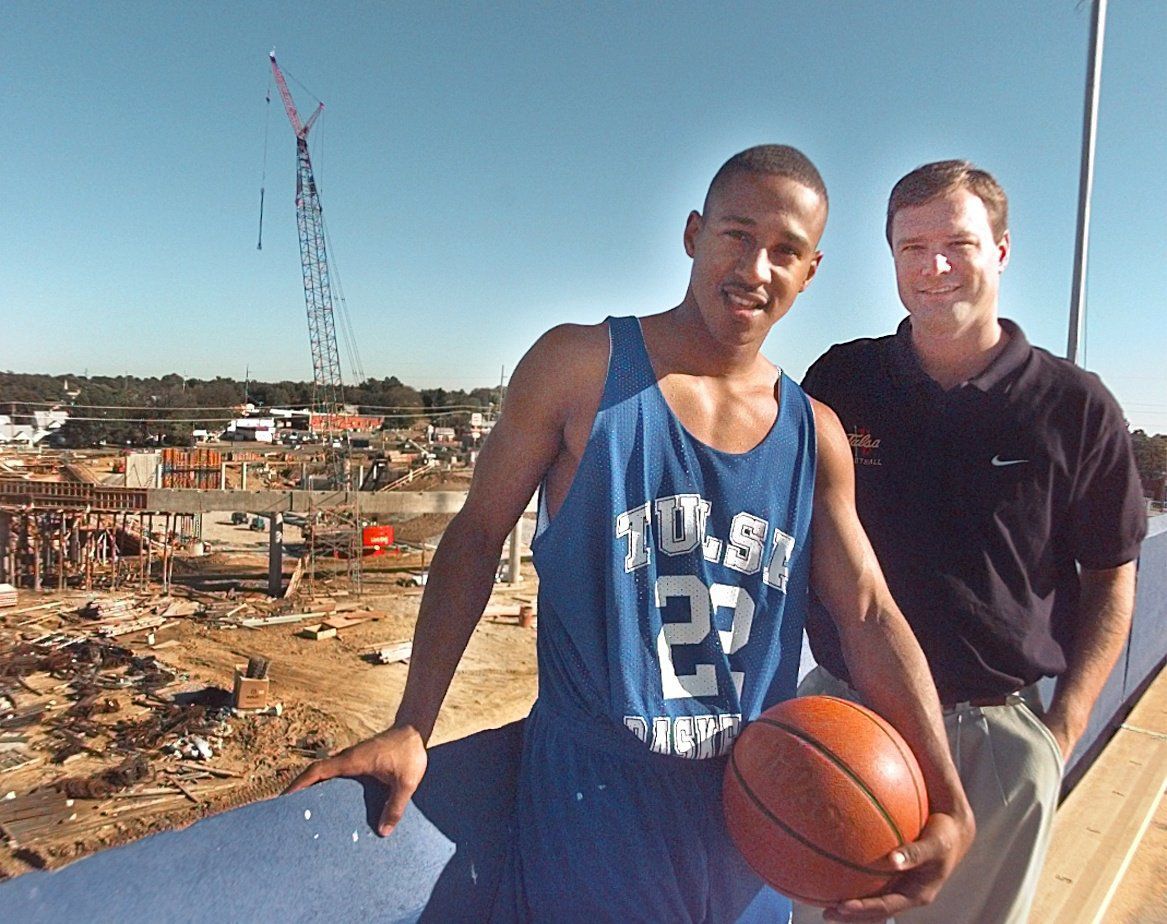 Bill Self’s relationship with the Thompson family began when Self was TU’s first-year coach and Rod Thompson was his point guard. They are shown in October 1997, with TU’s Reynolds Center under construction. STEPHEN PINGRY/Tulsa World file 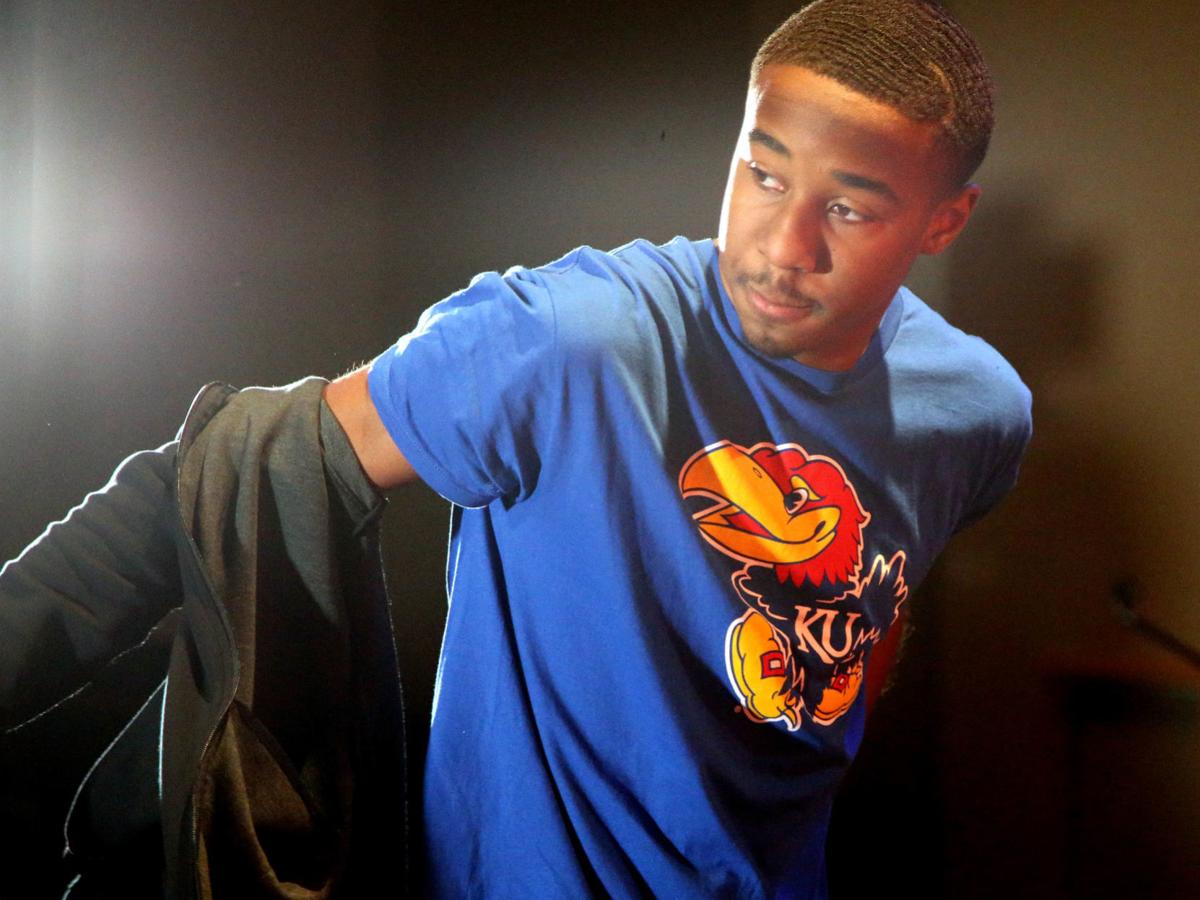 Booker T. Washington basketball player Bryce Thompson takes off a jacket to reveal a University of Kansas T-shirt after announcing his commitment to the Jayhawks on Tuesday. MATT BARNARD/Tulsa World

Bill Self’s relationship with the Thompson family began when Self was TU’s first-year coach and Rod Thompson was his point guard. They are shown in October 1997, with TU’s Reynolds Center under construction. STEPHEN PINGRY/Tulsa World file

Booker T. Washington basketball player Bryce Thompson takes off a jacket to reveal a University of Kansas T-shirt after announcing his commitment to the Jayhawks on Tuesday. MATT BARNARD/Tulsa World

Why I picked Kansas: Five-star recruit Bryce Thompson explains his decision to join the Jayhawks

Bill Haisten: Bryce Thompson’s rise began when he set his alarm for 5 a.m.

A handful of people knew for two weeks the 6-foot-4 Thompson had chosen the Jayhawks over Oklahoma State, Oklahoma and North Carolina, but 99% of those in the auditorium and 99% of those who watched CBS’ live stream weren’t aware of the Thompson decision until he unzipped a jacket to reveal a Kansas T-shirt.

Until 30 minutes before the ceremony, Kansas coach Bill Self also didn’t know.

Thompson’s recruiting experience began two years ago and crested Tuesday. In effect, though, it ended during a father-and-son exchange in the Thompsons’ living room.

This was the real moment of truth: As Bryce occupied one sofa and his dad, Rod Thompson, rested on another, Rod turned to his son and casually asked, “So, what are you going to do?”

Rod really wasn’t fishing for a definitive response, but he got one.

It was unexpected and abrupt, but the decision seems Rock Chalk solid.

For Bryce Thompson, there was the option of waiting until April to sign his letter of intent. The extra time would have given the Thompsons a chance to monitor NCAA-Kansas developments. In September, Kansas received from the NCAA a notice of rules-violations allegations.

There was no waiting. On Wednesday night, the official Kansas basketball Twitter account announced that Thompson had submitted a signed letter.

In the “Why I picked Kansas” first-person piece written by Bryce Thompson and Eric Bailey for the Tulsa World, he addressed the NCAA-Kansas situation: “I am aware of the controversy currently surrounding Kansas. It did concern me a bit at the beginning, until I went on my visit and I was able to talk face-to-face with some of the administration, including athletic director Jeff Long.”

This Bryce-Kansas process did not begin a few months ago. It began in 1997 — five years before he was born.

It began with the University of Tulsa’s 1997 midsummer hiring of basketball coach Bill Self.

When Self was at Oral Roberts in 1993-97, he attempted to sign Rod Thompson out of Beggs High School. Rod decided to attend junior college before signing with Tubby Smith and the University of Tulsa. Smith departed for Georgia. Rod played two seasons for Smith’s successor, Steve Robinson.

After Robinson left for Florida State, Self got the Tulsa job and inherited Rod Thompson as his point guard.

“You can’t run from me now, Thompson,” Self said during his first TU practice session.

“Bill was a players’ coach,” Rod recalls, “but he was intense. He rode you hard and barked at you pretty good. But you could tell that he had something about him.”

After Rod Thompson concluded his TU run, he and Self developed a permanent friendship. It was a factor in Self having gained the trust of Rod and his wife, Goldie, but this whole thing was deeply rooted in relationships.

Pooh Williamson now is an OU assistant. Williamson was Thompson’s predecessor at TU’s point-guard position, and they’ve been friends since they were little guys in Beggs.

Robinson now is a North Carolina assistant. He and Rod Thompson have sustained a relationship for more than 20 years.

OSU’s Mike Boynton did not have a history with the Thompsons, but he and assistant Scott Sutton were a constant presence at Booker T.’s Nathan E. Harris Field House since Bryce was a sophomore.

Also, there is this: Bryce’s maternal grandfather Marshall Rogers played for one season — in 1972-73 — for coach Ted Owens at Kansas. Rogers finished his college career at Texas-Pan American, where as a senior he led the nation in scoring at 36.8 points per game.

People skills are among the reasons Self is a member of the Naismith Memorial Basketball Hall of Fame, and he won this Bryce Thompson recruiting competition in spite of the weight of an ongoing controversy.

In part because Rod Thompson had a positive experience as Self’s point guard and Self’s friend, Self scored a statement recruiting victory and for the first time will have coached the son of one of his former players.

Now that high school football and the holidays are past us, it's time to catch you up on high school basketball. We're only a little more than…