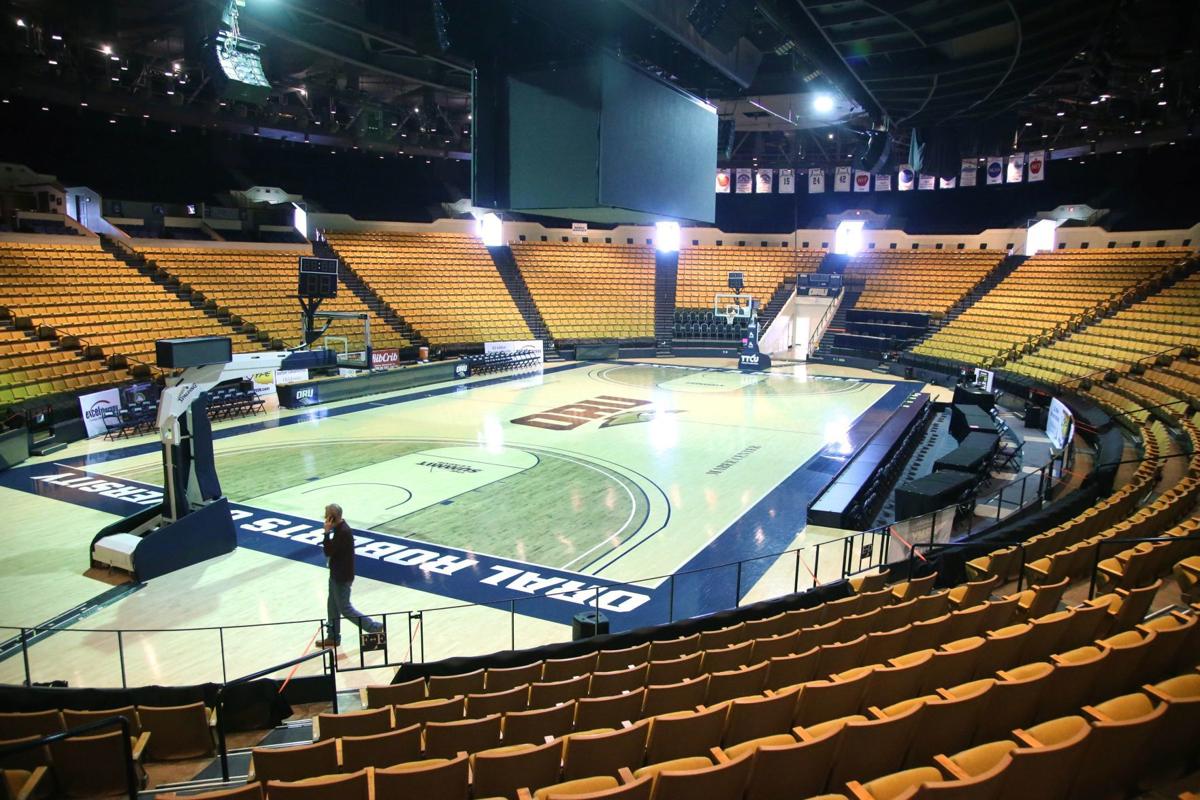 An empty Mabee Center is pictured on March 12. State quarterfinal basketball games were scheduled for that date, but the OSSAA postponed and eventually canceled the state tournaments because of the coronavirus threat. MATT BARNARD/Tulsa World file 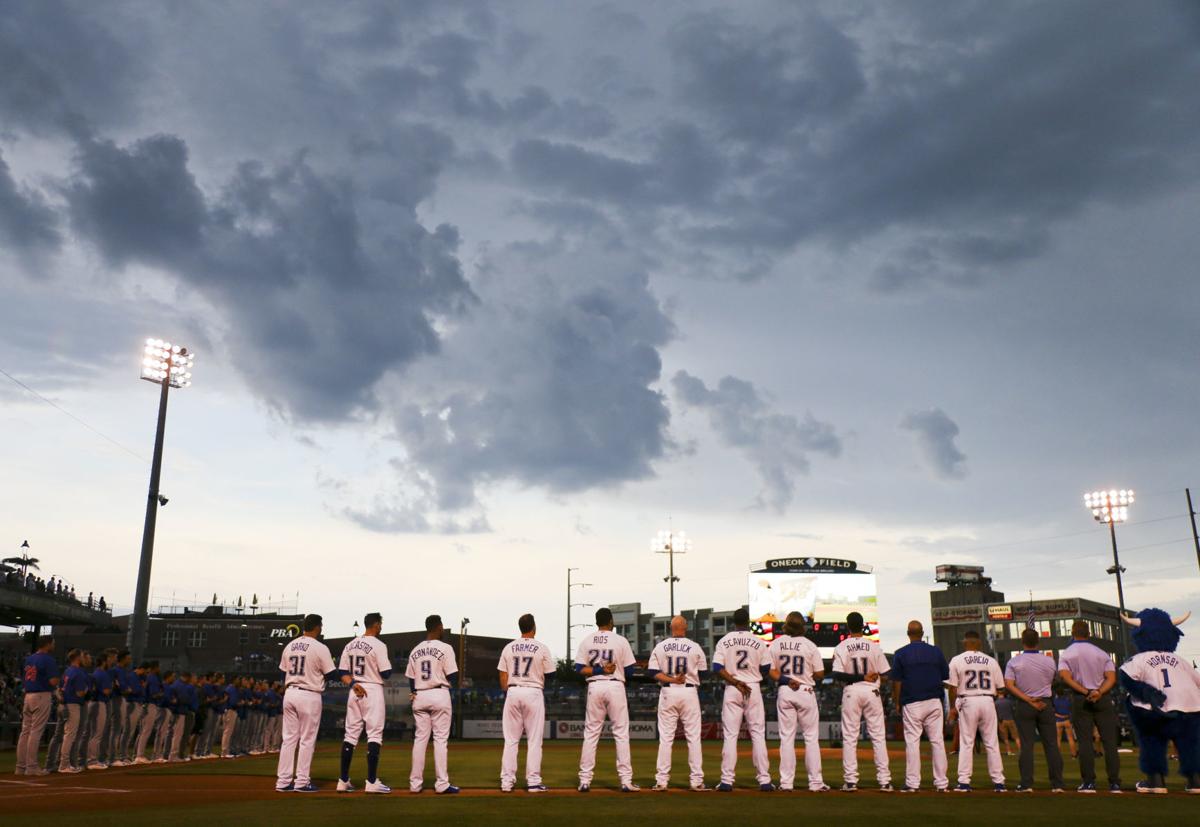 The Tulsa Drillers were supposed to host the Arkansas Travelers at ONEOK Field on Saturday night for their 69th game of the season. Instead, because of the coronavirus, the Dillers have not taken the field this season. Tulsa World file

An empty Mabee Center is pictured on March 12. State quarterfinal basketball games were scheduled for that date, but the OSSAA postponed and eventually canceled the state tournaments because of the coronavirus threat. MATT BARNARD/Tulsa World file

The Tulsa Drillers were supposed to host the Arkansas Travelers at ONEOK Field on Saturday night for their 69th game of the season. Instead, because of the coronavirus, the Dillers have not taken the field this season. Tulsa World file

In mid-March, only one week into the shutdown of just about everything we know and love, KJRH-2’s Cayden McFarland discussed his new normal: anchoring sports reports from his living room instead of his television station’s studio.

“If we get eight weeks of this,” McFarland asked, “can you imagine what everything will be like?”

McFarland was referring to the potential for staggering unemployment figures, for business closings, for the development of a terrifying health crisis and for the heavy impact on mental health.

In mid-March, of course, there was a collective feeling that eight weeks of the coronavirus impact would be unbearable and that bread, ground beef and toilet paper might permanently be in short supply.

Now, we’re beyond 14 weeks of this. Friday was Day No. 100 of the shutdown of most of Oklahoma and national sports activities. The PGA Tour has resumed its tournament schedule, but participation and television viewing are surreal because there are no spectators.

Our everyday conversations now include terms like “contact tracing,” “flattening the curve,” “pandemic,” “quarantine” and “shelter in place.” Before March, how many Tulsans had heard of Bruce Dart or Dr. Fauci?

As we soon roll into July, the Tulsa Drillers still have not played baseball.

There is the hope that we’ll have a high school football season.

There is the expectation that NFL and college football will be played, but on an almost daily basis there are deflating reports that some of the returning college athletes have tested positive for the coronavirus.

If the season does begin and scores of players wind up testing positive, college football decision-makers might put a stop to everything. It could result in a cancellation of 2020 college football or, because these schools so desperately need the television revenue that results from playing games even in mostly or totally empty stadiums, a postponement until after Christmas.

From defending champion LSU, there was the Saturday report that 30 players are isolated after having tested positive.

What is your level of confidence that the Sooners, Cowboys and Golden Hurricane start the season on time and get to the finish line without setbacks?

It feels really unlikely to me, but that could be the result of having been disappointed so many times since March. I’m now conditioned to expect the worst. Psychologically, it’s a terrible place to be.

For Oklahomans, the COVID-19 threat became real when it touched our sports culture. On a local and national basis, it all started on March 11, at Oklahoma City’s Chesapeake Energy Arena, when the Thunder’s meeting with Utah was canceled because it was learned that Jazz center Rudy Gobert had tested positive for the virus.

Over the next couple of weeks, there was the historic flurry of unbelievable cancellations: There would be no Oklahoma state high school basketball tournaments or spring sports, no NCAA Tournament basketball for the women or the men, and no more spring football practice for the Oklahoma college programs.

A 100-day hole was blown into the most satisfying Thunder season since Kevin Durant departed in 2016.

Nearly everyone I’ve interviewed since March has been damaged by the shutdown.

I’ll never forget talking with Rogers State basketball coach Justin Barkley on March 12, only minutes after he’d been told that the NCAA Division II championship tournament was canceled. He and the Hillcats were on a bus near Kansas City, bound for the tournament site in Maryvale, Missouri, when Barkley opened a bad-news email.

When Barkley called to provide the update, he sounded devastated. Rogers State would have made its first appearance in the Division II tournament.

March 12 was doubly brutal for Booker T. Washington’s Bryce Thompson. First, he learned that there would be no Class 6A tournament for him and the defending champion Hornets. A few hours later, he was informed that the April 1 McDonald’s All-American game in Houston was canceled.

Thompson would have been Oklahoma’s 10th representative in the nationally televised McDonald’s showcase.

On May 22, I spoke by telephone with Drillers general manager Mike Melega. We talked at 5 p.m. — around the time that fans typically would start to arrive for a Friday night game against Corpus Christi. It should have been the Drillers’ most lucrative weekend of the year — three home games during the Memorial Day weekend.

Instead, as Melega and I talked and as he expressed hope for MLB officials and players to agree on a 2020 format that finally would result in the start of Double-A baseball, he was the only person at the ballpark. During a spring of mostly great Tulsa weather, beautiful ONEOK Field was empty. It still is.

On Saturday night, the Drillers were scheduled to have hosted Arkansas. It would have been Tulsa’s 69th game of the season.

If any single quote could be framed and saved as the defining comment of these 100 days, it would be this one provided in April by OU athletic director Joe Castiglione.

“This is way beyond anybody’s imagination,” he said before comparing the coronavirus experience to the plot of a sci-fi/horror film.

“We’re enthralled by the storyline, the cinematography, the drama and whatever emotions get invoked,” Castiglione said. “Then the movie would end and you would get up and walk out of the theater and realize it was quite a story, but it was just a movie.

A shocking March in Oklahoma sports

A review of the flurry of cancellations that jarred Oklahoma athletes, coaches and sports fans in March:

March 11: As it was learned that Jazz center Rudy Gobert had tested positive for the coronavirus, and only a few seconds before what would have been the opening tip-off, the Utah-Oklahoma City game was postponed. Less than an hour later, there was a shocking statement: “The NBA is suspending game play following the conclusion of (Wednesday’s) schedule of games until further notice.”

March 12: Even as several teams already had arrived at the Mabee Center, ready to play state quarterfinal games, the Oklahoma Secondary School Activities Association postponed all basketball scheduled for the weekend.

March 12: As the Rogers State Hillcats basketball team traveled by bus to Maryvale, Missouri -- the site of the NCAA Division II national tournament -- coach Justin Barkley received an email informing him that the event had been canceled. Rogers State would have made its first appearance in the Division II championship.

March 12: An unbelievable statement was released by the NCAA: “Today, NCAA President Mark Emmert and the Board of Governors canceled the Division I men’s and women’s 2020 basketball tournaments, as well as all remaining winter and spring NCAA championships.”

March 14: Instead of state championship high school basketball games at the Mabee Center and a Big 12 Tournament championship game in Kansas City, Missouri, there was nothing. It was the first weekend during which most live sports had been shut down.

March 18: Special Olympics Oklahoma officials announced the cancellation of the 2020 Summer Games, which had been scheduled for May 13-15.

March 20: Before the rest of the Cowboy baseball season was canceled, this was the date on which Oklahoma State was scheduled to play for the first time at its new, $67 million ballpark. Former President George W. Bush would have thrown the ceremonial first pitch.

March 26: After having been hopeful that postponed state basketball tournaments could be played, the OSSAA announced that all basketball had been canceled. Additionally, there was the official cancellation of all OSSAA-sponsored activities for the remainder of the academic year.