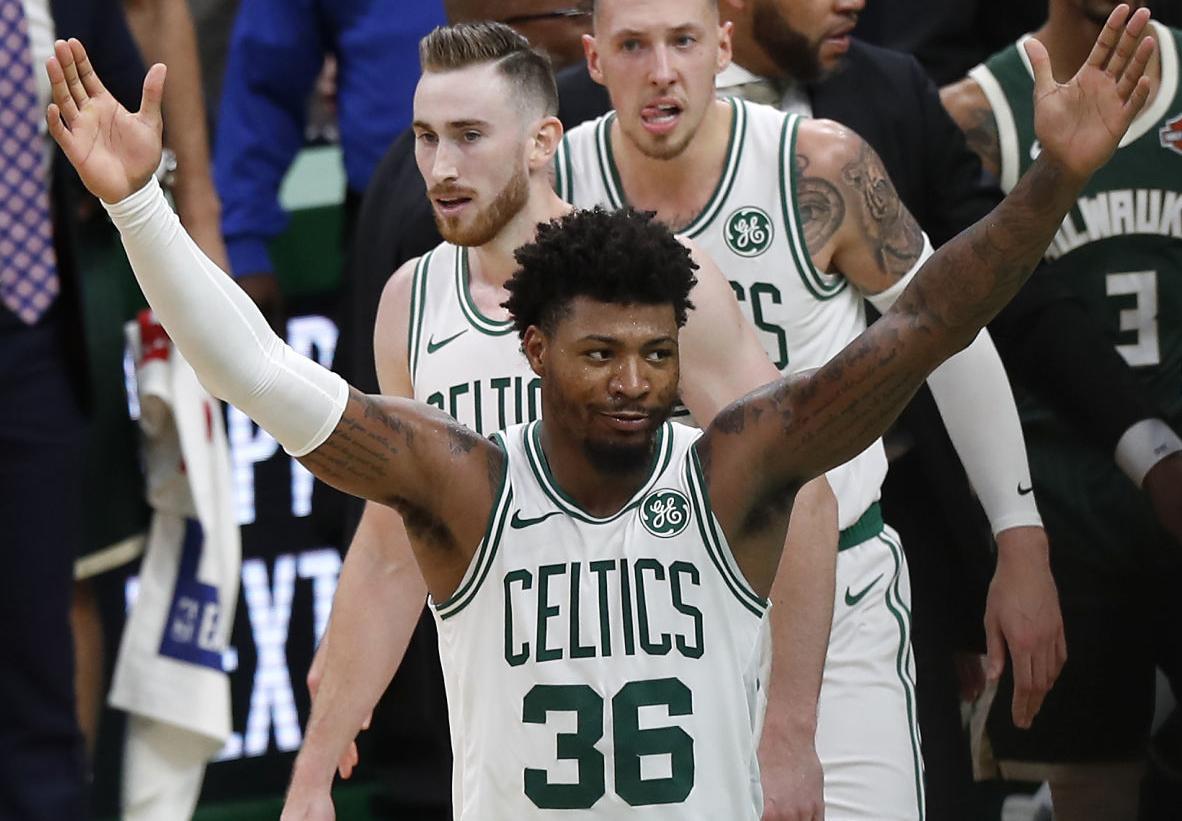 As the sixth pick in the 2014 NBA draft, former Oklahoma State star Marcus Smart has spent his entire NBA career with the Boston Celtics. 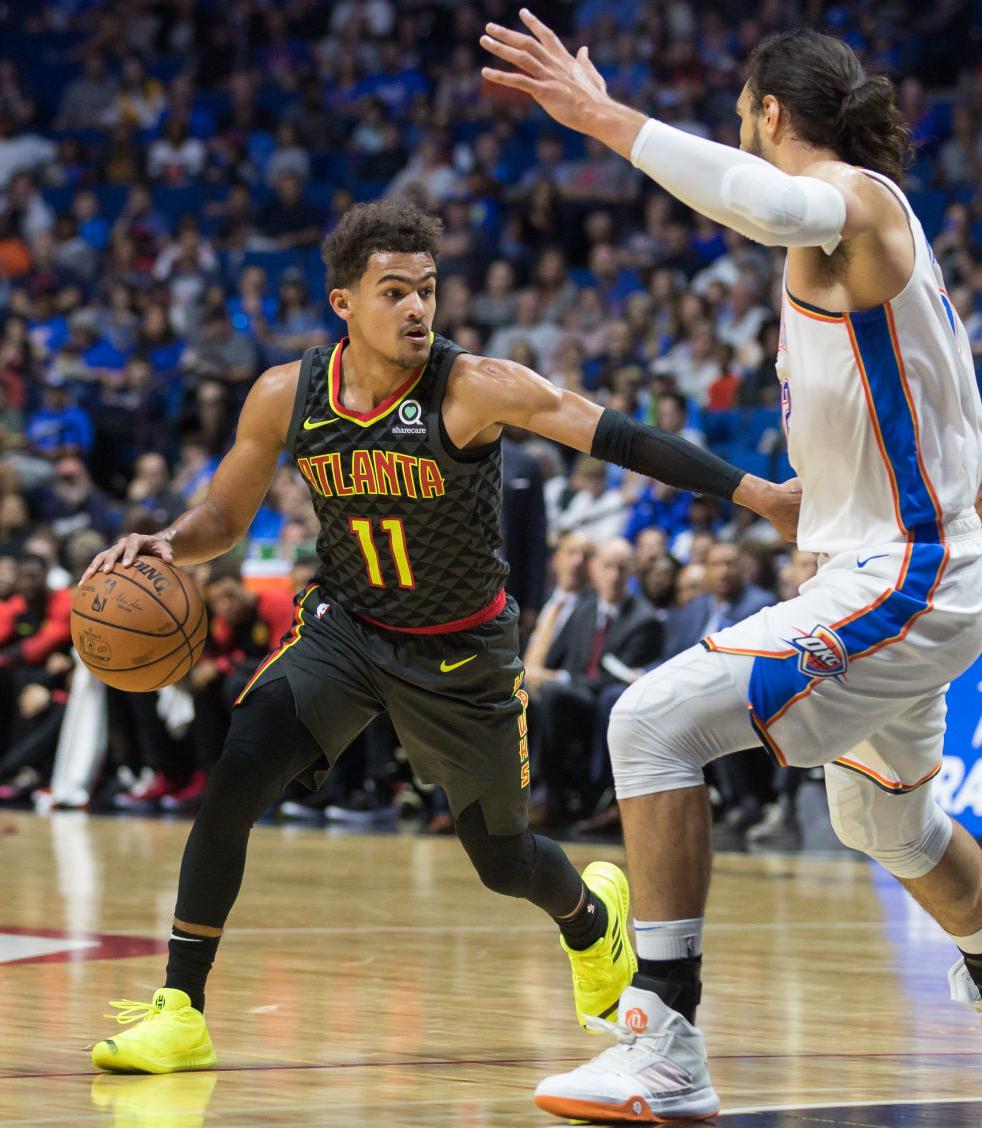 Atlanta Hawks guard Trae Young, shown here being defended against by OKC Thunder center Steven Adams, is a starter in Sunday’s NBA All-Star Game at Chicago. Two seasons ago, Young was an All-American at OU. BRETT ROJO/for the Tulsa World 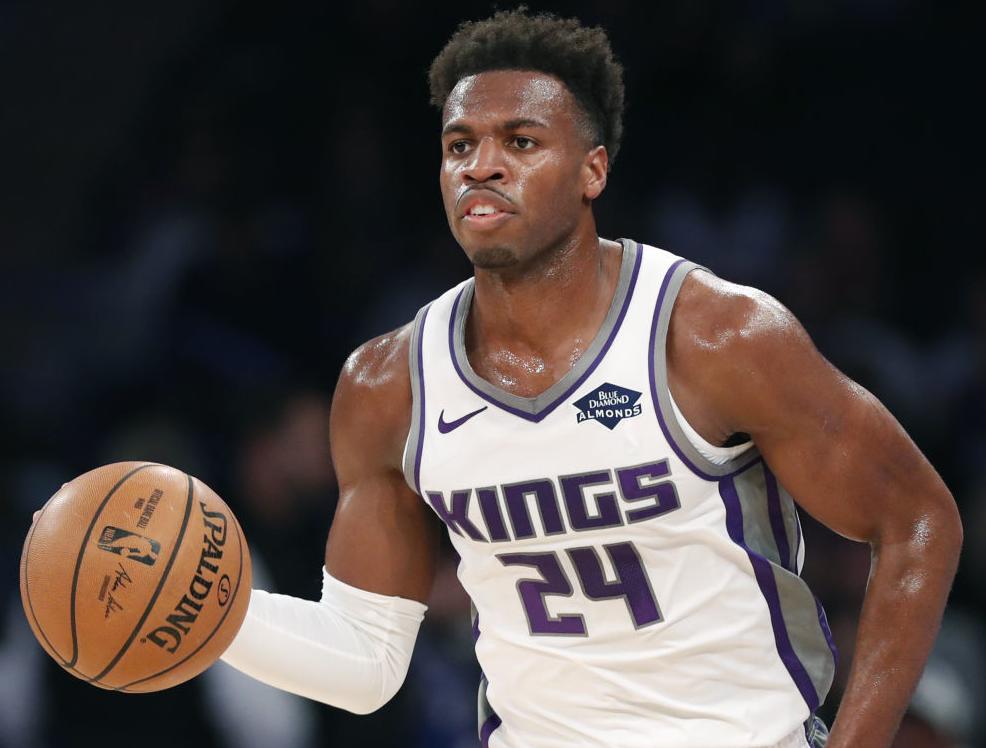 Now a fourth-year guard in Sacramento, former OU star Buddy Hield leads the Kings in scoring at 20.5 points per game.

As the sixth pick in the 2014 NBA draft, former Oklahoma State star Marcus Smart has spent his entire NBA career with the Boston Celtics.

Atlanta Hawks guard Trae Young, shown here being defended against by OKC Thunder center Steven Adams, is a starter in Sunday’s NBA All-Star Game at Chicago. Two seasons ago, Young was an All-American at OU. BRETT ROJO/for the Tulsa World

Now a fourth-year guard in Sacramento, former OU star Buddy Hield leads the Kings in scoring at 20.5 points per game.

As the Oklahoma City Thunder possessed the basketball, trailing by three points on its home floor — and with a history this season of clutch fourth-quarter finishes — former OSU Cowboy Marcus Smart made a great defensive play and secured a big road win for the Boston Celtics.

This Sunday in Chicago, former Norman North phenom and former OU Sooner All-American Trae Young is a starter in the NBA All-Star Game.

Another former Sooner, Buddy Hield, is among the NBA’s better gunners from 3-point range and leads the Sacramento Kings in scoring.

The college performances of Smart, Young and Hield should be remembered fondly by fans of the Bedlam schools. Otherwise, the 2010-19 decade mostly was a dud for Oklahoma college basketball.

In Oklahoma, it wasn’t that long ago that NCAA Tournament appearances were more common than football bowl-game appearances.

During the ’90s, OU, OSU and TU combined for 19 March Madness appearances while sending their football teams to only six bowl games.

That stat has been flipped.

In 2010-19, OU, OSU and Tulsa were involved in 25 bowl games. For their basketball programs, there were a combined 13 NCAA Tournament appearances — but not much in the way of actually winning in NCAA Tournament games: Tulsa was 0-for-2 and Oklahoma State 0-for-5.

If not for the Sooners, 2010-19 would have been really bleak. OU reached the Sweet Sixteen in 2015, the Final Four in 2016 and recorded a first-round victory last year.

Led by Hield, that year’s Wooden Award recipient, the 2016 Sooners were 29-8. Getting to a Final Four should be celebrated forever. Being at that particular Final Four probably isn’t a treasured memory for Lon Kruger, for his players or for the fans who trucked to Houston and paid premium prices to witness a historic beatdown.

In a semifinal, OU was dealt a 95-51 loss by eventual national champion Villanova. The 44-point final margin remains the greatest in Final Four history.

It’s better to center 2010-19 Oklahoma college basketball memories not on the lack of overall team achievement, but on three players — Smart, Hield and Young — who were dynamic Big 12 players and now flourish as professionals.

When I first saw Young play, he was a Norman North senior. His scoring was interesting, but his passing was incredible.

After watching Young score 44 points at Edmond North, this was my assessment of his game: “He seems to have been born with four lungs. He played every minute of an intense contest, and there was not even the slightest hint of fatigue until the fourth quarter — after he had contended with multiple defenders all night. His offensive creativity and dribble speed are fantastic.”

However, because Young is a smaller point guard, I didn’t expect him to average 27.4 points during OU’s 2017-18 season (but he did) and certainly never dreamed that he’d be among the NBA’s leading scorers (but he is with a current average of 29.7 points for the Atlanta Hawks).

Young was the fifth pick overall in the 2018 NBA draft. Hield was the sixth pick in 2016, taken by the New Orleans Pelicans (who traded him to Sacramento during his rookie season).

After having been the Big 12 Player of the Year in 2013, Smart was the sixth pick in the 2014 draft. He has spent his entire career with Celtics. His career averages of 9.6 points and 3.5 rebounds don’t begin to explain his value.

Smart’s victory-clinching steal at OKC resulted in postgame discussion that he should be considered for the NBA’s Defensive Player of the Year award. Last season, for the first time, he was a member of the five-man All-Defensive team.

Against Phoenix on Jan. 18, Smart totaled career-high totals of 37 points and 11 3-point baskets. More typically, though, he makes the type of game-changing defensive plays like the one against the Thunder last weekend.

“Those are winning plays,” NBATV analyst Isiah Thomas said, “and that’s why (Smart) is a great Celtic.”

Dave Hunziker has been OSU’s play-by-play voice since 2001. When asked to identify the top five Cowboys of the Hunziker era, he fairly immediately responded with Tony Allen, Joey Graham, James Anderson, John Lucas and Smart.

“Marcus was perhaps the most fierce competitor that I’ve covered in any sport at OSU,” Hunziker explained. “He wanted to win every possession of every game. If he sensed any weakness in his opponent — even at (Kansas’) Allen Fieldhouse — he would crush you.

“Then you add his incredible athleticism and strength, and you have a very unique player who could guard anyone.”

It feels like it’s been a long time since Smart played at Oklahoma State, but he’s only 25. He turns 26 next month.

As today’s Cowboys are 1-9 in Big 12 play, and as today’s Sooners are treading water at 5-5, there should be a heightened appreciation of the NBA careers of Smart, Hield and Young. Fans should be mindful also that spring football begins in a few weeks.